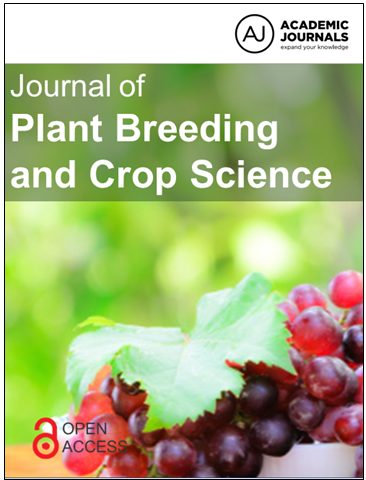 Coconut (Cocos nucifera L.), is an oleaginous, monocotyledonous plant from Arecaceae family (Teulat et al., 2000) and cultivated in wet tropical area. Coconut is used like food plant in many countries and is supplier of fatty acid to oil industry. In the Côte d’Ivoire economy, coconut palm is a very important speculation to reduce poverty at the littoral. In this area more than 20 000 families depend to coconut farming (Assa et al., 2006). In 2017, the area under coconut in Côte d’Ivoire was 103 239 ha (FAOSTAT, 2017). To sustain coconut sector, the researchers created improved coconut varieties. Coconut breeding program started by the mass selection of the best individuals from local ecotype West African Tall (WAT) (Bourdeix, 1988) that produced an average of 0.6 ton of coprah ha-1 year-1. So, annual coprah output reached 1.2 ton/ha. In the worry aim to increase the genetic gain at Côte d’Ivoire, breeders opted for the widening of the genetic basis by exotic coconut population introduction in field genebank in order to landing the inbreeding depression effect (Bourdeix, 1990). Thus, 37 accessions of the tall coconut populations and 16 populations of the dwarf were introduced from inter-tropical area between 1960 and 1980 (Fremond and De Nuce, 1971). Those coconut accessions which are conserved at field became old. The inflorescences located in foliar crown of the tall coconut palms that height exceeds 12 m become inaccessible (Bourdeix et al., 2010). Consequently, from 1987 the regeneration of aging accessions is regularly undertaken by controlled pollinated method (Konan et al., 2008) to carry out seed productions.

Today, agro-morphological diversity of the first generation cycle of regenerated accession of tall coconut palms planted in ICG-AIO located at Côte d’Ivoire is unknown. However, the knowledge of the agro-morphological traits about these regenerated accessions is important, not only for efficient management and conservation of coconut resources but also for pursue coconut breeding program in Côte d’Ivoire. Indeed, during regeneration of old coconut accession with controlled pollination method the risk of genetic diversity erosion seems to exist. Such modifications due to the artificial selection on the parental accession of plants were reported (Johnson et al., 2002; Reddy et al., 2006). In ICG-AIO, several chronological studies about agro-morphological characterization of the tall coconut accessions initially introduced were achieved (De Nuce and Wuidart, 1979; De Nuce and Wuidart, 1981; Sangaré et al., 1984; N’Cho et al., 1993; Konan, 2008) from varied quantitative descriptors (IPGRI, 1995). Basing of the multivariate analysis approaches the works of N’Cho et al. (1993) showed significant differences among seventeen tall coconut cultivars from 24 vegetative traits. Also, important morphological variability in coconut ecotypes coming from Pacific was found. Based on observations of seventeen morphological traits, Konan (2008) was classified tall coconut accessions in ICG-AIO under two groups. The first group is composed of the accessions of african origin and the Indian ocean. The second group consists of the accessions coming from South Pacific, the extreme Orient and Latin America.

However, these studies remain partial because they don't take into account the different generations of accessions in coconut field genebank. However, little information is available concerning morphological variation between and within first generation (G1) of tall coconut accessions planted in coconut genebank hosted by Marc Delorme research station in Côte d’Ivoire. Besides, during morphological diversity studies in coconut palms, the number and nature of the morphological descriptors used are varied. Considering the time that can take for the characterization of a high sample of accessions, COGENT recommended in 2007 a minimal list of 17 quantitative descriptors (www.bioversityinternational.org). Then, the reliability of this short list of agro-morphological descriptors for coconut diversity studies was proved in agro-climatic conditions of Côte d’Ivoire for survey about morphological diversity of coconut accessions hosted by Marc Delorme Research station of the Centre National de Recherche Agronomique (CNRA) (Yao et al., 2015).

The objective of the present study was to assess from this reliable short list for coconut descriptors established by the COGENT the relationships of morphological similarity among regenerated tall coconut accessions in ICG-AIO. 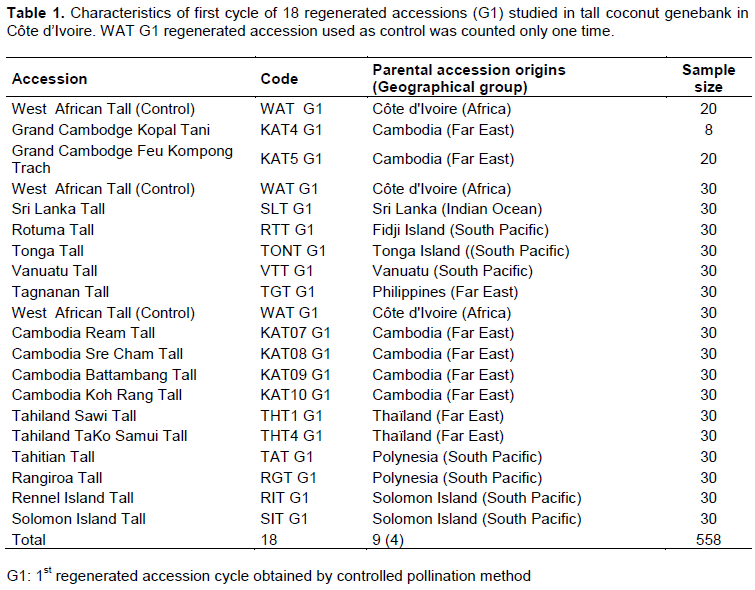 Experimental designs and assessment of the agro-morphological characters

The study was conducted on three plots for coconut genetic resources conservation. Coconut palms were planted with density of 143 trees ha-1. The experimental plots, No. 81 and No. 91, were conceived in Fisher blocks with 6 repetitions of 24 trees (4 rows of 6 trees). For these two plots, 5 healthy plants were selected randomly in each elementary plot, either a total of 30 trees per accession. The third plots No. 43 was planted in alternated rows design and the number of individuals sampled was varied from 8 to 20. In all plots, a total of 558 individuals were observed (Table 1). All observations were done from quantitative characters of the minimal list of coconut descriptors proposed by the COGENT (www.bioversityinternational.org) described in detail by Nuce and Wuidart (1982) and Yao et al. (2015). The morphological traits observed were 17 with breakdown of 4 stem, 2 floral, and 11 fruit traits.

Number of female flowers and number of spikelets were counted on inflorescence of rank n.10.

The relationships between regenerated tall coconut accessions were carried out by fours Multivariate analyses (MVA) methods (Karsai et al., 2000) using Statistica version 7.1 software (StatSoft France, 2005). Principal components analysis (PCA) was performed from the first two principal components were obtained. PCA is a data reduction method used to reduce the number of characters and to detect structure in the relationships between these characters. Cluster analysis (CA) was performed using Euclidean distance and an average fusion strategy (UPGMA) as indicators of similarity and aggregation procedure, respectively. The clusters were then represented in a dendrogram. The differences between groups established from CA were tested with Multivariate Analysis of Variance (MANOVA) at 5% threshold of likelihood. Discriminant analysis (DA) was done to determine morphological distances like Mahalanobis distances between defined clusters (Ivandro et al., 2014).

i weighted the weighted mean of the descriptor i,

Ci the mean of the WAT G1 control on all the plots studied for the descriptor i,

Cij the mean average of the descriptor i for the WAT G1 control in plot j.

KMO (Kaiser-Meyer-Olkin) index that was superior to 0.7 indicates that the factorization of the 17 studied characters is a statistically acceptable solution. In the same way the Bartlett sphericity test on all characters showed that the factorial model is appropriated (Chi-square = 478.89, p<0,001). So, the first three principal factors that presented an eight value superior to 1 following Kaizer method accounted for 70.48% of variation were implied in variability of the regenerated accessions of tall coconut palms (Table 2).

The factor 1 expressed 38.91% of the variation. It presented a positive correlation with FW, HNW, SW, WW, EW and CWN. The component 1 can be defined as factor characterized by fruit components. The factor 2 accounted 21.08% of the total variation. It was explained by the variables, SH and L11LS that there are correlated negatively and the variable NFF that there is correlated positively. The component 2 can be defined as vegetative growth factor. The character NBPY contributed to the formation of the component 3 accounted 10.48% of the total variation (Table 2). 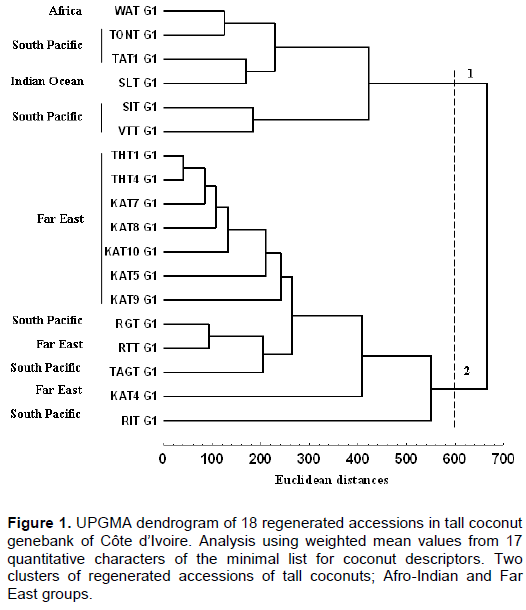 The difference between two majors groups according to agro-morphological characters used was significant following the multiple analysis of variance (MANOVA) at 5% likelihood (F = 8.08, p = 0.027). Data exam showed that this difference comes from 8 of the 17 characters analyzed (Table 3). These 8 characters that were essentially those describing the production such as fruit weight (FW), husked nut weight (HNW), shell weight (SW), water weight (WW), endosperm weight (EW), coprah weight per nut (CWN), dry meat oil content (DMOC) and number of fruit per palm per year (NFPY) were permitted a complete distinction of the two geographical clusters (Table 3). 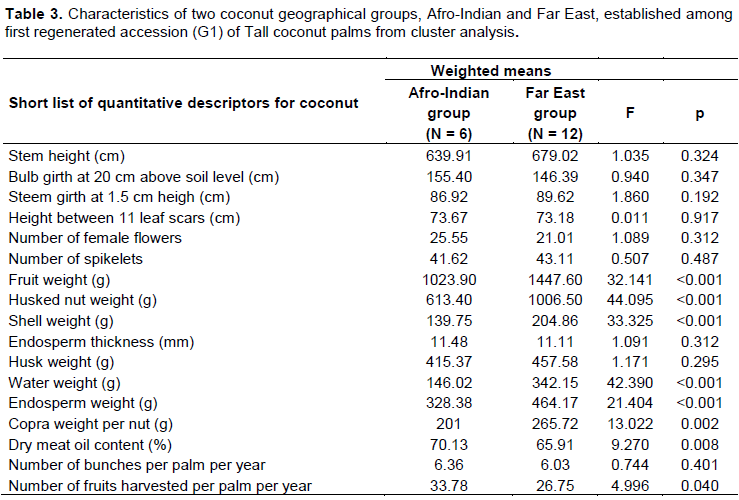 Lambda Wilks’test from discriminant analysis, associated to the hypothesis of equality of the middle vectors between two agro-morphological groups was significant at 5% likelihood (F = 0.234, p = 0.039). So the two major groups established from cluster analysis were different. Mahalanobis distance between two agro-morphological clusters (182.81 Mahalanobis units) was significant at 5%

Firstly, the studied morphological descriptors seem to discriminate tall coconut populations with the same level like foliar polyphenols markers (Jay et al., 1989) and the genetic markers such as RFLP (Lebrun et al., 1998) and SSR (Konan, 2008). These genetic markers were permitted in some cases to group in same way coconut populations hosted by international genebank at Côte d’Ivoire. These studies oppose an Afro-Indian cluster to another compound of the accessions that come from South Pacific, Far East and Latin America. The reliability of this tall coconut populations clustering would be due to biological data provide to fruit component descriptors and the weighting method in relation to fragmented means of WAT G1 control used. Indeed, the study of N’cho et al. (1993) achieved on the same origins of coconut populations used in absence of the fruit component descriptors and no correction of raw data by weighting method was generated less clean of tall coconut clustering in nine morphotypes. Using of the weighing method of raw mean data of each descriptor assessed on tall coconut accessions planted onto different plots in relation to fragmented means of WAT G1 control is minimized environment effects on characters expression (Bourdeix, 1989). Thus, the expression of the phenotypes due to the main effects of the genes has been only revealed.

Secondly, the morphological clustering of the first cycle (G1) of tall coconut accessions regenerated by controlled pollination method with the one of the initial introductions (G0) was conform (Konan, 2008). Indeed, the sexual reproduction involves by control pollinations between male and female individuals chosen as parents would protect the organisms against eventual mistakes of DNA replication (Guetet et al., 2008). That conferred to the regenerated accessions (G1) an adaptation to climatic change and modifications concerning soil chemical properties. According to Ivandro et al. (2014), genetic distance measures based on phenotypic characters are one of the main multivariate techniques used to provide criteria for choosing parents. Thus, the parental tall coconut accessions to choose in the crossings should belong to the two revealed groups. There is a high probability of selecting transgressive genotypes due to the occurrence of heterosis and the action of complementary dominant genes (Ivandro et al., 2014). Also, the morphological structure of the regenerated accessions was revealed that those whose parents come from South Pacific are the more varied as one reported by N’cho et al. (1993) and Sugimura et al. (1997) in coconut genebank of Côte d’Ivoire and Philippines respectively.