The experiment was conducted to assess associations between root yield and yield- related traits of orange-fleshed sweetpotato genotypes to identify traits that have maximum effect on root yield of sweetpotato to make possible selection. Twenty-four Orange Fleshed Sweetpotato genotypes were evaluated in 2017 main cropping season at Hawassa Agricultural Research Center using a Randomized Complete Block Design (RCBD) with three replications. Data were collected from 12 traits, and then subjected to analysis of variance (ANOVA), correlations and path coefficient analysis. The estimation of characters  associated revealed that storage root yield was positively and significantly associated with roots number per plant, root length, root girth, harvest index at both genotypic and phenotypic levels. Some of the traits showed a highly significant (p<0.01) positive genotypic and phenotypic correlations while the other traits showed significant negative correlations. The genotypic correlation coefficients were higher than phenotypic correlation coefficients in magnitude indicating fairly strong inherent association between the characters studied. Path analysis revealed that roots number per plant, root girth and harvest index had positive direct effects on storage root yield at both phenotypic and genotypic levels. Based on the results of current study, traits that showed a positive direct effect on storage root yield could be used as the best predictors of storage root yield in sweetpotato improvement program.

Orange fleshed sweetpotato [Ipomoea batatas (L.) Lam.]  is a rich source of β-carotene and has a large potential  in fighting against vitamin A deficiency (VAD) in human diet in developing countries (Chassy et al., 2008; Burri, 2011). Previous reports by WHO (2009) and Tsegaye et al. (2010)  indicated   that   VAD  is  a  serious  public  health problem happening mainly among children and women of childbearing age in Ethiopia. In this regard, orange- fleshed sweet potato (OFSP) is an invaluable crop for fighting against vitamin A deficiency in sub-Saharan Africa countries like Ethiopia (Tumwegamire et al., 2004; Low et al., 2009; Gurmu et al., 2015).  Storage  roots  are commonly the edible part of sweetpotato. Since the storage root yield is a complex trait with low heritability, it requires the knowledge on the nature and magnitude of correlations between important traits to make possible direct or indirect selection for improvement of the crop (Gurmu et al., 2017). In sweetpotato, root flesh colour directly correlates with root β-carotene content, where root dry matter content negatively correlated with root β-carotene content (Gurmu et al., 2017). The authors also explained the importance of having knowledge on the number of traits to be evaluated and magnitude of their correlations for indirect selections. More to the point, correlation analysis provides information about the degree of relationship between important plant traits and is also a good index to predict yield response in relation to the change of a particular character. When higher numbers of variables are considered in correlation, the association becomes more complex.

Path coefficient analysis is a reliable statistical technique which provides means not to quantify the interrelationships of different yield components but also indicates whether the influence is directly reflected in the yield or takes some other pathway for ultimate effects (Dewey and Lu, 1959). Therefore, this research was conducted to demonstrate the association among various characters and identify traits that have maximum effect on root yield of orange fleshed sweetpotato genotypes.

Description of the experimental site

The experiment was conducted during the 2017 under rain-fed condition at Hawassa Agricultural Research Center (HwARC). HwARC is located in Hawassa city (7004Î„N,  38031Î„E, 1700 m above sea level with the average annual rain fall of the area 1141 mm, minimum/maximum air temperature is 13.1/27.10C respectively), the capital of Southern Nations, Nationalities, and Peoples’ Regional State (SNNPRS), in the southern part of Ethiopia. The soil is volcanic in origin and is classified as Vitric Andosol which is suitable for sweetpotato production.

Twenty four orange fleshed sweetpotato genotypes were used for the study, among which two released varieties in Ethiopia included as checks (Kulfo and Tula). The four genotypes are advanced lines from HwARC crosses and the rest are introduced varieties from Kenya, Uganda and Mozambique. The description of the genotypes is shown in Table 1. 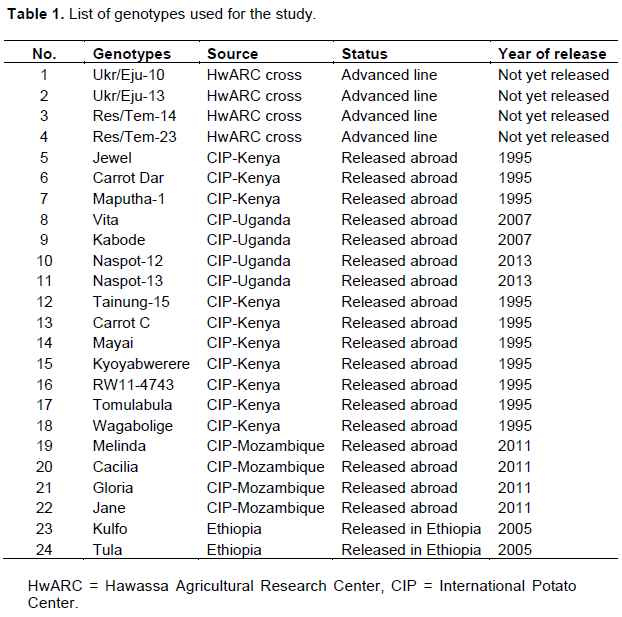 The experiment was arranged in Randomized Complete Block Design (RCBD) having three replications. There were three blocks each consisting 24 plots. A plot size was 7.2 m2 with 3 m long and 2.4 m width. Each plot consisted four rows (ridges), with ten plants per a row. The spacing between rows and between plants within row was 60 and 30 cm, respectively. The spacing between blocks was 2 m. Ten holes per row and 40 per plot were prepared and one vine cutting (plant) of 30 cm length was planted in each hole  of  the row (ridge). The trial was planted on 8 August, 2017. All plots received the recommended cultural practices uniformly and no fertilizer was applied. Replanting was done to substitute the dead vine after one week of planting. Hilling up was done after fourth week of planting and all plots were kept weed free by regular weeding and cultivation. Harvesting was done on 28 December, 2017 after sweetpotato leaves changed to yellowish color. Two central rows were used for data recording by excluding the two plants grown at both ends of the row and the two border rows.

Phenotypic and genotypic correlations were computed following the method described by Singh and Chaudhary (1985) as:

The calculated phenotypic correlation values were tested for its significance using t-test:

The coefficients of correlations at genotypic levels were also tested for their significance by the formula described by Robinson and Comstock (1955) indicated as follows:

Path coefficient analysis provides an effective way of finding out direct and indirect sources of correlations and identifies the most reliable yield contributing traits. It is computed using the method suggested by Dewey and Lu (1959) using Microsoft Excel 2010. Thus, correlation coefficient of different characters with storage root yield was partitioned into direct and indirect effects adopting the following formula: 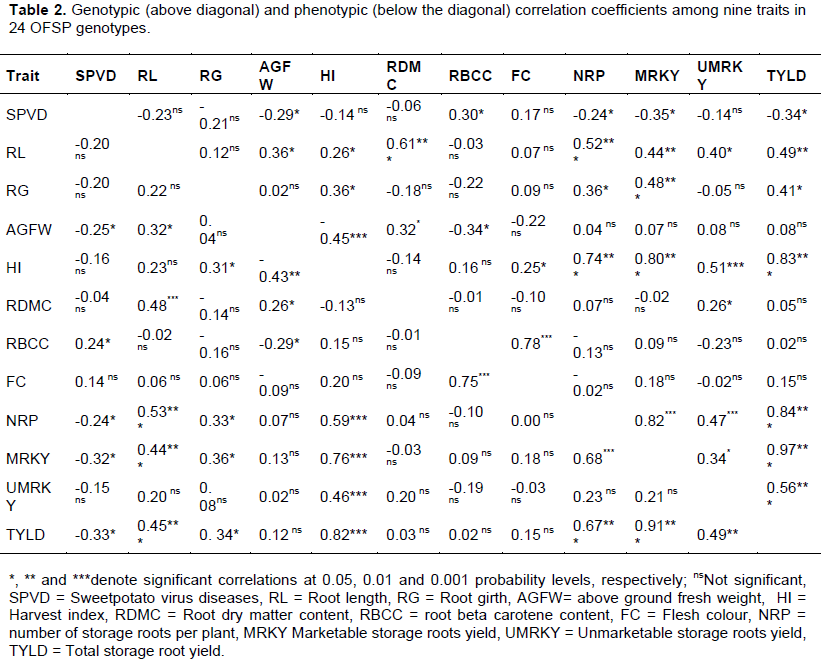 Number of roots per plant had a strong positive association with root length, harvest index and marketable root yield, at genotypic and phenotypic levels. This indicates selection based on these traits would improve the total storage root, since these traits are the most important components of total storage root yield (Tadesse, 2006; Gurmu et al., 2015, 2017).  Total storage root yield had negative correlation with SPVD, indicating the damaging effects of diseases severity on the total storage root yield. Similarly, Mekonnen et al. (2014) reported in their previous work a negative correlation between fresh root yield and SPVD with emphasis to the damaging effects of the disease on sweetpotato in Ethiopia. On the other hand, highly significant negative correlation was observed between harvest index and aboveground fresh weight (-0.43). This may signify that a genotype that possesses vigorous vegetative growth tends to produce less storage roots, which in turn imply the presence of competition between the shoots and roots for photosynthates (Tsegaye et al., 2006), a trait contributed to reasonable distribution structure of photosynthates that led to the high root yield of sweetpotato (Chen, 1965).

Root dry matter content, root beta carotene and root girth also exerted slightly positive direct effect on total storage root yield, with path coefficients of 0.201, 0.106 and 0.001, respectively (Table 4). This is partially in agreement with the report by Gurmu et al. (2017). SPVD, root length and flesh colour showed negative direct effect of -0.026, -0.023 and -0.089, respectively, on total storage root yield. In the current study, at phenotypic level, most of traits showed similar trends of direct and indirect contribution to the total storage root yield as indicated at genotypic level, except the differences in the extent of the contribution (Tables 3 and 4).