Solanum aethiopicum Shum group is a nutrient-rich and income-generating crop enterprise in various sub-Saharan Africa countries. Despite its importance, the development of its improved varieties has not been prioritized. Until now, no field-based descriptor development reference for the crop is available for testing candidate varieties for distinctiveness, uniformity and stability. The purpose of this study is to identify morphological variables that provide identity of S. aethiopicum Shum group accessions across environments. With ten accessions across three test locations, it was observed that the highly polymorphic morphological variables were majorly vegetative and a few reproductive ones. They include plant height at flowering, plant canopy breadth, plant branching, petiole color, petiole length, leaf blade length, leaf blade width, leaf lobbing, leaf tip angle, flowering time, style length, fruit position, fruit flesh density, fruits per inflorescence and fruit flavor. A static stability analysis, a common selection technique for obtaining consistence in performance of genotypes, showed that accessions varied in their interaction with environments for different descriptors. The most statically stable accessions were 184P and 163P while the least stables were 168P, 148, 141, and 137. The findings indicate the potential for identifying unique and stable varieties of S. aethiopicum Shum group for the processing of official release to farmers.

There is an increasing interest among researchers and policy makers in promoting variety development, cultivation, value-addition and consumption of vegetables (Bisamaza and Banadda, 2017; Cernansky, 2015; Ebert, 2014; FAO, 2005; Pincus, 2015; Rubaihayo et al., 2003; Stone et al., 2011). The breeding and exploitation of new varieties is an avenue that can contribute significantly to improving rural income and overall economic development especially in the third world. For instance, development of new varieties with higher yields increases the value and marketability of crops. New varieties should however, meet the distinctiveness, uniformity and stability (DUS) tests as criteria used by national variety release systems (Mendes de Paula et al., 2014; UPOV, 2002).  Distinctness describes the extent to which a descriptor can demonstrate differences between varieties; uniformity, on the other hand, describes the level of homogeneity within a variety. Stability of a genotype refers to its tendency to conserve performance across environments (Becker and Leon, 1988; Kamidi, 2001). Plant morphological characters are universally accepted descriptors for DUS testing and varietal characterization of crop species and are useful for distinguishing different varieties. Determining whether descriptors comply with the above mentioned prerequisites can best be done by evaluation of characteristics in field trials in which various genotypes are grown under identical conditions.

Coefficients of stability are used to identify the genotypes exhibiting same performance for specific variables (Balestre et al., 2009; Eberhart and Russell, 1966; Finlay and Wilkinson, 1963; Temesgen et al., 2015). Stability coefficients are commonly used with yield estimates but the same principle can be extended to morphological descriptors (Mendes de Paula et al., 2014; Sabaghnia et al., 2012; Temesgen et al., 2015). Performance stability refers to a genotype’s ability to perform consistently, whether at high or low levels, across a wide range of environments. Most stability measures relate to either of  two  contrasting  concepts of stability: “static” and “dynamic” (Eberhart and Russell, 1966; Finlay and Wilkinson, 1963; Lin and Binns, 1988). Static stability is analogous to the biological concept of homeostasis: a stable genotype tends to maintain a constant performance for a particular variable across environments (Lin and Binns, 1988; Palanog et al., 2015). This study aims at identifying: variables that provide identity of Shum accessions across environments, and accessions that are stable in morphological traits. The study generated results on reliable descriptors for field characterization of S. aethiopicum Shum group genotypes. The study accessions had earlier been characterized under screen house conditions (Sseremba et al., 2017)but needed field verification.

Three evaluation sites in Uganda were used; Ntawo village in Mukono Municipality in the Central region. Ntawo is an on-station field testing site for the Department of Agricultural and Biological Sciences, Uganda Christian University, Mukono. Butiki village in Jinja Municipality was used (near East), and Busamaga village in Mbale Municipality (Far East) in Eastern Uganda. Mukono, Jinja and Mbale are located at about 24, 70 and 230 km, respectively, East of Kampala.

The study accessions were obtained from farming households in Uganda through a field survey in 2014/2015, followed by on-station seed increase and purification by self-pollination. The accessions were assigned codes; some with stem color suffices such as G and P for green and purple, respectively, whenever more than one accession from same survey location possessed similar other attributes other than stem color.  Ten accessions were used in this study: 108, 137, 141, 145, 148, 163P, 168P, 183P, 184G and 184P, and they have been described earlier under screen house conditions (Sseremba et al., 2017).

A randomized complete block design (RCBD) with three replications was used at each of the three test sites; Jinja, Mbale and Mukono. The evaluation was carried out during the first rainy season (February to June 2016). Four-row plots of length 4 m were used at an inter-row spacing of 30 cm. Direct sowing into the experimental field was used. The within-row sowing was done by drilling followed by thinning to 10 cm at 4-leaf stage (1 month after sowing). The testing fields were prepared by hand hoeing and use of Glyphosate to reduce on the weeds burden before the germination of planted seed. At planting, D.A.P fertilizer at a rate of 50 kg/acre was applied. Topdressing with N.P.K (25:5:5) was carried after thinning and at 2 months after sowing. Hand weeding within established fields was used.

Data were collected during the opening of first flower until physiological ripening of fruit stages, depending on the variable. Forty one morphological variables were measured according to Adeniji et al. (2013)and Sseremba et al. (2017), with some modifications. A brief description of the various variables measured is included in Table 1. 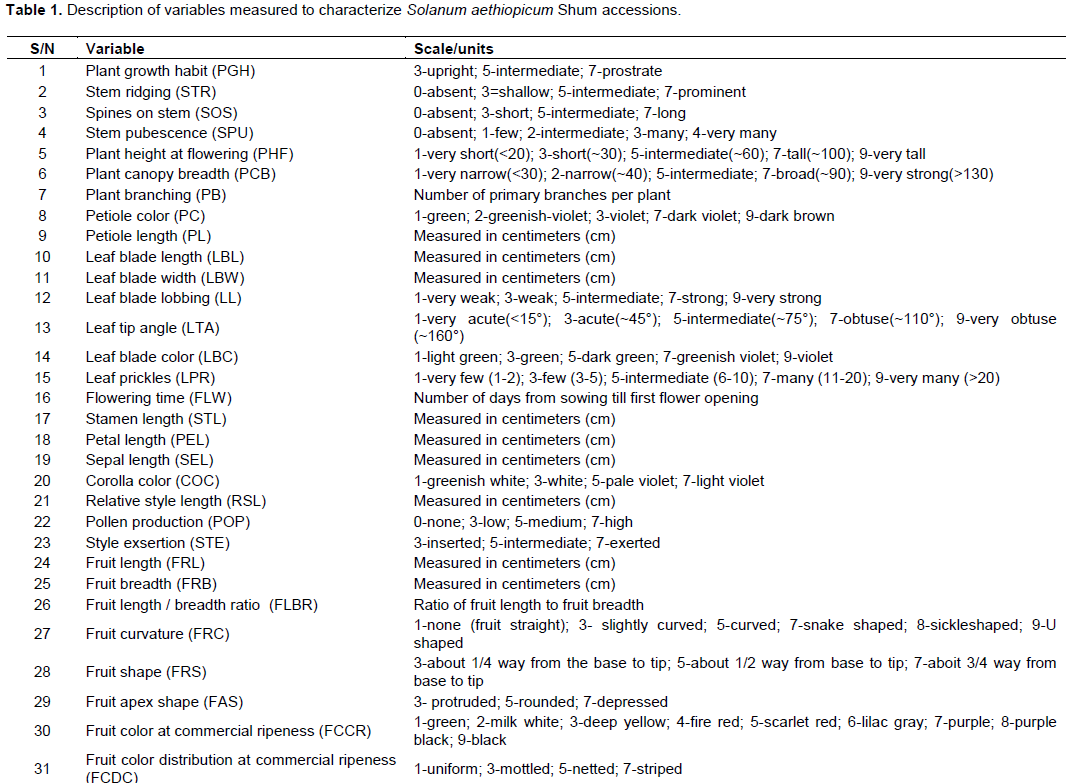 A restricted (residual/reduced) maximum likelihood analysis considering accession and location as factors was implemented in BreedingView statistical software (VSN International Ltd, Hemel Office). A boxplot of each of the 41 variables measured was generated from mean values of each accession per location. Presence of spread (or absence of it) in the boxplot was used as criteria for distinguishing variables as either monomorphic or polymorphic. A variable was identified as monomorphic when all accessions had the same mean performance across test locations (Jinja, Mbale and Mukono). It was considered as slightly polymorphic when at least one of the test sites produced similar traits of a character (variable) for all accessions. Highly polymorphic variables (or descriptors) are ones clearly spread (large variation) among accessions at each of the three test locations. A static stability analysis (Finlay and Wilkinson, 1963; Lin and Binns, 1988; Palanog et al., 2015)was then carried out in Breeding View on variables which were qualified as highly polymorphic. Coefficients of static stability were used to select the most and least stable accessions per descriptor. 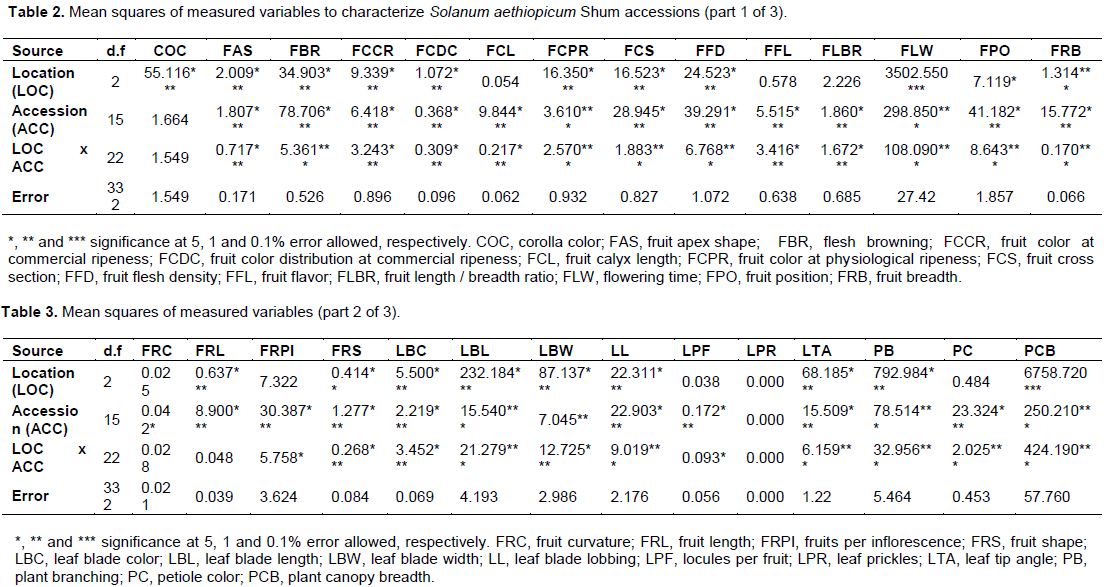 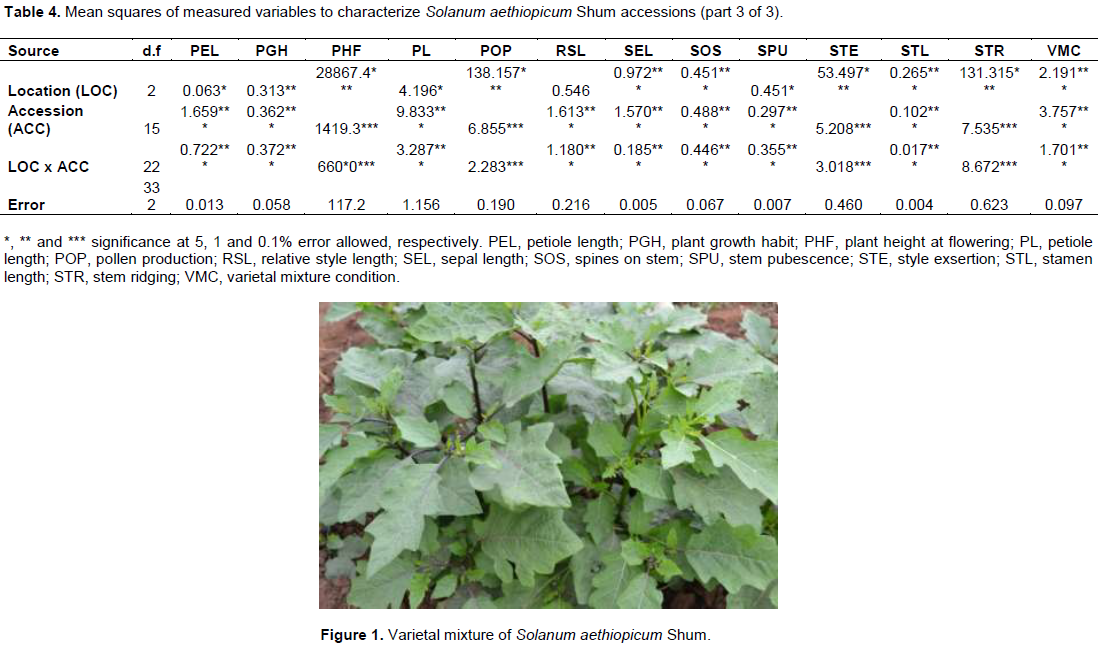 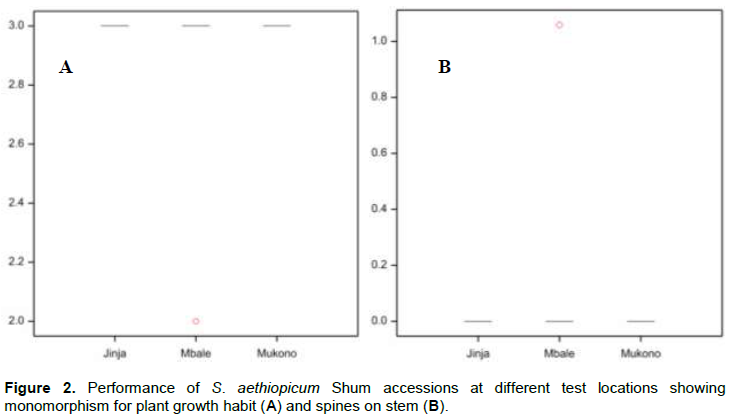 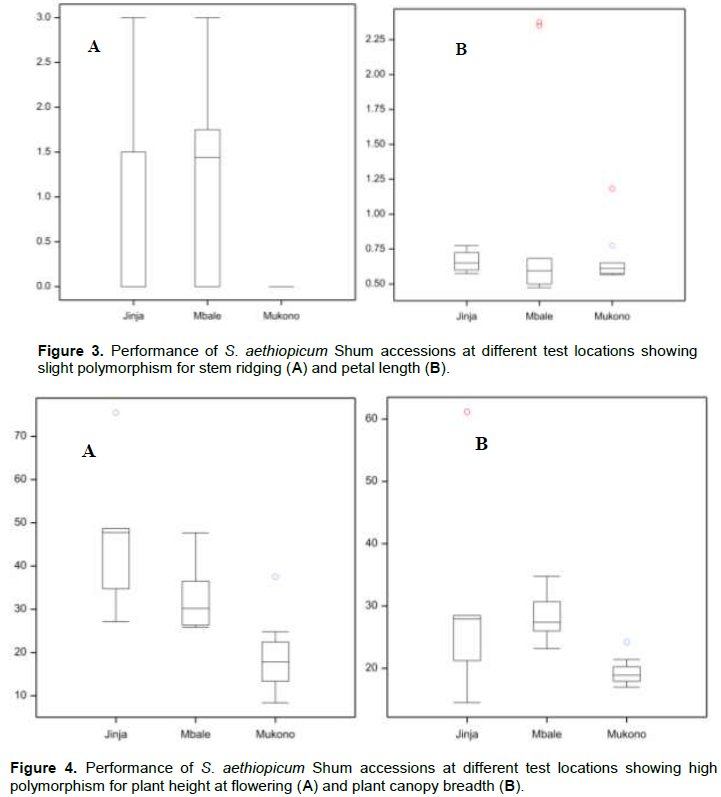 It was observed that some of the variables had same form (or monomorphic) among accessions across test environments. The monomorphic variables are not useful markers for discriminating among genotypes (Odong et al., 2011; Prohens  et  al.,  2013; Sseremba  et  al., 2017; Sseremba et al., 2018a). The variables namely plant growth habit, spines on stem, stem pubescence, leaf blade color, leaf prickles, fruit curvature, fruit shape, fruit color distribution at commercial ripeness, and varietal mixture condition, cannot be used as descriptors for purposes of identifying distinctiveness among the study accessions. If such monomorphic markers were the only available morphological descriptors, it would necessitate application of deoxyribonucleic acid (DNA) markers which are known for  high discriminative power (Gramazio et al., 2016). The DNA markers are however, very expensive particularly for crops such as the S. aethiopicum whose information on genomic resources is still scanty. Nonetheless, other morphological variables showed discriminative ability (of varying degrees) among the study accessions. Of the seventeen slightly polymorphic variables, only one (that is, stem ridging) was vegetative. The  majority  of  slightly  polymorphic  variables  were reproductive (flower or fruit related), suggesting a low discriminating power for reproductive structures. Similarly, nine (60%) out of fifteen highly polymorphic variables were vegetative, indicating a high discerning power for vegetative structures of S. aethiopicum Shum group (Adeniji et al., 2012).

The highly polymorphic vegetative variables were plant height   at    flowering,    plant    canopy    breadth,    plant branching, petiole color, petiole length, leaf blade length, leaf blade width, leaf lobbing and leaf tip angle while reproductive ones were flowering time, style length, fruit position, fruit flesh density, fruits per inflorescence and fruit flavor. This observation generally agrees with a previous study in the screen house (Sseremba et al., 2017)but slightly deviates from the work of Adeniji et al. (2012)and Prohens et al. (2013). This study and that of Adeniji et al. (2012)were both field-based except the focus was on the leafy (Shum) and all the four recognized morphological groups of S. aethiopicum, respectively. Sseremba et al. (2017)compared the morphological attributes of S. aethiopicum and its progenitor, S. anguivi under screen house conditions; and it was observed that both vegetative and reproductive variates are useful in distinguishing between accessions of the two  species.   It   is  notable  that  S.  aethiopicum Shum is leafy-type while its progenitor is fruit-type (SÄ™kara et al., 2007; Sseremba et al., 2017). This study’s observation that almost all the slightly polymorphic variables were reproductive characters suggests that leafy-type species should be described using vegetative structures (for morphological characterization).

From the static stability results, generally, different accessions showed higher stability for some than the rest of the variables. Accessions with the highest number of variables for best static stability were 184P followed by 163P. Conversely, accessions 168P, 148, 141, and 137 had the highest number of variables for least static stability. The observations suggest that either the parameters measured were at different fixation levels (level of homozygosity of same loci) in different accessions or there is a mere difference in  form   that   a   variable  exhibits  in  relation  to genotype and environment. The possibility of different fixation levels at same loci across accessions can be eliminated on grounds that S. aethiopicum is a predominantly self-pollinating species (Sakhanokho et al., 2014; SÄ™kara et al., 2007); and pure line accessions were used in this study. Therefore, the effect of cross-pollination on genetic variability is ruled out. It is believed that some accessions were environmentally more robust than others on the account of their innate differences in genotype by environment interaction attributes (Donoso-Ñanculao et al., 2016; Kamidi, 2001; Sabaghnia et al., 2012; Temesgen et al., 2015). Thus, accessions 184P and 163P can be considered as the most stable across test environments while 168P, 148, 141, and 137 were the most sensitive. Sseremba et al. (2018b) had earlier obtained similar results when the environments were based on drought stress levels in a screen house study.

The study aims at firstly, identifying variables that provide identity of Shum accessions across environments, and secondly, identifying accessions that are stable in morphological traits. From the first objective, it was observed that plant height at flowering, plant canopy breadth, plant branching, petiole color, petiole length, leaf blade length, leaf blade width, leaf lobbing, leaf tip angle, flowering time, style length, fruit position, fruit flesh density, fruits per inflorescence and fruit flavor are effective in distinguishing among Shum group accessions of S. aethiopicum. In the second objective, it was observed that accessions 184P and 163P were the most statically stable across test environments while 168P, 148, 141, and 137 were the least robust in conserving their morphological traits. A further study on static stability of Shum group genotypes that considers a more diverse source of accessions and additional testing environments is recommended so as to broaden the scope of inference for polymorphic descriptors of the subspecies. A combined use of molecular and morphological markers on same accessions is also recommended for further study; as it could play a cross-check role in attributing the observed morphological differences.