Genetic dissimilarity and growth of coffee in Cerrado

Coffee production has contributed significantly to economic and social development in Brazil and is of great importance to Brazilian agribusiness. Brazil has been the world's largest producer and exporter of coffee for over 150 years (Paiva et al., 2010). National productivity in 2018 was 1903.2 kg per hectare. In 2019, 1509.6 kg per hectare was estimated (CONAB, 2019).

The Brazilian coffee industry has undergone significant changes as crop has moved into the Cerrado areas, particularly in its production system (Oliveira et al., 2010). The Cerrado produces excellent quality coffee due  to  its two well-defined seasons: rainy summer and dry winter (Fernandes et al., 2012). In addition, controlled water stress can be used to standardize the flowering and ripening of fruits in the Cerrado (Guerra et al., 2005).

Brazil has 131 registered cultivars of Coffea arabica L. However, not all are able to adapt to different growing conditions and reach their productive potential. Botelho et al. (2010) point out that genotype with superior behavior in a certain environment may not behave satisfactorily under other conditions. Thus, it is necessary to improve and select genotypes to ensure that they express desired traits. The development of new cultivars is achieved through genetic improvement processes (Paiva et al., 2010), which require genetic variability in the population (Ivoglo et al., 2008). Evaluating progenies in several locations is an important step in the final phase of a plant breeding program. With this information, the interaction between genotype and environment can be determined. Additionally, when interactions exist, subsidies can be provided to encourage cultivation at specific sites (Pinto et al., 2012). By characterizing genetic divergence, efficiency in the selection of parents in breeding programs can be increased (Silva et al., 2013). In this process, hundreds to thousands of individuals are evaluated to identify superior and divergent genotypes for certain characteristics in order to design by recombination (Silva et al., 2016). The dissimilarity analysis is used to quantify genetic variability and the relative contribution of the variables to the genetic dissimilarity, allowing for the identification of promising combinations (Torres et al., 2015).

The genetic dissimilarity allows one to identify promising genotypes for breeding programs and to recommend for cultivation. Giles et al. (2019) verified genetic divergence among 34 genotypes of Coffea sp. and conclude that phenotypic variations occurred predominantly due to genetic causes. Thus, the objective was to study the genetic dissimilarity among 35 genotypes of C. arabica in the Cerrado, under drip irrigation, using phenological data and multivariate statistics.

The experiment was conducted at the Ceres Campus of the Federal Institute Goiano, GO. The Ceres Campus is located in the center of Goiás in the São Patrício Valley (UTM: E = 649,582.00 m and N= 8,302,194.00 m), and is characterized by having flat relief, very deep eutroferric red nitosol, clay texture, and an altitude of 556 m. The climate, according to the classification of Köppen, is Aw type (tropical climate with wet and dry seasons- Tropical Seasonal, dry winter), with an average annual temperature of 25.4ºC (average minimum: 19.3°C; average maximum: 31.5°C). The annual precipitation is approximately 1700 mm.

The experiment was conducted on April 8, 2015 in a randomized complete block design. The experiment consisted of 35 treatments, 31 cultivars and 4 progenies (Table 1) with four replication and 10 plants that were placed 3.50 × 0.75 m apart. The eight central plants were considered for analysis. During the experiment, recommended management practices as fertilization, phytosanitary management and irrigation for the crop were followed. In the dry season, drip irrigation occurred on Mondays, Wednesdays, and Fridays to account for the need for the crop (Kc) and evapotranspiration in a class A tank. Fertilization was performed based on soil analysis results and recommendations of the 5th approximation of the Soil Fertility Commission of the State of Minas Gerais (Guimarães et al., 1999). At 6, 12, 18 and 24 months after planting, stem diameter (DST), canopy diameter (DCA), plant height (HEI), number of orthotropic branch nodes (NOBN), average length (cm) of orthotropic branch internodes (ALOBI), total number of nodes at the 2nd plagiotropic branch pair (TNPB), total length (cm) at the 2nd plagiotropic branch pair (TLPB), and average length (cm) of plagiotropic branch internodes (ALPBI) were measured. 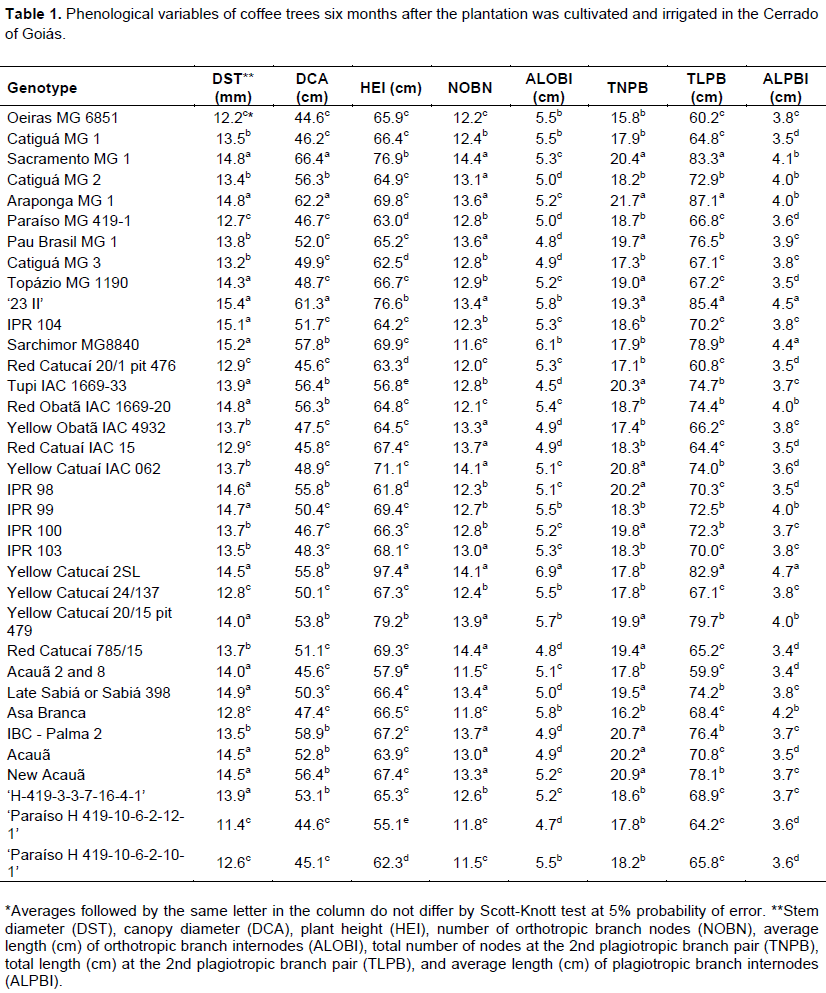 Data were analyzed using Analysis of Variance, F, and the Scott-Knott test at 0.05 of means for phenological parameters. Hierarchical Agglomerative Cluster (HAC) was used to examine dissimilarity by measuring average Euclidian distance. Additionally, Ward’s agglomeration method was used to obtain dendrograms and the Pearson’s method (n) for Principal Component Analysis (PCA) was used to obtain the correlation matrix and distance Biplot. Statistical analyses of genetic data were performed using the software XLSTAT 2014.5.03. The number of groups in the dendrogram was determined by the automatic truncation function, which attempts to create homogeneous groups (XLSTAT-MX, 2005). 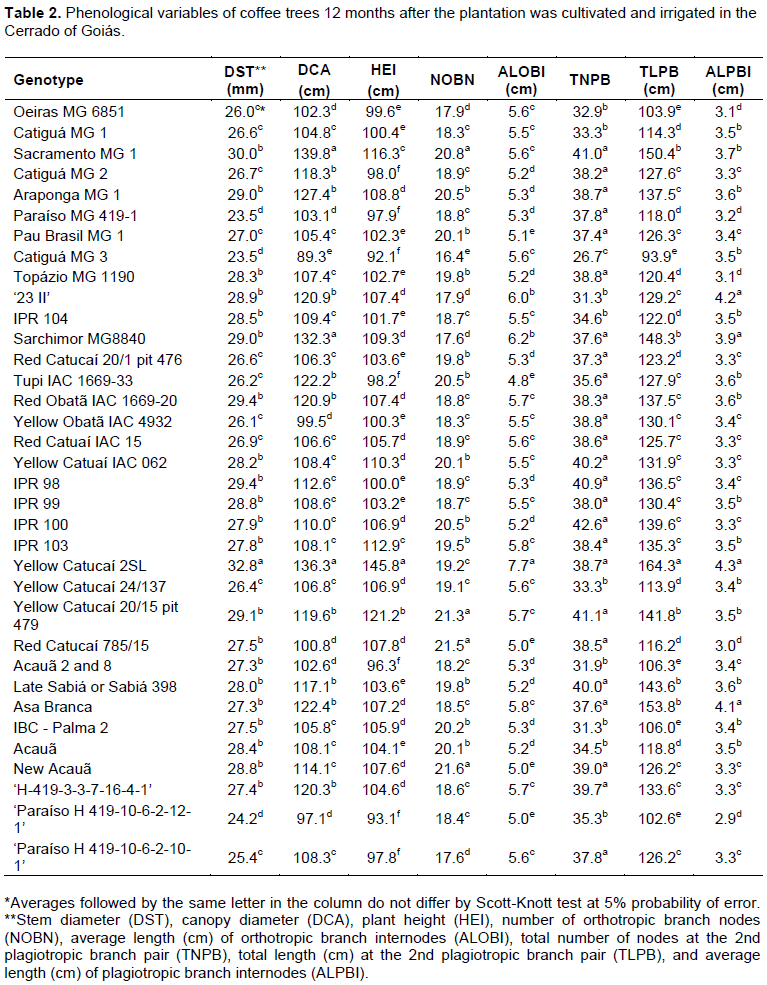 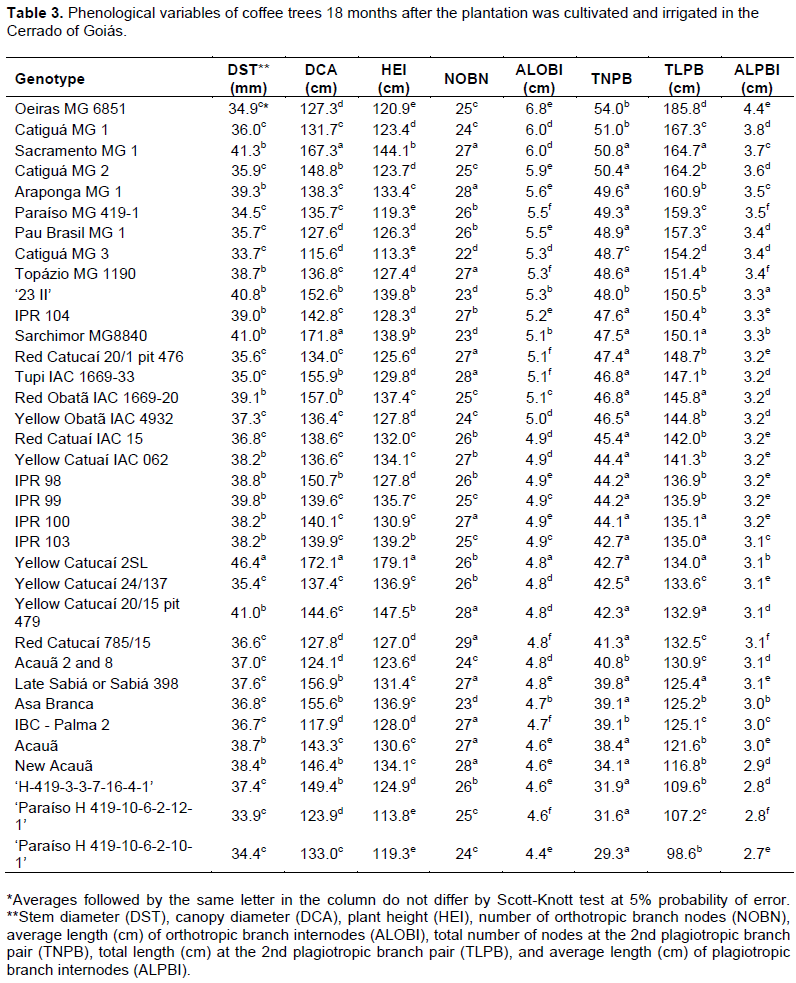 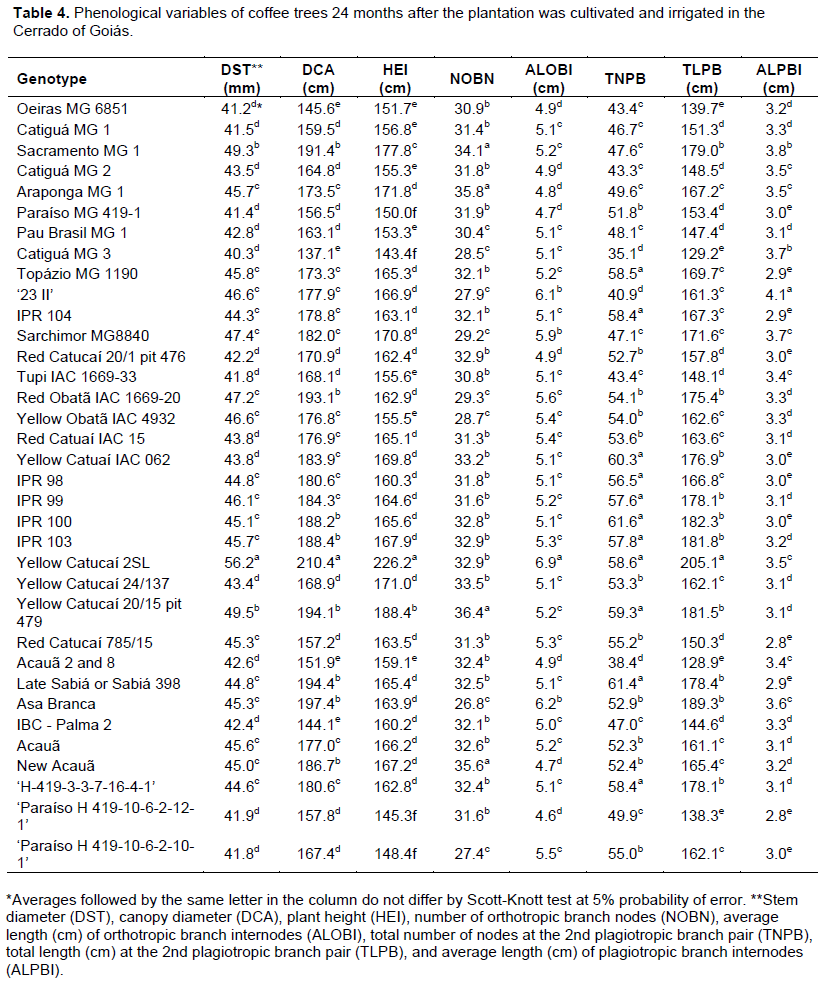 Meireles et al. (2009) state that various phenological phases of C. arabica are affected by environmental conditions, especially by photoperiodic variation and meteorological conditions (rainfall distribution and air temperature). In this experiment, the evaluations at 6 and 18 months after planting, in month October, of season rainy beginning and the photoperiod increasing, peaking in December. At 12 and 24 months after planting, month of April, the end of the rainy season and the photoperiod with short days, with minimum in June. Genetic diversity was observed between genotypes in the adaptability and interaction of the genotypes with the environment, so multivariate techniques were used to evaluate genetic divergence. 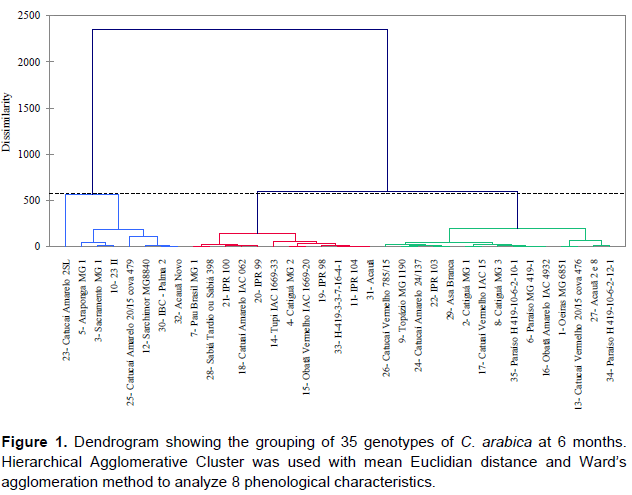 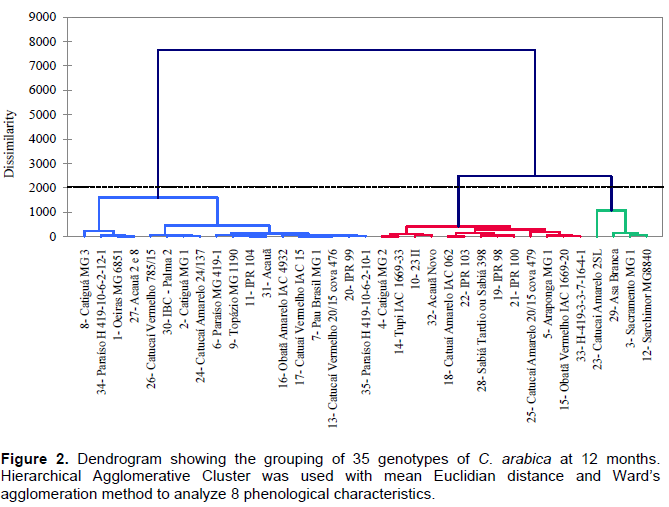 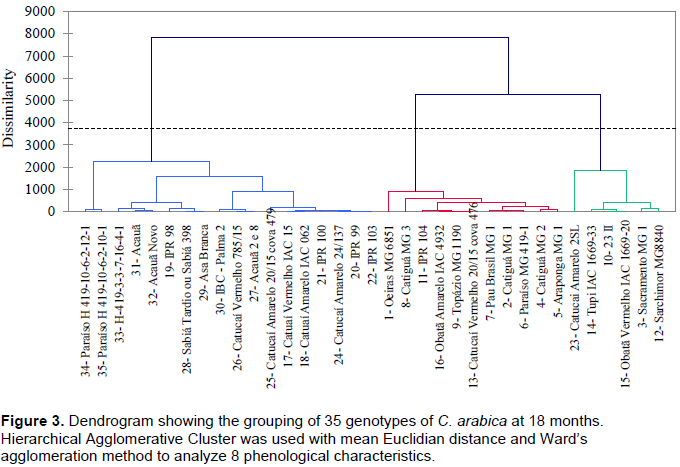 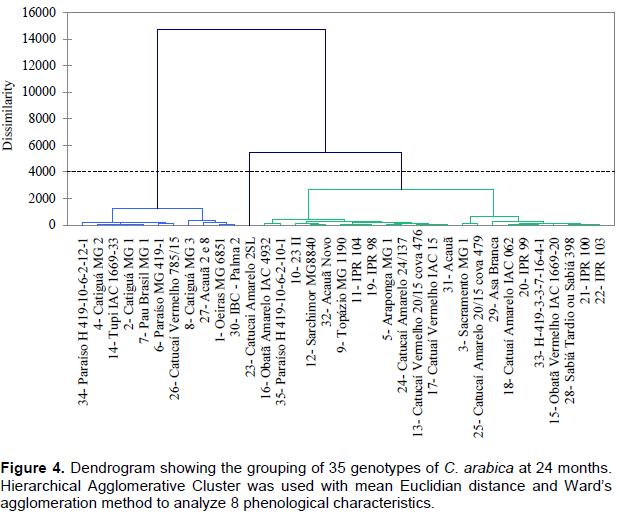 Fernandes et al. (2012) reported that coffee tree growth was highest in the hottest and rainy months, which would be October to April in this experiment, period in which we obtained better results of growth of the studied genotypes. In addition, longer days occur during this time, providing greater energy availability in the form of solar radiation and temperature (Camargo and Camargo, 2001). The number of groups formed by Ward's agglomerative method shows that there is wide variability among  the evaluated  genotypes. Guedes  et  al.  (2013) verified genetic divergence among coffee trees of the Maragogipe germplasm in the Alto Paranaíba region of the State of Minas Gerais, using the Tocher method. This shows that the genetic divergence among coffee plants is mainly due to genetics, as recommended by Giles et al. (2019).

This result may be attributed to the fact that this genotype had the highest averages for phenology traits (DST = 56.2 mm, DCA = 210.4 cm, HEI = 226.2 cm, ALOBI = 6.9 cm, TNPB = 58, 6, and TLPB = 205.1 cm) compared to the other genotypes. High phenology averages for Yellow Catucaí 2SL may be due to that fact that this cultivar is a hybrid (Icatu × Catuaí) and is highly adaptable, which is a known characteristic of 'Catuaí' (Botelho et al., 2010). However,   densification   between   plants    could  have caused superior development of this cultivar. Pereira et al. (2011) found that the spacing between lines and between plants influenced the growth and architecture of Coffea arabica trees. However, this genotype-environment interaction is unique to this cultivar, since the other cultivars did not show the same pattern of development. 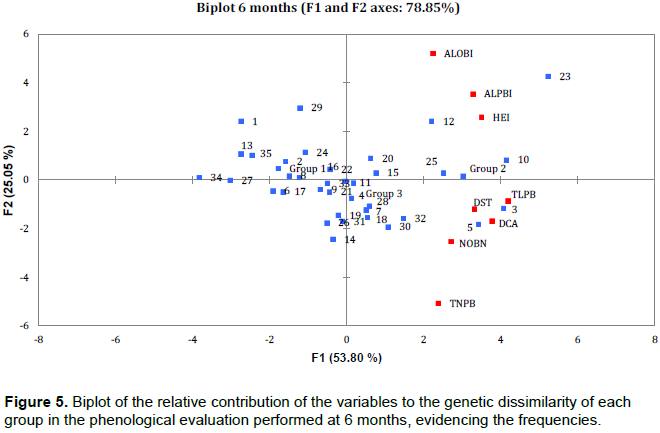 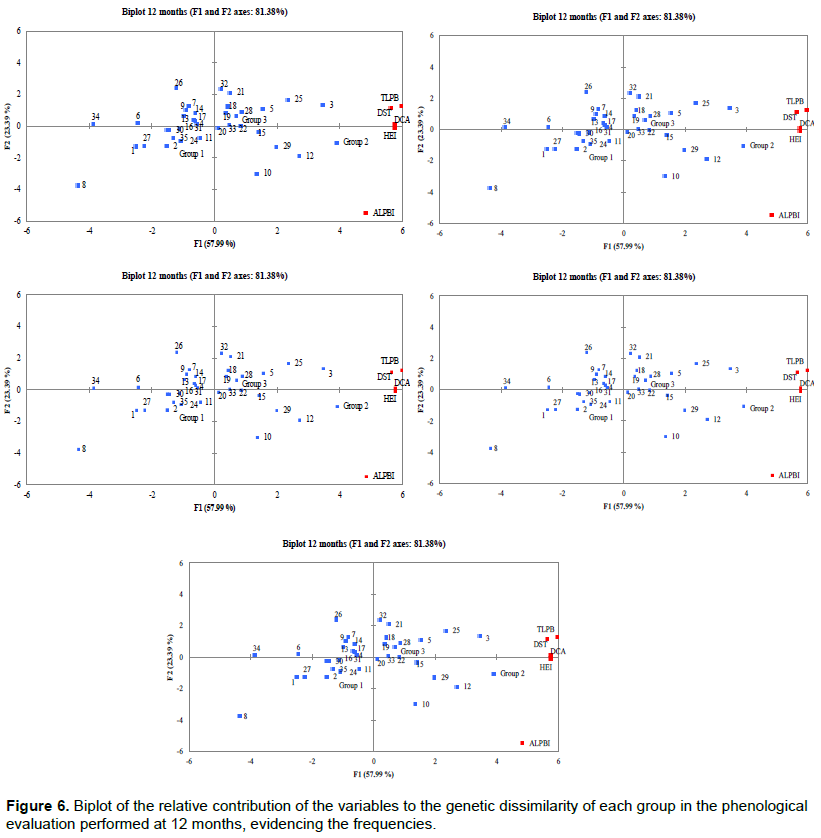 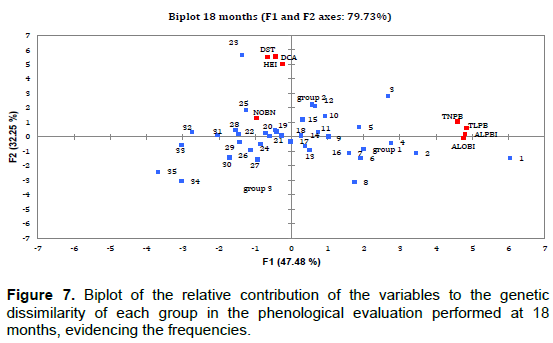 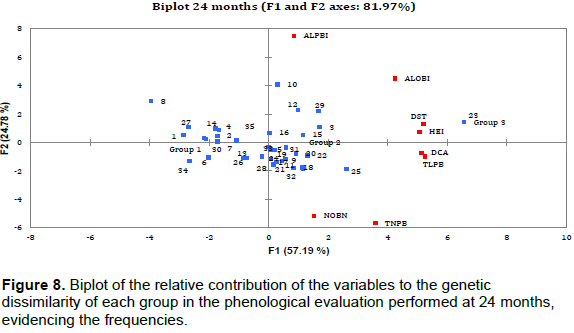 The PCA shows that there was a large contribution of the phenological variables to genetic dissimilarity (>75%) in the four evaluation periods. Rodrigues et al. (2013) verified that evaluation methods of productivity, stability, and adaptability, the harmonic mean of the genetic values, the relative performance of the genetic values, and the harmonic mean of the relative performance of the predicted must be part of the selection criteria for recommendation of genotypes of coffee for commercial plantations.

However, phenological patterns can vary within the same plant species if evaluated in different ecosystems, and variation can occur between populations, individuals, and years (Mantovani et al., 2003). Moreover, several factors can influence these phenological variations, such as exposure to light, leaf damage, water stress, or flower abortion. Thus, the influence of these factors on coffee phenology should be considered when examining a particular genotype in different regions and conditions. By analyzing the contribution rate of phenological variables over four evaluation periods (Figure 9), a contribution percentage equal to or greater than 25%was observed for: ALOBI, TNPB, and ALPBI at 6 months; NOBN, ALOBI, TNPB, and ALPBI at 12 months; DST, DCA, HEI, TLPB, and ALPBI at 18 months; and ALOBI, TNPB, and ALPBI at 24 months. ALPBI contributed throughout the four evaluation periods. Moreover, the greatest number of variables contributing ≥25% was observed for the 18 month evaluation, showing that this may be the best stage of development to evaluate genotypes and examine genetic divergence under edaphoclimatic conditions. 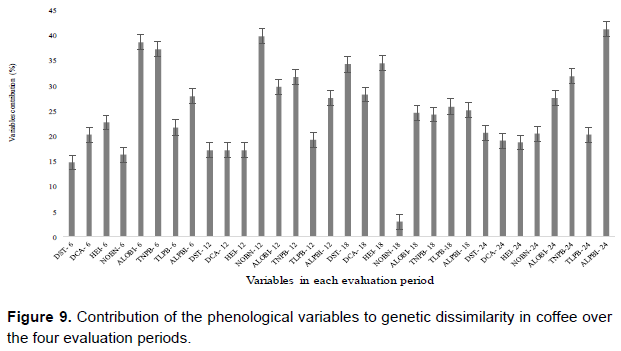