Wheat (Triticum aestivum L.) is one of the most important food crops worldwide. Powdery mildew (Pm), caused by Blumeria graminis f. sp. tritici is a severe disease in wheat production. Gene Pm5e, from a Chinese wheat cultivar Fuzhuang 30 has proven to be a valuable resistance source for Pm in breeding. To further map this gene and develop Kompetitive allele-specific PCR (KASP) assays for marker-assisted selection (MAS), a F2 population containing 395 individuals was first phenotyped for Pm resistance, a bulked segregant analysis (BSA) was used to identify polymorphic SNPs using the 35K wheat SNPs chip. 27 polymorphic SNPs between bulks in the Pm5e region were identified and were converted into KASP assays to map Pm5e. A genetic linkage map of Pm5e was constructed with 2 SNP and 2 SSR molecular markers. Pm5e was mapped to a 9.5 cM interval and the two SNP markers AX-95000860 and AX-94638908 were the two closet flanking markers, which delimited Pm5e into a 14 Mb region. Identification of the molecular markers and development of the two KASP assays laid a solid base for MAS of gene Pm5e in breeding.

Wheat is an adaptable and widely distributed world food crop, which provide about 21% of food calories and 20% of protein for the human (He et al., 2018). Powdery mildew (Pm) is a disease caused by the biotrophic fungus Blumeria graminis f. sp. tritici (Bgt), which often occurs in wheat production areas with cool and humid climates (Cowger et al., 2012). In China, this foliar disease is endangering most regions of winter wheat and spring wheat productions (Liu et al., 2016).

Use  of   Pm   resistance   genes   to  develop  resistant cultivars is the most effective way to control the epidemics of Pm and reduce the economic losses (Hulbert et al., 2001) however, the development of Pm-resistant wheat cultivars requires resistance genes. To date, seventy-eight designated and many other temporarily designated Pm resistance genes or alleles have been identified in wheat. Some of these genes have single alleles, while some of them have multiple alleles (e.g., Pm1, Pm2, Pm3, Pm4, Pm5, and Pm54 loci) (Wu et al., 2018; Zhang et al., 2016).

In a former study, using a F2 population derived by crossing Fuzhuang 30 with Chancellor, we mapped Pm5e to 7BL, and identified two flanking SSR markers, Xwmc364 and Xbarc065 (Zhu et al. 2008). The objective of this study is to: (1) identify SNP markers closely linked with Pm5e, and (2) develop KASP assays that can be widely used in MAS of Pm5e to improve Pm resistance in wheat.

A population of 395 F2 was derived from a cross between the Pm- resistant   parent   Fuzhuang   30   and   a   Pm-susceptible   parent Chancellor. Seeds from 212 randomly selected F2 individuals were harvested to produce 212 F3 families. Two susceptible cultivars Huixianhong and Mingxian 169 were used as the susceptible controls.

E09, a dominant local isolate of Blumeria graminis f. sp. tritici in China was used to identify the resistance at the seedling stage under artificial climate chamber conditions at 22°C day/18°C night with 60% relative humidity and a 12-h light/12-h dark photoperiod. Fuzhuang 30, Chancellor, Huixianhong, Mingxian 169, 395 F2 plants, and at least 15 plants from each F3 family were tested for Pm resistance. Inoculation and resistance identification followed the methods described by Liu et al. (1999). Seedlings at one leaf stage were inoculated with E09 by dusting conidiospores that were multiplied on the susceptible plants of Huixianhong. Infection types (ITs) of all plants were scored on a 0–4 scale 15 days after inoculation. The inoculated plants with ITs 0-2 were divided into a resistant group with those of 0-4 to a susceptible group (Liu et al., 1999). The genotype of each F2 individual for Pm5e was determined by the phenotype of the corresponding F3 family.

Leaf tissue was harvested at the three-leaf stage of each F2, dried in a SCIENTZ-18 freezer dryer (Ningbo Scientz, China) for 3 days, and ground to powder in a G200 mixer mill (Coyote Bio, China) for 3 min with the aid of a metal bead in each tube. DNA was isolated using a modified CTAB method (Liu et al., 2014; Saghai-Maroof et al., 1984). Bulked segregant analysis (BSA) was used to screen potential polymorphic single nucleotide polymorphism (SNP) markers associated with Pm resistance. Each of the two bulks consisted of 25 highly Pm-resistant and 25 highly Pm-sensitive F2 individuals, respectively, from the F2 population of Fuzhuang 30/Chancellor and screened by the 35K Axiom® Wheat Breeder Genotyping Array (Allen et al., 2017).

Two SSR markers Xwmc364 and Xbarc065, which have been identified to be linked with Pm5e were also screened in this population following the method described by Zhu et al. (2008). Polymorphic SNPs identified by 35K Axiom® Wheat Breeder Genotyping Array between the two bulks were converted into KASP assays and run across the F2 population for linkage mapping.

Sequences  containing  SNPs  linked  with  Pm5e   were   used   as queries to search in the Chinese Spring genome sequence database released by the International Wheat Genome Sequencing Consortium (IWGSC) RefSeq1.0 (Rudi et al., 2018, https://urgi.versailles.inra.fr/) using BLAST to identify the physical positions of the SNPs on 7B. A significant match was declared when at least 98% nucleotide identity was identified with an e-value lower than e−20 (Liu et al., 2014). 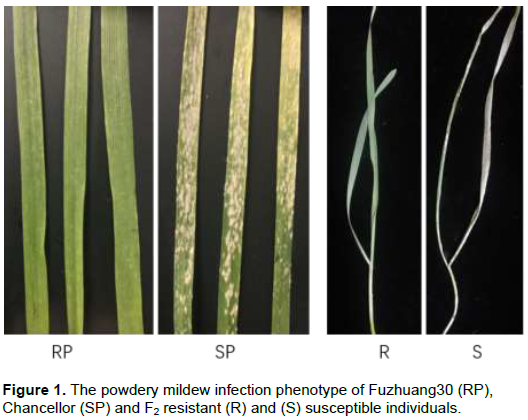 After screening of the two bulks using the 35K Axiom® Wheat Breeder Genotyping Array, 1548 probes were identified as polymorphic between the two bulks. Blasting of these probes in the IWGSC wheat genome sequence database  RefVer1.0   showed   that   these   polymorphic probes were located on all wheat chromosomes (74 in average); however, the probes located on 7B (191) was significantly more than other chromosomes (Figure 2), indicating Pm5e was probably located on 7B. 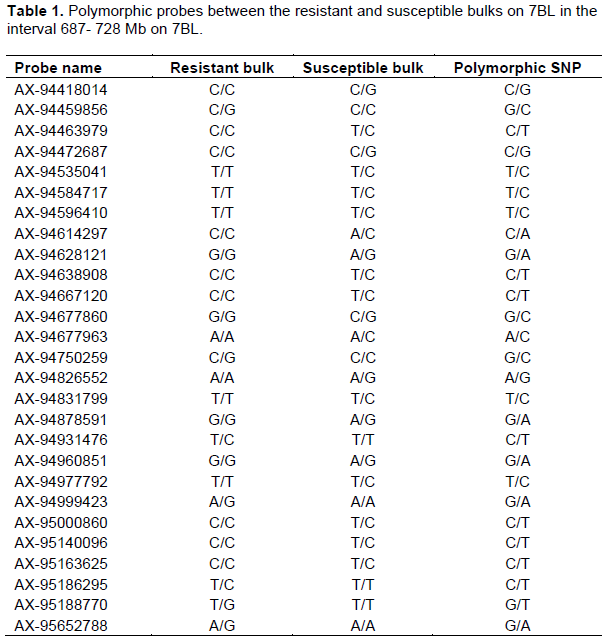 The 27 polymorphic SNPs were converted into KASP assays and run in two parents and randomly selected 40 F2 individuals, only 2 assays AX-95000860 and AX-94638908 detected polymorphism between the parents and can separate the F2 plants clearly. The primers for AX-95000860 KASP assay includes CAGGATTGGACTCGGCTGGAAAC as the AX-95000860-FAM forward primer, CAGGATTGGACTCGGCTGGAAAT as the AX-95000860-HEX forward primer, and ATGTCAGGTCACCACGATGC as the common reverse primer. The primers for AX-94638908 KASP assay include ATGATAACATGCTGCGCATGAC as the AX-94638908-FAM forward primer, ATGATAACATGCTGCGCATGAT as the AX-94638908-HEX forward primer, and TACACAAACTAGGTGGAGGTACAAC as the common reverse  primer.  The  two assays were further run across the F2 population and can clearly separate the population into three groups with homozygous resistant, heterozygous and homozygous susceptible (Figure 3). The two SSR markers, Xwmc364 and Xbarc065, which have been identified to be linked with Pm5e were also run across the F2 population and can separate the genotypes of the F2 individuals clearly (Figure 4). 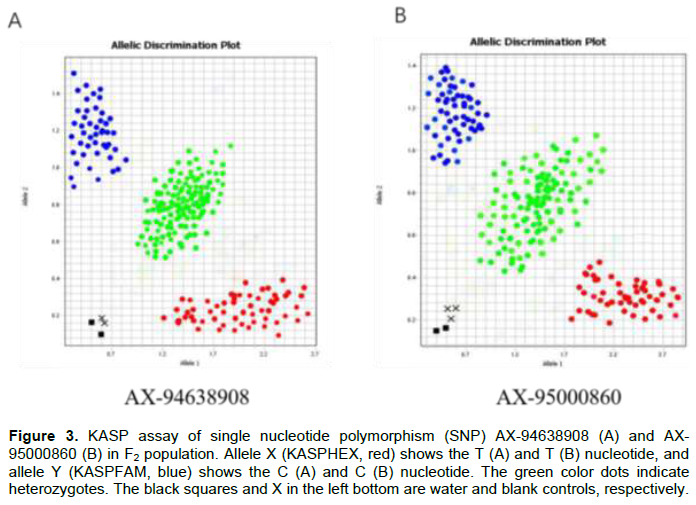 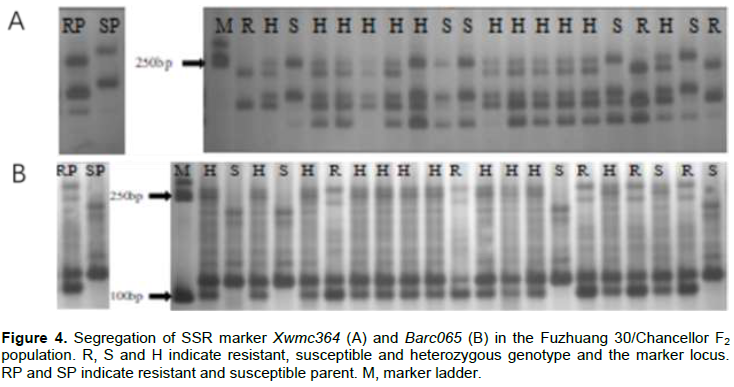 Since gene Pm5e gene was successfully excavated, the predecessors    have     successfully     developed   some molecular markers linked to it, including SSR markers and EST markers (Huang et al., 2003; Zhu et al., 2008; Xie, 2016). However, the mapped markers are far apart from Pm5e. Closely linked flanking markers are urgently needed for effective marker-assisted transfer of Pm5e to new wheat cultivars by MAS.

SNPs are the most abundant DNA sequence polymorphisms in a genome. In the last decade, next-generation sequencing (NGS) technologies have advanced rapidly and have become the cheapest and fastest technology for identification of genome-wide SNPs (Manish et al., 2017). SNP arrays have been developed and used for a variety of genetic and breeding applications including genome-wide association analysis and genomic selection in many crops (Manish et al., 2017; Allen et al., 2017).

In this study, BSA and wheat SNP chip was used to identify SNP markers closely linked with Pm5e, segregation of Pm resistance of resistant and susceptible individuals in the F2 population showed a 1:3 ratio, indicating that Fuzhuang 30 carries a single recessive gene for Pm resistance to Bgt isolate E09, which is consistent with the former study (Huang et al., 2003). Based on the Pm resistance identification, a resistant and susceptible bulk was made and a 35K wheat SNP chip was used to screen the resistant and susceptible bulks to identify  polymorphic  SNPs  between  the  two bulks, and 1548 polymorphic SNPs were identified. Because Pm5e has been mapped on 7BL and two flanking wheat ESTs, CJ729392 and CJ584170, have been identified, we can easily delimit the physical interval of Pm5e according to the wheat reference genome sequence. Only 27 polymorphic SNP between the two flanking ESTs were used  to  develop   KASP   assays   to   fine   map  Pm5e.  Two KASP markers, AX-95000860 and AX-94638908, were identified closely linked to Pm5e with genetic distance of 4.2 cM and 5.3 cM apart from Pm5e, which were much closer than the formally mapped markers, and the interval of the Pm5e region was decreased from 41 Mb to 14 Mb (Zhu et al., 2008; Xie, 2016), which indicated that using SNP chip to identify SNP markers for a specific gene was very effective.

Wheat SNP chip may not be cost effective for breeding selection due to high cost per sample if only a few SNPs are interested. KASP assay, however, is a time saving and cost-effective genotyping method for single SNP screening and has been successfully used in wheat genetic and breeding studies (Semagn et al., 2014; Rasheed et al., 2017). In this study, the identified polymorphic SNPs between the two bulks were converted into KASP assays to map Pm5e and two KASP assays closely linked with Pm5e were mapped, which can be used in MAS of Pm5e.

i) Twenty-seven polymorphic SNPs between the resistant and susceptible bulks in Pm5e genomic region were identified using the 35K wheat SNPs chips.

ii) KASP assays of the polymorphic SNPs were developed and a genetic linkage map of Pm5e was constructed together with 2 SNP and 2 SSR markers.

This project is funded by the National Key Research and Development Programs of China (2016YFD0101802), and the Shandong Province Agricultural Fine Seeds Project (2016LZGC023).