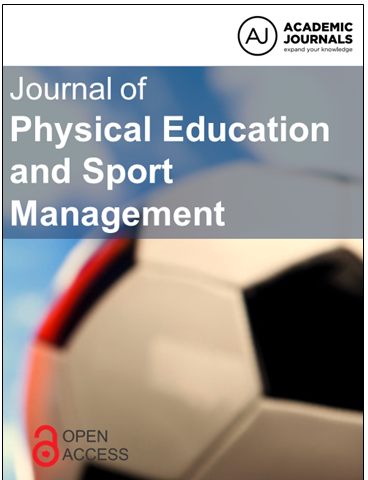 Physical activity has been described as any action where an individual is moving (Ortiz-Castillo, 2011) and defined by the Centers for Disease Control and Prevention (CDC, 2010) as “any bodily movement produced by the contraction of skeletal muscle that increases energy expenditure above a basal level. In these guidelines, physical activity generally refers to the subset of physical activity that enhances health” (Letter P para. 1). In this current review, physical activity is broadly defined as bodily movements or activities such as aerobic activities, sport and motor skill performances, play, and exercises as well as muscle and bone strengthening activities (CDC, 2003; United States Department of Health & Human Services, 2008). Some of the benefits of physical activity  participation  for  children  with  ASD  have   been identified in past studies (Levinson and Reid, 1993; Todd and Reids, 2006). For example, research confirms that participating in physical activity allows children with ASD to gain positive experiences with their typically developing peers (Healy et al., 2013). ASD is a continuum of disabilities that is rapidly increasing in the United States and elsewhere, yet the etiologies of ASD are still largely unknown (Doheny, 2008; Lerman et al., 2004). Children with ASD often exhibit stereotypic autistic behavioral tendencies that can be delineated into three categories, which are: (a) lack of social interaction, (b) poor communicative skills, and (c) repetitive and restricted behaviors. Children often exhibit these behavioral tendencies during physical education (PE) classes and this negatively affects their class  participation (Obrusnikova and Dillon, 2011). For instance, Obrusnikova and Dillon (2011) indicated that physical education teachers and school staffs are challenged to engage children with ASD in physical activities during classes. In a preliminary experimental study in the adapted physical education (APE)/activity profession, Schleien et al. (1988) sought to determine the effects of a collaborative socio-motor, APE/therapeutic recreation curriculum on the social play and motor development of students with autism and their typically functioning peers in an integrated general physical education (GPE) program. The children with ASD participated in the intervention program called Special Friends, which focused on teaching social skills and fundamental motor skills with typically functioning peers. Based on the analyses of the data, Schleien et al. (1988) reported that the Special Friends program reduced inappropriate behaviors with simultaneous increases in appropriate behaviors of the children with ASD.

In addition to specially designed curriculum arrangements and other factors (e.g., facilities, supports from peer groups) linked to students’ engagement in physical activity environments, parental influence is a salient factor in whether or not children with ASD are to become and remain physically active. Mindful of parental influence, An and Hodge (2013) explored the experiences and views of parents who had children with ASD and other developmental disabilities toward PE services. Based on the results, it was reported that parents took on the role of advocates for their children to have physical activity opportunities at school and within the community. The parents however were concerned about physical education programing due to a lack of communication between them and their children’s general physical education (GPE) teachers. Parents value their children’s education including physical education programming, but expectations of parents are suppressed where there is a lack of effective communication with GPE teachers (An and Hodge, 2013; Obrusnikova and Miccinello, 2012).

Over the years, researchers have analyzed variables associated with physical activity participation of children with ASD within schools and elsewhere. For example, Bandini et al. (2013) compared the physical activity (PA) levels between children with and without ASD. Their findings indicate that children with ASD had lower PA engagement levels compared to their aged group peers. In a systematic literature review, Lang et al. (2010) summarized studies about children with ASD in PA contexts, especially how physical exercise programs had influence on participants with ASD. They reported that most researchers commonly have reported that exercise and fitness programs can impact people with ASD in positive ways. For instance, studies show that participating in regular physical fitness and exercise programs provides opportunities for individuals with ASD to reach many benefits, such as increasing their socialization and experiencing inclusion. In addition, researchers had advocate for physical activity programming for students with ASD toward the acquisition and development of the mature motor skills (Schultheis et al., 2000). 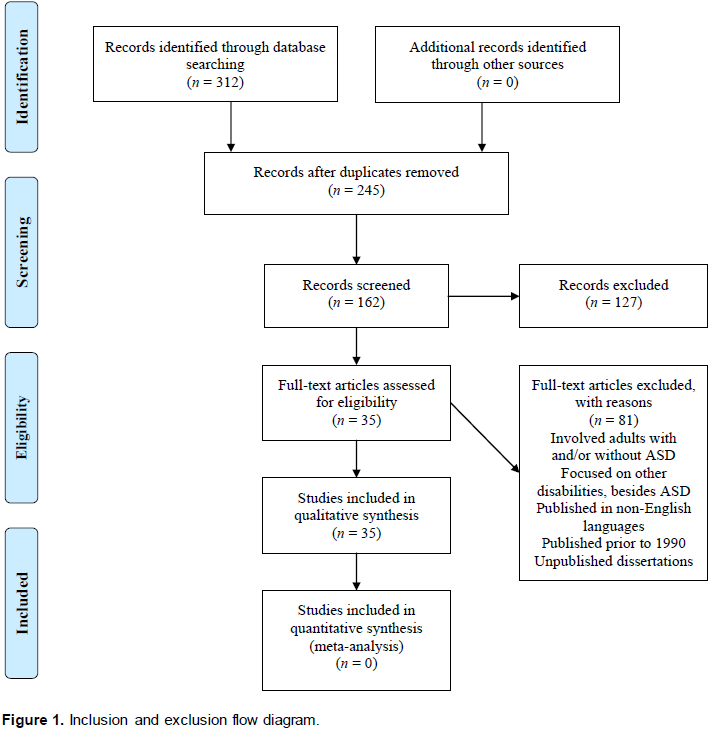 Data analysis
The authors then reviewed 35 articles that met the inclusion criteria. Upon review of articles, the authors independently coded and later summarized key components of each study which included the purpose of the study, methodology used, participants, quality indicators, and outcomes. More explicitly, thematic analysis was used in analyzing the key components (Morse, 1994) of each study. The analysis entailed reading each article several times. Specifically, the authors followed three-steps to analyze the articles reviewed. In the first step, we read all 35 articles for familiarity with the contents while gleaning relevant data about the participants, sampling strategies, research paradigm/designs, measures/protocol, and outcomes/findings of studies. Next, each researcher read the articles over again and highlighted quality indicators that stood out, particularly those that were significant to the sampling strategies, research designs, and measures/protocol. In this step, we also added labels and structural descriptions to the highlighted quality indicators for further discussion. Finally, we again read each article carefully and independently to generate thematic statements or phrases. By way of reading each article repetitively, more thoughtful and richer descriptions of the thematic categories were identified. The authors then reviewed the thematic categories that allowed them to unpack (that is, explain and elaborate) the major themes. Afterward, an expert in conducting qualitative research and using thematic and content analysis procedures was invited to review the thematic categories and themes, and to confirm the accuracy of the authors’ interpretations.

Included in this literature review were 35 peer-reviewed journal articles (Table 1), which were identified through the aforementioned search methods and met all of the inclusion criteria. Quality indicators of the studies (e.g., instrumentation validity and reliability and trustworthiness criteria, as applicable) are summarized in Table 2. The 35 articles included in the analysis covered a range of foci and approaches regarding children with autism spectrum disorders and physical activities. Overall, there were five major thematic areas of focus. These were studies focused on: (a) comparisons of PA levels between children with ASD and their typically functioning peers, (b) physical activities patterns of children with ASD, (c) barriers that impede participation of children with ASD in PA, (d) the benefits of participating in PA and exercise for children with ASD, and (e) strategies for engaging children with ASD in PA in such settings as physical education classes. 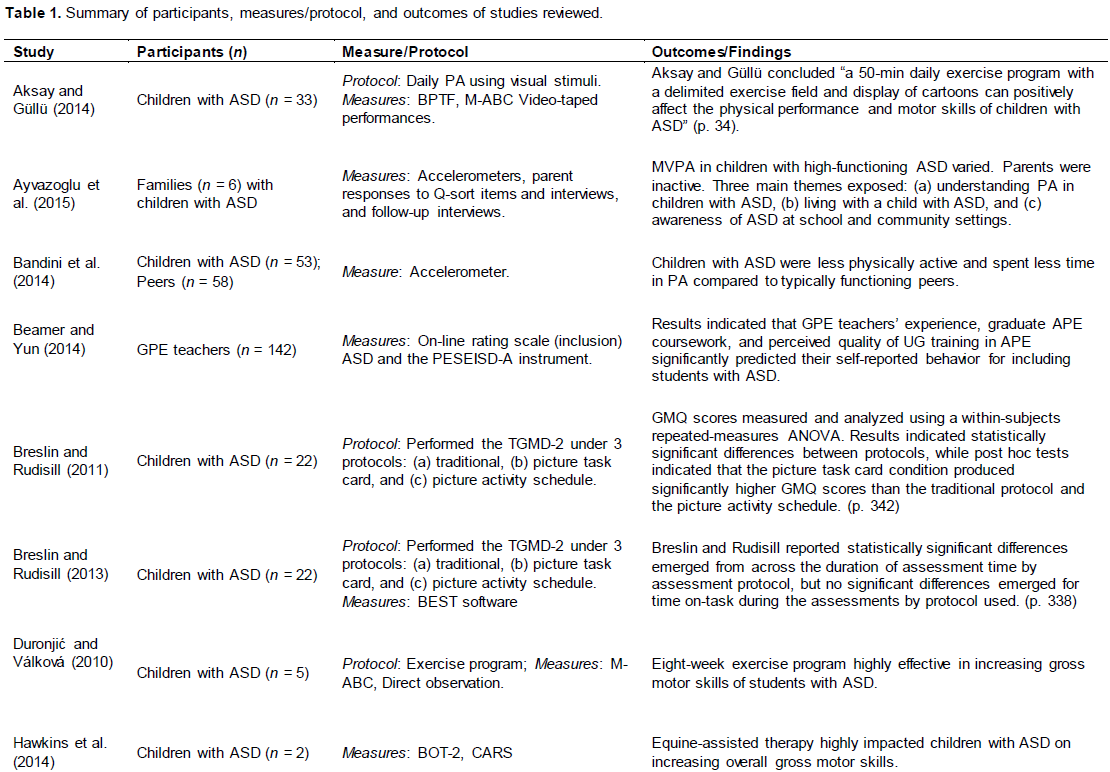 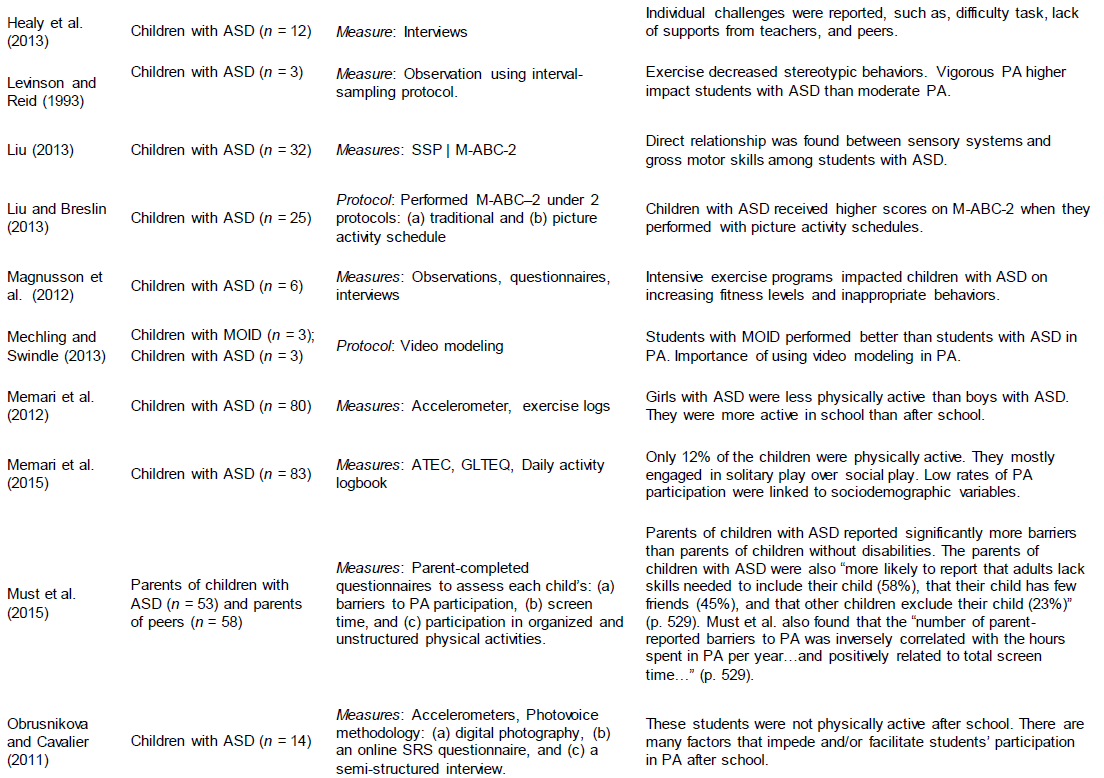 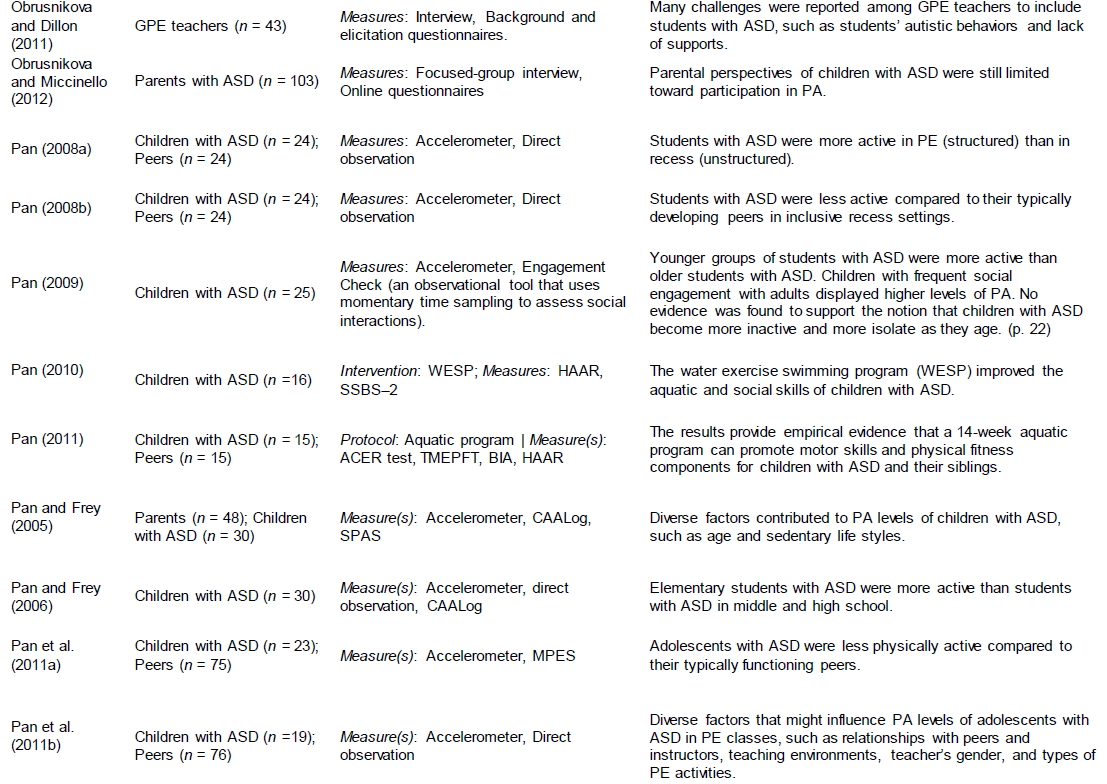 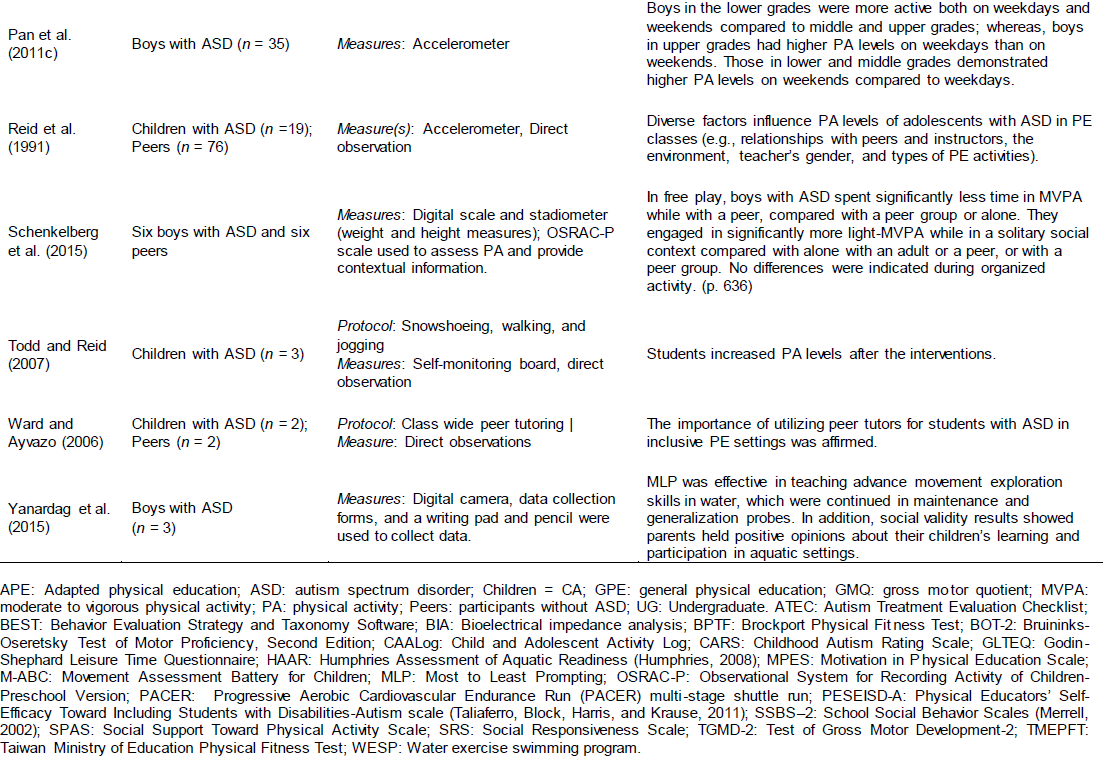 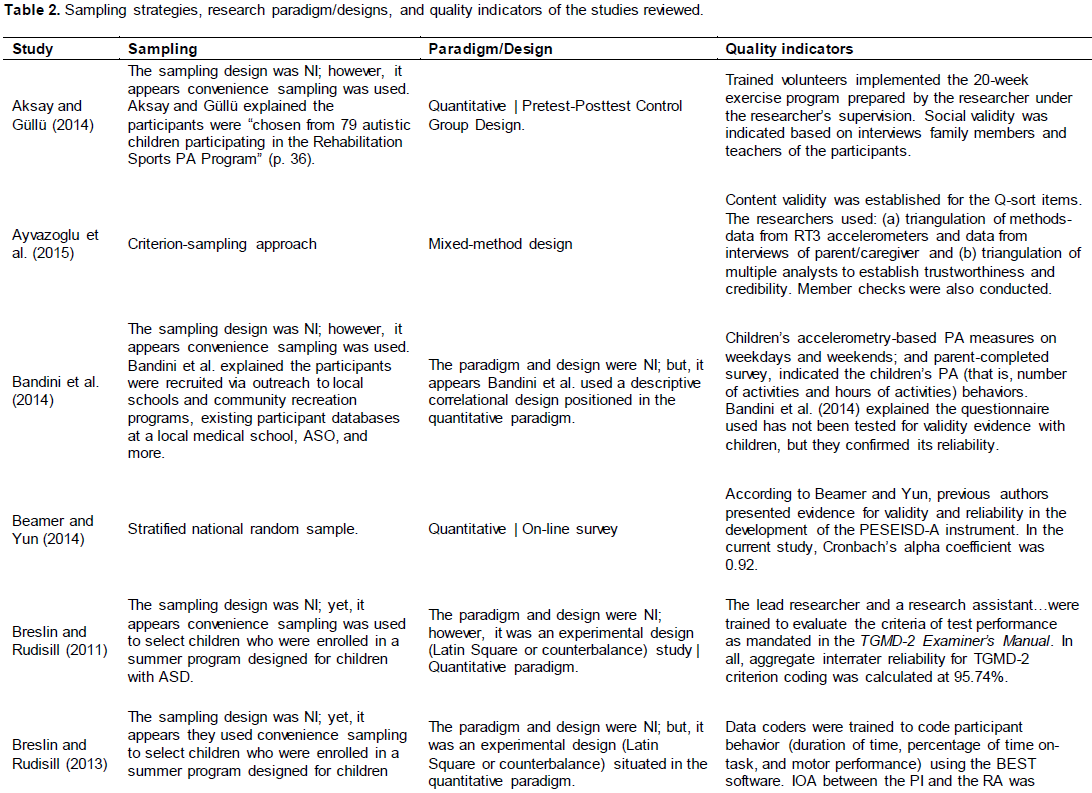 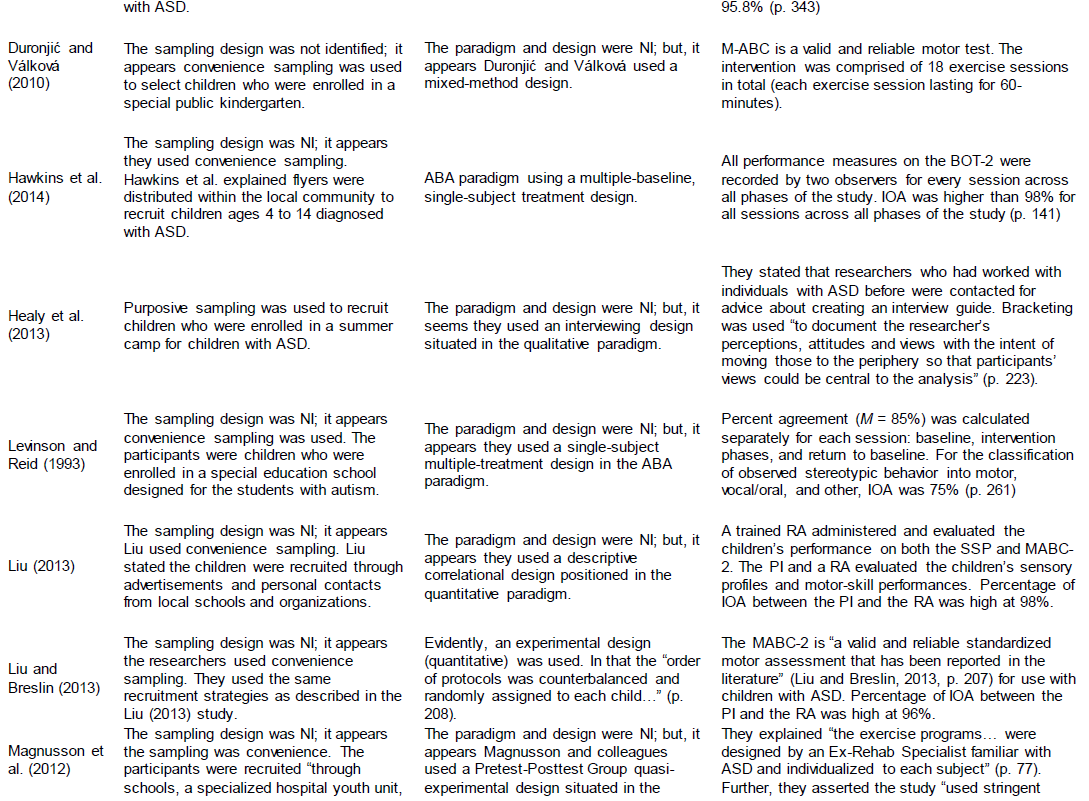 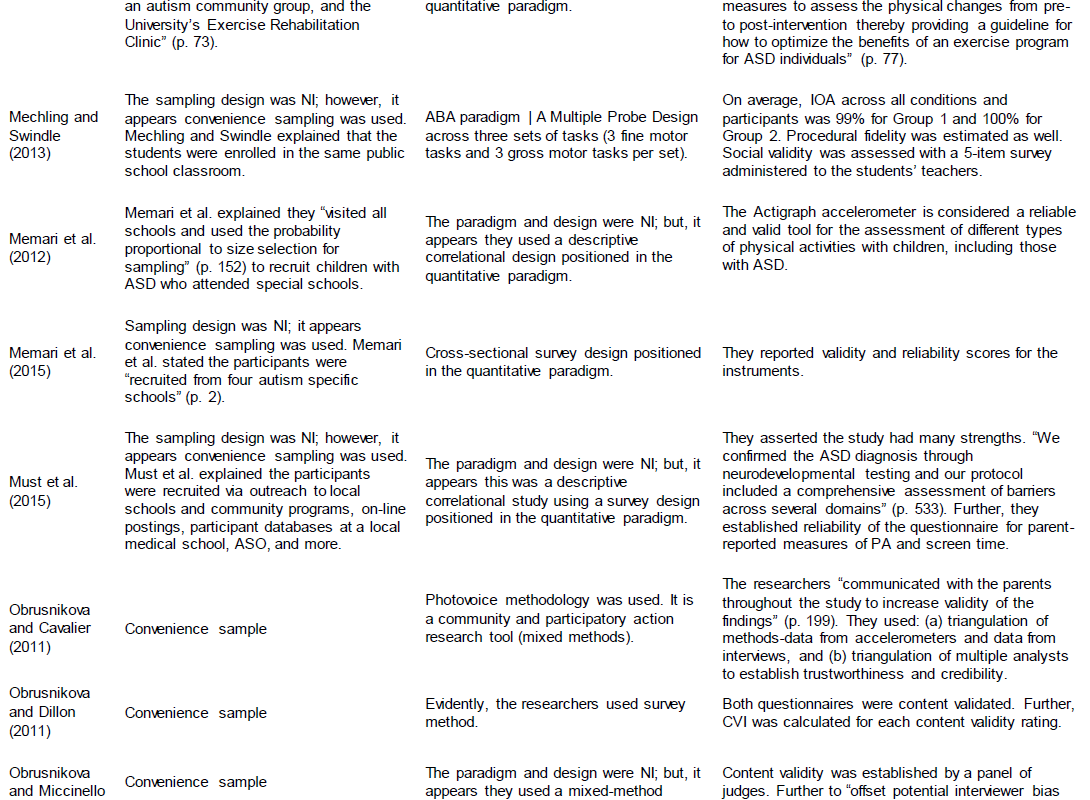 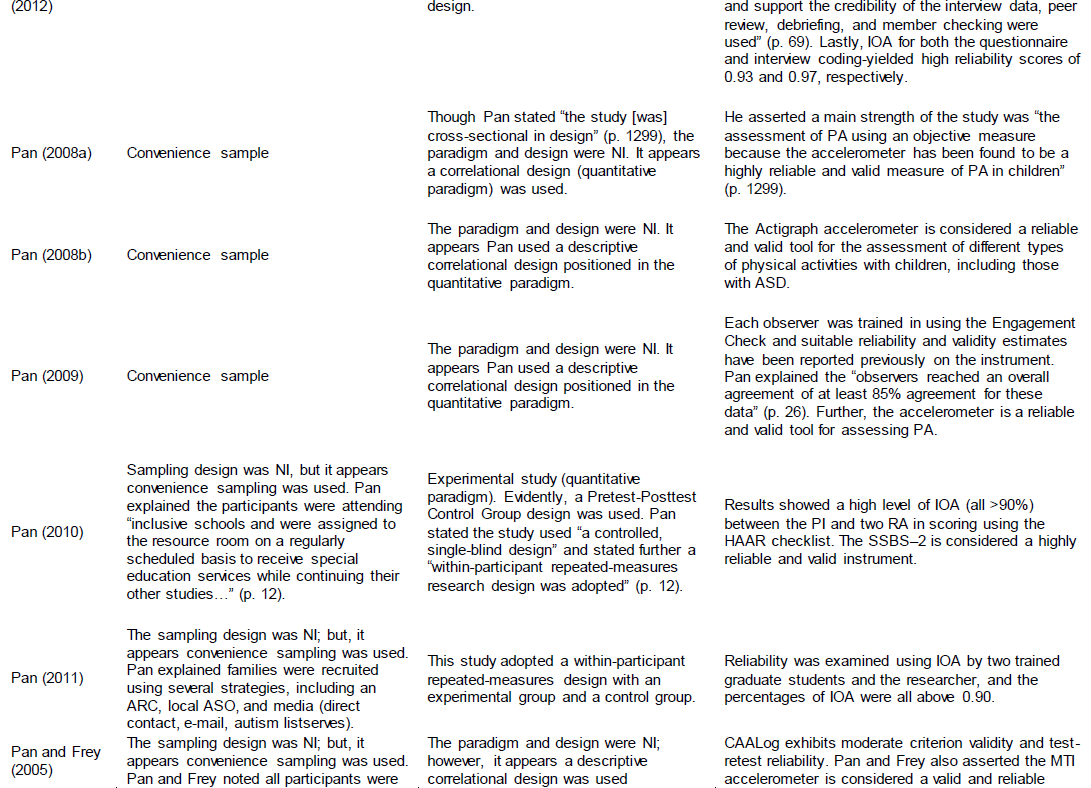 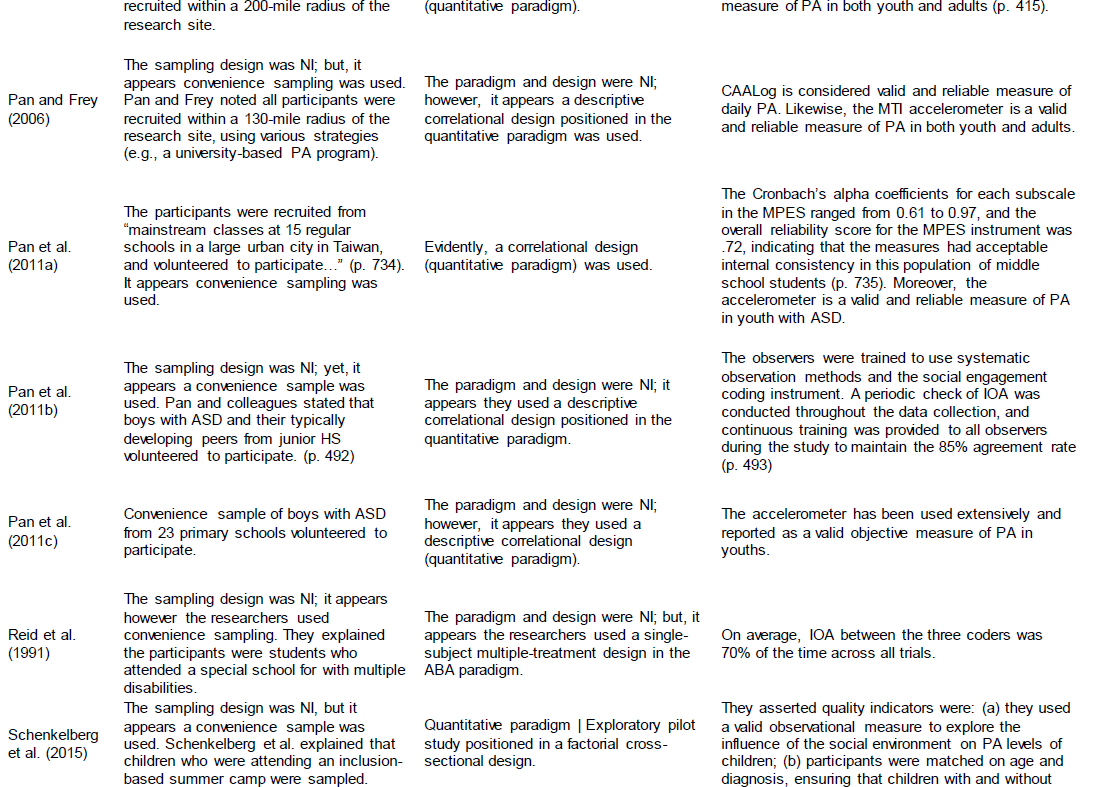 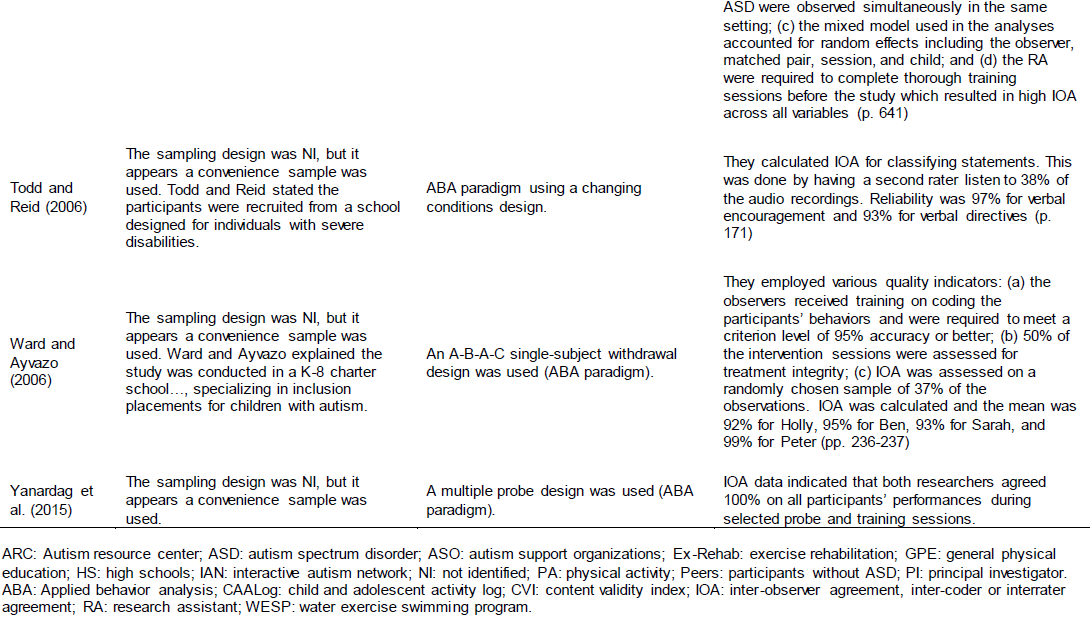 The purpose of this literature review was to describe research on strategies used in engaging children with autism spectrum disorder in PA. Stated differently, the current synthesis of the literature was to describe the overarching characteristics of empirical studies published in peer-reviewed journal articles and to present their major findings with regards to children with ASD and PA. The selected studies provide ample information and perspectives about children with ASD in PA contexts. Researchers have found that children with ASD generally lack motor skill efficacy compared to their typically functioning peers (Bandini et al., 2013; Pan, 2008a, 2008b, 2009; Staples and Reid, 2010).

The next step is to find what Evidence Based Practice (EBP) models can be accessible to physical education, especially in teaching children with ASD. A variety of interventional programs have been implemented for teaching children with ASD to succeed. In fact, some interventional strategies have persistently been used for teaching children with ASD in educational settings. Houston-Wilson and Lieberman (1999) provided examples of using EBP models in physical education, such as establishing well-structured environments and organizing tasks based on students’ goals. They also emphasized practical teaching strategies, such as using picture boards, selecting appropriate verbal prompts, and providing clear task presentation.

Promptings can be great tools for teachers and parents to reinforce children active participation in PA and exercise (Reid and Cauchon, 1991). Using prompts can help children to understand tasks and to stay on tasks for long durations of time. Using video modeling can also be adoptable in PA contexts (Mechling and Swindle, 2013), because children with ASD can easily respond to visual stimuli (Aksay and Güllü, 2014). The method of peer assisted learning can be beneficial to include students with ASD in PE (Schleien et al., 1988; Ward and Ayvazo, 2006). Acceptance from their peers without disabilities can be very important factor for children with ASD to succeed in inclusive GPE because they often feel isolated from their peers and teachers (Healy et al., 2013).

In all, the major findings exposed in the current literature review indicate that children with ASD tend to have lower PA engagement levels compared to their aged group peers. In physical education, students with ASD consistently have lower PA levels compared to their typically functioning peers. On the other hand, specially designed curriculum arrangements (e.g., class-wide peer tutoring) as well as the level of parents’ involvement, community facilities, and support from peer groups are salient determining factors in influencing whether students with ASD become and remain physically active.

However, some of the previous studies reviewed in this paper lack strong evidence of generalizability or transferability. In such cases, the reader is cautioned about generalizing or transferring the results to other contexts given the limitations of such works (Morse, 1999). The criterion of transferability is important to consider because it determines whether a qualitative inquiry can be replicated in other similar settings (Morse, 1994).

Quality indicators in both quantitative and qualitative research studies include such aspects as meticulous data collection strategies (e.g., multiple probing interviews with participants), detailed descriptions of research procedures, and systematic coding techniques (where applicable). Therefore, researchers need to include detailed and thorough descriptions of research procedures as much as possible including settings and participants in order to increase the possibility of generalizability or transferability (Table 2).

In conclusion, understanding autistic behaviors is the first step for teachers to modify their class structures and to practice effective teaching strategies. In working with students with ASD, empirically-based teaching strategies include structured class environments, clear direction, using visual cues, and scheduling. These teaching strategies should be accessible to increase children participation in physical activity.

Future research should be conducted to identify additional empirically-sound and accessible teaching strategies for children with ASD based on functional and analytic approaches.