Many sports activities are performed on school fields after classes finish for the day (Sport Council Wales, 2009; Edwards et al., 2011; Australian Bureau of Statistics, 2012). Engaging in these school-based extracurricular sports activities(SBECSA) helps students to improve their physical, mental, academic, and social development (Fredricks and Eccles, 2006; Barnett, 2007; Dotterer et al., 2007; Lipscomb, 2007; Shernoff and Vandell, 2007; Schaefer et al., 2011; Ministry of Education, Culture, Sports, Science and Technology in Japan [MEXT], 2012). Considering these benefits, SBECSA should be actively encouraged for positive youth development. However, there are several difficulties faced in terms of coaching and management of these programs such as lack of teachers who can coach SBECSA expertly (Yamagata Prefecture Board of Education, 2010), the transfer of SBECSA teachers to other schools causing elimination of the SBECSA (Tokyo Metropolitan Board of Education, 2007), and considerable workload burden for teachers to manage the SBECSA (MEXT, 1997; Japan Senior High School Teachers and Staff Union, 2008; Whiteley and Richard, 2012). Thus, managing SBECSA using teachers as the primary coaching resource provides challenges to the current maintenance of these programs.

Previous surveys and studies have attempted to clarify the facilitators and barriers to effectively recruiting and using external coaches (Kanagawa Prefecture Board of Education, 2008; Miyagi Prefecture Board of Education, 2008; LaVoi and Dutove, 2012). However, most of them were conducted with a limited number of questions and limited sample groups; thus, the facilitators and barriers in the recruitment of external coaches may be only partially explained.

A total of 1,880 teachers who worked at a public junior high or high school were given a cross-sectional self-administered questionnaire. Two hundred and fifty three teachers responded to the survey (response rate: 13.5%) and were included in the study analyses. Detailed participant characteristics are shown in Table 1. The number of teachers who worked at junior high schools and high schools were 107 (42.3%) and 142 (56.1%), respectively. There were 71 physical education teachers (28.1%). Sixty-five teachers (25.7%) managed SBECSA using external coaches and 163 teachers (64.4%) managed SBECSA without the use of external coaches. 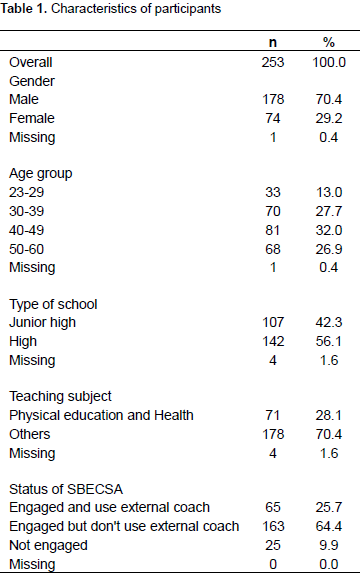 The questionnaire contained 50 items assessing perceived facilitators and 45 items assessing perceived barriers to using external coaches in SBECSA. The items covered all facilitators and barriers revealed in a previous study that were considered representative of the target population based on exploratory qualitative analysis (Aoyagi et al., 2013a). Therefore, the questionnaire was considered to have high content validity (Creswell and Plano Clark, 2007). Participants were asked, “How do you perceive each item as facilitator (or barrier) to the use of external coaches?” Responses were set on a six-point scale ranging from “not applicable at all (0)” to “very applicable (5)”. Each participant was also asked to complete a series of sociodemographic questions about their gender, age, type of school (junior high school or high school), and teaching subject. Whether or not they manage any SBECSA and make use of external coaches was also asked.

Request letters for participation in the study along with a set of questionnaires (including instructions and a consent form) were first sent to the principals of the schools that had been randomly selected. The principals then distributed the questionnaire to teachers in the school. Finally, each teacher completed the self-administrated questionnaire and returned it to the researchers. The survey was conducted in 2012. Participants were informed of the purpose and design of the study, and all participants provided written informed consent. The research proposal was approved by the Ethics Board of Waseda University (No. 2011-241).

To estimate the importance of each facilitator and barrier, percentages of applicability were calculated. Responses of 0–2 were defined as inapplicable answers and 3–5 were considered applicable. Percentages of applicability among SBECSA teachers who do and do not use external coaches were calculated separately.  Chi-square tests (α = 0.05)  were  conducted  to  verify differences between the two groups for each facilitator and barrier. Any missing values were excluded. All analyses were conducted using IBM SPSS Statistics Version 21.

Of the 50 facilitators, more than half (50%) of the teachers indicated that 39 items were applicable (Table 2). Facilitators that over 90% of teachers reported to be applicable were: f1. improving technique of team members (96.0%); f6. desire to let team members become more skillful (92.8%); f10. providing stimulation for team members (91.5%); f15. growing in practice efficiency (95.2%); f16. having a diverse coaching method (93.6%); f17. being able to show examples of play (92.7%); f18. increasing practice method (90.2%); f34. inability of SBECSA teacher to coach technically (96.0%); and f38. having other viewpoints (91.6%). In terms of the system in place for recruitment of external coaches, more than half of teachers considered compensation and mediation systems as facilitators. 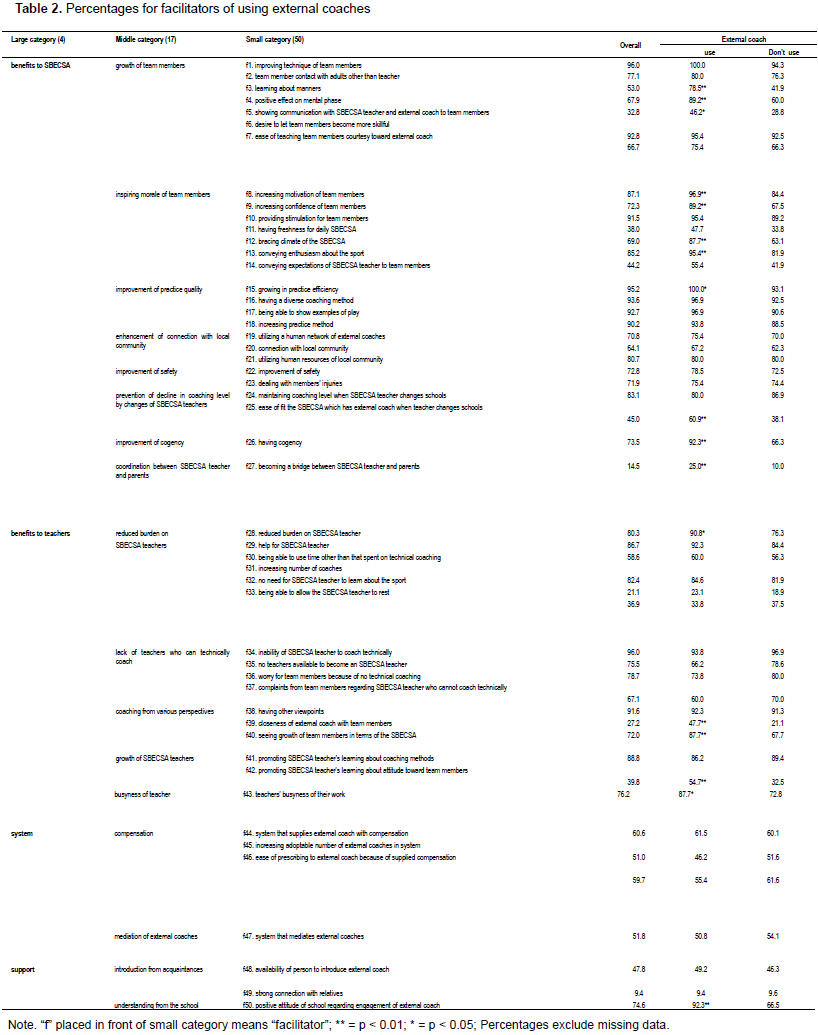 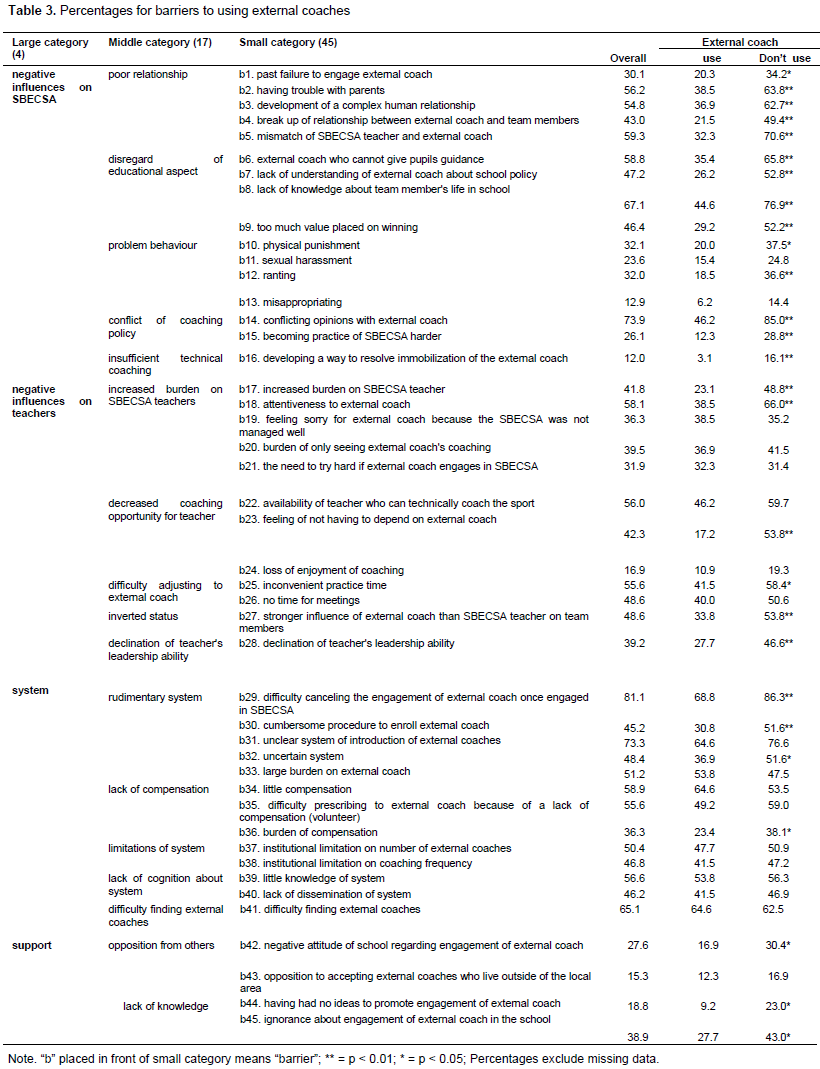 To explain the importance of facilitators and barriers in the use of external coaches in SBECSA and clarify whether differences existed in the perception of these items between SBECSA teachers who used external coaches or those that did not, a cross-sectional self-administrated questionnaire survey was given to junior high school and high school teachers across Japan. Nine facilitators perceived as applicable by over 90% of teachers could be categorized into general groups related to “growth of team members”, “inspiring morale of team members”, “improvement of practice quality”, “lack of teachers who can technically coach”, and “coaching from various perspectives”.

Considering these facilitators more fully, a lack of expertise would encourage an SBECSA teacher to recruit an external coach to gain various coaching perspectives and  improve  practice  quality  for  the  growth  of  team members, including morale. More than half of teachers also perceived compensation and mediation systems as facilitators to the recruitment of external coaches. Thus, state and local governments should improve and promote compensation support projects and human resource mediation systems that are currently in use in other areas of Japan (e.g. SSF, 2011; Kochi Prefecture Board of Education, 2013; Okayama Prefecture Board of Education, 2013) to promote increased use of external coaches. More SBECSA teachers who use external coaches, compared with those that do not, felt that understanding from their school was an important facilitator in their use of an external coach. It is not only the efforts of the  SBECSA  teacher but also support from the school principal and other teachers that are important in promoting recruitment of external coaches.

In terms of the overall perception of barriers by participants, the following explanations could be considered. First, it is difficult to find external coaches. Even if there is mediation system, difficulties in getting introduced to external coaches and in cancelling the engagement of external coaches might make teachers hesitate to go through the process. Further possible reasons contributing to this hesitation is that external coaches do not usually know much about team members’ lives in school, and they sometimes have conflicting opinions with SBECSA teachers. A previous report from a human resource organization indicated similar findings that a lack of transparency in the mediation system disrupted use of this system (Kanagawa Prefectural Center of Physical Education, 2007). Therefore, clear information on the processes involved is required for human resource organizations to properly manage mediation systems. Aoyagi et al. (2013b) suggested that implementing a trial period would be beneficial to identify the compatibility of an external coach with the SBECSA teacher and the team members (e.g. in terms of coaching principles, coaching method, and relationships). Given that SBECSA is activity organized through the school (MEXT, 2008, 2009), the guiding (coaching) principles of the SBECSA teacher should be at the core of the activity, with frequent communication between the SBECSA teacher and any external coach brought in.

As hypothesized, SBECSA teachers who currently  use external coaches found facilitators to be more important factors than barriers when it comes to recruiting external coaches. By contrast, SBECSA  teachers who do not use external coaches found several barriers to be the most important factors in terms of considering recruitment of an external coach. According to the theory of decisional balance, people who are currently acting out certain behaviors recognize facilitators (benefits/pros) more, while those who have not yet performed the behavior see barriers (burdens/cons) more (Marcus and Owen, 1992; Ling and Horwath, 2001). The results of the present study are thus consistent with the theory of decisional balance. Although there is a possibility of a ceiling effect with respect to many of the items in the questionnaire, from the perspective of this theory, enhancing the facilitators and reducing the barriers that were shown to have significant differences in perception between groups would be effective in helping teachers make a decision about using external coaches. These particular facilitators and barriers could potentially be applicable to a large population of teachers. However, the facilitators and barriers that were perceived important only by few teachers are also important; school principals and local policy makers should consider the usefulness of addressing these various facilitators and barriers on a case-by-case basis.

The current study has some limitations. First, the study used a self-administrated questionnaire, although the questions were developed through careful interview in a previous study (Aoyagi et al., 2013a). Second, the analysis was cross-sectional, thereby making it impossible to identify the cause and effect. However, the cause and effect relationship would not make a large difference in the ultimate practice of SBECSA because enhancing facilitators and reducing barriers would benefit teachers and promote recruitment of external coaches in both situations.

Despite these limitations, the present study adds quantitative support to the facilitators and barriers reported by Aoyagi et al. (2013a), which can be applied to improve  the  effectiveness  of external coach recruitment and use.

A high percentage of teachers perceived many facilitators and barriers as applicable to their decisions on whether to use external coaches.

The authors would like to thank all participating teachers and principals. The present study was supported by a Sasakawa Sports Research Grant (No. 120B3-010, 130B3-006) from the Sasakawa Sports Foundation, a Research Grant (No. 26-3450) from the Japan Society for the Promotion of Science, and the Global COE Program “Sport Sciences for the Promotion of Active Life” from the Ministry of Education, Culture, Sports, Science and Technology in Japan.