Prevalence of hepatitis B virus, its risk factors and co-infection with human immune deficiency virus among clients of voluntary counseling and testing center in Hosanna, Southern Ethiopia

Hepatitis B infection (HBV) infection is a serious public health problem worldwide and its co-infection with human immune deficiency virus (HIV) is common due to shared routes of transmission. An increased mortality due to accelerated hepatic disease progression and the frequent hepatotoxicity caused by antiretroviral therapy are the challenges in the clinical management of HIV. Epidemiological studies on HBV and HBV/HIV co infection are scarce in Ethiopia, particularly at the study area. The aim of this study was to determine the magnitude of HBV, its risk factors and co-infection with HIV among clients of a voluntary counseling and testing (VCT) center in Southern Ethiopia. A facility based cross-sectional study was conducted from 1st February 2016 to 15th March among clients of Nigist Eleni Memorial Hospital VCT Center. Data were collected by face-to-face interview and specific formula sheet as well recorded results of laboratory diagnosis of blood sample from each participant. Both descriptive and inferential statistics were used for data analysis. Multivariable logistic regression modeling was done to identify predictors of HBV. Overall, 331 participants were included in the study. The prevalence of HBV was 8.8%, HBV/HIV co-infection was found in 3.6%. Individuals with a history of multiple sexual partner [AOR = 10.3; 95% CI, 3.71 - 28.83], previous history of invasive procedure [adjusted odds ratio (AOR) = 10.88; 95% CI, 3.84 - 30.86] and history of surgical procedure [AOR = 9.2; 95% CI, 3.1 - 27.88] were identified as in dependent predictors of HBV infection. High HBV infection and HBV/HIV co-infection was found in the study. Previous history of surgical procedure, invasive procedure and multiple sexual partners were identified as independent predictor of HBV infection.

Hepatitis B infection is caused by the hepatitis B virus (HBV).which is an enveloped DNA virus that infects the liver and causes inflammation and hepatocellular necrosis (WHO,  2015;  Marcellin,  2009).  It  is  one  of  a serious public health problem worldwide (Adibi et al., 2012) and It is 50 to 100 times more contagious than HIV (Verma et al., 2011). Recently,WHO estimates the Global Burden of  Disease  study  as  viral  hepatitis accounts for  approximately 1.34million deaths annually, which is equivalent to the number of deaths from HIV/AIDS (1.3 million), malaria (0.9 million), and tuberculosis (1.3 million) (WHO, 2017; GBD, 2016). Globally, 350 million people are infected with HBV and 33 million people are infected with HIV. Next to Asia, Africa has been highly infected by HIV pandemic and the second for HBV infection. These regions are high endemic areas for HBV (Marcellin, 2009; Burnett et al., 2005). Ethiopia, being part of this region, is ranked as an area with medium to high endemicity for HBV infection, based on previous population surveys (Abebe et al., 2003). As Ethiopia is most hit by HIV infection (prevalence of 2.1%), the likelihood of HBV/HIV co-infection is expected to be high due to shared routes of transmission (FMOH, 2007). WHO set a goal to eliminate viral hepatitis as a public health problem by the year 2030 (WHO, 2016). However, in Ethiopia, there was no mass HBV vaccination to the general population; even the burden of HBV in the community is not adequately addressed. Moreover, information on the magnitude of HBV, its risk factors and prevalence of HBV-HIV co-infection are scarce. Therefore, this study was conducted among clients Nigist Eleni Memorial Hospital voluntary counseling and testing (VCT) center, to determine the prevalence of hepatitis-B surface antigen (HBsAg), its risk factors and prevalence of HIV co-infection. The results of this study will help health authorities and other concerned bodies to design interventions to improve the health status of people infected with HBV and HIV. Further, the study can provide base line information for other studies. So, the study is relevant for policy formulation and health care provision.

Facility based cross-sectional study was conducted at Nigist Eleni Memorial Hospital VCT center, Hossana, Southern Ethiopia, from 1st February 2016 to 15th  March. The VCT center at the hospital routinely gives HIV counseling and testing for clients. All individuals attending Nigist Eleni Memorial Hospital for VCT testing during the study period were eligible for inclusion in the study. The study area was Hadiya zone, Hossana town, Southern Ethiopia. There is one hospital in the town which serves more than 1.5 million people.

Considering the following assumptions: p = 7.7% (proportion of people infected by HBV) (Belayneh, 2015), Zα/2 is the value of the standard normal distribution corresponding to a significant level of alpha (α) of 0.05, which is 1.96 and desired degree of precision (d) of 3%, the computed sample size was 303 and by adding 10% non-response rate, the total sample size computed was 334. Participants were included in the study using systematic sampling technique. Every other two clients were included by considering the monthly average flow of patient from previous data. For data collection, two counselor nurses and one laboratory technician were recruited; and one supervisor was also recruited. Face-to-face interviews using pretested structured questionnaire were done to collect data on socio-demographic characteristics and other risk factors. Three milliliters of venous blood was collected from each patient. Serum was separated by centrifugation at 3000 rpm for 5 min after the blood has been clotted. Rapid HIV kits (HIV (1 + 2) Antibody Colloidal Gold (KHB, Shanghai Kehua Bio-engineering Co Ltd, China) was used as the screening test, followed by HIV 1/2 STAT-PAK® (Chembio Diagnostics, USA) if positive, where the result of STAT-PAK® is discordant with KHB, a third test, Unigold™ HIV (Trinity Biotech, Ireland, tie breaker)) were used to determine the result. The serum was also tested for HBsAg by one step according to the Guangzhou Wondfo Biotech Co., Ltd (Wondfo) instruction. This test has a sensitivity and specificity of 96.2 and 99.3%, respectively (Belayneh, 2015).

First, data were entered into Epi data 3.1 and exported to SPSS version 20 for analysis. Then, data cleaning (editing, recoding, checking for missing values, and outliers) was performed. Missing data were treated using multiple imputations. The basic descriptive summaries of patients’ characteristics and outcome of interest was computed. Bi-variate analysis was used to show the relation between HBV infection and various associated factors.  Finally, all associated variables that results (P < 0.2) with the outcome variable were entered into multivariable logistic regression model using backward likely hood ratio method to identify independent predictor of HBV infection. P-value < 0.05 was considered as statistically significant. Odds ratio (OR) with 95% confidence intervals (CI) were calculated as well.

The tool was adapted from different previous literatures and modified by the study context. It was first prepared in English and translated into Amharic, and then translated back to English by an expert who is fluent in both languages to ensure reliability. Training was given for data collectors and the supervisor on the objectives of the research, how to collect the data through interviewing approach, and data recording. Data collectors already trained for the test kits were used. Pre testing of the questionnaires was made on 16 VCT clients in the nearby district health center a week prior to the actual survey. Consequently, based on the feedback obtained from the pre-test, questions which needed clarification were revised and updated. Daily, the data were strictly revised for completeness, accuracy and clarity by the supervisors and principal investigator. In addition, the data were thoroughly cleaned and carefully entered into computer using Epidata version 3.1 using double entry verification.

Ethical approval was obtained from Hadiya zone health department. Verbal consent was taken from Nigist Elienie Mohammed Hospital and each participant after the purpose of the study was explained. They were told to withdraw at any time from responding to questions. Participants were informed that all the data obtained from them will be confidential and code was used instead of any personal identifiers. Individuals positive for HBV/HIV were linked to the hospital outpatient department (OPD) for further management. 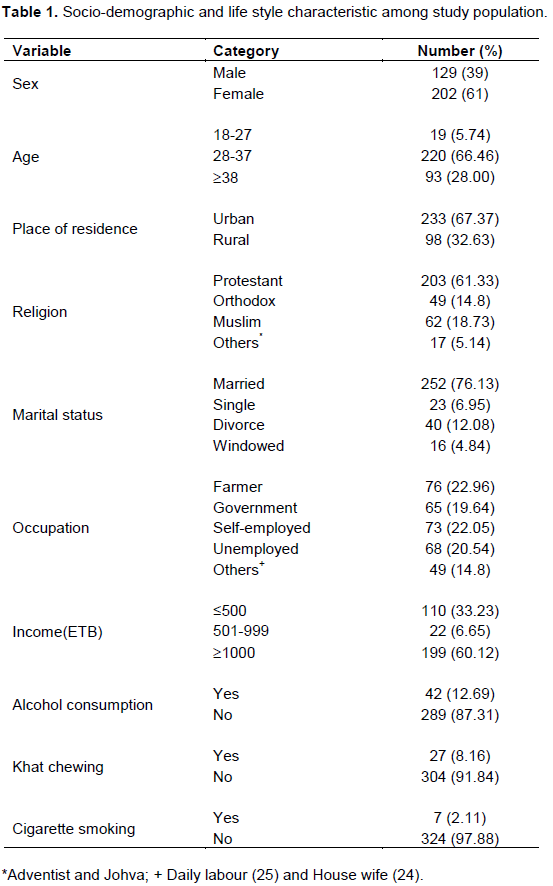 As regards the health status characteristics shown in Table 2, 8.15% of participants had a history of surgical procedure, 8.76% of invasive procedures, 6.61% of sexually transmitted infections, 9.97% of multiple sexual partners, 10.57% of using sharing sharp materials, and 4.5% of blood transfusion. 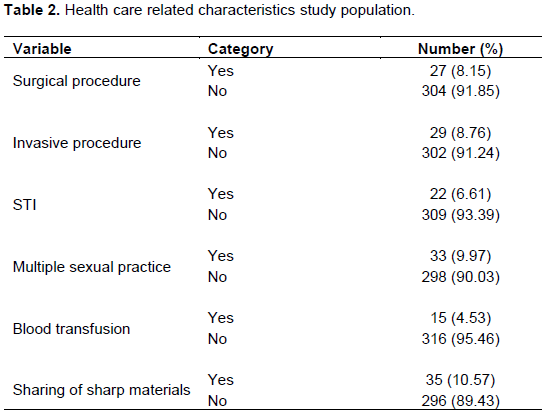 Prevalence of HBV infection and co-infection with HIV 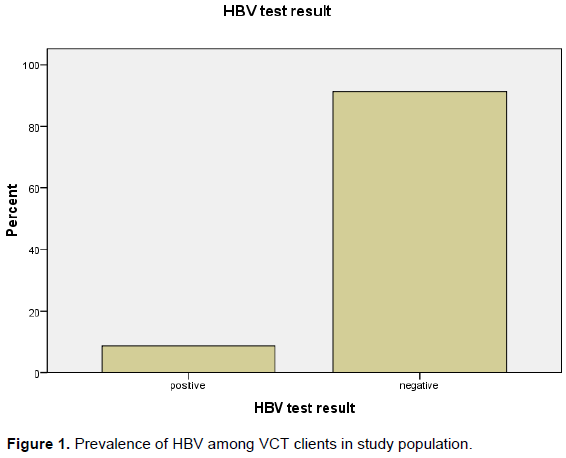 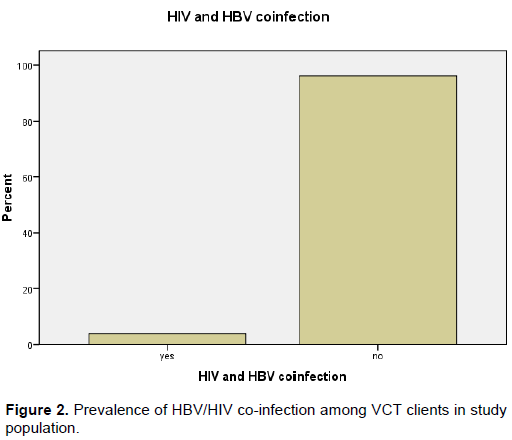 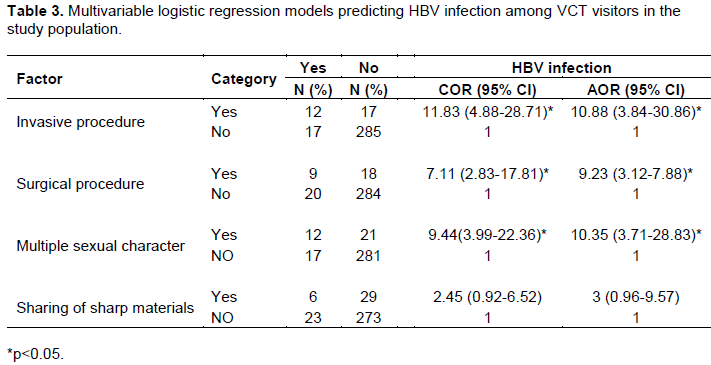 Overall, the prevalence of HBV among VCT clients of Nigist Elienie Mohammed Hospital VCT center was 8.8% and the magnitude of HIV/HBV co-infection was 3.6%. A study conducted in Addis Ababa (Shimelis, 2008) and Shashemene (Negero et al., 2011) revealed a 5.7% HBsAg prevalence among VCT clients, which is lower than the present study. The difference might be due to difference in socio-economic factors. A prevalence of almost 4% was also reported among pregnant women in Jimma (Awole and Gebre-Selassie, 2005). A community based sero-epidemiological study conducted in Addis Ababa revealed 7% HBsAg prevalence (Abebe, 2003). A hospital based survey at South Gondar showed 6.1% HBsAg prevalence (Balew, 2014). The HBV/HIV co-infection rate in this study is high is consistent with a study done in sub Saharan Africa (Burnett, 2005), Shashemene (Negero et al., 2011) and at Hawassa (Belayneh, 2015). However, a study done at VCT centers in Addis Ababa showed no significant difference between HBsAg carriages per HIV status (Shimelis, 2008). Other study among pregnant HIV infected women in the USA showed a much lower prevalence of HBV as compared to this study (Particia, 2005). The justification of this finding could be due to the fact that in most developed parts of the world the prevalence of HBV infection is low (Burnett, 2005). There was a higher prevalence of HIV/HBV co infection (13.6%) observed in a systematic review conducted in Ghana (Agyeman and Oforiâ€‘Asenso, 2016). The difference could be due to socio-economic difference in the study population.

In  this  study,  a  history  of  invasive  procedures   was significantly associated with HBV infection. This is in agreement with a study conducted in Jimma (Awol and Gebre-Selassie, 2005). A previous history of surgical procedure showed significant association with HBV infection. This result is in line with the results of the studies conducted in Ethiopia at Hawassa (Belayneh, 2015). Individuals with history of multiple life time sexual partners were more likely to show HBsAg positive. This finding was in line with a study conducted inNigeria (Nwokediuko, 2009).

The study has the following limitations. First, since we employed a cross-sectional design, we cannot infer causality. Secondly, the findings of the present study were   based   on     rapid   test   kit   which    might   have underestimated the true prevalence.  In this study, HBV DNA was not detected by polymerase chain reaction  due to  unavailability   of  resources,  as  it  would  allow  early diagnosis  of  HBV  infections  before  surface  antigen  of HBV were detectable in serum. So, prevalence may be underestimated.

A high proportion of HBsAg and HBV/HIV co-infection was found in the study area. A previous history of surgical procedure, invasive procedure and multiple sexual partners was identified as independent predictor of HBV infection. This indicates the importance of strengthening preventive measures including vaccination to risky population and IEC to the general population about transmission of HBV. In addition, routine HBV screening program at VCT centers should be integrated, particularly for clients found positive of HIV antibody. So, HBV carriers could be identified early and managed appropriately.

The authors thank the study participants, supervisors and data collectors for the information provided, without which this work would not have been possible. They also thank Nigist Eleni Hospital for support in duplicating questionnaire.