Vitamin-D deficiency and insufficiency and quality of life in Jeddah, KSA: Is there any evidence of association

Vitamin D (VD) deficiency and insufficiency have been linked to poor quality of life (QoL); general weakness, fatigue, and nonspecific pain. Despite abundance of sun light, there is a wide spread VD deficiency in the Arabian Gulf countries. However, the impact of VD deficiency on the quality of life has not been well documented in the Arabian Gulf countries, including the Kingdom of Saudi Arabia (KSA). This study aims to analyze the effect of crude vitamin D levels on quality of life in none pregnant Arab women in the Kingdom of Saudi Arabia (KSA). The study was a prospective cross sectional study, using a sample of 152 subjects of patients aged 13 years and above attending the outpatients’ clinic at King Faisal Hospital, Kingdom of Saudi Arabia (KSA). The study collected anthropometric and demographic variables, in addition to a small plasma sample from all subjects to measure VD levels, calcium (Ca), phosphorus (P), parathyroid hormone (PTH) and lipid profile by standard methods. Subjects were categorized according to VD levels as normal (>30 ng/ml), insufficiency (21 to 29 ng/ml), or deficient (≤ 20 ng/ml). The RAND Short Form -36 (SF-36), which consists of 36 questionnaire items was used to measure (QoL) across eight domains for both physically and emotional wellbeing: physical functioning; role limitations due to physical health; role limitations due to emotional problems; energy/fatigue; emotional well-being; social functioning; pain and general health. Logistic regression analysis was used to investigate the associations between VD levels and QoL. The mean scores in the total sample were 65.5 (SD ±14.6) for the physical component summary (PCS) score and 58.2 (SD ±15.2) for the mental component summary score (MCS). Vitamin D deficiency was overwhelmingly high among subjects across age and sex. The PCS and MCS QoL scores were also lower than the average. However, the study found no association between VD levels and QoL, presumably due to sample size and con-founders. Further studies are needed to identify the impact of VD levels on perceived QoL.

Ethical statement
The protocols of this study were approved by the Ethical Review Committees at King Faisal Hospital, KSA. All subjects gave an informed consent prior to their participation.
Study design
The study is a cross sectional study, conducted in the outpatients’ clinic of King Faisal Hospital, Kingdom of Saudi Arabia (KSA) during the 2013.
Subjects
Subjects were 152 male and female patients, aged 13 years and above, reporting to the outpatients’ clinics of King Faisal Hospital in
KSA during 2013. The study patient population was composed of two groups of subjects: juveniles of 13 to 18 years age and adults, 19 years and above, presented with VD deficiency and insufficiency and no pregnancy.
Inclusion criteria
Healthy individuals, juveniles of 13 to 18 years old and adults, with weakness, fatigue and nonspecific pain with 25-hydroxyvitamin D (25-OHD) levels: ≤ 20 ng/ml (VD deficient), 21 to 29 ng/ml (VD insufficient) and ≥ 30 ng/ml (VD sufficient).
Exclusion criteria
Pregnant women (before or during the study) and women with an abnormal level of serum parathyroid hormone (PTH) (>55 pg/ml) and serum calcium (> 10.4 mg/dl), known to have illnesses such as granuloma forming disorder (e.g. Tuberculosis), lymphoma, sarcoidosis or any type of cancers were excluded. Subjects on vitamin D supplementation or any forms of calcitriol (1,25 (OH)2 D3) were also excluded.
Anthropometric measurements
Qualified research nurses were trained to assist subjects in completing self-reported questionnaires. Nurses measured the height, weight, and waist circumference of participant patients by a calibrated electronic scale with mounted stadiometer from Seca (Model 769; Seca, Hamburg, Germany). Before taking the measurements, all subjects were asked to wear light clothing and no shoes. Thereafter, subjects were instructed to stand straight with their heads, backs and buttocks vertically aligned to the height gauge. Measurements of height and weight were taken and rounded to the nearest 0.5 cm and 0.5 kg, respectively. The standard tape was used to measure waist circumference (WC) at a point immediately above the iliac crest on the midaxillary line, at minimal respiration and round it to the nearest 1.0 cm.  Overall, three separate measurements of height, weight, and WC were recorded for each participant and averaged for analysis to increase precision. Body mass index (BMI), the ratio of weight to height squared [Weight (kg)]/ [height (m)] 2 was calculated. Subjects with (BMI < 20 kg/m2), BMI 20 < 25 kg/m2), (BMI of 25 to 30 kg/m2) and BMI >30 kg/m2 were classified as underweight, normal weight, overweight and obese, respectively.
Blood sampling and methods of analysis
A 10 ml venous blood was collected after 12 h of an overnight fasting. The blood samples were collected by a registered staff nurse using vacutainer system from Becton Dickinson with 20 G needles (USA). The blood samples were divided into two tubes; plasma EDTA (5 ml) and Serum (5 ml) and were immediately centrifuged by 3000 g/15 min at 4°C within 2 h. Samples were separated, alliqouted, and stored in deep freezers (-80°C) for analysis. Plasma was sued to measure lipid profile, and FBS, whereas, serum was used to measure HBA1c, calcium (Ca), PTH, 25(OH) D3, and insulin. Homeostasis model assessment of insulin resistance (HOMA-IR) was calculated based on pairing FBS and Fasting Blood Insulin to establish a measure for insulin resistant: HOMA-IR = [{FBS (mmol/L)} * {Insulin (IU per ml)}/22.5]. ELISA was used to measure serum 25(OH) D. All tests and analysis were carried out by the Clinical Diagnostic Laboratory, at King Faisal University.
Quality of life
The study used the RAND Short Form-36 (SF-36), a 36 item questionnaire to measure quality of life (QoL) across eight domains of physical and emotional wellbeing: physical functioning; role limitations due to physical health; role limitations due to emotional problems; energy/fatigue; emotional well-being; social functioning; pain and general health. Data was converted in a two stage manner. First, each question response was related to the corresponding pre-coded numeric value. Secondly, scores were translated and the average for each of the eight scale components was calculated. Moreover, the study summarized the physical QoL (Physical Component Summary; PCS) from the corresponding physical activity components. Similarly, emotional QoL (Mental Component summary; MCS) was calculated as the average of the relevant mental health components. Finally, a z-score was calculated for each of these two components to transform the data into percentile.
Statistical analysis
STATA software version 13 was used for data analysis. Descriptive and inference analysis using the t-test, where applicable, were carried out. To compare categorical variables, the study used the Chai square test and the Fisher exact test, wherever appropriate, to analyze the data. Multivariate logistic regression was used to identify independent correlates between VD-levels and QoL measured by PCS and MCS scores. A p-value < 0.05 was used as the statistical significance level.

The socio-demographic characteristics of participant subjects (n=152) are summarized, according to sex in Table (1). Overall, 21% of participants were males and the majority (79%) was females (Table 1). The mean age of male patients was 38.9 years while the mean age among female patients interviewed was 33.9 years (p=0.003).  The mean BMI among male patients was 27.1 compared to 26.3 among females but the difference was not significant. There were significant differences in SBP and DBP, though both were within the normal range. The mean age, height and weight of males were significantly higher than those of females (Table 1).

The analysis of the QoL physical component summary (PCS) from the corresponding physical activity components and the emotional QoL mental component summary (MCS) from the relevant mental health components showed that, the mean scores in the total sample were 65.5 (SD ±14.6) for PCS and 58.2 (SD ±15.2) for MCS. The linear regression analysis did not show any significant relationships between VD levels and both PCS and MCS scores (Table 2). However, when vitamin D was categorized as insufficient, deficient, or normal, it was observed that subjects with normal levels of VD have had higher mean PCS scores, but the pattern is not similar for the equivalent MCS scores (Figures 1 and 2). 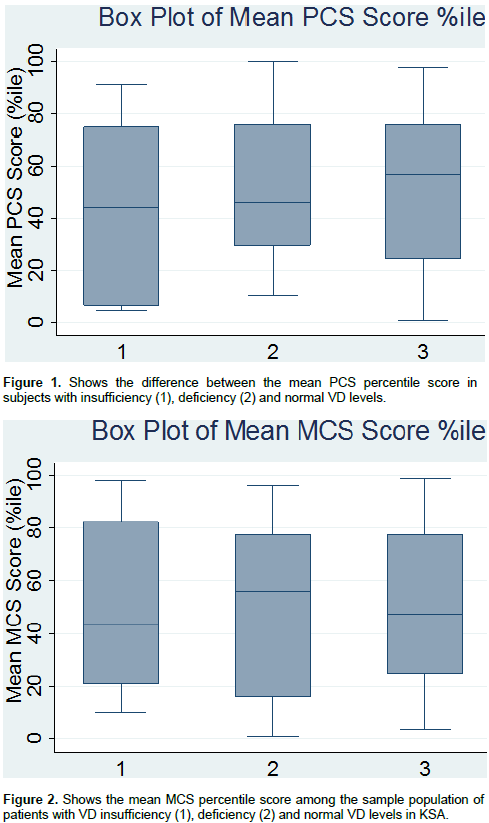 As stated earlier, a sizeable evidence shows that VD deficiency and insufficiency are widely prevalent in the worldwide and are commonly thought to be responsible for a variety of chronic disease states, including diabetes, cancer, and depression. Routine vitamin D supplementation is clearly needed to meet vitamin D requirements, but little is known so far regarding the effect of vitamin D supplementation on quality of life.  This study attempted to measure and assess relationships of serum 25-hydroxyvitamin D [25(OH)D] (Ecemis and Atmaca, 2013; Holick, 2007) with quality of life in children, men and non-pregnant women in KSA, using (SF-36) and a number of anthropometric measures to examine whether emotional and physical performance, are related to VD deficiency and insufficiency. The study showed that an overwhelming majority of participant focuses on those that had clear VD deficiency. Similar findings were previously reported in the Arabian Gulf countries despite the abundance of sunlight, the major source for VD.
Although plausible genetic predisposition has been suggested, there is yet no strong evidence of causal factors as such. Nonetheless, we think that lack of adequate sun exposure due to cultural reasons and lifestyle (with limited outdoor activities) may have contributed to such low levels of VD in this population (Holick, 2006). Whether the low levels of VD have led to our findings of low PCS and MCS scores is not very clear from this data. Linear regression analysis was carried out, but still, we were unable to show any association between VD levels and QoL indicators (PCS and MCS), which is possibly due to the small sample size used for the study. Interestingly, however, subjects with normal VD levels demonstrated a higher mean of PCS score but not MCS score. Although not affirmative, such finding lends weight to the possibility of association.
Perhaps, the small number of subjects with normal VD levels (5 subjects) have masked, otherwise plausible associations. We also cannot rule out other underlying confounders which may have been out of control. It would be logical therefore, to undertake a further interventional follow up study on the same subjects, after receiving VD supplementation, to investigate whether the changes in VD levels would improve their PCS and MCS scores significantly. We intend to follow up with this line of research and perhaps increase the sample size in the near future. In summary, although we have shown a significant higher PCS scores among subjects with normal VD levels, we were unable to present solid evidence of the impact of VD deficiency on quality of life of the sample patients. Our finding is consistent with evidence elsewhere. For example a recent systematic review of 15 research articles showed that VD supplementation was not associated with significant changes in quality of life (Li et al., 2004).
The review also showed that studies that reported changes in quality of life as a result of vitamin D supplementation were in clinical populations on short-term vitamin D. Most articles reviewed displayed poor methodological quality (e.g. no randomization/blinding, dropout description, or vitamin D assessment) (Mithal and Kaur, 2012; Muhairi et al., 2013).  In conclusion the current evidence indicates that vitamin D supplementation alone may have little impact on the quality of life when used on a short-term basis in patients’ populations. It is thus clear that the evidence for the beneficial effect of a long-term vitamin D treatment supplementation on quality of life of patients remains lacking. Our data has many limitations. First, the sample size is small and convenient and as such, may have masked true statistical associations, thus limiting our ability to make adequate inference. Second, the Sf-36 instrument was meant to identify changes in QoL as opposed to a single baseline records.

Vitamin D deficiency was overwhelmingly high among the study subjects across age and sex. The PCS and MCS QoL scores were also found lower than the average levels. However, we found no association between VD levels and QoL, presumably due to our small sample size and the presence of confounders. Further studies are needed to identify the impact of VD levels on perceived QoL among patients in the Arabian Gulf countries.