Environmental faecal contamination is the defecation on the ground or failure to dispose faeces into the latrine; it could be because of lack of latrines or even a deliberate shunning of latrines. This contamination is a worldwide problem that is perhaps exercabating parasitic neglected tropical diseases (NTDs).The vice enables the lifecycle of parasitic zoonoses like taeniasis which is associated with neuro-cysticercosis (NCC) in the pig raising communities where primitive methods of free ranging are used. This cross-sectional study was made to assess the estimated human faecal density as an indicator of poor sanitation and latrine coverage in Soroti district of Uganda. Approximated transects of varying areas were made in which global positioning system (GPS) coordinates of faecal heaps along walk ways were recorded. Latrines and faeces that were observed in the selected homesteads of the approximated transects were also recorded. Faeces were seen around houses and latrines; the latrine coverage was 46% which is far below 90% required to achieve good sanitation; however observing large faecal heaps near latrines indicated possible deliberate shunning of latrines even where latrines were available. Some faeces possibly end up in the water sources if not eaten by the scavenging pigs making the communities vulnerable to many diseases. If latrine coverage is not campaigned with a per capita approach and applied just as latrine per homestead then it still remains ineffective against poor sanitation. In places were primitive habits of eluding latrines are still practiced; just having a good latrine coverage is not enough to guarantee good sanitation. There is need for a realistic sensitization and demystification about all faeces.

Environmental human fecal contamination is thought to be a result of deliberate or desperation of not using latrines, this may be due to negligence or taboos obstructing particular people from using latrines. Fecal environmental contamination is a worldwide problem in both rural and urban areas which causes public inconveniences and illnesses (Mclaughlin et al., 2007). Faecal contamination of the environment can also  be  a result of flow of latrine/toilet sludge during flooding seasons and when latrines are erected in wetlands. Poor sanitation in swine keeping areas is associated with porcine cysticercosis (Gonzalez et al., 2005). Environmental faecal contamination predisposes the human         population        to the consumption of T. solium eggs in food and water. The infected individuals become carriers and sources of infection by oral-faecal contamination (Antoninks et al., 1999). Poor sanitary conditions such as deficiency of latrines and raising pigs by free ranging methods increase the prevalence of swine cysticercosis. Flowing of sewerage sludge from leaking latrine/toilets are some of the factors that increase swine chances of accessing human faeces. Pigs are not provided with any feeds or are fed on scanty rations and then left to fend for themselves through scavenging. The frequency in which pigs were seen consuming human faeces was slightly different among age groups; it also depended on hierarchical order with the most dominant taking more faeces than the rest (Gonzalez et al., 2005).

The methods of pig keeping in Soroti were not clearly known; however, in case of any human faeces along road sides and in bushes surrounding homesteads roaming pigs could inevitably eat it. The unknown levels of environmental faecal contamination in conjunction with swine roaming might be escalating into taeniasis which is bound to significantly affect the productivity and grade of life of the members of the community by predisposing them to neurocysticercosis (NCC), epilepsy, hepatitis and psychiatric complications. The enterococci which are passed out in faeces are opportunistic pathogens which are responsible for millions of human and animal infections annually (Mululeedhara et al., 2012).

Soroti district is between latitudes (1°15N and 2°00N) and longitudes (33°00E and 33°45E). Soroti district headquarters are at 01°46N, 33°39E (Latitude: 01°7711 and Longitude: 33°6555). The district has a total surface area of 2262.6 km2 and a land area of 2256.5 km2 with 70500 households with a population of 367600 (UBOS, 2006). Despite various efforts by NGOs and government to sensitize about having latrines, many people have not listened or the communication has been misunderstood. The influx of North Eastern sometimes overwhelms the sanitation facilities in Soroti district. Environmental sanitation is one of the millennium development goals (MDG) and environmental faecal contamination can spread not only taeniasis but a multitude of other water borne infections.

With increase  in  human  population,  treatment   and disposal of human waste is increasing, since human faeces are the main source of diarrheal infections (Quinlan and James, 2009). Making latrines is a simple technology that can be used to control diarrheoa and related cases, but latrine coverage has to reach 90% of a population to have an impact on the community health (McConville, 2003). Some people do not respond to latrine construction and use because of what they call high costs of construction, lack of space and the difficulties of maintaining (McConville, 2003). In many places, children’s faeces are considered harmless and therefore not disposed in latrines.

A cross-sectional study was done in 2011 to determine the extent of environmental faecal density in the various selected areas by counting and mapping of faecal matter deposits and latrines in selected areas. This was done along paths or any roads and in some homesteads in the selected areas. Though the mapping of faeces along the paths and roads was continuous in the approximated transects; the visiting of homesteads for mapping latrines and faeces was discontinuous. A homestead after every five was selected in urban areas, while only two homesteads were skipped in rural areas because rural areas were more sparsely populated. The coordinates of the faeces and latrines were read from a universal transverse Mercator- global positioning system (UTM-GPS) device after reaching them physically and examining for the case of latrines.

A total of 83 homesteads were sampled in 25 approximated transects that were assumed in the various parts of Soroti district. The coordinates of faeces and latrines in the various selected areas of the study area are summarized as shown in Table 1. 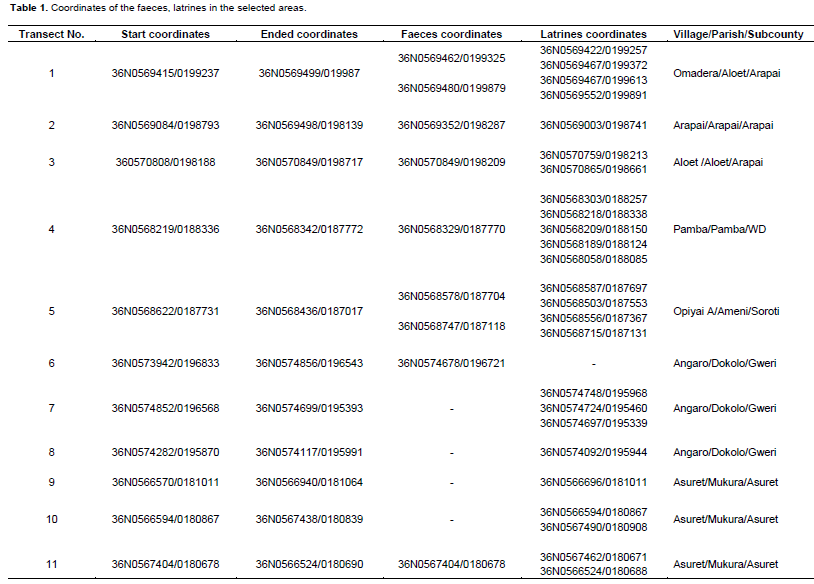 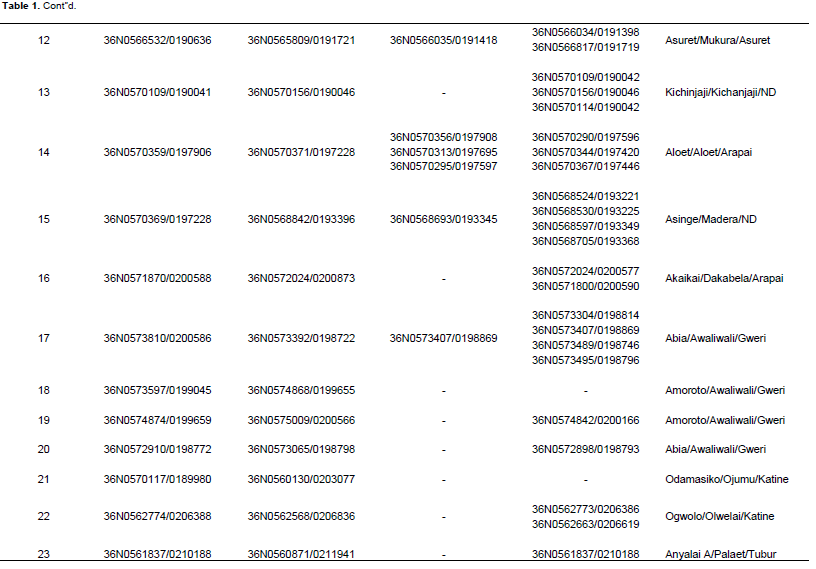 Faeces were found in the homesteads even near latrines; however, the general latrine coverage was 46% (Table 2 and Figure 1), and lack of latrines was more common with rural homesteads. There were unknown reasons for not disposing children’s faeces in the latrine. Many households were usually clustered in a single homestead and sharing a single latrine; however, the demography was not captured. most contaminated with human faeces. 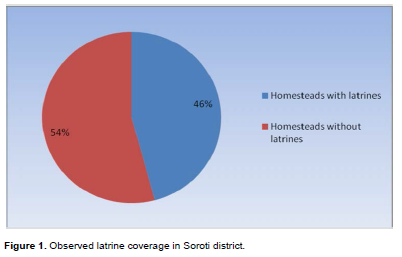 Areas had varying results possibly because of different people of various lifestyles regarding latrine use and general sanitation.  Commensurate latrines or the people were not interested in latrine use. Areas in peri-urban and urban areas they had latrines, but there was faecal littering possibly because on latrine per capita basis, the latrines were not enough.

The observed latrine coverage of 46% (Table 2 and Figure 1) was very low and indicates that there were many people defecating on the open grounds, yet some latrines still lacked walls and roofs and could only be used at night. For good sanitation, latrine coverage should reach the minimum of 90% (McConville, 2003). However, for effective sanitation, latrine coverage per se still remains implausible unless per capita latrine coverage is considered because of the varying population densities. Although the urban and peri-urban areas had more latrines per square kilometer, they were not proportional to the population densities and this could have led to faecal littering. In some cases latrines existed but people opted to defecate not in the latrine but around, because of unknown reasons possibly because of negative myths or the rooms were too small for some people to fit in. Therefore, even with recommended latrine coverage, it is possible for scavenging pigs to be vulnerable to cysticercosis.

Disposal of children’s faeces into latrines

Across Uganda many cultures discourage throwing children’s faeces into the latrine and instead just throw in bushes or dump on dust bins if any attempts to dispose are made at all. The findings made us to presuppose a tendency to assume children’s faeces not as unsafe as for adults and this makes faeces to enter the food or water cycle. Hepatitis A and amoebiasis is said to be spread by fecal contamination of food or water (Cuthbert, 2001; Fiore, 2004); no wonder the diseases are prevalent in Soroti district, although the levels are not known. Most children’s faeces and other undisposed faeces are possibly eaten by scavenging swine or could end up in the community water bodies (McQuaig et al., 2006; Fawell and Nieuwenhuijsen, 2003). Environmental fecal littering can lead to contamination of even underground water sources with human enteric viruses (Gibson et al., 2011; Touron et al., 2007; Sinton et al., 1998; Ottoson and Stenstrom, 2003). More study is needed to estimate the prevalence of all diseases related to sanitation in Soroti district.

In the rural Soroti, the households were traditionally

crowded in one homestead having distant neighborhoods with insufficient or zero latrine facilities (Table 2). The sparse distribution of the human population in the rural areas makes people too lax to construct latrines. Markets places have underestimated the requirement for the latrine facilities and their charges are perceived as expensive while others have no latrine facility at all. Travelers are accustomed to stopping on the roadsides for helping themselves and no public toilets have been constructed on the roadsides with resultant faeces littered all over the environment. Other factors identified as major reasons for human faecal littering include the rampant alcoholism as drunkards are usually careless or incapable of reaching the latrines; also upcoming kindergarten school facilities in the villages without Latrines.

The general latrine coverage was far lower than that required to control disease and there-fore the communities are either having subclinical diseases or are at risk of the various diseases of poor sanitation that just having latrines per se can affect sanitation or the prevalence of porcine cysticercosis unless the habit of latrine use is adopted. There is still deliberate ignoring of latrines by adults and not disposing children’s faeces into latrines. A holistic sensitization is needed not only in Soroti but in most communities of Uganda about sanitation; otherwise the masses are at a great risk of preventable diseases. Poor sanitation exacerbates parasitic zoonoses where swine and ruminants are intermediate hosts.

The authors have no conflicts of interest to declare.