Sierra Leone is a basis for developing a community based Early Childhood Development (ECD) programme. Using a set of questions in a household survey, it was found that 92% of children are given breast milk as their first food. However, for 39% of children, breastfeeding stops after 40 days.  46% of the children were not breastfed exclusively until six months. 28% of the children did not get three meals per day, and 13% of the mothers reported that the child had insufficient food. Only 86% of mothers had a positive assessment of the quality of food they give to their child. Low degree of diversity in the diet was observed for 38% of children who consume less than 3 types of food. Children whose diet is undiversified represent the majority of those who do not eat fruits and vegetables or protein. Sierra Leone needs to implement a parental feeding counselling programme to improve quality of feeding practices for children. This would reduce stunting and other poor nutritional outcomes.

Good parenting skills, which can be reinforced through early child development (ECD) leads to school readiness and other good health, education and child protection practices (Heckman, 2013). The philosophy of ECD programmes is to support the parents in child rearing, reinforce good practices and provide new knowledge so that they can improve other practices (Horton, 2013). Helping parents promote their children's development should also improve their self-esteem and general competence as parents. Kuchenbecker et al. (2017) showed that caregiver education improved dietary diversity even in food insecure situations in rural Malawi.  In order to design effective ECD programmes, it is therefore essential that good child rearing practices in the local communities are identified and included in the curriculum and built upon. It is also necessary to understand parents' knowledge and attitudes concerning child development. Karla et al. (2017), in a thematic analysis of caregiver narratives, concluded that in African settings, there are different cultural factors that affect feeding practices. In Sierra Leone, there is limited data and information on cultural and traditional child rearing practices. The objective of this study was to document current parental practices of child feeding in Sierra Leone. The results were to be used as an evidence base on which to develop an Early Childhood Development (ECD) policy and strategies going into the future to reduce poor nutritional outcomes in children between 6 months and 6 years.

Sampling
All the districts in Sierra Leone were divided into two strata (urban and rural). Households were selected using a two-stage cluster sampling methodology. The first stage was selecting a predetermined number of Enumeration Areas (EAs) in each strata and the second stage was selecting households in the selected EAs. A sample of 1,500 households was selected based on similar studies conducted in the West Africa region (Seurat, Per. Comm., 2013). Mothers or care givers of over 2,000 children (Table 10) of between 6 months and 72 months were selected to be interviewed from the 1,500 households. If a mother/care giver had two children of 6 to 72 months, one child was selected using a Kishi selection table of random numbers. If a mother/caregiver had more than two children of 6 to 72 months, a maximum of two children were selected on condition that one is less than 36 months and the other of more than 36 months.
Data collection
Data was collected as part of a larger study using a standardized and pre-coded questionnaires. The survey questionnaire had three parts. Relevant to this paper are survey questions on characteristics of the household, the mother and each interviewed child from 6 to 72 months and survey questions related to child feeding practices. Data related to the food eaten by the child during the day preceding the survey was collected. For breakfast, lunch and dinner meals, the survey documents, a list comprising: (i) rice or cereal, (ii) bread, (iii) milk or milk products, (iv) meat, (v) fish or eggs, (vi) tubers, (vii) other vegetables, (viii) fruit, (ix) beverages (other than water), and (x) other foods. For each of the three main meals, mothers had the opportunity to mention four food items. Thus, information was used firstly to describe the food items that have been consumed during meals, secondly to identify the variety of food items in the meal, and thirdly to identify children who did not have proteins during the day or fruits at any of the three meals of the day. The daily diet of young children is considered as diversified if it includes foods from at least four different food groups (WHO, 2002; 2010). In this study, sources of protein are considered to be milk, milk products, fish, and eggs. In the analysis, meat has been separately analysed as it is a major source of protein in the study population.
Data analysis
Quantitative data was analysed using SPSS. Qualitative data from opened ended questions was analysed through categorisation on emerging themes. Tables were generated for all the areas in the three parts of the questionnaire. This paper focused only on practices related to feeding practices.
Limitations
The study questions were translated from English to local languages (such as Krio and others depending on district) and translated back into English. This could lead variations which may affect the results. Parental practices discuss issues which may be culturally embarrassing. This may lead to under reporting of socially unacceptable behaviours and over reporting of socially acceptable behaviours. The results could also be affected by recall bias. Data collection did not include anthropometric measurements. This limits the depth of the conclusions that can be drawn.
Ethical clearance
The study was cleared by a national multi-sectoral Early Childhood Development Committee in Sierra Leone.

Breastfeeding
The majority of the children in the sample received their very first feeding from their mother as breast milk (Figure 1). Only 56.6% of the children were exclusively breastfed up to six months. 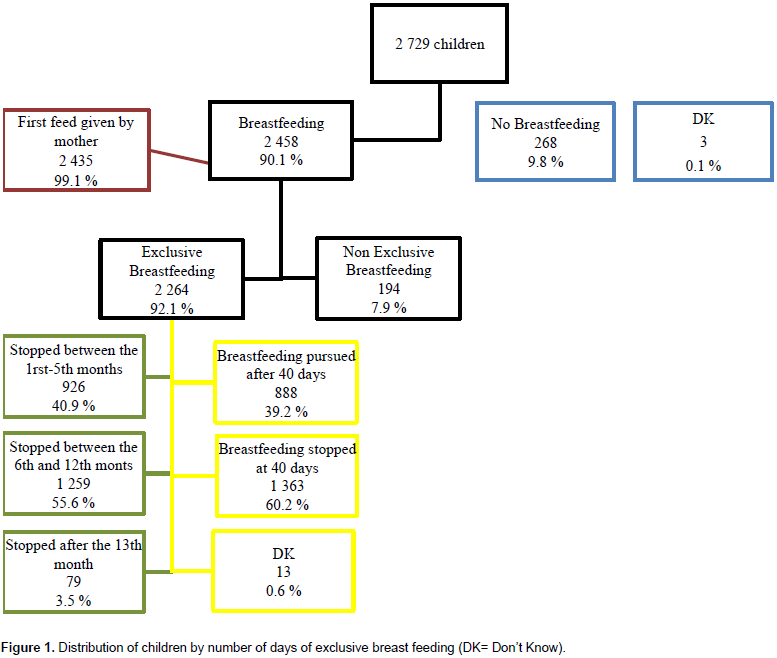 Suckling
Among the 2,450 children aged 6 months to 6 years of age who were breastfed for whom information is available, only 31.8% still suckled on the day of the survey. The majority of them are less than 15 months old and suckle one to ten times a day. Among the 68.2% of children who are no longer breastfed, three quarters stopped suckling when they were between 13 and 24 months old (Table 1).

Diversity of meals fed to children
From Table 7, 63.7% of children had a diversified diet, with foods from at least four different groups. A large number of children (13.0%) consume only one or two types of food in a day. Children whose diet is already little diversified represent 75.0% who consume no fruits and vegetables, while 69.7% of them do not consume protein and 40.2% of those do not eat meat. 44.6% (1,213 of the 2,722 children in the sample) did not eat proteins the day before the survey. If meat is removed from the group of protein items, 93.1% of the children will be considered as not having consumed it. Consumption of fruits and vegetables is higher (1,814 children who have eaten it out of the 2,722 in the sample), but it is also observed that nearly a third of them (31.2%) do not consume them (Table 7). 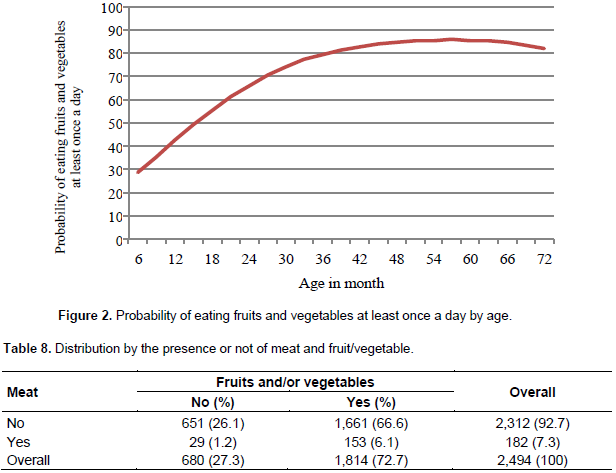 Over half of mothers (53%) said they scarcely or never have a problem in finding food (45% said they never faced it) (Table 9). However, 53% of families living in rural areas are more often or at times have difficulty in getting food, as against 32% in urban homes. 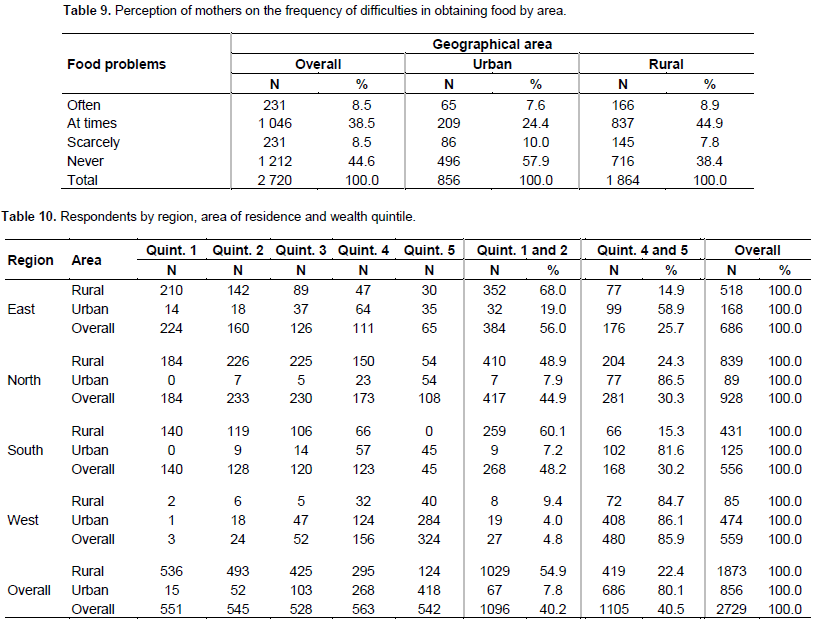 Breast feeding
Exclusive breastfeeding for the first six months of a child’s life could  save 12 to 20% of child deaths (Government of Sierra Leone, 2014). Hence, awareness must be increased in communities, inclusive of women and men, on the importance of breast feeding. In addition, lower than expected numbers of children suckled the day before the survey. This calls for parental education to increase appropriate feeding practices. Similarly, the large favourability of bottle feeding calls for increased parental education. Bottle-feeding has been known to increase diarrhoea diseases where it is inappropriately used, leading to poor nutritional outcomes. Appropriate bottle feeding counselling should therefore be targeted to mothers in Sierra Leone.
Child feeding
Children are at least expected to have 3 meals a days. This calls for further analysis to determine why children are given at least 3 meals a day. Income level of the family but also the geographical location (urban/ rural) affects adequacy of food provided to children of 6 months to 6 years in Sierra Leone. This may be related to poverty levels in the country. Appropriate social protection interventions may need to be designed to address this serious anomaly.
: :
Parental feeding support: Support with eating
At 18 months, a large number of children are not being assisted with feeding. This large number needs further examination as it may mean that children that need assistance with feeding are being left alone, leading to inadequate feeding.
Diversity of food/meals
The daily diet of young children is considered as
diversified if it includes foods from at least four different food groups (WHO, 1990). Based on this definition, alot of children in the study do not have a diversified diet. Consumption of non-diversified meals and consumption of meals with no meat, fruits and/or vegetables may be a cause for poor nutritional outcomes in children in Sierra Leone. Parents  need support to diversify food for children.
Difficulties with accessing food
Only slightly over half of mothers had no difficulties in accessing food. This is quite a low figure if the child related nutritional problems in Sierra Leone are to be addressed. The scenario is worse in rural areas. This calls for appropriate nutritional, social protection or other government interventions to increase access of food for mothers with children between 6 months and 6 years, especially in rural areas where  a majority of the population reside.

Poor nutrition outcomes in Sierra Leone may be related to poor parental feed practices. Parental practices related to breast feeding, child support and feeding support have been found to be sub optimal in this study. In particular, there is need for attention to breast feeding practices, child feed, caregiver feeding support, dietary diversity and access to food. Mothers of children 6 months to 6 years have also problems with accessing food in general and diversified foods, such as meat, fruits and vegetables in particular. Nutrition outcomes in Sierra Leone would be improved by developing a comprehensive community based early childhood development programme to improve feeding related parental practices. Mekonnen et al. (2017) have recommended similar interventions for populations with suboptimal feeding practices in Ethiopia. Future studies in this area should collect data on dietary intake, disaggregated by age. In addition, future research of this type should collect anthropometric data to triangulate findings from caregiver practices data. This will enable further assessment of food and dietary intake by age as recommended by WHO. The effects of feeding practices could also be better understood if future studies could collect anthropometric data at the same time that mothers/caregivers practices are being studied.