Delivery at home and associated factors among women in child bearing age, who gave birth in the preceding two years in Zala Woreda, southern Ethiopia

A key intervention to achieve the goal of maternal mortality reduction in deliveries that occur at home is significant. In Ethiopia, the MMR has reduced from 676/100,000 live births in 2011 to 420/100,000 live births in 2013 with a skilled attendant of 23%, whereas 77% deliveries occurred at home without proper medical attention and care during childbirth. Little is known about cultural factors that contribute to home delivery. Therefore, this study aimed to explore the cultural factors and other factors in detail that previous studies did not address in detail and assess prevalence of home delivery and associated factors among child bearing age women who gave birth in the preceding two years in Zala Woreda, Southern Ethiopia. A community based cross sectional study that triangulates quantitative with qualitative approaches was conducted from March 15 to April 10, 2015. Multistage sampling through simple random technique was employed to select 447 study participants. Bivariate and multivariable analyses were carried out to identify factors associated with home delivery. Qualitative data was analyzed thematically and results were triangulated with the quantitative data. Associations were determined by using OR at 95% CI and p≤0.05. The prevalence of home delivery is found to be 67.6%. The factors that significantly affected home delivery in this study were place of residence   (AOR: 5, 95% CI: 2.2, 12), women age at interview  (AOR: 2.78, 95% CI: 1.2, 6.5), women’s education  (AOR: 5.8, 95% CI: 2.86, 11.8), antenatal care  (AOR: 3, 95% CI: 1.3, 8.5), time to reach the nearest health facility (AOR = 4.5, 95% CI = 2.2, 9), family size ( AOR= 3.9, 95% CI=2,16.77) and attitude of the mother to maternal services (AOR=3.7 95% CI= 2.2, 6). Home delivery is highest in the study area. The most important factors that determine home delivery appear to be women’s education status, number of ANC visits, time to reach the nearest health facility and age and attitude of the women towards home delivery. Actions targeting maternal education, encouraging number of ANC visits, making health facilities in accessible distance and conducting behavioral change communication were the crucial areas to tackle in giving birth at home.

The vast majority of women who deliver outside the health facilities give birth at home, where risks of mortality are on the increase in the absence of professional attendance. It has been estimated that  only  50%  of  the women in the world have access to such skilled care in developing countries, however, still most women deliver at home (WHO, 2013; Folashade et al., 2013). Worldwide, an estimated 529,000 maternal and nearly 4 million neonatal deaths (during the first 4 weeks of life) occur annually, 75% of neonatal death is in the first week of life. Approximately, 99% of these deaths are in low and middle income countries, where 43% of births are attended by TBAs, the proportion generally being higher in rural areas (WHO, 2013). These home deliveries conducted by TBAs may be responsible for an increased risk of maternal and perinatal mortality as the TBAs have low educational status and sometimes were not trained in preventing or recognizing complications and promptly referring the patient to an appropriate facility for emergency obstetric care (WHO, 2013; Folashade et al., 2013). In addition, nearly 4 million stillbirths occur annually, and most of them are close to the time of delivery (WHO, UNFPA, WB, 2009). Of the neonatal deaths, nearly 50% occur among children delivered at home. Perinatal mortality (stillbirths and neonatal deaths) is often related to intrapartum complications, and is, thus, higher in countries where highest deliveries are conducted at home environment. It has been estimated that decreasing the proportion of deliveries conducted at home reduces perinatal and maternal deaths by nearly half (WHO, 2013; Folashade et al., 2013, WHO et al., 2009; Sychareun et al., 2009). The five major pregnancy-related complications leading to maternal mortality globally are postpartum hemorrhage (25%), puerperal infections (15%), unsafe abortion (13%), hypertensive disorders of pregnancy (12%) and obstructed labor (8%). About 35% of women in developing countries receive no antenatal care during pregnancy; and 70% receive no postpartum care. In these countries, home deliveries are over 60% taking place largely in rural areas with unskilled attendants (WHO et al., 2008; Mwanakulya et al., 2008). According to study in Malaysia (2009), more than 90% of births occur at home with unhygienic conditions and without assistance of trained birth personnel (Sychareun et al., 2009). In Ethiopia, in 2000/2001, 871 maternal mortality per 100,000 were recorded as the highest rates of maternal mortality in Africa, and then reduced to 676 maternal mortality per 100,000 births in 2010/2011. Ethiopia was one of the six countries which accounted for more than 50% of all maternal deaths in 2012. The proportion of deaths due to postpartum hemorrhage (PPH) that occurred is most likely due to the fact that over 90% of births take place at home, and women with PPH may not arrive at a health facility on time (EDHS,2011). In Ethiopia, the proportion of births attended by skilled personnel in health institution has increased in a very slow fashion from 2005 to  2011.  The majority of Ethiopian women give birth at home without skilled attendants. Further, as reported in 2011, Ethiopia Demographic and Health Survey (EDHS), the 90% of births at home take place in unhygienic conditions and associated with adverse infant and maternal outcomes. There is no significant difference in proportions of home delivery between EDHS in 2005 and 2011 (Sibley et al., 2009; Central Statistical Agency [Ethiopia] and ICF International, 2012; Mwanakulya, 2008; Ethiopia MDG Report, 2013; Pakistan Demographic and Health Survey, 2006-07). The rate of home delivery in Ethiopia is in the highest bound by sub-Saharan Africa standard (Central Statistical Agency [Ethiopia], ICF International, 2012; Pakistan Demographic and Health Survey, 2006-07). According to health and health related indicators’ report, Skilled Birth Attendant (SBA) of Ethiopia was 23% (EFMOH, 2013) and the achievement of Southern Nation Nationalities peoples Region (SNNPR) was 20.6% (EFMOH, Health and Health related indicators, Oct. 2014). In Ethiopia, according to the latest estimate of United Nations, the MMR has declined from 676/100,000 live births in 2011 to 420/100,000 live births in 2013 (UNDP, 2014). Based on 2013 annual review report of the Gamo-Gofa zone health department, despite efforts exerted to reduce giving birth at home, the institutional delivery achievement of Gammo Gofa Zone and Zala Woreda is 22 and 9%, respectively. Home delivery at Gammo Gofa Zone and Zala woreda accounted for more than 80 and 90% respectively (Gamo-Gofa zone, July 2013).
Many studies dictated the socio demographic, socioeconomic and obstetric factors of home delivery. But cultural and traditional factors were not addressed in detail. Therefore, the purpose of this study was to assess prevalence of home delivery and associated factors among women in child bearing age, who gave birth in the preceding two years. This study will be helpful for the relevant stakeholders in the planning and implementation of intervention activities to improve the delivery service utilization through significant reduction of giving birth at home.

Study design and study area
Acommunity based cross-sectional study was conducted in Zala Woreda, Southern Ethiopia from March 15 to April 10, 2015. The study was triangulated with qualitative survey through focus group discussions (FGDs). Zala woreda, which is located 485 km South of Addis Ababa and 278 km from Hawassa, the capital city of Ethiopia and SNNPR respectively. Zala is one of the woredas (districts or third   level   administrative   division)   in   the   Southern    Nations, Nationalities and Peoples' Region of Ethiopia, part of the Gamo Gofa Zone. Zala woreda is bordered on the Southwest by Uba Debretsehay woreda, on the Northwest by Demba Gofa woreda, on the Northeast by Kutcha woreda, on the east by Deramalo woreda and on the Southeast by Kemba woreda. The woreda is divided into 35 kebeles [lowest administrative unit]. It has 34 rural and 1 urban kebeles. The woreda had a population of 74,369 of whom 37,576 are men and 36,793 women (CSA, 2007). The total population is projected to be 91,107 and women of child bearing age is 20,954. (Zala Woreda, 2015). Concerning health facilities distribution, the woreda has 34 health posts, 5 government health centers, 8 private clinics and 1 rural drug vender (Zala Woreda, July, 2013).
Source population
All women in child bearing age (15-49 year) who gave birth in the preceding two years (from March 10, 2013 to April 10, 2015) in Zala Woreda, Southern Ethiopia.
Study population
All women in child bearing age who had given birth at least one birth in the preceding two years prior to data collection in ten selected kebeles of the Woreda.
Inclusion criteria
All women who delivered in the preceding two years regardless of pregnancy outcome and marital status, those who gave birth by the help of traditional birth attendants (trained or not) were included under home delivery. Permanent resident (those who lived at least 6 month and gave birth in the area) as well a mother that had more than one births in the preceding two years, the last birth was included in the study.
Exclusion criteria
Home deliveries with skilled birth attendances, delivery by health extension workers, respondents of FGDs for quantitative survey and women who are mentally not capable of being interviewed.
Sample size and sampling procedure determination
Sample size determination with first objective calculation for the first objective was done based on the following single population proportion formula: 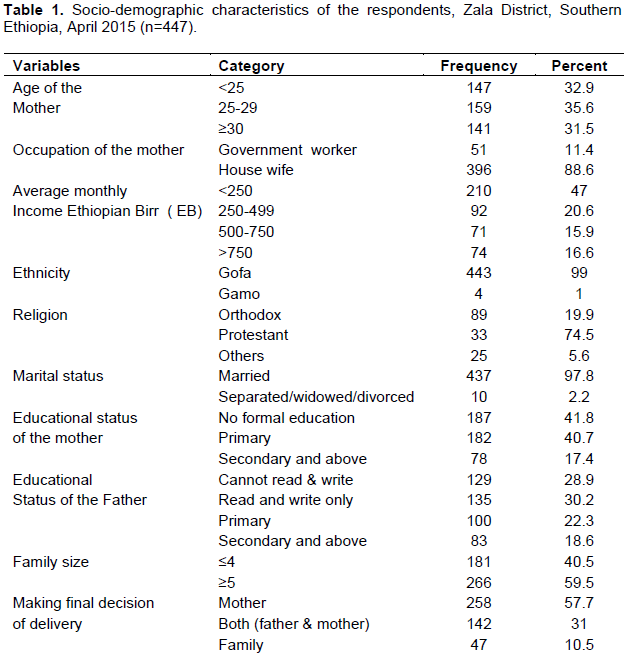 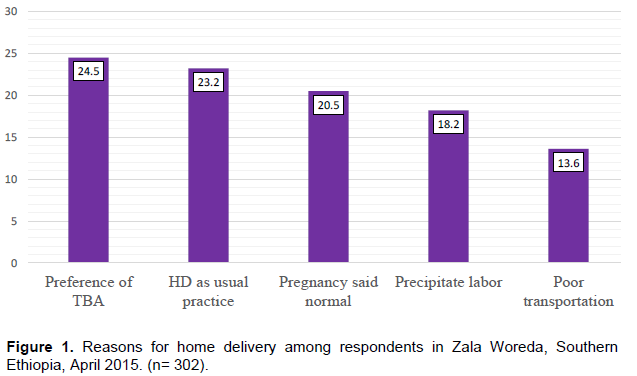 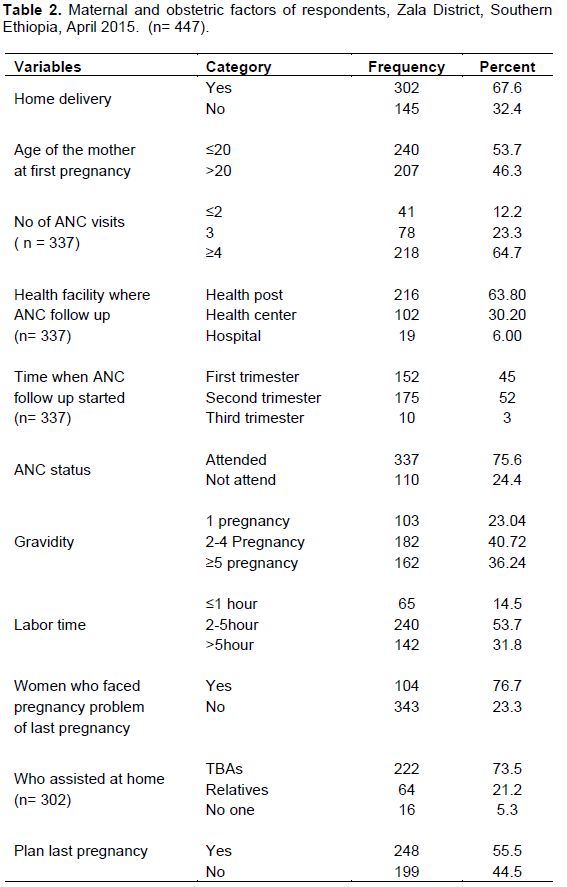 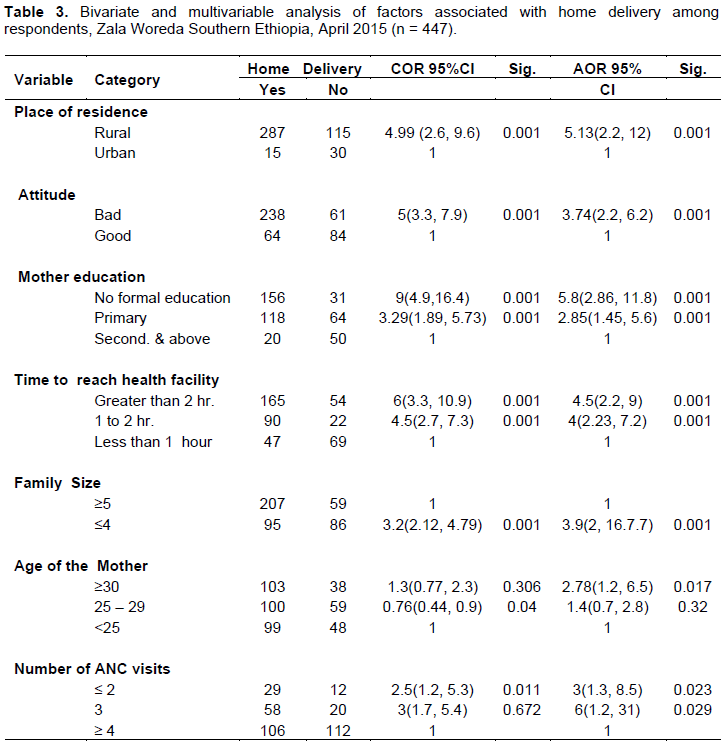 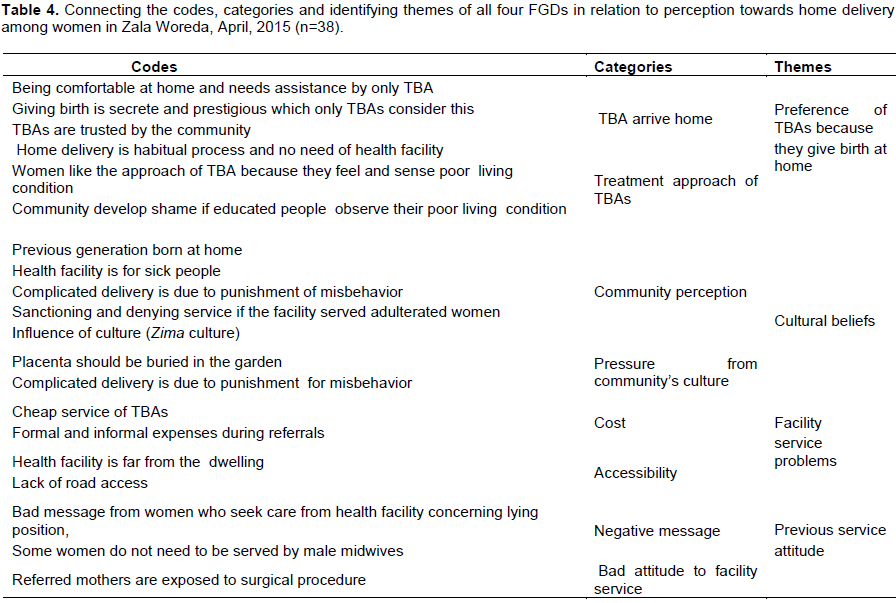 This study revealed that the prevalence of home delivery among women of child bearing age who gave birth in the preceding two years prior to data collection seemed to be higher. Factors that were significantly associated with home delivery include place of residence, age of the mother, the average walking time to reach the nearby health facility, number of ANC visits and family size.
Socio-cultural factors such as attitude of the mother to maternal service utilization was also found to be a significant predictor of home delivery.

The authors declare that they have no conflict of interests.