Breast cancer is the most common and steeply rising cancer among women in Bangladesh. This qualitative observational study is done to assess the psychosocial sufferings of breast cancer patients. The purpose of the study is to evaluate eradication of social obstacles and to amend the overall level of distress and stigma associated with breast cancer. The observational prospective study was conducted on 240 patients aged 30 to 70 years at Combined Military Hospital, Dhaka, Bangladesh from January 2014 to July 2017. The study was measured on breast cancer awareness and psychosocial support for breast cancer patients. In this study, the educational status of the most participants 126 (53%) was up to primary level. Maximum participants (91%) had strong misconception on breast cancer and they lead life with social disgrace. One hundred and forty seven (61%) members have poor, eighty (33%) members have average and the remaining thirteen (6%) have good awareness about breast cancer. Three fourth (75%) of the patients face negligence from community where few feels suicidal and became victim of psychosocial torture from close ones. The last section consists of family member’s view where most of them (93%) provide support to the patient. In contrary, two third (67%) of the family members do not give psychological support to the patient. The study suggested lack of familial and social consciousness and embarrassment of the cancer patients are the main obstacles to improve the quality of life. To overcome these challenges, emphasis should be on personal and public health education and psychosocial supports, as well as providing counseling, awareness and spiritual support by the caregivers and family members.

Breast cancer is the most frequently diagnosed cancer and leading cause of cancer related death in females’ worldwide, accounting for 23% of all cases of cancer and 14% of total cancer death (Jemal et al., 2011). The treatment of breast cancer includes surgery, chemotherapy, and radiotherapy or hormone therapy and might cause serious physical and psychological consequences that vary according to the type of treatment.

The diagnosis of any cancer causes fear and is often seen as death sentence. Breast cancer patients experience great stress during the course of treatment. Fear, worry, anxiety, tension, depression, anger, hopelessness, helplessness, uncertainty for the future, and body image is all common responses (Nelson, 1996; Van den Beuken et al., 2008; Carver et al., 1998). To some extent, this is because many people think that cancer is contagious when in fact it is not. Women receiving chemotherapy have higher anxiety scores and higher anxiety at the start of treatment is associated with decreased quality of life (Schreier and Williams, 2004). Some studies suggest that younger women, who represent about 1 out of 4 breast cancer survivors, tend to have more problems adjusting to the stresses of breast cancer and its treatment. They may have trouble with emotional and social functioning (Bordeleau et al., 2003).

Cancer symptoms or body parts affected by the disease can cultivate stigma. Stigma is a negative attitude to a person with a mental disorder can lead to negative discrimination Cancer related myths and stigma are important problems that must be addressed (Carver et al., 1998).

A study reveals that in the myths and conceptions about cancer, findings from Jordan, being patients with cancer in Jordan can be stigma provoking and is associated with many misconceptions. Socio-demographic characteristics and cultural beliefs crossed lines with the participants (Keush et al., 2006; Suwankhong and Liamputtong, 2016). Patients are often reluctant to undergo surgery because they believe, if you cut into the cancer, it will spread immediately all over the body. The aim of the study is to assess behavioral and psychosocial aspect following diagnosis of cancer and to create awareness about breast cancer to be detected on early stage as well as to promote awareness on caregivers support.

This observational study was conducted on 240 women aged over 30 to 70 in breast cancer at Combined Military Hospital, Dhaka, Bangladesh from January 2014 to June 2017.

A questionnaire was composed of two parts: The first relating to general information about the interviewee, and the second with 16 structured questions. These questions considered personal aspects that could influence the quality of life of women with breast cancer, which were used as categories for the presentation and analysis of results. A separate questionnaire was also for the attendants/family member of the patients with five structured close ended question. After signing of an informed consent form, all the information was captured in excel for analysis. Data were then organized and qualitatively analyzed.

Simple random sampling method will be used for data collection. The questionnaires were distributed among rural women over 30. The questionnaire for patient which evaluated the democratic characteristics in 4 items includes age (30-40, 40-50, 50-60, 60-above), education (illiterate, primary, high school, graduate), occupation (private and house wife) and marital status (married, widowed). Out of 240 patient attendants, the data could be collected from 230 patients, as 5 of them were under aged and the rest 5 were unwilling to participate. The collected data was analyzed statistically and plotted under different dimensions (age, marital status, literacy level, awareness and level of psychosocial support). 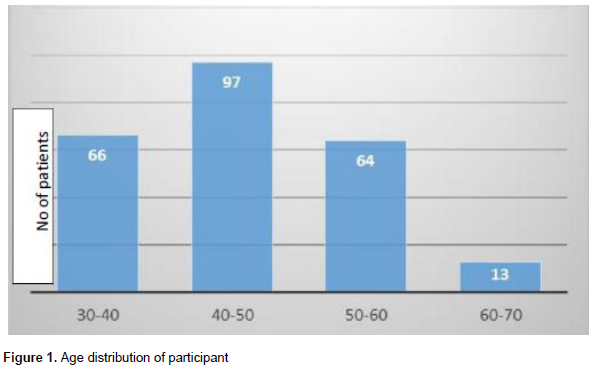 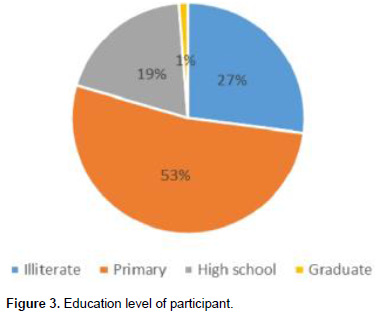 In this study it was found that 100% of  patients believe that cancer is death sentence; can never be normal and they are in depression and anxiety. 88% feel shy of the diagnosis while 86% thinks that the disease is caused by the curse of God for sin. 75% of the patient faces negligence from community while 1% feels suicidal and face physical torture from husband. 70% think that it is contagious and 84% feel that she should not be punished for her disease (Figure 4).

In family member’s  view,  93%  provides  support  to  the patient; 67% did not provide psychological support to the patient; 78% of the family members had change to warm relationship with the patients; 60% does not help the patients in daily household work while 76% feel fatigue to provide support throughout the treatment phase (Figure 5). 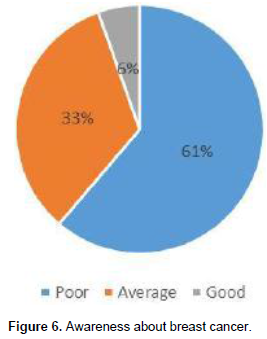 In the early decades of the century, cancer was considered a fatal disease but the medical therapy has developed significantly over the years such that most cancers can be treated and cured. Nevertheless, many misconceptions exist about breast cancer. In many cases, women were being blamed for somehow bringing it on her or felt that the community would reject them if they know that they had cancer. Some woman said their family told them that the disease was “a punishment from God”. Others complained about lack of support from their husbands after being diagnosed, and some feared abandonment. Even there are cases of very few who were physical tortured by their husbands. Family support and social support are both important protective factors for depressive patients in the general population (Kamen et al., 2011). Family members are also affected by the changes experienced by the patient and must adjust to new roles in the cancer journey (Bloom et al., 2001; Coyne and Borbasi, 2005). Maly et al. (2005) indicated that breast cancer patients with higher family support had less depressive or anxiety symptoms. It has also been reported that mental support and empathy from the spouse were related to lower depressive symptoms among elderly breast cancer survivals (Talley et al., 2010).

Chemotherapeutic treatment produces a range of relatively immediate effects, including pain, nausea, fatigue, mouth sores, depression, insomnia, and temporary hair loss. Women across cultures often  report that hair loss is one of the more troublesome; it makes them feel unattractive and look like they are sick or dying. Further, they often feel stigmatized by others (Banning et al., 2009). Factors associated with a major reduction in all domains of quality of life included the presence of metastases, having had a mastectomy as opposed to a lumpectomy and a shorter time relapsed since diagnosis.

The stigma of many diseases and disorders prevalent in the world has attracted increasing public health concern. Studies of breast cancer stigma found that stigma extensively exists in patients with breast cancer because of their physical and psychosocial stress (Torres et al., 2016). A study of 81 women with breast cancer in Nigeria showed that married African women have significant emotional, physical and social problems following primary treatment of breast cancer. Among 81 patients included in the study, 38.3% had divorced or separated 3 years after therapy compared with the national average of 2.6% (Ahmed et al., 2013).

Psychosocial trauma of cancer patients, lack of awareness, misconceptions, stigma, lack of support from family are investigated in this study. Result showed that most participants faced different types of sufferings arising from family and society due to lack of knowledge, awareness as well as prejudice.  The poor knowledge and wrong beliefs about breast cancer prevention among women are responsible for a negative perception of the curability of a cancer detected early and of the efficacy of the screening test (Karayort et al., 2009). Besides there are other problems such as minimum caregiver support, financial limitation to continue the treatment etc. Results also showed that most of the woman had very poor awareness about breast cancer. Even till this time, many people of our country from rural areas believe on different myths and stigma. Most of the women on treatment hesitate to go out to meet neighbors and relatives due to their physical changes like bald head, pale complexion. Sometimes surrounding people are reluctant to talk much with the patients thinking the disease as contagious. All these issues must be overcome in no time to ensure a peaceful environment for the breast cancer patients.

The study has some limitations that should be noted. This was a descriptive study in which the self-report questionnaire has been completed quickly with ‘yes’ or ‘no’ and frequency responses. The questionnaire included most common misconceptions stigma present in our society about breast cancer. This is an observational study about the breast cancer.

Almost a century of dealing with cancer has passed. A hundred years ago, women with breast cancer were dead women. Today, this is no longer the case. Thousands of women all over the world now have the chance to live normal life after receiving a successful treatment. Yet, breast cancer remains one of the leading causes of death among women. Even if the death rates have been declining in the past few years, women at different ages should periodically test for breast cancer because detecting the disease at a very early stage can be very helpful for a complete recovery. Bangladeshi women need to be aware about breast cancer for prevention. There is an urgent call for more effective nationwide coordinated, intensive health promotion intervention programs on risk factors, prevention, screening and management for breast cancer. Continuing medical education programs and other health care training institution should give priority on women’s health in the country. Breast cancer awareness is an attempt to increase knowledge and reduce stigma. It aims at encouraging women to be more aware of their breasts, thereby promoting earlier presentation and diagnosis. It is also urgent to address the cancer problem at national and international levels. Effective media campaigns and behavioral interventions should be disseminated to decrease the incidence of and morbidity and mortality associated with breast cancer. When facing breast cancer, people around the world want information and emotional support for themselves and their families. training should be given to husband and family members once weekly as well. Patient advocacy in international settings should be strengthen to prevent stigma from inhibiting people in their breast cancer control efforts; and to help people affected by breast cancer receive the support, services, and information they need, all of which will help in decreasing the global breast cancer burden.