Risk factors and treatment for migraine in adults in Ouagadougou: A cross-sectional survey

The aim of this study was to describe the migraine treatments implemented in Burkina Faso. It was a descriptive cross-sectional study with a prospective data collection from August to November, 2019 in Burkina Faso. The study included 653 randomly selected participants aged 16 years and over. Female gender, high socioeconomic status, coffee and alcohol consumption, high blood pressure and smoking were significantly and positively associated with migraine. The mean period from the beginning of the symptoms to the initiation of care was 25.93 months ± 42.09 with a range of 0 - 240 months (20 years). While 42 (76.36%) patients self-treated during migraine attacks, 41 (74.55%) never visited a healthcare professional for their migraine. No migraine patient had taken traditional treatment. No improvement was noted in the course of the disease in 28 (50.91%) participants. Migraine predominantly affects women in our context. Psychoactive substances such as coffee, tobacco and alcohol as well as high blood pressure also seem to be risk factors with a strong possibility of reverse causality to be elucidated by a cohort study. Migraine is a disease that responds little or no to treatment which is hardly ever substantive.

Migraine is a frequent and disabling primary headache. It presents as recurring headache attacks that can range from once (sometimes several times) a week to once a year. Migraine usually starts at puberty and mostly affects people between 35 and 45 years of age, but it  can  affect much younger people, especially children. European and American studies have shown that 6-8% of men and 15-18% of women suffer from migraine each year. The figures are comparable in Central and South America. In Puerto Rico, for example, researchers calculated that 6% of men and 17% of women suffered from migraines. A survey carried out in Turkey reported an even higher prevalence in this country: 10% in men and 22% in women. The higher rates seen everywhere in females (2-3 times higher than males) have a hormonal cause (OMS, 2004).The intensity of migraine pain ranges from moderate to severe and when severe, it becomes very debilitating, responsible for a significant functional and emotional impact leading to an impairment in quality of life (Gazerani, 2020; Sacco et al., 2020). The prevalence of migraine remains high in most epidemiological studies and its socio-economic and personal impact is significant. Globally, more than a billion people (14.7% of the global population) suffer from migraine (Vos et al., 2012)with an incidence of 17.6 per 1000 person-years (http://www.ffn-neurologie.fr/grand -public / diseases / migraine) (Rist et al., 2021). The prevalence of migraine was reported between 7.9% in France (Pradalier et al., 2004) and 25.2% in India’s Karnataka State (Steiner et al., 2016), and it peaked up to 42% in a selected sample of young-age women (Dueland et al., 2005). Prevalence of migraine disorders with monthly frequency higher than 15 days was reported between 1.2% in India’s Karnataka State and 6.1% in Brazil. Among pediatric populations, prevalence of migraine was lower, between 9.2 and 10.6% (Steiner et al., 2016). In the Global Burden of Disease Study 2010 and 2015, migraine was ranked successively as the third most common disease and the third cause of disability in the world in men and women under 50 (Leonardi and Raggi, 2019; Osumili et al., 2018). Because of this high prevalence of migraine associated with the repercussions it induces, it is classified by the World Health Organization (WHO) among the twenty diseases with the strongest societal impact, and it climbs up to the ninth place if we consider only the female population (OMS, 2004). In France, nearly 20 million working days are lost due to migraine and the health expenditure caused by this disease annually is nearly 3 billion euros (OMS, 2004).

Although apparently of lower prevalence, migraine is still common in Asia (3% of men and 10% of women) and Africa (3-7% according to community studies). In-depth studies remain to be done (OMS, 2004). In Mali in 2011, a study had shown that 63.8% of students suffering from migraine had absenteeism from 1 to 14 days with an average of 5 days over a quarter and there was a limitation of the ability to concentrate in 19.2% of migraine students (Diallo et al., 2019). Despite its significant socioeconomic impact, migraine remains poorly known, underestimated, underdiagnosed and even undertreated to the point that 80% of migraine patients do not know themselves as such. Despite the existence of well-coded diagnostic criteria, many patients who consult still suffer from delayed diagnosis, most of whom have been wrongly diagnosed with sinusitis. The studies already carried out in Burkina Faso have only targeted headaches as  a   whole  and  have  been  limited  to  specific  socio-professional groups so that their findings do not allow the development of an adequate health policy. The aim of this study was to describe the treatments implemented in our context and their effectiveness.

It was a descriptive cross-sectional study with a prospective collection of data from August 9th to November 6th, 2019 in Ouagadougou, the capital city of Burkina Faso. It included women and men aged at least 16 years, residing for at least 6 months in the city of Ouagadougou, able to answer the survey questions and having given an informed consent to participate in the study. Simple random sampling was performed. The sample size was calculated from the standard formula ? = ?????? (n = sample size (z = standard deviation; p = expected prevalence; q = 1-p; i = margin of error. Considering an expected prevalence of 3.82%, a confidence interval of 95% and a margin of error of 1.5%, the sample size was 653 individuals. We randomly selected 2 out of 12 districts in the city of Ouagadougou. We then placed ourselves at the center of each district (the town hall was taken as the center) and threw a pencil in the air. The households in the direction of the sharped end point of the pencil were investigated one by one until the required number of individuals was reached. The variables collected included i) Sociodemographic and clinical characteristics, vascular risk factors (hypertension, diabetes, sedentary, obesity, alcohol, tobacco, etc.), type of treatment (self-medication, traditional treatment, medical prescription, etc.) and results of the treatment (efficacious, moderately efficacious and non- efficacious).

The diagnosis of migraine was made according to the criteria of the International Headache Society (https://ihs-headache.org/en/resources/guidelines).

Migraine without aura is defined as recurrent attacks lasting from 4 to 72 h. Typical features of the headache are unilateral topography, pulsatile type, moderate or severe intensity, worsening with routine physical activity, and association with symptoms such as nausea and / or photophobia and phonophobia. Its diagnosis is purely clinical according to HIS 2013:

B. Headache attacks lasting 4 to 72 h (without treatment or with ineffective treatment)

C. Headache having at least two of the following four characteristics:

4. Worsened by or resulting in avoidance of routine physical activity (for example, walking or climbing stairs)

D. During the headache, at least one of the following symptoms:

1. Nausea and / or vomiting

E. Not better explained by another diagnosis of ICHD-3.

Recurrent attacks, lasting several minutes, with unilateral symptoms, totally reversible that can be visual, sensitive or other type of symptoms; which usually develop gradually and are generally followed by headache and the associated signs of migraine. HIS 2013 diagnosis criteria for migraine with aura are:

A. At least two attacks meeting criteria B and C

B. At least one fully reversible aura symptom that can be:

3. Related to the speech and / or the language

C. At least three of the following six characteristics

1. At least one aura symptom develops gradually over ≥5 min

4. At least one aura symptom is unilateral

5. At least one aura symptom is positive

6. The aura is accompanied, or followed within 60 minutes, by a headache

D. Not better explained by another diagnosis of ICHD-3.

Data were collected from households by  direct  individual  interview using a structured questionnaire. The Chi-square test was used to compare the proportions in non-ordinal categorical variable and the Mann-Whitney test for ordinal categorical variable and the t-test for quantitative variables such as age. All tests had a significance level of 0.05. The data collected was analyzed using the Epi info software, version 7.2.2.6. 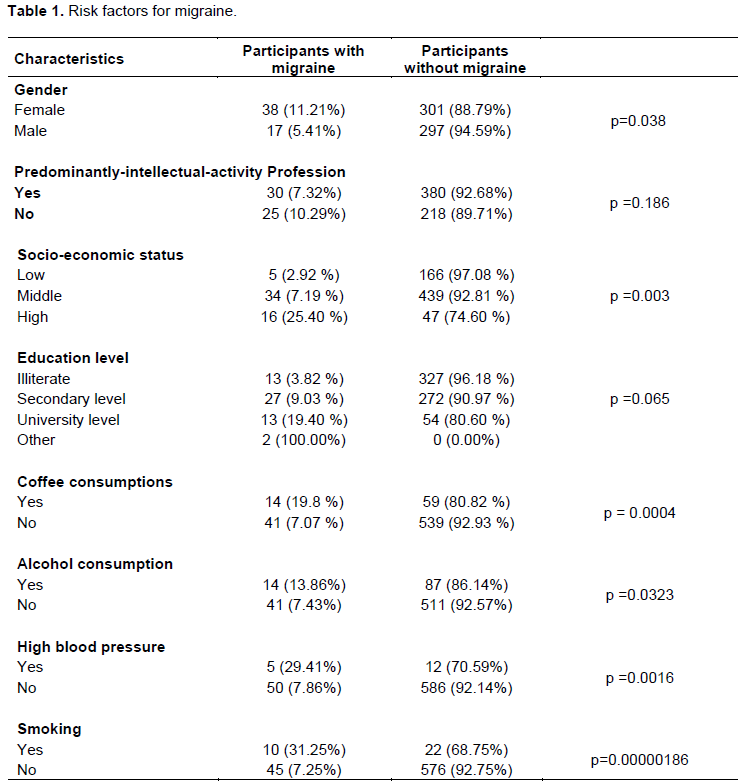 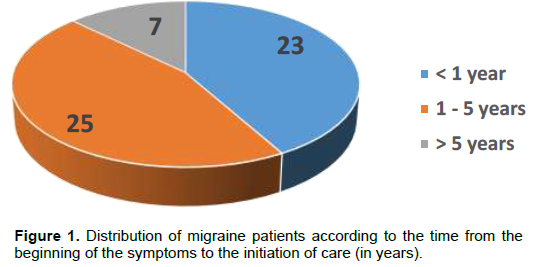 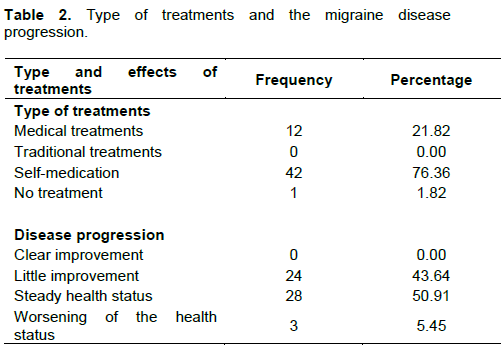 The   households’   survey   took   place  in  a   context  of security threat with its share of suspicion and mistrust of foreign people visiting households. The work was therefore more difficult and the information gathered may not be as reliable as we would expect. Moreover, the participants provided verbal response that we were not able to check for accuracy. Among the illiterate participants, the translation of the questionnaire directly into local languages might have been source of misunderstanding of the questions and source of incorrect answers. Finally we just run a bivariate analysis, displaying only crude odd ratio. Multiple small cells associated with missing data did not allow for multivariate analysis that could have addressed the confounding variables issues.

Among the 55 migraine patients, 41 people (74.55%) had never visited a health professional. A similar rate was found in Nigeria, in hospital settings with 80.4% of migraine patients having never consulted a doctor (Oshinaike et al., 2014). This low consultation rate could be explained either by the ignorance on migraine headaches perceived as being caused by the identified triggering factors or by the trivialization of the migraine attacks. In France, different results were found with 59.53% of non-consultation (Cassat, 2002). This difference could be explained by the inaccessibility of health care to the majority of the population in our context compared to France.

Also in our sample, the practice of self-medication affected more than two-thirds of the participants who were taking treatment and this was at 100% a treatment self-administered during attacks. In Congo, this practice was observed in 89.8% of migraine patients (Ossou-Nguiet et al., 2019) while it was 66.8% in Mali. Although these results are slightly different from ours, the self-medication rate remains very high in all studies and this could be explained by the low consultation rate. Among the 55 migraine patients, 28 (50.91%) saw their migraine evolve without improvement. Less than half had some improvement in their attacks frequency and severity (43.64%). This could be explained by  the lack of long-term treatment for migraine linked to the low consultation rate. This situation can also be explained by a lack of information and sensitization of the front-line health professionals who use to manage migraine by prescribing symptomatic treatments during migraine attacks without referring to neurologists.

Migraine as a disabling disease would affect predominantly women in our context. Psychoactive substances such as coffee, tobacco and alcohol as well as high blood pressure also seem to be risk factors with a strong possibility of reverse causality to be elucidated by a cohort study. It is a neglected disease both by the patient himself and by non-specialist health care professionals. Self-medication is widely preferred to specialized medical care. As a result, migraine is a disease that responds little or no to treatment which is hardly ever substantive. Professional health workers need to be sensitized and their knowledge updated in relation to this pathology in Burkina Faso.

The authors are grateful to the staff of the neurology department of the university teaching hospital Tengandogo who contributed greatly to and facilitated the data collection. They also thank the administration of the hospital who provided all permission to make possible the data collection.