Relationship of combined frequency of hypertension and diabetes mellitus to socioeconomic status: A comparative study in Anambra State of Nigeria

Frequency of diabetes mellitus is rising. In 2015 it was estimated that there were 415 million people with diabetes aged 20-79 years and 5 million deaths attributable to diabetes. Three quarters (75%) of those with diabetes were living in low- and middle-income countries. The number of people with diabetes aged 20-79 years was predicted to rise to 642 million by 2040 (Ogurtsova et al., 2017). This also suggests an SES factor in the distribution of diabetes mellitus. Life style and diet are important factors affecting the disease hence it is expected to be more frequent in high socioeconomic status than in low socioeconomic status. Danjin et al. (2016) found that diabetes mellitus was more frequent in urban dwellers than rural dwellers (Danjin et al., 2016). Shittu et al. (2017) reported that it is more prevalent among people with low income.

Hypertension and diabetes are associated with increased risk of CVD and renal disease. The risk is exacerbated when both are present (Govindarajan et al., 2006). Risk of a patient having one when the other is present is higher than when one is not present. A direct correlation between plasma insulin levels and blood pressure exists (Sechi et al., 1992; Sowers et al., 2001). There are studies on the distribution of hypertension and diabetes by socio-economic status but little has been done on the combined frequency of the diseases and socioeconomic status. The aim of this study is to compare the relationship of the combined frequency with SES.

This is a cross sectional comparative study. 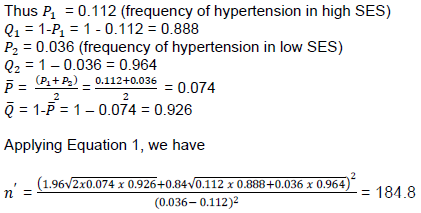 Applying Equation 2, we have

The minimum desired sample size is 210

Socioeconomic status (SES) in Nigeria depends on level of education, occupation and income. There are five categories: I, II, III, IV and V, according to Oyedeji (1985). So he summarized  the groups into two: the high made up of the first 3 groups and the low made up of the last 2 groups.  Those that belong to the high are the rich people who are politicians, professionals, university graduates with post graduate qualifications, business executives, land lords, car owners, etc. The low SES is made up of peasant farmers, manual laborers, daily paid workers that are mainly uneducated or at most attended secondary school education and degree holders that are jobless (Oyedeji, 1985). Thus one can belong to high SES if he has high income and occupation without high education. One can also belong to the low SES with high education but low occupation and low income.

Knighthood of St Christopher is an order in the Church of Nigeria, Anglican Communion. The members belong to the high socioeconomic status. They support the church financially among other ecclesiastical duties assigned to them. The members meet at the beginning of each year to celebrate their Family Day. During the occasion of their 2018 Family day celebration, medical outreach was extended to them. The medical exercise was to educate them on the prevalence of hypertension, diabetes mellitus and chronic kidney disease, the epidemiology and complications of the diseases and the availability of screening tests for them. They were counseled before the exercise and they gave their oral consent. Those that did not consent were excluded. Those that consented were asked to come for the exercise fasting overnight and with morning urine sample collected in clean specimen bottle. They are 214 that attended and participated.

Height was measured using an improvised stadiometer. A measuring tape was used to calibrate a portion of the wall in the examination hall. The calibration was done in centimeters to the nearest 0.1 cm. The participant stood on bare feet with back against the wall with his/her heels touching the wall. The height was read by placing a flat object (ruler) horizontally on the crown of the head and at 90o to the calibration on the wall. The value, to the nearest 0.1 cm was read and recorded as the height.

The weight was measured using Hanson Emperors Bathroom Scale calibrated to the nearest kilogram. The scale was set to zero. The participant, in light dress, having removed his/her phone, wrist watch and other heavy materials on his/her body climbed the scale and looked straight forwards. The examiner read the value to the nearest kg and recorded that as the weight.

Double G sugar monitor (Blood glucose meter) manufactured in USA for Double G Industries Ltd., exclusively distributed in Nigeria by Davinny Pharmaceutical Lt., was used to check the fasting blood sugar level. The thumb was pierced with a lancet after cleaning with cotton wool spirit swab. The tip of the test strip was placed at the edge of the blood expressed from the prick. The blood seeped in and filled the test area. The value automatically appeared in 5 s and was taken as the blood sugar level. Fasting blood sugar level above 126 mg/dl was regarded as high and recorded as diabetes mellitus. Known cases of diabetes mellitus on treatment are also recorded as diabetes mellitus even if the FBS is less than 126 mg/dl.

Association of General and Private Medical Practitioners of Nigeria (AGPMPN), Anambra State branch organized a medical outreach as part of their Scientific Conference 2018. Ebenebe, a rural town of about 45,897 according to the 2006 Nigerian Census, was selected for the medical outreach. The inhabitants are peasant farmers,  petty  traders,  manual  laborers  and  artisans.  They  lack adequate medical care and have poor health indices. The Local Government Chairman, the Igwe (king) of the town and the priests in the local churches were informed of the outreach in the advocacy visits before the event. They consented and mobilized their people for the activity.  The methodology for collecting data used for the Knights was used for the rural people. For blood sugar test, some ate food before coming for the exercise. For those people, the sugar level was recorded as random blood sugar. Values above 160 mg/dl were regarded as high. The number that attended and participated is 317.

Data were analyzed using Statistical Package for the Social Sciences (SPSS) version 20. Proportions were calculated. Data analysis was done with Z and T tests. Fisher’s exact test was used when the expected values were less than 5. Results are presented in tables as proportions with their P - values.

The mean age of the participants in years in the high SES is 58.69 ± 10.26 and 57.77 ± 15.54 in the low SES. The distribution of participants by socio-economic status and gender is as shown in Table 1. Having dichotomized the participants into high SES and low SES, their educational status, occupation and income are excluded in this analysis.

In Table 2 the distribution of gender of participants by marital status is shown. There are significantly more widows than widowers in each SES. The frequency of hypertension in the high SES as represented by the knights and ladies is 60.7 and 66.9% in the low SES as represented by the Ebenebe community. The frequency of diabetes mellitus and combined frequency of both disease conditions are shown in Table 3. Table 4 shows the distribution of the frequency of hypertension and diabetes mellitus individually and jointly stratified by age groups.

Hypertension affects the middle adult age group more in the low SES  than  in  the  high  SES  but  for  diabetes mellitus the middle and old adults bear the brunt more. The combined frequency is more in the high SES especially in the middle adult group in high SES. The severity of hypertension as measured by the mean of the systolic BP values and the mean of the diastolic BP values are shown in Table 5. So also is the severity of diabetes mellitus as measured by the mean of the blood sugar levels. This is stratified by SES. From Table 5, the average person from 20 years and above from the low SES is a systolic hypertensive since the mean systolic blood pressure is more than 140 mmHg.

The current study demonstrated that females participated in the outreach  more than males (Table 1). This is similar to the findings of Ige and Nwachukwu (2008). Females have better health seeking behavior than males (Mackenzie, 2007; Ihaji, 2014). This may explain why more females participated than males. Table 2 shows that there are more widows than widowers. Generally, men marry women younger than their age. Since age is an important factor in mortality, men tend to die earlier than their wives. This may also explain why more females attended the outreach because they are in absolute majority. This higher population of widows than widowers is more evident in low SES than high SES. This can also explain why significantly more females than males attended in the low SES than in the high SES.

Overall frequency of hypertension does not differ between high and low SES but when stratified by age group, it is found to be significantly more in age group 45-64 years in low SES than in high SES. Thus hypertension is more in the middle age group of the poor segment of the society. The burden of hypertension, measured by both the mean of systolic blood pressure and mean of diastolic blood pressure is more in the low SES than the high SES. It is this segment that engages in manual labour like agriculture. It is also the productive age group of the society that has dependent relatives and carries economic responsibilities.

Similar age group in the  high  SES  suffers  more  from diabetes mellitus since more people from high SES suffer from diabetes than from low SES and this significance is in the middle and old age groups. However, the burden of diabetes mellitus measured by the mean value of blood sugar is the same in both segments of the society. The middle age groups of both SES have different challenges. This goes to show that frequency of hypertension and diabetes mellitus depends on SES and this dependence is affected by age group. We did not find similar literature to compare this finding with. The combined frequency of hypertension and diabetes mellitus was found to be 14.0% in high SES and 6.0% in low SES and the difference is significant. This combined frequency is noticed in middle age group and in old age group. It does not exist in the early adult age group. Among the middle age group, the high SES suffers more from the combined frequency than the low SES. The difference in old age group is also significant. It is known that comorbidity of hypertension and diabetes mellitus has worse outcomes than single morbidity (Govindarajan et al., 2006). So these age groups among the high SES are more vulnerable than their counterparts in the low SES. The more vulnerable group is the middle adult age group. Incidentally, the captains of industry, politicians, business executives that hold the economy of the state fall into this category.

The bench mark for diagnosis of hypertension was 140/90mmHg according to the 7th Joint National Committee (JNC 7) Hypertension Guidelines report. Lower benchmark would have yielded higher prevalence. Moreover, the blood pressure was checked on one occasion only. It is required to be checked on at least two occasions except there is hypertensive emergency. Another drawback is that diabetes mellitus was diagnosed by using the fasting (or random) blood sugar level instead of HbA1c glycated hemoglobin test. These drawbacks were because the data were collected during a medical outreach and it would have been very difficult to gather the same people to repeat the data collection at a later date.