Tuberculosis (TB) treatment failure compromises its elimination as recommended by Sustainable Development Goals. The purpose of this study is to determine the factors associated with pulmonary TB treatment failure in Togo between 2015 and 2016. An unmatched case-control study was conducted on cases of pulmonary TB under treatment at all of 47 TB Diagnostic and Treatment Centers (DTC) in Togo between 2015 and 2016. Treatment failure of TB was defined as any patient whose sputum smear or culture was positive at the fifth month or later during treatment. Controls were patients whose smear sputum was negative at the fifth month of treatment or later. Logistic regression model was performed to identify independently associated factors by calculating Adjusted Odds Ratio (AOR). In multivariate analysis, factors associated with treatment failure were: Positive sputum result in second month (AOR = 38.75; 95% CI [10.52-142.76], p≤0.001), occurrence of side effects [AOR=3, 61; 95% CI (1.06-12.22), p=0.038], treatment interruption for at least 14 days [AOR=8.15; 95% CI (2.35-28.28), p≤0.001], absence of family-based Directly Observed Treatment practice (AOR=23.76; 95% CI [5.66-99.64], p≤0.001). The study identified the socio-demographic and clinical factors of TB treatment failure whose inclusion in action plans would contribute to achieve TB elimination in Togo.

Tuberculosis (TB) is a bacterial infection caused by Mycobacterium tuberculosis, also known as Koch's Bacillus.  It  can  affect  all   organs,  but   the   lungs   are affected in most cases. One third of the world's population is infected with Kock's Bacillus, but only a small proportion will develop  TB (Dye  et  al., 1999).  The Global TB report estimated that 10.0 million people developed TB disease in 2017, with 1.3 million deaths among HIV-negative people and with an additional 300 000 deaths from TB among HIV-positive people (WHO, 2018). It is one of the top 10 causes of death in the world (European Centre for Disease Control and Prevention, WHO – European Region; WHO, 2018). Low and middle-income countries are the most affected and accounted for 97% of reported TB cases globally (WHO, 2018).

Tuberculosis incidence, which declined sharply around 1980, increased with HIV epidemic emergence and contributed to a further increase in the burden of TB (Mlotshwa et al., 2016; Adamu et al., 2017; Pefura-Yone et al., 2017; Workicho et al., 2017). Indeed, TB and HIV co-infection is a deadly combination (Shuldiner et al., 2014; Baghaei et al., 2016; Cui et al., 2017; Heunis et al., 2017; Takarinda et al., 2017; Nagu et al., 2017). According to WHO report, 0.4 million of the 1.2 million deaths from TB in 2015 were due to TB/HIV co-infection. The new vision for TB control is in line with the Sustainable Development Goals (SDGs). It aims to end the global TB epidemic by reducing the number of TB deaths due by 90% and reducing TB incidence rate by 80% by 2030. Tuberculosis treatment regimen is a multidrug therapy that lasts six months and treatment outcomes are often marked by unwanted events such as death, lost to follow-up, but also treatment failures. Tuberculosis control interventions have contributed to reduce TB incidence by an average of 1.5% per year since 2000. Mortality also declined by 47% between 1990 and 2015, saving 49 million lives (WHO, 2018).

Tuberculosis studies conducted in Togo between 1990 and 2016 were based on the analysis of secondary data from universities hospitals registers. They covered the epidemiological profile of peritoneal TB (Darré et al., 2015), TB in children (Segbedji et al., 2016), miliary TB (Hounkpati et al., 2008)and radiological features (Tchaou et al., 2012). None addressed the analytical aspects of TB cases treatment outcome in general and treatment failure in particular, despite the doubling of the number of cases between 2015 and 2016 and the threat they pose to TB elimination. It is in response to this lack of control of the determinants influencing the treatment outcome of positive microscopy pulmonary TB cases in Togo that this study was conducted to identify the clinical and socio-demographic factors associated with pulmonary TB in Togo from 2015 to 2016.

An unmatched case-control study in Togo was conducted.

Study population was all patients of positive microscopy pulmonary TB recorded in 2015 and 2016 by TB Diagnostic and Treatment Centres (DTC) of Togo. All selected patients who consented to participate in the study were included.

Any patient with positive pulmonary TB in 2015 or 2016 in whose sputum smears at or after the fifth month of treatment was positive. It is a case of treatment failure.

Any patient with positive pulmonary TB in 2015 or 2016 whose sputum smears at or after the fifth month of treatment was negative. It is a cured case.

The dependent variable was treatment failure or cure. The independent variables were the socio-demographic and clinical characteristics associated with TB treatment failure. Socio-demographic characteristics were: age, sex, level of education, socio-professional category, distance between the Diagnostic and Treatment Center and patient’s residence place, marital status, residence area (rural or urban). Clinical characteristics described were serological status of the Human Immunodeficiency Virus (HIV) stratified by sex, Cotrimoxazole prophylaxis in HIV-positive individuals, Anti-Retroviral Treatment (ART) for HIV-positive patients, the use of traditional medicine during TB treatment, Follow-up by home visit of care provider during the intensive phase (first two months) of treatment, Follow-up by home visit of care provider during continuation phase (from the 3rd to 6th month) of treatment.

Interviewers    were     trained     on    the   use   of   data   collection questionnaire. It was person in charge of the DTCs. This questionnaire was tested, reviewed and validated before being used during the survey. Data were collected by TB registers review and treatment cards to identify patients to be interviewed and report data on clinical and socio-demographic characteristics. Patients identified were thereafter sought in community or invited to the DTC where an individual interview was conducted using a semi-structured questionnaire to record information on compliance, occurrence of side effects, family-based Directly Observed Treatment (DOT) and follow-up.

After the survey, each questionnaire was reviewed to ensure the completeness and quality of the information provided. For missing data and outliers, interviewers were contacted by telephone to complete the missing information and correct misreported information.

For analysis, Excel database was imported into the Epi Info software version 7.2.1.0. In descriptive analysis, proportions, ratios, means and standard deviations were calculated to describe the socio-demographic, clinical and treatment characteristics of the cases and controls. Statistical difference was appreciated using Chi2, Fisher Exact and ANOVA tests. A univariate logistics regression was used to select variables with a p-value of <0.25 for inclusion in the baseline model in multivariate analysis. In a top-down multivariate logistics regression model, Adjusted Odd Ratios (AOR) were calculated and tested by the uncorrected Chi2 test to identify association with treatment failure of pulmonary TB.  A p value <0.05 was used for the significance interpretation.

The Bioethics Clearance Committee in Health and the Ministry of Health of Togo gave their approval for the study before it was carried out (N°012/2016/CBRS June 22 2017). Participants expressed their written informed consent to take part to the study and received information on TB.

In univariate analysis, factors associated with treatment failure were:  Socio-demographic characteristics (Table 1) :1) Rural residence; 2) Lack of money to travel to the DTC; 3) Lack of patient awareness on TB; 4) Lack of financial support and 5) food or other support from family members. 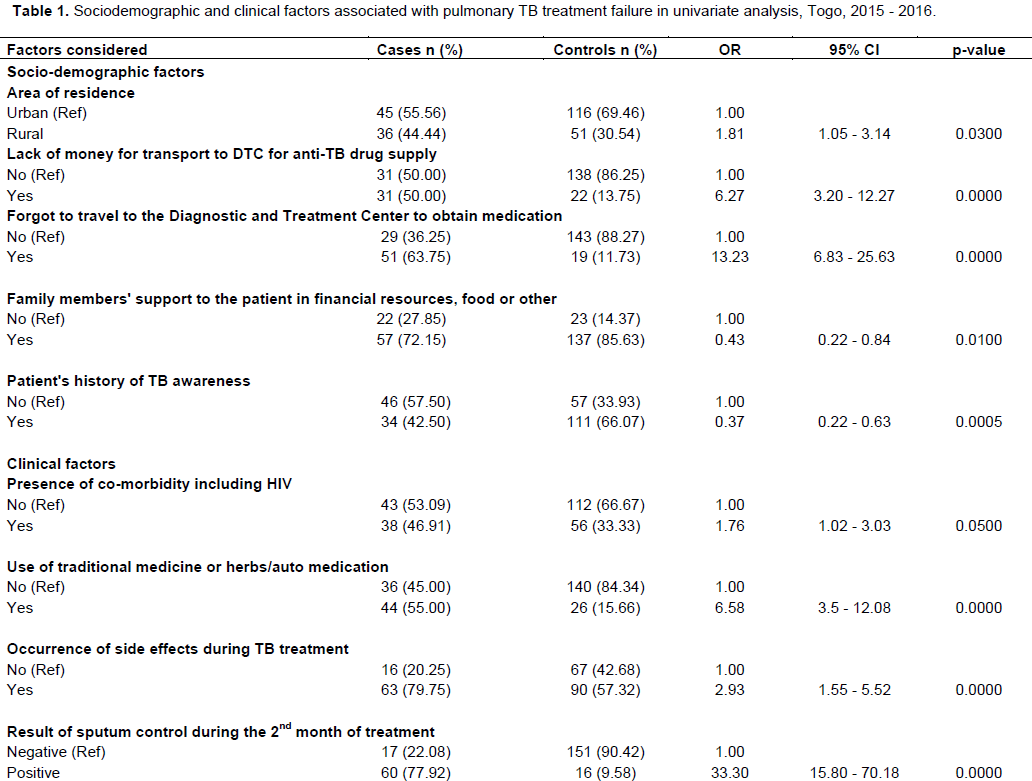 Clinical features associated with treatment failure were: Presence of co-morbidity associated with TB (HIV, diabetes, asthma, hypertension): Positive result of microscopic examination in the 2nd month of treatment; Occurrence of adverse reactions during treatment; Absence of at least one home visit during the first two (02) months of treatment; Use of traditional medicine; interruption of anti TB medication for at least 14 consecutive days.

In multivariate analysis, in the logistic regression model, the following factors were independently associated with treatment failure (Table 2).

Taking anti-TB drugs for at least one month defined as history of anti-TB drugs treatment was associated with treatment failure. In Uzbekistan (Karo   et   al.,   2015),   Asia   (Lee   et  al.,  2012; Scheelbeek et al., 2014), America (Albuquerque et al., 2001)and Africa (Nimagan et al., 2015), the history of anti-TB treatment has been identified as a risk factor for treatment failure. This could be the fact that an incomplete initial treatment put under drug pressure, the microorganism, which subsequently developed resistance to anti-TB drugs. These cases of failure could also correspond to the inaugural occurrence of authentic cases of pharmaco-resistance (He et al., 2011; Lackey et al., 2015; Lema et al., 2016). Cases of treatment failure would have been nearly 39 times the odds of having a positive result during the microscopic examination of sputum control in the 2nd month of treatment than controls. This was also found in a study done in 2009 in Burkina Faso (Sawadogo et al., 2015), in China in 2011 (Wang et al., 2017) and in Ethiopia in 2010 (Muñoz-Sellart et al., 2010). This could be explained by irregularity in taking anti-TB drugs due to forgetfulness, the occurrence of side effects and especially the absence of family DOTS practice. This could also include cases with very high density of Acid-Fast Bacilli (AFB) at diagnosis or cases of bilateral pulmonary TB (Kuaban et al., 2009; Bouti et al., 2013; Mlotshwa et al., 2016). The occurrence of side effects during TB treatment was associated with treatment failure in cases compared to controls. This association was also found in Ethiopia (Sinshaw et al., 2017) and in Canada (Yee et al., 2003). The occurrence of side effects, whether serious or not, compromises the success of treatment, particularly TB, whose success is based on a long course of multidrug therapy. This multidrug therapy can also potentialize the risk of side effects occurring through drug interaction, especially in patients with co-morbidities such as HIV infection, arterial hypertension and many other conditions that require combination therapy. These side effects may also occur due to certain liver diseases and renal failure that compromise drug metabolism. In this study 21% (17/81) of treatment failure cases had co-morbidities such as diabetes, asthma, liver disease, sickle cell disease, kidney disease other than HIV infection. Of the 69 TB/HIV co-infection cases representing approximately 30% of all patients included  in the study, respectively 97% and 90% were taking, in addition to anti-TB drugs, antiretroviral drugs (ARVs) and Cotrimoxazole.  Dosage errors at the beginning of treatment due to lack or misjudgment of patient weight, or during treatment due to non-adjustment of the dose in a case of weight loss of the patient could also explain the occurrence of these side effects and compromise the continuation of anti-TB treatment. These side effects, when they occur, can lead to discontinuation of treatment due to their severity. Although not severe, their occurrence may create a feeling of fear and anxiety in patient about innocuousness and effectiveness of treatment, which may result in either an irregularity in taking or a complete interruption of the treatment. The lack of implementation of Directly Observed Treatment (DOTS) by a family member had 3 times the odds of developing treatment failure than cure. DOTS strategy at community level consists of the administration of anti-TB drugs to patients by a family member or a village community health worker. Because of the supervision of drugs taking by a trusted person, compliance with the treatment  is  assured  and  thus  increases  chances   for successful treatment. This strategy has demonstrated its efficiency as reported in several studies worldwide: Europe (Juan et al., 2006; Balabanova et al., 2006; Siemion-SzczeÅ›niak and KuÅ›, 2009), Asia (Anuwatnonthakate et al., 2008; Shrivastava et al., 2014), America (Ferreira et al., 2011; Pasipanodya and Gumbo, 2013), Africa (Elmahalli and Abdel-Aziz, 2007; Ntshanga et al., 2009; Sisay et al., 2016). However, Nateniyom found that its practice was inadequate for TB treatment in prisons (Sinshaw et al., 2017).

Because of the low number of cases of treatment failure, the difficulty in finding ex-TB patients to interview and the distribution of cases and controls to be included in the study across the country, the sample size was not enough large to give a great power to the tests.

Capacity  building   for   DTC   managers   on    treatment education and the implementation of treatment supervision by a family member could optimize TB treatment compliance in Togo. The National TB Control Program should also mobilize financial and logistical resources for home visits of patients under treatment and set up microbiological surveillance of TB cases to determine the mycobacteriological profile of TB pathogens in Togo.