Success of lymphatic filariasis control in Benin: Effects of Ivermectin and Abendazole on microfilaraemia

Lymphatic filariasis (LF) is a parasitic disease that is endemic throughout sub-Saharan Africa, infecting approximately 40 million people. The aim of this study was to determine effect of Ivermectine and Albendazole on microfilaraemia in 10 communes that have completed 5 rounds of MDA in Benin. The study was both retrospective and prospective. The retrospective part consisted of collecting the information in the registers of the National Communicable Diseases Control Program (NCDCP) in order to determine the geographical and therapeutic coverage during the period of MDA. The prospective part, which consisted in the realization of a nocturnal microfilaraemia, took place with the participants of 5 years and more. Data were analysed using EpiInfo (USD, Inc., Stone Mountain, GA) version 6. Differences in proportions were calculated by Chi-square, with significance level at 0.05. The average geographical and therapeutic coverage was in line with WHO recommendations in several communes. A total of 3121 people were clinically examined and sampled. Chronic manifestations were found in approximately 1% of the total population while only one person had a positive thick drop of W. bancrofti. Since microfilaraemia is <1% in the study communes, the standard recommended by the WHO for the success of MDA, our results confirm the effectiveness of Ivermectin and Albendazole on microfilaraemia and can therefore contribute to the control of LF in Benin.

Lymphatic Filariasis (LF) is a Neglected Tropical Disease (NTD) primarily prevalent in poor populations in 73 countries (World Health Organization [WHO], 2013a). About 120 million people in  83  countries  in  the  tropical and subtropical regions of the world are infected, with an estimated 1.34 billion people at risk (WHO, 2010). In Africa, it is caused by Wuchereria bancrofti and transmitted by Anopheles and  Culex  mosquitoes (WHO, 2010, 2013b). The main clinical manifestations being lymphedema, hydrocele, and elephantiasis (Addis et al., 1995). LF has been identified as the second leading causes of permanent and long term disability in the world (WHO, 1995, 2010). The disease is rarely fatal, but clinical manifestations carry grave personal and sociocultural consequences for those affected and their immediate family members.
The fact that humans are the only reservoir host for LF, together with the availability of simple, safe, and inexpensive drugs for treatment and effective diagnostic tools, led to the recognition that LF might be eradicable (Ottesen et al., 1997). Accordingly, the Global Programme to Eliminate Lymphatic Filariasis (GPELF) was launched in 2000, aiming to eliminate LF as a public health problem by 2020 (WHO, 1997). The recommended strategy is to treat entire at-risk populations annually through mass drug administration (MDA) with a single dose of Ivermectin and Albendazole (IVM + ALB) in sub-Saharan Africa for a minimum of 5 years (Ottesen et al., 1997; WHO, 2013c). Indeed, following five annual rounds of MDA, the density of circulating microfilaria in infected individuals may be reduced and LF transmission disrupted.
The West African country of Benin was among the first countries to conduct a national baseline LF prevalence survey in 2001 in order to estimate the burden of the disease. It resulted that 48 communes were endemic of FL. Shortly, following these results, Benin launched its national programme for LF elimination and began, in 2001, implementing MDA within three communes. MDA then scaled up progressively to 23 communes in 2005. They stopped MDA in 2009 and are engaging in post intervention surveillance since 2013. Currently, 25 other communes are under MDA and ten of them have already completed the World Health Organization (WHO) recommended minimum of five annual effective rounds of MDA.
The key challenge now is to determine whether this MDA has been sufficient to interrupt transmission in these communes. Following WHO guidelines (WHO, 2013c), MDA can safely be stopped after monitoring effectiveness of MDA by assessing microfilariaemia in nocturnal calibrated thick blood. Indeed, the success of MDA depends on interrupting parasite transmission by reducing the level of microfilariae circulating in the blood. The current benchmark for success as defined by WHO is <1% microfilaria prevalence in a community with five continued rounds of MDA (WHO, 2013c). The aim of this study was to monitor nocturnal microfilaraemia to ensure successful MDA for LF elimination in the 10 communes.

The study was conducted in ten endemic communes located in five departments in south, center and north Benin (Figure 1). Table 1 shows the different communes with the departments, the villages involved in each commune, size of the population of  these  villages and baseline microfilaremia before MDA. These villages were randomly selected after census of all the endemic villages that met the following criteria: (i) To house a population of at least 500 inhabitants; (ii) Have completed at least five (5) round of MDA. One village was selected in each commune.The study was undertaken from March to August 2016 with a retrospective and prospective component. The retrospective component involved review of data registers by National Communicable Diseases Control Program (NCDCP) of, Ministry of Health of Benin. The data concerned the total number of villages and populations treated, the number of tablets received, the number of tablets used, the number of tablets remaining to establish the geographic and treatment coverage rates achieved in the study sites during the 5 years of MDA. The prospective component concerned the realization of nocturnal microfilaraemia with two phases: The preparation phase and the survey phase. The preparation phase consisted of the drawing up the questionnaire, the training of the health workers involved in the study, and the meeting of local authorities. The training was focused on the objectives of the study, how to obtain the informed consent, how to complete the questionnaire, how to recognize the clinical signs of bancroftosis, and how to perform and read the thick drops. The survey phase consisted of participant recruitments, clinical examination and blood sampling for the thick drops realization. 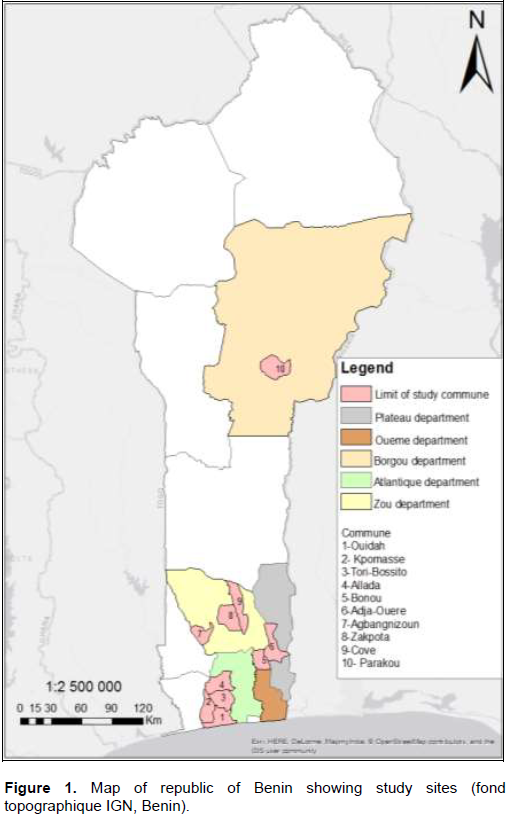 The sample size was at least 300 participants (either male or female) aged ≥ 5 years per commune, WHO guideline based (WHO, 2013c). On arrival on the site, the study team settles in the place indicated welcome the participants and explain the study to them, and then obtaining their informed consent. The participants were then recruited progressively as they arrive until they reach the size of 300. After obtaining informed consent, visual observations of clinical manifestations of lymphatic filariasis and questionnaire administration were conducted. A structured questionnaire was administered to obtain information on the subjects' demographic data (age and sex). Trained medical personnel recruited for this study examined all the persons and chronic cases of hydrocele and elephantiasis were recorded.Blood sampling was done from 11:00 p.m. to 03:00 a.m. using Sasa and Simonsen recommendations about nocturnal periodicity of W. bancrofti (Sasa, 1976; Simonsen et al., 1997). Finger prick blood samples were taken from the study participants by qualified and/or trained lab technicians for the preparation of the thick drop (WHO, 2013c). Blood samples were collected in absolute aseptic conditions using sterile and single use materials. Standard procedures were used for the processing and analysis of the blood samples (WHO, 1991). The slides were dried, stored in a slides box and transported to the laboratory of the commune health centers, and then stained with Giemsa. Microscopic examination of slides was done independently by bright field microscopy (magnification x100), by two experienced laboratory technicians. W. bancrofti microfilariae were identified based on the specific morphological features (Cheesbrough, 2005), counted and the results expressed as microfilariae per ml of blood (mf/ml). When any discrepancy was found, the preparation was re-examined by another lab technician. Microfilaria number was counted in each positive slide and recorded. Quality control was done on 10% of the negative slides and on all positive slides in the parasitology laboratory of Centre National Hospitalier et Universitaire de Cotonou. Subjects with a positive microfilariae thick drop were treated with Ivermectin and Albendazole. Those with chronic manifestations have been cared of by national programme for the elimination of LF.
Data analysis
Geographic coverage is the proportion expressed as a percentage of villages implementing MDA among all the villages that need this treatment   in  the   commune.  The   therapeutic   coverage   is   the proportion expressed as a percentage of the individuals who ingested the drug among the population of the commune.The microfilaria prevalence per site were calculated as the proportion of blood slides found positive for microfilariae. The microfilarial density (mfd) per site was calculated as the average number of microfilariae in slides found positive for microfilariae per milliliter of blood (presuming 60 µl per slide) (WHO, 2013c).Data were analysed using EpiInfo (USD, Inc., Stone Mountain, GA) version 6. For qualitative variables, frequencies and proportions were determined. For quantitative ones,  averages  with their standard deviations, minima and maxima were calculated. Differences in proportions were calculated by Chi-square, with significance level at 0.05.
Ethics statement
The surveys obtained the ethical approval of the National Ethic Committee for Health Research of Benin (Comite National d’Ethique pour la Recherche  en  Sante;  Ministere  de  la  Sante CNERS-MS)  under the authorisation reference 008/CNERS-MS. With the approval of the CNERS-MS, written consent was obtained from the chief of each village and traditional authorities. The objectives and schedules of the study were first explained to community leaders and to all eligible individuals in local languages. Writing agreements were obtained from those who agree to participate, under the discretion of community leaders. Approval of parents or legal guardians was taken for minor participants. 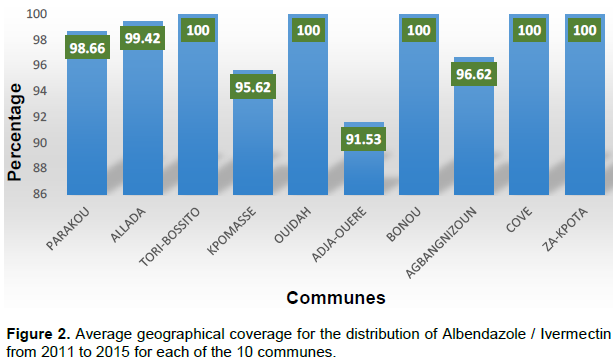 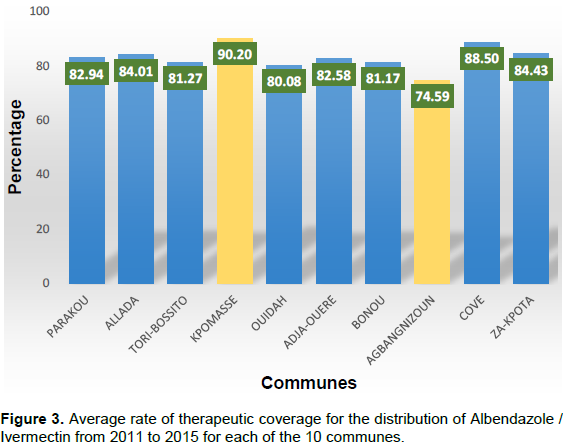 A total of 3121 inhabitants with 48.2% of males were enrolled from the 10 communes with their age distribution ranging from 6 to 78 years. The mean age was 25.85 ±0.59 years. Subjects under the age of 50 years were the most represented (87% versus 13% for those over 50 years of age). Thirty one out of 3121 were found to be having either elephantiasis or hydrocele thus showing the disease endemicity rate of 1%. Of the 31 clinical cases, 16 (50%) were having elephantiasis and 15 (50%) having hydrocele. Of the 16 elephantiasis cases, Only two were female and most of the clinical cases were in the age group greater than 50 years p<0.001) (Table 2). Only one person was found microfilaraemic giving an overall prevalence of 0.03% with 0.33% in the commune of Parakou which registered the only positive case against zero percentage for the nine other communes. The one person who was microfilaria positive was a 50-year-old female, with a microfilarial  density  of  869 mf/ml  without clinical manifestations. She is a trader with frequent travel to the Federal Republic of Nigeria.

In this study, MDA data showed geographic and thera-peutic coverage almost in line with WHO recommendations for LF elimination. The microfilarial prevalence less than 1% in the study communes after 5 rounds of MDA confirms the efficacy of Ivermectin and Albendazole on the reduction of microfilaraemia and therefore on transmission in Benin. This efficacy increases from 23 to 33 the number of communes under surveillance. MDA thus proves to be an adequate strategy for the elimination of LF in Benin.

The authors are grateful to all the participants in the study; they are pleased to thank caregivers, laboratory workers from health facility study and the National Communicable Diseases Control Program. This work was financed by RTI Envision and Benin Ministry of Health. This funding has contributed to data collection, laboratory testing and statistical analysis.