Sesame (Sesamum indicum L.) is one of the world’s oldest oil seed crop grown mainly for its seeds. Insect pests are one of the most important factors affecting production and storage of sesame grain affecting both its quality and quantity. In order to assess and determine storage grain loss due to Plodia interpunctella, an assessment was conducted in western zone of Tigray (13°45’ to 14°28’ N latitude and 36°20’ to 37°31’ E longitude) in 2016. Sample of 1 kg sesame grain was taken from 10 small scale’s storage houses in each districts. Collected data analyzed statically with one-way ANOVA. All locations were significantly similar on all parameters. An average weight loss of 17.8% and total percentage loss of 25.2% due to P. interpunctella have been recorded in the surveying areas. P. interpunctella has distributed throughout the sesame producing area of western zone of Tigray and found to be causing substantial grain loss, especially for sesame stored more than a year. Further studies have to be conducted on control strategies of Indian meal moth P. interpunctella.

Sesame (Sesamum indicum L.) is an annual crop from the Pedaliaceae family grown mainly for its seeds that contain approximately 52 to 57% oil and 25% protein (Weiss, 2000; Wijnands et al., 2007). Sesame annual worldwide grain production is around 4 million tonnes (FAOSTAT, 2014). In Ethiopia, the North West region is the major sesame seed production area (Alemu and Meijerink, 2010, Wijnands et al., 2007). Sesame is a high value food crop, which is an important source of edible oil. The seeds are very rich in iron, magnesium, copper, calcium and vitamin B1 (thiamine) and E (tocopherol). The seed also contain phytosterols associated with reduced levels of blood cholesterol (Zerihun, 2012). Despite its importance, biotic and abiotic factors greatly affect production, productivity and storage of sesame. Insect  pests are one of the most important factors affecting production and storage of sesame seed both in quality and in quantity. Several pests attack sesame, with potential to cause economic loss around the world. In Ethiopia however, only the sesame webworm (Antigastra catalaunalis) and gal midge (Asphondilia sesami) in pre harvest, sesame seed bug (Elasmolomus sordidus) in post-harvest (Geremew et al., 2012, Muez et al., 2008, Selemun, 2011, Zenawi et al., 2016a, b) and Indian meal moth (Plodia interpunctella) in grain storage are the major pests of sesame. In developing countries, damage caused by storage pests is 10 to 40% where in some rural areas is as high as 80% (Saeidi and Hassanpour, 2014).
In Ethiopia post-harvest losses, including storage losses was estimated at 5 to 26% (Dubale, 2014). The occurrence of post-harvest insect-pests, including Sitophilus spp., Tribolium spp. and P. interpunctella (Hübner) (Lepidoptera: Pyralidae) are main problems in sesame grain management (Géssica et al., 2015). The larvae of P. interpunctella is an external feeder which cause economic grain damages by feeding and secreting silky webs which permeate all substrate and contains larval frass (Filip and SneÅ¾ana, 2012, Mohandassa et al., 2007). This moth species has very strong economic impact, because it uses a wide range of products in its diet (Filip and SneÅ¾ana, 2012; Manuel, 2009).
Any research related to P. interpunctella has not conducted yet in the study area and assessing and determining grain storage loss due to the major storage insect P. interpunctella was an objective of the current study.

Description of the study area
The assessment was conducted in low lands of western zone of Tigray (Setit Humera, Kafta Humera and Tsegede) (Figure 1|) located at 13°45’ to 14°28’ N latitude and 36°20’ to 37°31’ E longitude. It is 1000 km far from Addis Ababa via the Gonder road and bordered by Eritrea and the Sudan Republic in the north and west, respectively. The area has a flat topography with an altitude range between 500 and 800 m above sea level (m a.s.l). Based on the data from Humera Agricultural Research center (HuARC) metrological station, the area is characterized by arid climatic condition with mean temperature of 30°C and annual mean rainfall of 581.2 mm, which ranges from 380 to 870 mm.

Loss assessment
In western zone of Tigray, three districts (Setit Humera, Kafta Humera and Tsgede) were selected knowingly and 10 storages as well using the stratified sampling procedures in each district. Generally, 30 small-scale storages were sampled from the zone. One kilogram of sample was reserved randomly from the small-scale farmers’ sesame storage in each locality. At the time of grain sampling, moisture content of the grains was 7.2 to 7.8% when tested using a moisture meter.
Grain weight loss
Sesame grains are very fine; it is difficult to count manually therefore seed counter machine was used to count 1000 seeds of sesame from a sample. Web tied grains (cocooned) was removed or disbanding before counting. Then a device called illuminated purity work board was used to separate and count affected and unaffected grains. Healthy and damaged grains were counted also using the INDOSAN seed counter machine. Finally, both healthy and damaged grains had weighed using sensitive balance. To estimate the loss (percentage), each sample divided into damaged and undamaged grains and the percent loss had calculated using the following formula:

To avoid the repetition during loss estimation of due to webbing and feeding, only damaged grains were used to estimate feeding loss whereas undamaged but webbed grains used to estimate webbing loss. Ethiopian Commodity Exchange (quality determining organization) rejects sacks that have webbed grains then collectors or producers enforced to winnow or screen it again in order to remove the webbed grains.
Statistical analysis
One-way-ANOVA by Gen Stat 14 was used for statistical evaluation and LSD (0.05) for means comparisons. 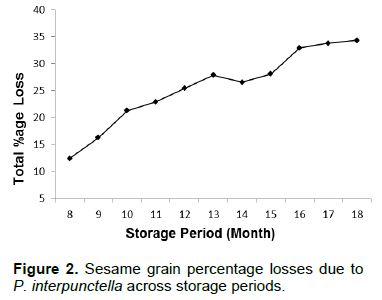 P. interpunctella has very strong economic impact, because it uses a wide range of products in its diet (Filip and SneÅ¾ana, 2012). This pest is an external feeder almost eats the whole grain leaving the seed coat in one side. Sesame grain yield/productivity in the study area is about 400 kg/ha (SBN, 2014). Of this 400 kg, about 71.1 kg is lost during storage due to P. interpunctella (when grain is stored for more than 12 months). May be the weather condition of the storage is suitable for the pest and since no control measures are available in the region, it could have similar distribution throughout all locations. Because the pest is new for the region and there are no mechanisms of control except farmers that winnow again to remove the cocoons/webbed grains (Figure 3). Moreover, this exposes the producers to additional costs and losses. A study conducted in western zone of Tigray, on E. sordidus found large weight loss (94.7%) of sesame grain (Muez et al., 2008). Dennis (2001) reported that P. interpunctella has great role on grain weight loss of stored products. Similarly weight loss on oat by Sitotroga cerealella (same family with P. interpunctella) was found to be 25.7 up to 69.2% (Shahzaib et al., 2012). 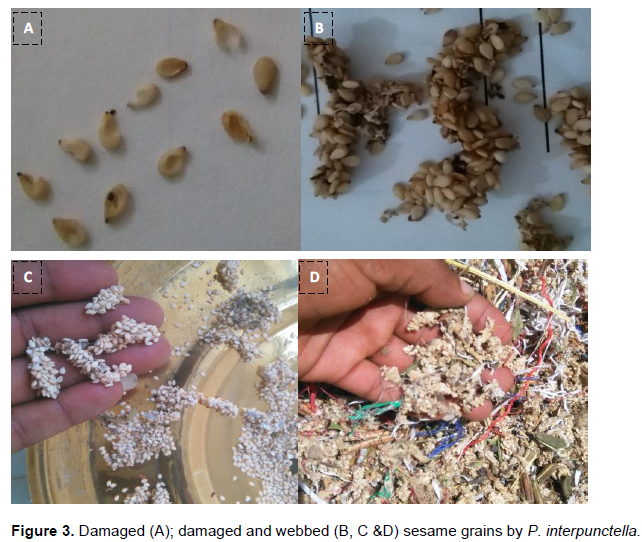 Damage also occurs through the contamination of foodstuff with dead larvae, frass and silk webbing and causing heating and molding of the grain in addition to feeding (Géssica et al., 2015, Manuel, 2009). A study by Shahzaib et al. (2012) revealed that grain loss of 46.9% by storage moths (S. cerealella). P. interpunctella is the most common moth in stored food facilities and is the cause of most complaints from the food industry, sellers and consumers (Manuel, 2009).

P. interpunctella is economically very important pest in western Tigray, north Ethiopia, which causes about 18% weight loss in sesame grains. It is causing grain loss not only through feeding but also by creating silk and webbing the grains together. The pest has distributed throughout the sesame producing and/or storage area of the zone and it is causing substantial storage grain loss up to 25.2%. Based on the results of the assessment, it is better to conduct a designed study on control strategies of Indian meal moth P. interpunctella.