Five and ten percentage rates of leaf powder of Calpurnia aurea (Ait.) Benth and Millettia ferruginea (Hochst) Baker as well as red and white local inert dusts each and their integration with resistance varieties of maize were evaluated as protectant against Sitophlus zeamais under laboratory condition. All treatments of the tested management tactics induced significantly (p < 0.05) higher adult mortality of weevils (8.33 to 71.67) at both tested rates (5 and 10%) in 2 to 4 days of post treatment application than untreated check. The maximum of these were being in integrated treatments, followed by the C. aurea and M. ferruginea, while relatively the minimum were red and white inert dusts treatments, respectively. All of the treatments of integration and other tactics applied at tested rates were also induced significantly (p < 0.05) higher (≥63.16%) inhibition of F1 progeny emergence, higher reduction in grain damage (≤6.67) and weight loss (≤1.12) of maize grain due to S. zeamais than negative control, the maximums of which were caused by integration, followed by the two botanicals, while relatively minimums were induced by inert dusts. Thus, all the management tactics tested at rates of 5% and above (10%) were potent in preventing maize grains against maize weevils and thus, they could be used in managing maize weevils at the rate of 5 and 10% under farmer’s storage conditions in Ethiopia.

Cereal crops play a major role in the livelihoods of smallholder farmers’ in sub-Saharan Africa (SSA), of which maize (Zea mays) being the most important food and cash crop for millions of people in the region (Midega et al., 2016). Besides, maize is the most important basic food grain, providing food and income to millions of resource-poor smallholders in Eastern and Southern Africa region in general and Ethiopia in particular (Tefera et al., 2011). However, in Ethiopia among other things, food security has been greatly threatened by excessive post-harvest losses grains like maize caused by storage insect pests, mainly of the maize weevil and Angoumois grain moth (Worku et al., 2012).  Control of insect pests of stored grains in Africa including Ethiopia have been heavily relied on use of synthetic chemical insecticides among resource poor farmers who lack technical knowledge in the safe handling and use of them (Mvumi et al., 1995; Mvumi and Stathers, 2003). But, environmental pollution, high cost of application, direct toxicity to users, adverse effects on beneficial and non-target organisms, and increased risk to workers safety (Ofuya and Longe, 2009) have been associated as the negative attributes related to their repeated use. In addition to their health and environmental concerns, insecticides are too expensive or frequently unavailable for subsistence farmers in Africa (Demissie et al., 2008). All the aforementioned facts, along with the desire for residue-free grains by consumers, indicate the presence of urgent need for searching and developing of safe, cheap and ecologically sound management alternatives such as botanicals, inert dusts, varietal resistance and integrated pest management (IPM). Thus, the current investigation was initiated with the following objectives: to evaluate the efficacy of integration of two botanicals (Calpurnia aurea and Millettia ferruginea) and inert dusts (red and white locally available inert dusts) with resistance varieties (Melkasa-6Q, MH-138Q and SPRH) relatively to their respective pure (unitary) tactics against Sitophlus zeamais at selected rates under laboratory condition.

The study period
The study was conducted between 1 October 2016 and 30 June, 2017.
Test insect’s culture
S. zeamais adults were collected from maize grains stored in various farmers traditional storage facilities of major maize producing localities Shashogo and Sankura districts of Southern Ethiopia (Figure 1) and brought to the laboratory of Insect Science Insectary of Zoological Science Department, Faculty of Life Science, Addis Ababa University of Ethiopia. These test insects were cultured at 27 ± 3°C and 55 to 70% RH (Jembere et al., 1995; Zewde and Jembere, 2010). Shone variety of maize grains were also obtained from farmer’s storages of the aforementioned districts (Figure 1). It was the most commonly grown hybrid in the region and considered to be susceptible to insect infestation. The grains were kept at -20±2°C for 2 weeks to kill any infesting insects. Broken kernels and debris were removed and the grains were graded manually, where similar sized grains were selected for the experiment (Gemechu et al., 2013). Following the methods by Zewde and Jembere (2010), fifteen pairs of the adult of the test insects were placed in 12, 1-L glass jars containing 250 g disinfested seeds. The jars were then covered with nylon mesh and held in a place with rubber bands to allow ventilation and to prevent the escape of the experimental insects. The parent of the test insects were sieved out after an oviposition time of 13 days. Then, the jars were kept under laboratory condition until F1 progeny emergence. The F1 progeny, which emerged after 30 days, were sieved out and used for the experiment. 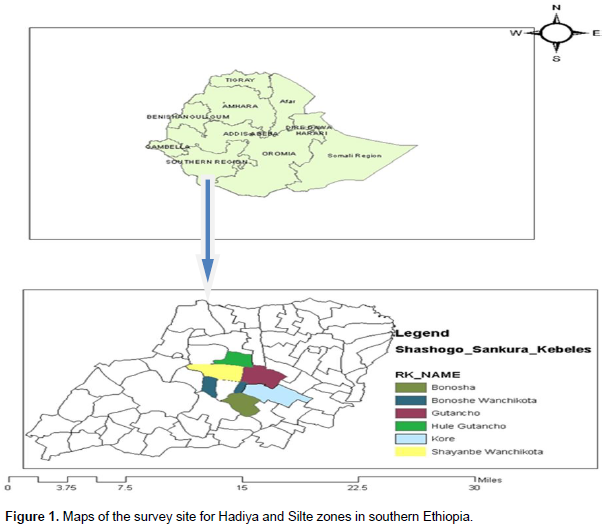 Percentage protection of the experiments
Following similar procedures by previous scientists (G/selase and Getu, 2009), percent protection or inhibition rate in F1 progeny emergence (% IR) was calculated using the following formula:
IR (%) = (Cn-Tn) ×100 / Cn
where Cn is the number of newly emerged insects in the untreated (control) jar and Tn is the number of insects in the treated jar.
Data analysis
Data on adult mortality, F1progeny emergence, and grain damage and weight loss were managed with the Microsoft Excel version 2013 and then were subjected to analysis of variance (ANOVA) of SPSS Version 16. The effect of treatments of unitary tactics and integration on the aforementioned parameters was analyzed using appropriate statistical method, Univariate or two-way analysis of variances. Significant differences between means of different treatments and time of exposure were separated using Tukey's studentized (HSD) test at 5% confidence interval. Difference among means were stated significant when p<0.05 and highly significant when p<0.01. Correlation between the treatments and the efficacy measuring parameters like weight loss and others were determined using Pearson’s correlation of SPSS program of version 16. 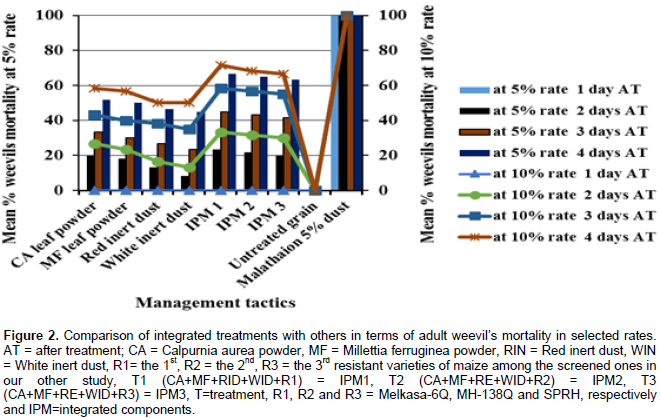 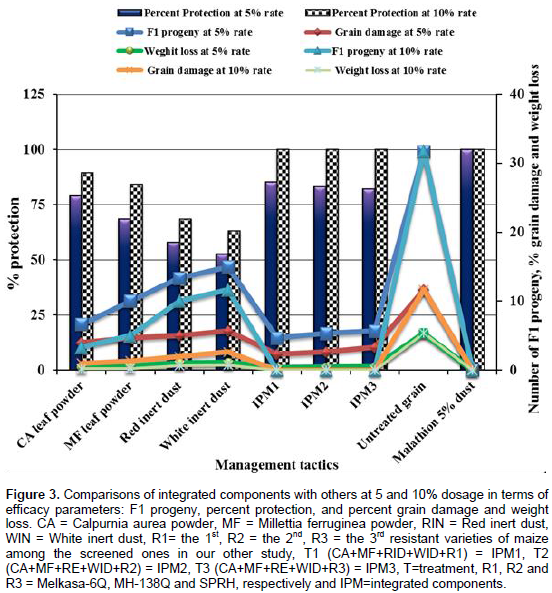 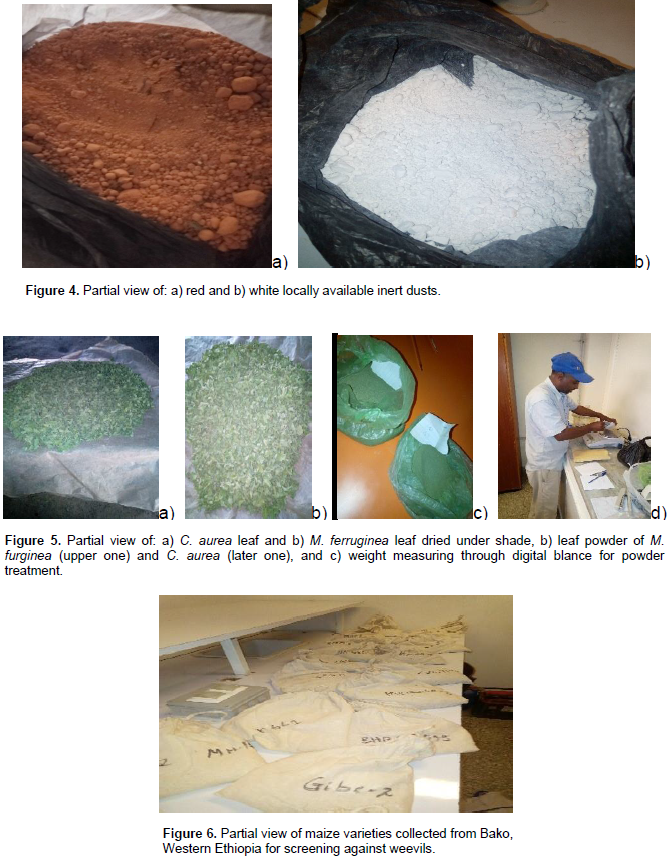 From the present study, it is possible to conclude that all the management tactics tested at the rates of 5% and above (10%) were potent in preventing maize grains against maize weevils attack, though integration was the most effective among them, followed by botanicals and inert dusts. Thus, all of the tested tactics could be used in managing maize weevils as safe, ecologically sound and cheap management alternative to synthetic chemicals at a rate of 5% and above (10%) under subsistence farmer’s storage conditions in the study area and Ethiopia in particular and elsewhere with similar pest problems in general. Besides, it also confirmed that integration rather than unitary one could be used under subsistence farmer’s storage conditions to achieve better protection of stored maize against maize weevils.