Assessment of anthropogenic influence on the level of selected heavy metals (Cu, Zn, Cd and Pb) in soil

The study aimed at assessing potential influence of anthropogenic activities on the level of selected toxic heavy metals in soil in Tsumeb Township, Namibia. This was with a view of evaluating possible implications on human health and across the food chain. Soil samples were randomly collected from stratified areas and taken to the laboratory for pre-treatment and analysis. Soil metallic contents were extracted using acid digestion technique and were quantified using ICP-OES. Experimental protocol was validated using the standard metal addition techniques and was found to be applicable with quantitative metallic recoveries (n= 3) in the range of 85-90%. The overall mean concentration of analysed metals in soil samples ranged from 39.0 - 2532.8 mg/kg (Cu); 59.5- 1994.8 mg/kg (Zn); 1.7-21.3 mg/kg (Cd) and 1.2-141 mg/kg (Pb) across SCP1-SCP4. The analysed metals increased variedly at the SCPs in the order Cu: SCP1>SCP2>SCP4>SCP3; Zn: SCP1>SCP2>SCP4> SCP3; Cd: SCP1>SCP2>SCP3>SCP4; Pb: SCP1>SCP2>SCP3>SCP4. Hence, highest or most profound anthropogenic influence was observed at SCP1 for all metals while the lowest was as SCP4. Strong metallic correlation (r > 0.99) was obtained between all analysed metals and some significant above threshold metallic levels in soil were obtained for Cu and Zn but most worrisome was the high level of Cd obtained in soil. Possible uptake of these metals by plants and transfer across the food chain is highly probable.

The prevalence of toxic heavy metals such as Cd, As, Pb, Zn, Cu and others in the ecosystems at elevated levels continues to be of great concern in view of the health implications. The earth crust is known to contain natural level of heavy metals (Singh et al., 2011). However, as a result of rapid development and industrialization, anthropogenic activities have introduced substantial amount of these metals into  the  environment at an unprecedented rate (Armah et al., 2014). These activities include mining operations, metal foundries, vehicular use, petrochemicals and agricultural such use application of inorganic fertilizers, sewage sludge, pesticides and others. Heavy metals that are mostly found as a result of soil contamination by these activities include copper (Cu), zinc (Zn), lead (Pb), cadmium (Cd), manganese (Mn) chromium (Cr) mercury (Hg), arsenic  (As) and some others (Tahar and Keltoum, 2011; Yan et al., 2012; Aslam et al., 2013).Some of these metals such as Cadmium (Cd) and Arsenic (As) have no physiological benefits; hence their transfer across the food chain and resultant health implication forms the basis of concern. The concerns are justified since Cd is a known endocrine disruptor in human (Kartenkamp, 2011) while lead (Pb) has been implicated in the disruption of gene expression (Gillis et al., 2012). Hence, the interest in monitoring the level and distribution of these metals in the ecosystems including the soil is of utmost importance.
Soil has been described as sink for heavy metals that are released into the environment due to anthropogenic activities (Cheng et al., 2013). The concern about the prevalence of these toxic metals in the environment is exacerbated by their potential for inter-ecosystem mobility. Enrichment of the aquatic bodies by heavy metals as a result of surface soil erosional process has been reported (Wantzen and Mol, 2013; Issaka and Ashraf, 2017). Soil contamination by heavy metals will continue to be of great concern as a result of the health implications on human and wildlife. The implications are reflected through the uptake of these metals by plants, the consumption of metal laden plants by ruminants and the eventual consumption of ruminant by human. Consumption of contaminated water as well as inhalation dust particles are other routes of exposure. Hence, continual monitoring and assessment of these toxic metals in soil is of great importance in view of the fact that soil continues to be viewed as a repository of heavy metals (Cai et al., 2012).
The anthropogenic generated or forms of these heavy metals in soil tend to be more mobile and readily bioavailable when compared to the pedogenic or lithogenic forms (Kaasalainen and Yli-Halla, 2003). As a result of this bioavailability, the metals can be taken up by plants with further distribution and accumulation across the food chain. The migration or transfer of heavy metals from soil to other organisms such as lower animals (Lavelle et al., 2004; Ting-li et al., 2014) and plants (Lato et al., 2012; Aktaruzzaman et al., 2013) have been reported. Soil metallic burden will eventually affect the sustenance and livelihood of lower organisms such as earthworm, insects and others.
Therefore, these lower organisms are frequently used as indicator organisms of soil heavy metals burden due to their close contact and dependence on this ecosystem. Several organisms such as earthworms, insects and plants that are in close contact with soil have been used as environmental indicators of the level of heavy trace metals level (Awofolu, 2005; Karadjova and Markova, 2009; Aleagha and Ebadi, 2011; Steindor et al., 2016). Related studies also reveal inter-ecosystem migration of trace metals from terrestrial (soil) to aquatic (Pelfrene et al., 2009; Lynch et al., 2014) and the atmospheric (Perin et al., 2012) ecosystems.
In view of the environmental and human health implications of the prevalence and mobility of these toxic heavy metals, this study aimed at assessing the influence of anthropogenic activities on the level of selected trace metals (Cu, Zn, Cd and Pb) in soil from a local municipal area of Namibia. Several commercial and industrial activities that could potential influence the metallic level and distribution are located in the area.

Study area
The study was conducted in the local municipal area of Tsumeb in the Northern part of Namibia. The geographic description of the area is: altitude of 1, 266 m, latitude -19, 2333 (1913’59.880’’S) and longitude 17, 7167 (1743’0.120’’E). The study area was stratified into four stratum and samples collected randomly from each stratum named as sample collection points (SCPs). Hence the location of SCP 1:S19° 13’ 58.8”; E017° 42’ 35.7”; SCP 2: S 19° 14’ 41.7”; E 017°43’ 12.0”; SCP 3: S19° 15’ 21.6”; E 017° 42’ 08.5” and SCP 4: S19° 15’ 38.5”; E 017° 42’ 43.2”.
Samples and sampling process
Soil samples to the depth of about 100 mm were collected randomly from each sample collection site (SCS) with the aid of clean stainless steel soil trowel. The trowel was washed and rinsed properly with water after each sampling.
Soil samples were collected from the four different sites represented as SCP1, SCP2, SCP3 and SCP4 between the periods of June to November 2015 using stratified random sampling within each stratum. Six different sampling periods (SPs) was undertaken between July and Nov 2015 with a view of assessing possible trend and variation in trace metal level across sampling periods and within sample collection sites. Control samples were collected from an area in Windhoek which is about 350 km distance away from the sampling site. This are is characterised by very low anthropogenic activities. These were placed in transparent plastic zipper bags, labelled and taken to the laboratory for further treatment and analysis.
Sample treatment and analysis
Soil samples were oven dried at 30°C for 12 h and then grinded gently in an acid washed mortar and pestle and then passed through a sieved with 0.63 um pore size. All metal determinations were based on the final fine powdery samples. The metallic content of soil samples were extracted using acid digestion technique as previously described by Awofolu (2005). Briefly, about 5 g of soil samples was placed in 100 mL beaker and 3 mL of 30% H2O2 was added. This was left to stand for about 1 h until the vigorous reaction ceased. 75 mL of 0.5 M solution of HCl was then added and the content heated gently at low heat on the hot plate for about two hours. The digest was allowed to cool and then filtered into 50 mL standard flask. Triplicate digestion of each sample together with blank was also carried out. Quality assurance of the analytical process was by standard metal addition and quantification in all cases was by Inductively-Coupled Plasma Optical Emission Spectroscopy (ICP-OES).
Statistical analysis
Possible relationship between analysed trace metals  was determined from the mean metal concentration across the six sampling periods for the four sample collection point (SCP1-4) using the Pearson Correlation Coefficient. The heavy metal contamination factor (CF) was calculated from the ratio of the mean concentration of each metal to that obtained from the control site (CS) in order to assess the extent of contamination at the sample collection site.
CF = X/CS
Where X = mean metal concentration; CS mean metal concentration at control site. CF value of < 1 is regarded as low; between 1 and 3 = moderate; from 3 to 6 = appreciable contamination while > 6 = high contamination.
The pollution load index (PLI) provides an estimate of metal contamination status and was determined as previously described by Tomlinson et al. (1980) and Likuku et al. (2013) and expressed as:
PLI = (CF1 x CF2 x CF3…. CFn) 1/n
PLI values that is < 1 signify pristine (no pollution) condition; when PLI = 1, it shows minimal or baseline level of pollution while PLI > 1 indicates gross contamination or deterioration in soil quality (Tomlinson et al., 1980). The Analysis of variance (ANOVA) at P < 0.05 was also carried out in order to evaluate whether variation in data between the heavy metals and sampling sites is significant or not significant.

Elevated   levels   of  toxic  trace  metals  in  soil  can   be attributed to anthropogenic activities. Hence, assessment of the level of analysed metals in soil from the study area where potential impactors are located. This was with a view of examining possible anthropogenic influence on metal soil enrichment and potential implication across the food chain. The quality assurance of an experimental process is important in order to check the applicability of the method for sample analysis. Hence result of this process, represented by percentage metal recoveries were in order of 90.4% (Cu); 90.1% (Zn); 85.5% (Cd) and 89.6% (Pb).
Level of trace metals in analysed soil samples
Results of the analysed heavy metals in soil samples across the sample collection points (SCPs) are presented in Tables 1 to 4. The overall mean concentration is as presented in Table 5 while the variation trend of analysed heavy metals across these points is as shown in Figure 1. The mean concentration of trace metals at SCP 1 and across the sampling period ranged from 1785 mg/kg (SP5) – 3755 mg/kg (SP2); 1312 mg/kg (SP4) – 1335 (SP2); 14.5 mg/kg (SP3) – 31.7 mg/kg (SP2) and 97.8 mg/kg (SP1) – 188.9 mg/kg (SP2) for Cu, Zn, Cd and Pb respectively as presented in Table 1. 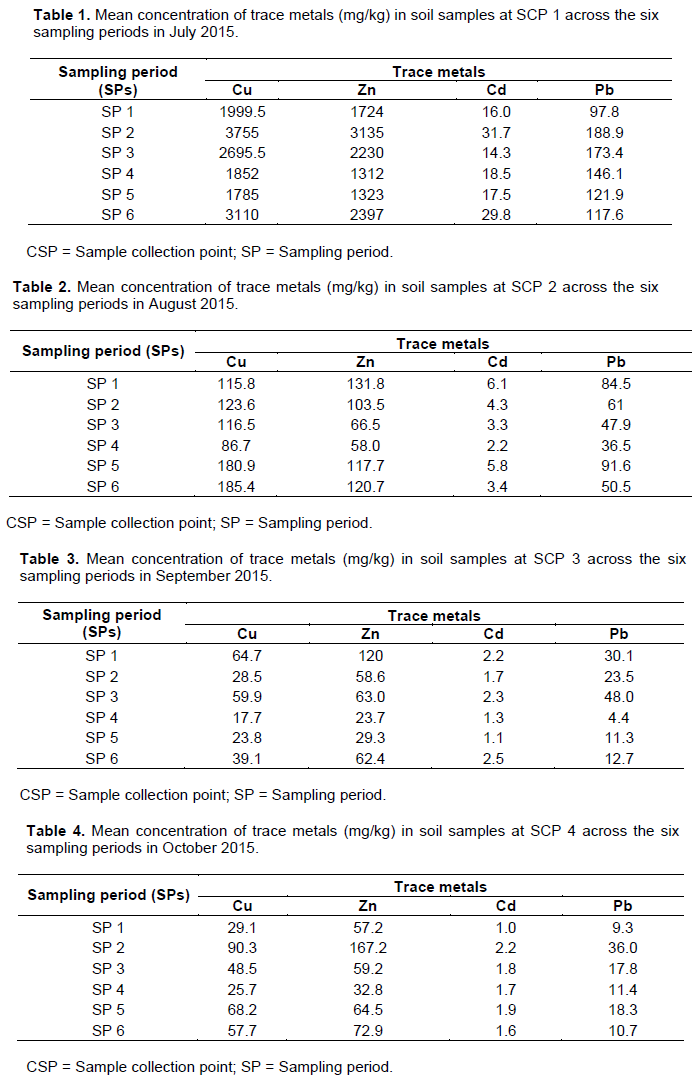 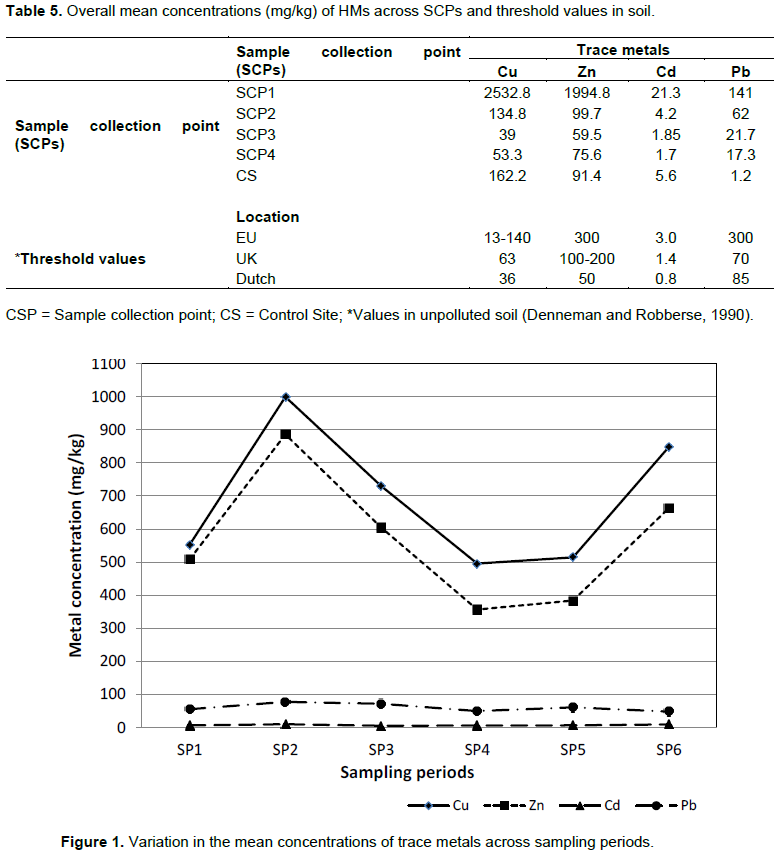 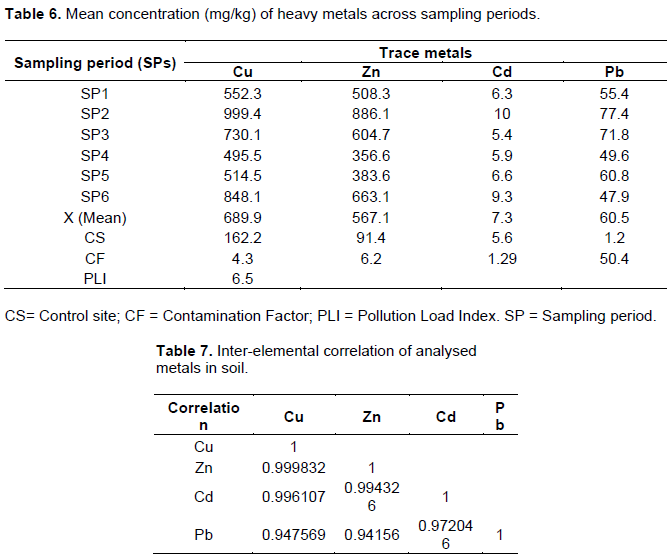