Plants hormones are widely used in agriculture to alter plant characteristics as growth regulators. Gibberellic acid (GA3) plays important role in promoting plant growth, and cell differentiation. This work was performed to investigate the relationship between lipooxidative damage marker (HEL) and bone damage induced by GA3 in adult albino rats. This study was carried out on 20 adult albino rats for 4 weeks treated 6 days/week. The rats were distributed into 2 groups of 10 rats each: Groups I (control) and II (GA3); each rat was treated by GA3 oral gavage (75 ppm) once daily. There was an increase in body and femur weights and length as compared to controls. GA3 caused a decrease in calcium and phosphorus levels in bone while calcium increased and the phosphorus decreased in the plasma. Lipid peroxidation markers caused high femur malondialdehyde levels with decrease in superoxide dismutase, catalase and glutathione peroxidase activities confirmed by histological changes. Immunohistochemical examination for expression of Nε-HEL in bone tissues showed strong positive brown reaction in GA3 treated group when compared with control group that showed negative reaction. GA3 toxicity induced bone damage in adult albino rats. It is recommended to increase public awareness regarding the health impact of gibberellic acid.

Gibberellic acids are plant growth regulators used in agriculture to stimulate growth and development of leaves and stems to increase the production of different crops (Ramwant and  Chakrabarty, 2017). In Egypt, gibberellic acid (GA3) is used widely to increase the growth of strawberries, grapes, tomatoes and cauliflower (Kamel et al., 2009). Occupational exposure to gibberellic acid may occur through inhalation of powder and dermal contact causing various disorders (Fetoui et al., 2006) in humans and experimental rats (Sripaiboonkij et al., 2016). Although, GA3 induces toxicity to mammalian organs, particularly on breast, bone, lung, kidney and liver (Ustun et al., 1992) of adult mice. Several studies demonstrated that GA3 is associated with cellular damage by oxidative stress and lipid per oxidation in many organs including heart, kidney, lung and bone of adult rats (Celik and Tuluce, 2007). Bone, rigid organ, may be vulnerable to oxidative stress decreasing bone formation and increasing bone desorption (Ramajayam et al., 2007). Gibberellic acids induce lipid per oxidation and by reactive oxygen species (ROS) production inducing its toxicity. Monitoring of oxidative damage biomarkers is very essential for estimating health impacts of its exposure and allow early prediction of its hazards. N-epsilon-Hexanoyl-lysine (HEL) is a novel lipid peroxidation biomarker, which isderived from the oxidation of omega-6 unsaturated fatty acid (Celik et al., 2007). The aim of this study is to determine the effect of GA3 on oxidation of lipids and to investigate the relationship between lipooxidative damage marker (HEL) and bone damage induced by GA3.

Gibberellic acid was purchased from Berelex®, BDH chemical, Pool, UK. It was provided in a white powder form. Distilled water was used as dissolvent to the gibberellic acid. Detection kit was also used. The monoclonal antibodies for the specific localization of N epsilon-(hexa- noyl) lysine (HEL) in frozen sections, as well as, in formalin fixed and paraffin embedded tissue were obtained from Medco Pharma Trade Egypt (Ab-4(6A7), Code no. (Ms-714-Po).
Animals
This study was carried on 20 adult albino rats, each weighing 150 g. The study was designed in the Faculty of Medicine, Zagazig University. All animals received care in compliance with the Animal Care Guidelines and Ethical Regulations in accordance with ''The Guide for the Care and Use of Laboratory Animals'' (Institute of Laboratory Animal Resources, 1996). In order to exclude misconceptions, the following environmental conditions were standardized according to Cuschieri and Backer (1977):
1) The climate in the animal house and in the cage with proper ventilation.
2) Low noise level was maintained as noise may affect the behavior of the animals.
3) The bedding, wood shaving was sufficient to absorb urine and also changed frequently to keep the animals clean.
Accordingly, the animals were kept in galvanized iron mesh cage with solid bottoms, which contained wood shaving as bedding, 10 rats per cage to avoid them been crowdy, also, isolation were avoided. The rats were kept in this environment for two weeks before starting experimentation to be adapted to any possible stress secondary to transportation procedure from the animal supplier or due to sudden environmental modification and exclude any diseased animal (Semler, 1992). The rats received balanced food, rich in all nutrients necessary to maintain their health before and during drug administration. Distilled water was offered ad libitum in separate clean containers.
Study design
This study was done 6 days/week for 4 weeks and the rats were randomly divided into 2 groups of 10 rats each:
1. Group I (control group): Each rat received only regular diet ad libitum and distilled water to determine the basic values of performance.
2. Group II (gibberellic acid (GA3) group): Each rat was gavaged orally with 75 ppm of GA3 once daily, 6 days/week for 4 weeks (Celik et al., 2007).
Methods
At the end of the 4th week of the study period, rats from each group were subjected to blood sample collection by means of capillary glass tubes from the retro-orbital plexus under light ether anesthesia as described by Nemzek et al. (2001). The animal was held in the left hand and grasped from the back, while enclosing the neck and exerting slight pressure by the thumb and index fingers. The blood samples were used for estimating the following tests:
Biochemical assays
Plasma calcium and phosphorus levels
Calcium and phosphorus levels were determined in femur and plasma using commercial reagents kits (Biaocon, 2004).
Malonyldialdehyde (MDA) level in bone
This was detected in the femur homogenates by the method of Draper and Hadley (1990) following the reaction of thiobarbituric acid (TBA) with malonyldialdehyde (MDA). The pink color produced was detected spectrophotometrically by ErbaChem 7.
Antioxidant enzyme activities
A) Catalase activity (CAT): This was detected following Aebi (1984) by adding the homogenate hydrogen superoxide (H2O2) with phosphate buffer; the changes in absorbance were recorded spectrophotometrically by ErbaChem 7.
B) Superoxide dismutase activity (SOD): this was estimated according to Beauchamp and Fridovich (1971) by adding potassium phosphate buffer, EDTA, L-methionine, riboflavin and nitro blue tetrazolium (NBT). Blue color in the reaction was measured spectrophotometrically by ErbaChem 7.
c) Glutathione peroxidase activity (GPx): This was detected following Flohe and Günzler (1984) procedure. The mixture of phosphate buffer, glutathione (GSH), sodium aside, and H2O2 and femur homogenates was prepared. Tubes were centrifuged and the supernatant was collected. The absorbance was recorded spectrophotometrically by ErbaChem 7.
D) Total glutathione level (GSH) in bone: This was determined by the method of Ellman (1959) measuring yellow colour when 5,5-dithio-bis-2 nitro benzoic acid (DTNB) was added with femur homogenate in phosphate buffer, then centrifuged. The absorbance was measured spectrophotometrically by ErbaChem 7.
Tissue sampling
The rats anesthetized by ether were sacrificed by transection of major blood vessels. The femurs were taken for histopathological study. All femur samples were weighed and divided into three pieces for:
1. Estimation of tissue oxidative stress markers (malonyldialdhyde and reduced glutathione)
2. Histopathological studies.
3. Immunohistochemical studies.
Histopathological study by H&E
The bone specimens were fixed in 10% neutral formalin. 5 μm thick paraffin sections were cut. The obtained sections were stained by Haematoxylin and Eosin (H&E) then examined by light microscope.
Immunohistochemical staining
The tissues were stained immunohistochemically with anti- HEL monoclonal antibody. Briefly, after deparaffinization, the sections were treated with 0.3% H2O2 in methanol for 30 min at room temperature, and with 0.1% trypsin for 15 min at 37°C. Then, the sections were reacted with HEL monoclonal antibody (Mouse monoclonal (HNEJ-2) to 4 Hydroxynonenal ab 485061:100) for 4°C overnight, followed by incubation with Dako En Vision/HRP system (Dako, Tokyo, Japan) for 30 min at room temperature. Sections were treated with DAB for 5 min, and counterstained with haematoxylin-eosin for 1 min with the sensitive universal immunostaining kit (Rommer et al., 2004).
Statistical analysis
Statistical significance among groups was determined using the Student’s t-test by arithmetical means7SEM.

Body weight, femur weight and length
There was significant increase in the weight of rats and femur length in GA3 group when compared with the control group. There was no significant difference between both groups in femur weight (Table 1).

Malonyldialdehyde (MDA) level in bone
There was significant increase of bone tissue (MDA) content in GA3 treated rats group when compared with the control group. (Table 3) 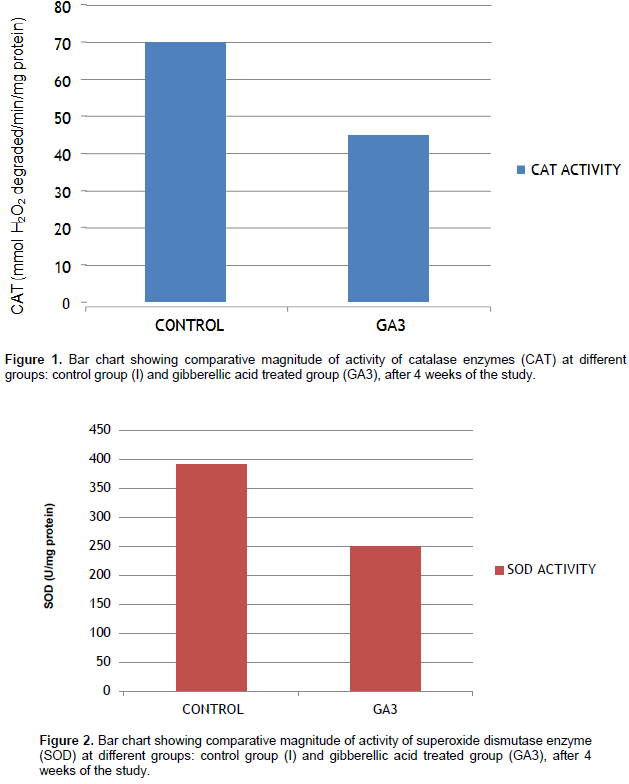 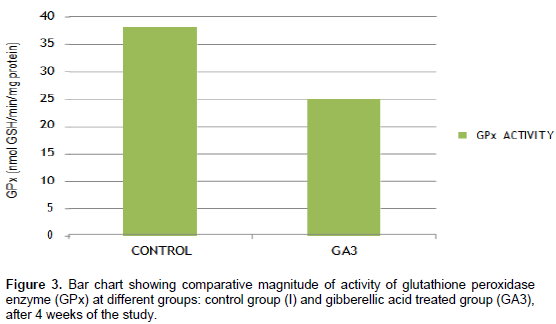 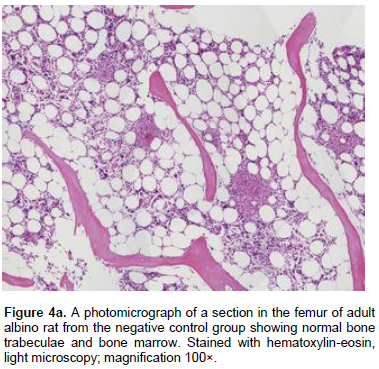 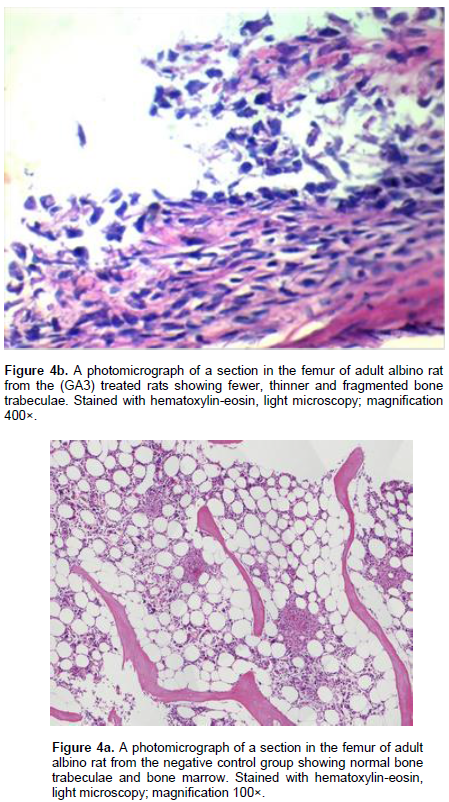 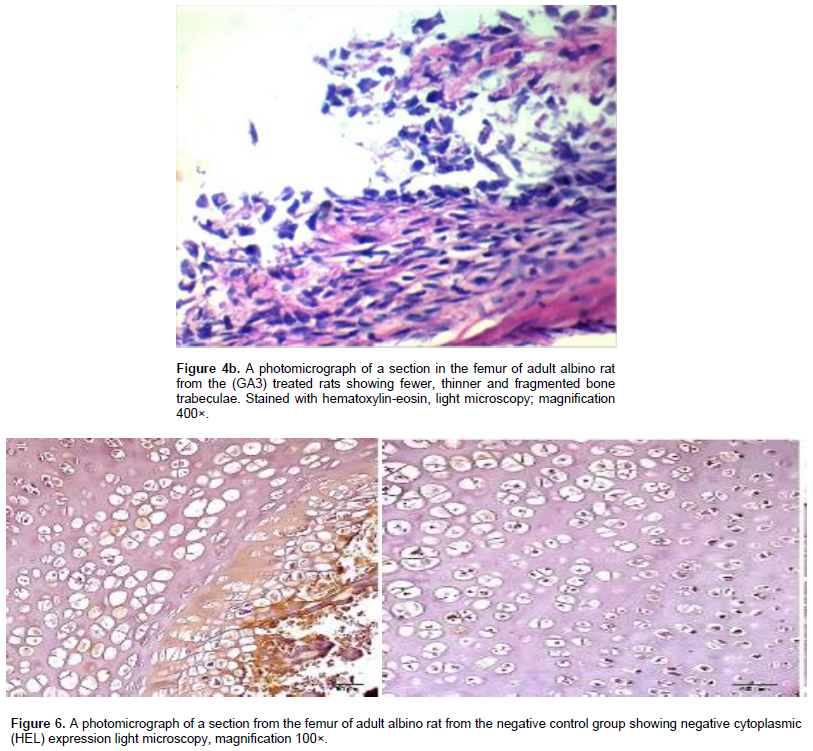 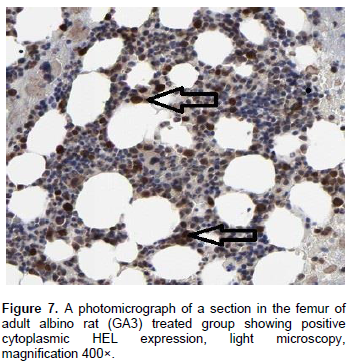 Many chemicals contaminate the environment and food including plant growth regulators with many adverse health effects especially bone mineral composition, development in human and rats (Ohn et al., 2017). A plant growth regulator induced reactive oxygen species damage in bone (Troudi et al., 2010). In the present study, there was increase in body weight and femur length as compared to the controls. These results are in agreement with those of Ross et al. (2011) who reported that gibberellic acid mechanism by which growth is promoted is guanylate cyclase activation, an enzyme stimulating tissue growth. As shown by Satarug et al. (2004), growth disturbance was due to an increase in food intake by rats. In this study, there was decrease in bone calcium with increase phosphorus, while there was increase in serum calcium with decrease in phosphorus mean values and decrease in bone (CAT, SOD and GPx) activity and increase in bone MDA level in GA3 treated group as compared to the control group. These results confirmed are by obvious  histopathological changes in the general architecture of the bone stained with H&E. Also, immunohistochemical staining for detection of HEL protein (apoptotic marker) in bone tissues appear as cytoplasm strong brown reaction. These data are according to Mahijoubi et al. (2005) who detected a disturbed calcium and phosphorus of GA3 treated rats due to the formation of oxygen free radicals in the femur. Indeed, previous studies showed that the production of free radicals such as H2O2 or xanthine oxidase generated superoxide anions which was able to impair osteoblastic maturation in mice (Mody et al., 2001) and marrow cells in rabbits (Bai et al., 2004). Nevertheless, these superoxide anions were found to stimulate osteoclast differentiation and bone resorption (Ha et al., 2004; Lean et al., 2004).
These results are also supported by Yavas et al. (2017) who stated that the accumulation of significant amounts of GA3 was previously demonstrated by others in soft tissues like kidney, liver and brain of mice with damaging effect on the antioxidant capacity of reducing glutathione (GSH), glutathione reductase (GR), superoxide dismutase (SOD), glutathione-S-transferase (GST) and catalase (CAT) activities and increase in lipid per oxidation marker level (MDA). This result agree with the data provided by Abou-Eisha (2001) who showed that gibberellic acid induced a dose-dependent increase in the level of DNA breakage in human blood cells. Martinez et al. (2017) reported that the mechanism of gibberellic acid induction of DNA damage may be attribute to elevation of oxidative stress markers such as ROS and GSH, Bcl-2 protein expression, mitochondrial membrane potential and caspase-3 activity. In general, oxidative stress attenuates antioxidant defense system (Ceconi et al., 2003). In this study, the lipid per oxidation marker (MDA) increased in femur of GA3 treated rats. These results are in agreement with Ha et al. (2004), Biaocon (2004) and Hassab-Elnabi and Sallam (2002) who reported an increase of MDA in liver and several tissues like kidney, heart, spleen and lungs in GA3-treated adult rats. In this study, intense accumulation of Nε-HEL expression in the femur was observed in GA3 exposed rats. The sequel of the release of reactive oxygen species led to mitochondrial membrane depolarization and caspase-3 activation followed by apoptosis (Abou-Eisha, 2001). The formation of Nε-HEL has been shown to be a good marker for oxidative stress. In particular, the hydroxyl radical is highly reactive among oxygen radicals. Once excessive hydroxyl radicals cause changes in the fluidity and permeability of membranes, it induces the immunostaining intensity of Nε-HEL in lung, bone and heart tissues of rat, showing tendency to increase after gibberellic acid exposure (Ichiseki et al., 2011).

Improvement of health educational programs for the purpose of increasing public awareness regarding the health impact of gibberellic acid producing oxidative stress and DNA damage on different body organs is recommended. Its use as plant growth regulator with alternative less hazardous chemicals is recommended.