This study aimed to assess the correlation of serum lactate and creatine phosphokinase (CPK) levels, and their association with severity of organophosphrus poisoning in order to use one of them or both as tools in predicting prognosis. This study was conducted over one year and 68 organophosphate (OP)-poisoned patients were enrolled. Clinical severity of cases was categorized according to Peradeniya organophosphorus poisoning (POP) scale. Levels of serum acetyl choline esterase (AChE), serum CPK and serum lactate were measured on admission (0 h), 6 and 24 h post-ingestion. The results showed a high statistically significant difference between cases and control regarding AChE, CPK and lactate on admission. Also, there was high statistically significant difference regarding AChE, CPK and lactate among different categories of cases on admission, 6 and 24 h post admission. In addition, there was a statistically significant increase among different categories of POP scale regarding the quantity of atropine used in management of cases. Regarding oximes and stay in ICU, there was a statistically significant increase in severe poisoned patients when compared with moderate poisoned ones. A significant negative correlation was observed between AChE and severity of poisoning as well as significant positive correlation between CPK and lactate. It is concluded that serum CPK and serum lactate can be used as predictor of outcomes in OP poisoning and helps in determining cases that need follow up. Serum CPK and serum lactate can be used as predictors of outcomes in OP poisoning and helping in determining the cases that need follow up.

The World Health Organization (WHO) estimates the incidence of pesticide poisoning to be three million  cases per year, leading to more than 250,000 deaths annually (WHO, 2016).  Organophosphate (OP) poisoning  is considered to be a frequent reason for admission in hospitals and intensive care units (ICU) in developing countries (Senarathna et al., 2012).
Organophosphate (OP) insecticides are a group of insecticides acting on the enzyme, acetylcholinesterase (AChE). They irreversibly inactivate this enzyme which is essential for nerve function in insects, humans and many other animals. They also affect this enzyme in variable ways, contributing to their potential for poisoning (International Programme on Chemical Safety, 2016).  Clinical features of OP are attributed to specific effects on muscarinic, nicotinic and central nervous system (CNS) receptors. This can result in diverse symptoms and signs (Peter and Cherian, 2000) depending on amount used and route of exposure (Eddleston et al., 2008). The common mode of presentation includes CNS symptoms which may include anxiety, confusion, seizures and coma. The muscarinic effects include diaphoresis, diarrhea, gastrointestinal cramps, urination, miosis, blurred vision, bradycardia, bronchorrhea, bronchospasm, emesis, lacrimation and excessive salivation. Other muscarinic effects may include muscle fatigue, fasciculation, paralysis, respiratory muscle weakness, tachycardia and hypertension. Nicotinic features include fasciculation, paresis or paralysis (Sen et al., 2014). Cardiac arrhythmias, including heart block and QTc prolongation, are occasionally observed in OP agents poisoning (Wang et al., 1998). Late onset polyneuropathy can also occur following OP poisoning (Aygun et al., 2003; Genel et al., 2003).
The inhibition of AChE is the main mechanism of cholinergic crisis, leading to stimulation of both muscarinic and nicotinic receptors. Muscarinic effects include excessive salivation, lacrimation, urination, diarrhea, gastrointestinal cramps, vomiting, pupil constriction, blurred vision, bradycardia, as well as wheezes. Nicotinic manifestations include fasciculation and paralysis (Sen et al., 2014).     Peradeniya organophosphorus poisoning (POP) is a simple scale used to assess the severity of poisoning based on the symptoms at presentation. Patients with a high score on the POP scale have a high rate of morbidity and mortality (Senanayake et al., 1993).
Elevation of lactate level is not clearly defined but most studies use range between 2.0 and 2.5 mmol/L (Kruse et al., 2011) whereas, “high” lactate has been defined to be more than 4 mmol/L in many studies (Howell et al., 2007; Cox et al., 2012; Shapiro et al., 2005; Callaway et al., 2009). On the other hand, the “normal value” may vary depending on the assay used. The terms lactate and lactic acid are often used mutually but lactate (the component measured in blood) is strictly a weak base while lactic acid is the corresponding acid. “Lactic acidosis” is oftentimes used clinically to describe the elevation of lactate level but should be reserved for cases where there is acidosis pH < 7.35 (Luft et al., 1983).
Creatine phosphokinase (CPK) is an enzyme present in different tissues and cells. It catalyses the conversion of creatine and utilizes adenosine triphosphate (ATP) to create phosphocreatine (PCr) and adenosine diphosphate (ADP). It is checked in blood tests not only as a marker of damage of CK-rictissue especially skeletal muscle, but also brain, photoreceptor cells of the retina, hair cells of the inner ear, spermatozoa and smooth muscle (Wallimann and Hemmer, 1994). Agarwal et al. (2007) reported elevated level of CPK in serum of poisoning patients and for this reason, it may be used as a biomarker of OP poisoning.
Lactate levels are often used as alternative indicator for severity of illness severity and to measure response to therapy. Many medications and toxins are associated with elevated lactate (Reade et al., 2012). Patients with elevated lactate levels may be at higher risk for significant morbidity and mortality, and need a systematic approach for both diagnosis and treatment (Andersen et al., 2013).
Although, till now, few researches have shown that serum cholinesterase (ChE) and CPK level estimations are useful in diagnosis of acute phase OP poisoning, they do not show any relation of these biomarkers to the severity of OP poisoning (Goswamy et al., 1994; Aygun, 2002). Therefore, this study aimed to assess the correlation between serum lactate and CPK levels and their association with the severity of OP poisoning, hoping to use these markers as predictors of OP severity, as AChE is a diagnostic tool but these are prognostic more than diagnostic; furthermore, their availability and cheapness is more than that of AChE in developing countries. 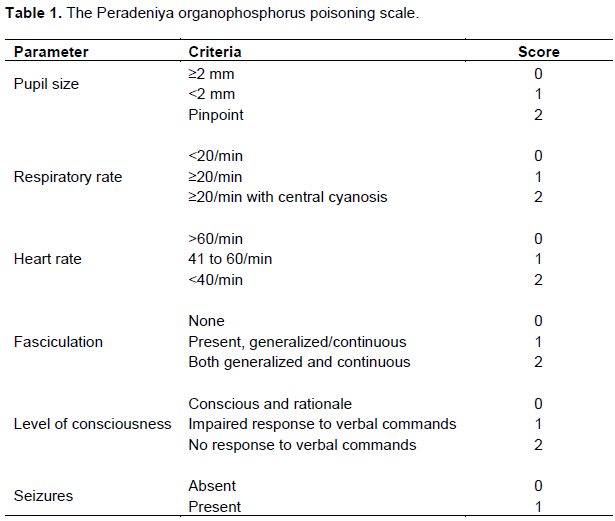 Exclusion and inclusion criteria
Patients who were presented later than 6 h of poisoning and those having diabetes mellitus, thyroid disease, chronic heart diseases and hepatic or renal failure, as well as patients subjected to cholinergic or sympatholytic drugs or any other medications for chronic disease were excluded. According to these exclusion criteria, only 68 OP-poisoned patients were  enrolled  in  this  study.
They were (35) males and (33) females, with mean age of 26.5 ± 2.3 years, presented within 6 h from the exposure to OP compound and had most of the previous clinical findings mentioned previously.  All patients received airway control, decontamination, O2 therapy and administration of antidotes; atropine and pralidoxime and other routine treatment. Seventy healthy individuals (age- and sex-matched) served as a control group. Informed consents from all patients and approval letter from the Ethical Committee for Research (Institutional Review Board ‘IRB’), Faculty of Medicine, Zagazig University were obtained.
On admission to the emergency department (0th h) and at 6th and 24th h after admission, 5 ml of venous sample was collected from study participants. The blood samples were centrifuged at 3000 rpm for 10 min and serum was collected. Measurements of serum acetyl cholinesterase (AChE), CPK and lactate levels were performed and correlated with the severity of poisoning according to POP scale. The required treatments including atropine and oximes for management as well as duration of hospital stay were determined.
Biochemical analysis
Determination of serum acetyl cholinesterase
Serum acetylcholinesterase (AChE) activity was determined colorimetrically according to the method of Ellman et al. (1961). The reaction was done twice for each sample in the same time. Briefly, 4 ml solution containing 4 mM tris buffer (pH = 7.4), 40 mM MgCl2, 0.1 mM × 10-4 M DTNB (colouring reagent), and 0.2 mM × 10-4 M of S-butyrylthiocholine iodide (substrate) were pre-incubated at 37°C for 10 min with coupling. 20 μl of plasma samples was added into each tube of  the  aforementioned  substrate  solution.  The  mixture was vortexed and absorbances of produced yellow colour were read spectrophotometrically at 1 min interval for 3 min at 412 nm. Blank was run parallel to each sample without addition of substrate. Activity was expressed as U/l.
Determination of serum creatine phosphokinase (CPK)
Kinetic determination of CPK is based upon the fact that it catalyses the reversible transfer of a phosphate group from phosphocreatine to ADP. This reaction is coupled to those catalyzed by hexokinase (HK) and glucose-6-phosphate dehydrogenase (G6P-DH). The rate of NADPH formation can be measured photometrically, and proportional to the catalytic concentration of CK present in the sample (Gerhardt and Waldenström, 1979). The reaction was performed by addition of 40 µl serum to 1 ml of the working reagent by mixing and incubation for 2 min. Absorbances were read at 1 min intervals, thereafter for 3 min. The difference between absorbances and the average absorbance differences per min were calculated.
Determination of serum lactate
Lactate is oxidized to pyruvate and hydrogen peroxide (H2O2) by lactate oxidase (LOX). In the presence of peroxidase (POD), hydrogen peroxide reacts with 2,4,6-tribromo-3-hydroxybenzoic acid (THB) and 4-aminoantipyrine (4-AAP) to form a red quinoneimine dye. Serum L–lactate level can be measured colorimetrically where lactate is oxidized to lactate oxidase (LOX) to generate pyruvate and hydrogen peroxide (H2O2) which then interacts with 2,4,6-tribromo-3-hydroxybenzoic acid (THB) and 4-aminoantipyrine (4-AAP) in the  presence  of  peroxidase  (POD)  to form a red quinoneimine dye. The color intensity of the former red dye is directly proportional to the lactate concentration and can be determined by measuring the increase in absorbance at 546 nm. The reaction was carried out by mixing 10 µl of serum with 1 ml of the working reagent. The mixture was then incubated for 5 min at 37°C (Field et al., 1996).
Statistical analysis
The collected data were statistically analyzed using SPSS program version 15. Quantitative data were summarized as mean + standard deviation (X + SD). Qualitative data were summarized as percentage. Test of significance for qualitative data was X2 (chi-square) test. Test of significance for quantitative data was done using ANOA and student t tests for comparison between groups’ means. Pearson test was used to evaluate the correlation between two variables. Logistic regression analysis was performed to determine the independent predictors of variables. The significance level was considered at p value < 0.05. 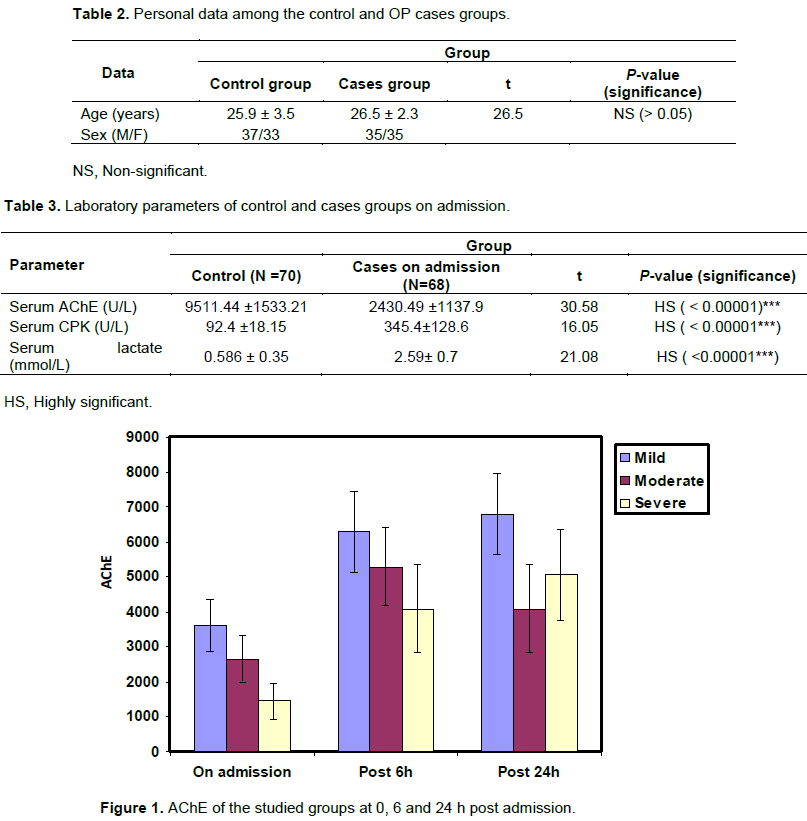 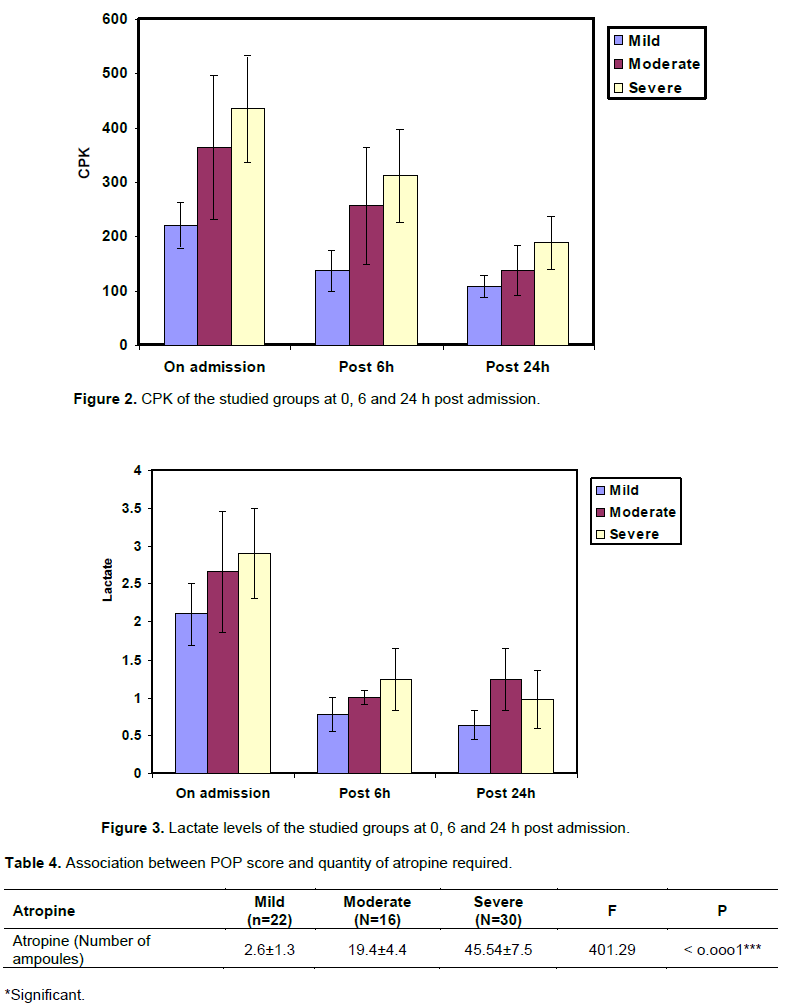 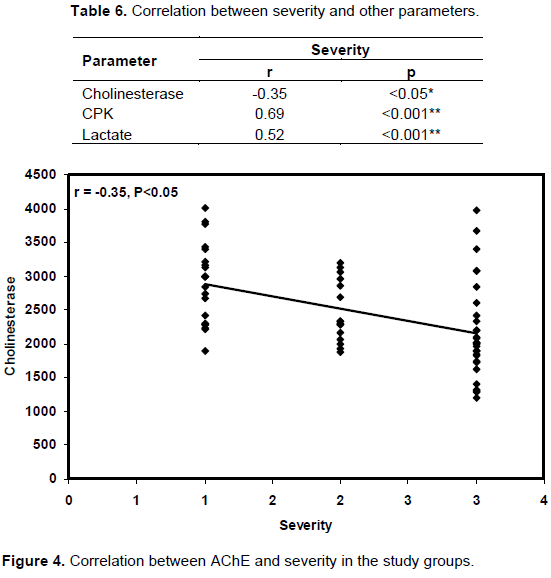 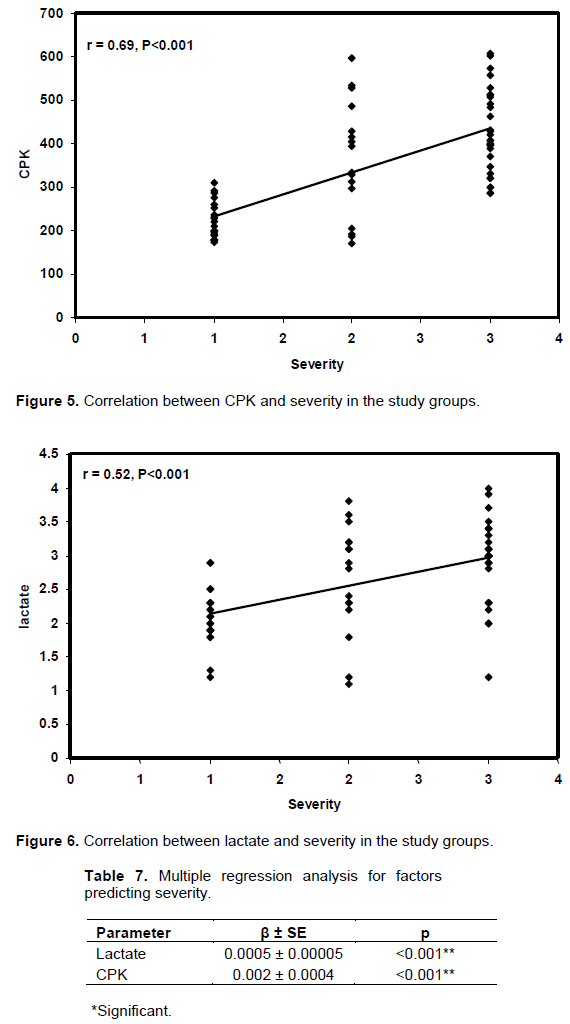 Serum CPK activity and lactate levels can be used as biomarkers in stratifying severity of acute OP poisoning, as they are cheap, easily available, especially in developing countries where EChE and BChE are not widely available in most of the laboratories. Also, serum cholinesterase levels have no prognostic value in acute organophosphate poisoning. Thus, a grading system to identify high-risk patients based on this measurement is most likely unreliable.The only disadvantage in using CPK activity and serum lactate level as predictors is that, the other causes of their elevation is strictly ruled out.

One of the limitations in the present study is that serial measurements were not done. To substantiate the findings, more multicentric studies with larger sample size has to be conducted.