Occupational and environmental exposures to toxic metals such as lead (Pb) have been reported to induce certain alterations in various sperm parameters and endocrine profile (Sallmen, 2001; Vigeh et al., 2011).

Significant number of workers are exposed to lead in many industries through motor vehicle assembly, panel beating and painting, battery manufacturing, printing, smelting and mining (Hanan et al., 2016). The route of exposure include inhalation, ingestion and dermal. The absorbed lead is mainly stored in bones, soft tissues and to lesser extent in the erythrocytes; once in the system, it exert many health consequences in all of the body organs (Mohammed et al., 2016). These include neurotoxicity (Mason et al., 2014; Chakrabarty et al., 2014), hepatotoxicity (Bharali, 2013), hematotoxicity (Ercal et al., 2001; Sharma et al., 2011) and cardiotoxicity (Sadeghniat et al., 2013).

The study was conducted in environmental lead exposed areas of Bagega and Kawaye located at the coordinates (005° 39.749Ê¹ E, 11° 51. 858Ê¹ N and 006° 01. 754Ê¹ E, 11° 48. 719 N) of Anka local Government Area of Zamfara State, Northwestern, Nigeria. The exposure is connected to the prevalent and persistent illegal gold mining in the area which is confirmed to contain high percentage  of lead as impurity (Lar et al., 2014). Forty male individuals with high blood lead levels (>76 µg/dl) and with no history of infertility or had any hormonal therapy were recruited in the study. The study enrolled another twenty male individuals (matched by age with the study subjects), from Kadauri village of Maru local Government Area of the same State who were apparently healthy, with undetected blood lead level or not exposed to any substance known to influence any variable of the study. A consent form was administered, filled and signed after which a questionnaire was also administered to obtain demographic data. After obtaining their consent, a ten milliliters (10 ml) of a venous blood sample was collected from each participant (test and control groups) under aseptic condition into a plain test tubes for lead determination, antioxidant enzymes assay (serum superoxide dismutase [SOD], CAT and GPx), lipid peroxide level (MDA) and hormonal assay (LH, FSH and Testosterone) after centrifuging, serum was collected and stored in freezer (-20°C) until the time for analyses. The study was granted approval by the Zamfara State Ministry of Health Committee on Human Research.

Serum lead determination was carried out using Atomic Absorption Spectrophotometer (AAS Perkin Elmer, 6300 model USA). Wet digestion was carried out on the serum samples, 1.0 ml of blood was transferred into test tube and 2.0 ml concentrated (HN03) was added slowly and heated at 130°C until yellow fumes disappear. The test tube was allowed to cool, made to 5 ml with deionized water and stored until analyses.

The demographic data of the study subjects is shown in Table 1. All the subjects analyzed were within the reproductive age group (15-45 years). The lead exposed subjects  had  mean  blood  lead level  (BLLs) of 208.72 ± 19.89 µg/dl. The mean ages of lead exposed and control subjects were 36.17 ± 0.86 and 35.13 ± 0.79, respectively. Investigation of their educational status indicated that 78% of the lead exposed subjects had formal education and 90% for control subjects. Majority (80%) of the subjects were exposed to lead through artisanal mining as their major source of livelihood. 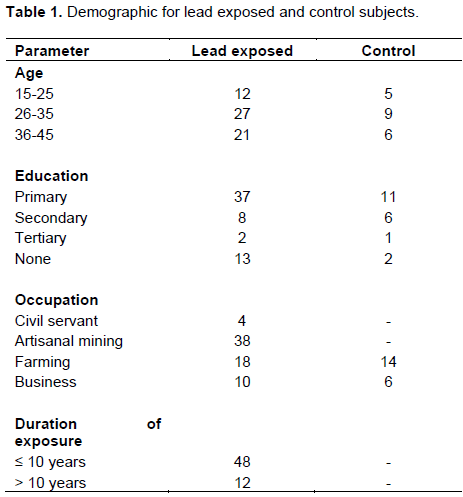 The correlation between hormones (LH, FSH and Testosterone) and blood lead levels of lead exposed individuals is shown in Table 5. All the hormones analyzed demonstrated negative relationship to blood lead levels, though, not quite significant.

Occupational and environmental exposures to toxic metal lead have been implicated to reduce sperm functional indices and male reproductive hormone. Reports from both experimental and epidemiological studies (Sallmen, 2001; Al-Juboori et al., 2013) have indicated that high levels of lead (>40 µg/dl) induces generation of reactive oxygen species (ROS) that invariable disrupt antioxidant/oxidant balance. Moreover, progressive generation of these free radicals can equally affect both spermatogenesis and reproductive hormones (Benoff et al., 2000; Darbandi et al., 2018). In the present study, effect of environmental exposure to lead on antioxidant enzymes activities, lipid peroxide levels and reproductive hormones concentration was assessed in both lead-exposed and control subjects. The study recruited eighty individuals made up of forty lead-exposed and twenty control subjects with mean age of 36.17 ± 0.86 and 35.13 ± 0.79, respectively (Table 1). Indeed, both the test and control subjects are within the reproductive age group thus formed a good base for comparison. The lead-exposed subjects had high mean blood levels of 208.72 ± 19.89 µg/dl which is far above US center for disease control and prevention (CDC) limit of 10 µg/dl. This shows that the subjects under study have been exposed to lead through gold mining activities over time.

The activities of antioxidant enzymes decreased significantly in lead-exposed subjects compared to the control subjects while the mean serum concentration of MDA increased significantly in lead-exposed subjects compared to the control subjects (Table 2). Superoxide dismutase (SOD) and catalase are enzymatic antioxidants which scavenge the superoxide anion (O2-2) and peroxide (H2O2) radicals by converting them into water and oxygen. Both SOD and CAT are present within both sperm and seminal plasma (Zini et al., 2000). The high concentration of MDA in lead-exposed subjects indicated that there is element of oxidative damage which supported by decreased antioxidants enzymes activities. In fact, this can expose the sperm cell to oxidative onslaught which might have detrimental effect on sperm quality (Ghosh et al., 2002). The findings of this study are similar to that of Alkan et al. (1997), Sanocka et al. (2003) and Ghosh et al. (2002) conducted in infertile men. Similarly, some studies conducted in infertile women show similar reduction of antioxidant enzymes activities (Veena et al., 2008; Majid et al., 2013; Rajeshway et al., 2016; Panti et al., 2018).

Human and animal studies have indicated the effect of exposure to lead on reproductive hormones. The results of this study revealed significant increase in LH and FSH in lead-exposed subjects compared to the control subjects (Table 3) and are consistent with the results reported by Ng et al. (1991), Ronis et al. (1996) and Grattan et al. (1996). There was no significant difference in testosterone concentrations in both lead-exposed and control subjects. Some studies reported increased serum concentration of testosterone in men exposed to lead (Gustafson et al., 1989; Telisman et al., 2007). High serum concentration of LH and FSH are usually associated with normal testosterone concentrations in acute lead-exposed subjects and literature has indicated that systemic hormones such as LH, FSH and testosterone may play an antioxidant role to safeguard sperm and other testicular cells from oxidative damage induced by toxic metal lead (Chainy et al., 1997; Meucci et al., 2003; Shang et al., 2004; Mancini et al., 2008).

Correlation between antioxidant parameters and blood lead levels is shown in Table 4 and there was no establish significant relationship between the blood lead levels and antioxidant enzymes. Though, there was slight increase activity of those enzymes which could be due to an adaptive mechanism of the antioxidant defense system in response to lead-induced oxidative stress.

Significant positive relationship was observed between blood lead levels and MDA. This clearly indicates to some extent, the degree of lipid peroxidation.

The study showed that environmental exposure to lead could induce generation of reactive oxygen species which eventually decreased the activity of antioxidant enzymes known to protect the integrity of cells (including sperm cells) from oxidative onslaught. Lead-induced oxidative stress could as well affect the hypothalamic-pituitary-testosterone axis. Antioxidant enzymes, sex hormones and lipid peroxidation are affected as blood lead levels raise. Therefore, environmental exposure to lead may result to unexplained male infertility.