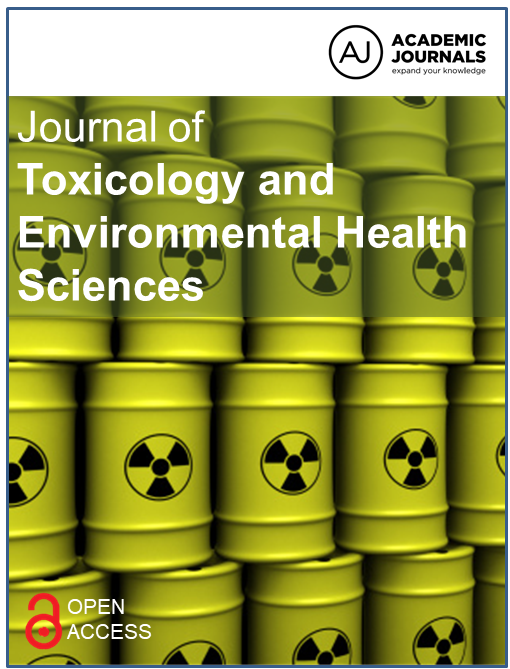 Micronuclei, nucleoplasmic bridges and nuclear buds are biomarkers of genotoxic events and chromosomal instability. In laboratory, these genome damages can be measured easily. The measurement of cytogenetic alterations in-vivo has considered an initial step in the risk assessment procedures by genotoxic agents. In fishes, micronucleus assay has shown useful in vivo techniques for genotoxicity testing, and potential for in situ monitoring of water quality. This paper evaluates the genotoxic effects of fungicide in fish erythrocytes, with emphasis on the induction of micronuclei formation. The binucleate/mononucleate cells ratio in peripheral erythrocytes exposed to propiconazole (1.11 and 2.23 mg/L) has also been used to evaluate the time-dependent response. Micronucleus frequencies induced by fungicide is significantly greater than their respective control (p < 0.05) for the fish species Clarias batrachus throughout all treatment periods. This paper is directed to assisting laboratories in the development of micronucleus test for assays of genotoxic potential of chemicals.

Propiconazole (PCZ) is a trizole group fungicides which was introduced in mid 1970s classified as category III and IV. Trizole containing fungicides have been used as an antifungal in agriculture for controling pest and also for increasing food crops (Vanden Bossche et al., 1989; Warmerdam, 2008). Trizole, belonging to demethylation inhibitors (DMI) group with rapid acropetal systemicity acts on the pathogen inside the plant to stop disease development by interfering with sterol biosynthesis in fungal cell membrane. The trizole fungicides inhibit one specific enzyme C14-demethylase, which plays a role in sterol production. It has a shorter half-life and lower bioaccumulation, but announcing effects on the aquatic ecosystems may arise from spray drift or surface run-off (Konwick et al., 2006). It has been reported that it undergoes transformation of secondary metabolites in terrestrial mammals (Chen et al., 2008). Series of studies show that the trizole fungicides alter the metabolic pathways, cell signaling, cell growth pathways, cell cycle genes and other transcriptional factors (Bruno et al., 2009; Nesnow et al., 2009; Li et al., 2010). In body tissues, it metabolite into  1,2,4 tizole, trizole alanine, trizole acetic acids, trizole pyruvic acid and trizole lactic acid. Of these metabolites,1,2,4 trizole and trizole alanine are the main metabolites which have toxic effects. 1,2,4 trizole is an isomeric chemical compound which have 5-membered ring of 2 C-atom and 3 N-atom. Due to the presence of lone pair electron on N2-atom, it has specific toxicity. Therefore, because of its widespread use, toxicity evaluations have been performed in this studies.

In aquatic organisms, the micronucleus test (MNT) is one of the most applicable techniques for identifying the genomic alterations. This assay targets interphase cells of any proliferating cell population regardless of its karyotype. In environmental biomonitoring programme, this technique has been adapting because of its simplicity. The purpose of this paper is to know, whether the used fungicide has genotoxic property or not in reference to aquatic organisms.

There are several events of formation of micronuclei (MN) and other nuclear lesions in blood such as frag-ments caused by mis-repair of DNA breaks or unrepaired DNA breaks or mal-segregation of whole chromosomes at anaphase, hypo-methylation of repeat sequences in centromeric and peri-centromeric DNA, defects in kinetochore proteins or assembly, dysfunctional spindle and defective anaphase checkpoint genes, dysfunction in the error frees homologous recombination DNA repair pathways and defect in enzymes of non-homologous end joining pathways in organisms (Fenech, 2007; Fenech and Crott, 2002; O’Donovan and Livingston, 2010; Srivastava and Singh, 2014).

Other important mechanisms, which induce MN for-mation in blood of acentric fragments, include simul-taneous excision repair of damage or inappropriate base incorporated in complementary DNA strands (e.g., uracil) (Fenech and Crott, 2002).

Irrespective of the aforementioned reports, the reason-able mechanisms that lead to MN formation is not yet complete. In genomics, the specific gene expression patterns responsible with the formation of MN, is still rudimentary (Iarmarcovai et al., 2008). In the present study, the formations of MN frequencies have been studied with the exposure of fungicide, PCZ.

PCZ (CAS No. 60207-90-1) has been purchased from Syngenta Ltd. from India, a technical grade pesticide. Other chemicals such as Giemsa stain has been purchased from Indian market. Fresh-water fish Clarias batrachus were obtained from local hatchery (Chhappy Hatchery). Fish had an average weight of 40.01 g and average length 17.26 cm. Fish were fed with commercial fish food, and acclimatized under laboratory conditions for 2 weeks, containing de-chorinated tap water (pH = 7.6 alkalinity, 150 mg/L CaCO3, dissolve oxygen (DO) = 7.03 mg/L, temperature = 22°C). The photoperiod used 12 h/12 h dark/light. Aquaria used in study was made of glass and had constant aeration. Physical dimensions of aquarium had 100×40×40 cm, and a 120 L capacity.

Blood smear slides were prepare by the method of Das and Nanda (1986) with some modifications. Peripheral blood samples were obtained from caudal vein of fish from 24, 48, 72 and 96 h. Blood smears were prepared from each group of randomly selected fishes. At each assessment, 2500 cell/fish were analyzed (7500 erythrocytes for each group). Slides just dried in air, fixed in absolute methanol for 10 to 15 min, and stained in Giemsa (pH 7.0) for 1 to 2 h. The average frequencies of abnormalities were determined for each group as presented in Table 1. MN frequencies (MN‰) were calculated as follows:

Then the mean ± standard error for each group was calculated. Student’s t-test was employed for comparison of control and experimental animals (Sokal and Rohlf, 1973). 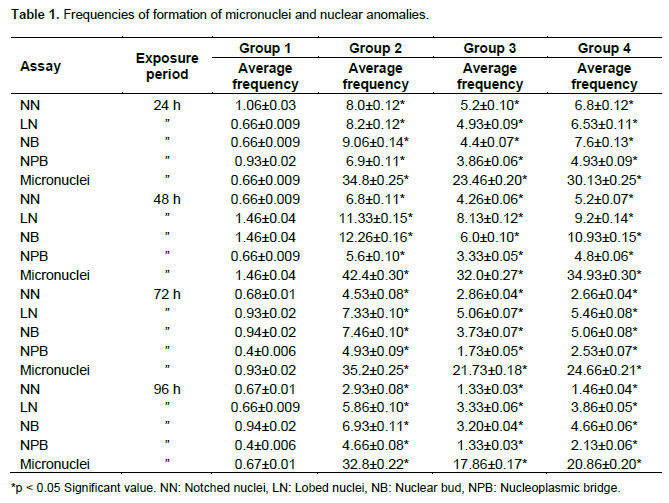 The results of micronucleus and nuclear abnormalities in peripheral erythrocytes of C. batrachus is as shown in Table 1 and Figure 1. In both groups which were receiving fungicide as well as in the positive control group, frequencies of MN and other nuclear abnormalities were observed significantly higher p<0.05 when compared with negative control group. In Group 3, which was receiving 1.11 mg/L PCZ, increased frequencies of MN were found in erythrocyte after 48 h in comparison to 24, 72 and 96 h with respect to negative control. Group 4, receiving 2.23 mg/L, showed the same results in all periods, but the frequencies of MN and other nuclear anomalies were higher than Group 3 fishes. In positive control group, the results were also similar. In both Groups 3 and 4 and also in positive control, the frequencies of lobbed nuclei (LN), notched nuclei (NN), nuclear buds (NB) and nucleoplasmic bridge (NPB) were found to significantly increased after 24 and 48 h. NN and NPB increased after 24 and LN and NB increased after 48 h (Table 1). 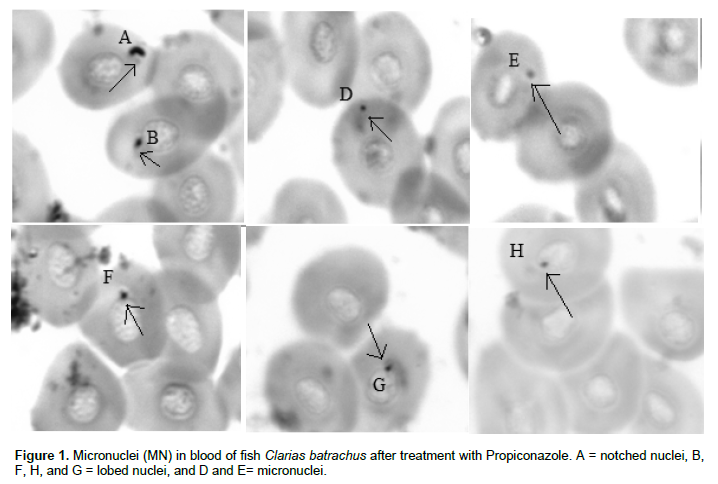 The results of the present study show the induction of MN and other nuclear anomalies in peripheral erythrocytes of C. batrachus when exposed to different concentrations of fungicide PCZ. PCZ is a trizole group fungicide. It has 1H-1,2,4-trizole group at 4-position, 1,3-dioxolane moiety and an aryloxymethyl group and also nitrogen containing hetero-aromatic ring. In blood and tissue, it metabolites into 1, 2,4-trizole alanine, is the main metabolite of trizole containing fungicides. Metabolites of trizole also produce many N2-containing substances that might be affected on enzymes activity and also nucleic acids (Srivastava and Singh, 2013).

Increasing concentration of nitrogenous metabolites in blood affects the series of enzymatic systems in fish and induces the formation of reactive oxygen species (ROS). Production of reactive intermediates such as ROS, are highly toxic cause DNA lesion in fish blood (Pandey et al., 2011). DNA lesion can be different in shape and size such as in bud form (attached to the main nucleus), lobed form (evagination of nuclear membrane), or in bridge form, however, each anomalies are the signal of cytogenetic damages in fish that could be resulted with failures in cell division, cell death process with muta-genecity (Bombail et al., 2001; Pachecco and Santos, 2002).

After different exposures of fungicide, the formation of MN, NB, NPB and other anomalies were observed. It has been suggested that gene amplification via the breakage-fusion-bridge cycle could cause formation of nuclear anomalies during the elimination of amplified DNA from the nucleus (Shimizu et al., 1998). Abnormal cell division due to the blocking of cytokinesis can also cause binucleation that may lead genetic imbalance in the blood (Rodilla, 1993). Formation of these anomalies in fish blood clearly indicate that PCZ has high genotoxic potency and insight of socio-economic purpose; it is very harmful for aquatic ecosystem. However, the well-documented and reasonable significant associations with an increase in the occurrence of MN and exposure periods are still unknown (Bolognesi et al., 2006). Although the significant increases in erythrocyte MN in fish after 48 h was recorded, whereas some workers have demonstrated the increased frequencies of MN at 72 h. These variations may also be a direct consequence of the sensitivity behavior and the niche of the species, as the number of MN in the cells of fish may be variable (Graziela et al., 2010). Due to chemical pollutants, the low amount of DNA per cell, the large numbers of small chromosomes and the low mitotic activity in many fish species impaired the metaphase analysis of chromo-somal damage and sister chromatid exchanges are demonstrated (Pavlica et al., 2000).

It is evident that multiple mechanisms can lead to the formation of MN. MN frequency provides a useful index of accumulated genetic damage during the lifespan of the cells. MN expression strongly depends on the mitotic activity in the studied tissue, which in  turn  depends  on a complex interaction of biotic and environmental parameters such as temperature, salinity and food availability. The MN frequencies in blood evaluate the kinetics of cytogenetic alterations under fungicides influence. So based on the present study, it was concluded that the fungicide PCZ has great potential to alter the DNA model. Therefore, the extensive use of these fungicides in field crop and its surface run-off at near water bodies should be avoided.