Cyclophosphamide is an alkylating agent having antineoplastic activity and immunosuppressive properties in many conditions like organ transplantation and systemic  lupus  erythematosus   (Nagler   et   al.,  2013).

Cardiotoxicity associated with high-dose cyclophosphamide has been described as a complication of several therapeutic regimens (Kamezaki et al., 2005) and the incidence of fatal cardiomyopathy varies from 2.0 to 17.0%, depending on the different regimens and patient populations (Taniguchi, 2005). It has been suggested that in order to benefit from the cyclophosphamide at higher doses, a protective agent was needed that would eliminate the toxic side effects of cyclophosphamide. Plasma antioxidant concentration has shown a decrease of patients who had a high dose chemotheraphy (Sabuncuoglu and Ozgunes, 2011).

Numerous studies had shown that cyclophosphamide exposure enhances intracellular reactive oxygen species (ROS) production, suggesting that biochemical and physiological side effects may result from its oxidative stress (Manda and Bhatia, 2003). Zingiber officinale (ginger), family Zingiberaceae is obtained from the underground stems or rhizomes of Zingiber. It is consumed as a fresh paste, dried powder, slices preserved in syrup, or candy or for flavoring tea. The underground stem or rhizome of this plant has been used as a medicine in Asian, Indian and Arabic herbal traditions since ancient times (Altman and Marcussen, 2001). It has been used in herbal medicine practice for the treatment of arthritis, rheumatologic conditions and muscular discomfort. Also, it has also been suggested for the treatment of various other conditions, including atherosclerosis, migraine headaches, rheumatoid arthritis, high cholesterol, ulcers, depression, and impotence. In addition to these medicinal uses, ginger continues to be valued around the world as an important cooking spice and is believed to help against common cold, flu-like symptoms, and even painful menstrual periods (Grant and Lutz, 2000). Its root contain polyphenol compounds (6-gingerol and shogaol), which have a high antioxidant activity (Stoilova et al., 2007). We aimed to investigate the possible beneï¬cial protective effect of Z. officinale extract on cyclophosphamide induced cardiotoxicity in adult male albino rats.

Fresh ginger rhizomes (400 gm) were divided, macerated and saturated with cold methanol (2 L) .The extract was filtered and subjected to drying. The residues were re-extracted for 3 times. The dried extract was dissolved in least amount of methanol (50 mL) and distilled water H2O was added, then fractionation was done by ethyl acetate using separating funnel at room temperature. Z. officinale ethyl acetate extract  was evaporated to dryness under reduced pressure at 40°C using rotatory evaporator (Hei- VAP Value Digital, Germany) (Lakshmi and Sudhakar, 2010).

The experimental animals were randomly divided into five equal groups each of 6 rats.

(i) Group Ia served as -ve control group and received regular diet and water for 10 days.

(v) Group IV (cyclophsphamide and Z. officinale treated group) (6 rats) rats received Z. officinale as before followed by single dose of cyclophosphamide (150 mg/kg). Forty eight hour after cyclophosphamide treatment, under light ether anesthesia, venous samples from the retro-orbital plexus were obtained by capillary glass tubes as described by Schemere (1967). Rats were sacrificed and heart of each rat was dissected and grossly inspected to assess any gross abnormalities; then they were washed with cold normal saline and used for oxidative markers measurement, light and electron microscopic examination and immunohistochemical staining.

(1) Determination of MDA (nmol/ g tissue: (MDA was assayed colorimetrically according to the method proposed by Ohkawa et al. (1979).

(2) Determination of GSH (mmol/g tissue): GSH was assayed colorimetrically according to the method proposed by Beutler et al. (1963).

Troponin i:  Was measured according to the method proposed by Collinson et al. (2001).

The heart was fixed in 10% formalin solution. After fixation, tissues were embedded in paraffin blocks and processed for 5 um thickness sections. These sections were stained by Hematoxylin and Eosin stains (Bancroft and Layton, 2013) and then examined by light microscope.

It was used for localization of inducible nitric oxide synthase (iNOS) in the cytoplasm of cardiomyocytes. For the immunohistochemical staining of iNOS, paraffin sections were cleaned in xylene, hydrated, and then placed in phosphate buffered saline (PBS; pH 7.6). Sections were treated with 3% hydrogen peroxide and then washed with PBS. Sections were incubated, first with 1% pre-immune rabbit serum to decrease non-specific staining then with a monoclonal antibody against iNOS (1:200 dilutions; (clone 1A4, code No. 0034851). Detection of the antibody was performed using a biotin–streptavidin detection system. The positive results for iNOS immunoreactions were indicated by brown cytoplasmic staining (Kiernan, 2008; Bancroft et. al., 2013).

The image analyzer computer system Leica Qwin 500 (Leica Ltd, Cambridge, UK) at the Image Analyzing Unit of the Pathology Department, Faculty of Dentistry, Cairo University (Egypt) was used to evaluate diameter of cadiac myocytes in H&E stained slides and optical  denisty  for  iNOS.  It  was  measured  using  the  interactive measure menu. Ten readings from five non-overlapping sections from each rat of all groups were examined.

The obtained data from biochemical (troponin i and oxidative stress markers (MDA & GSH & catalase activity) and morphometrical (diameter of cardiac myocytes and optical density of iNOS) analysis were expressed as mean ± SD (standard deviation) and subjected to one-way analysis of variance (ANOVA) and post hoc test using Statistical Package for the Social Sciences (SPSS) version 22.0. ANOVA was used for comparison between different groups (more than two groups), with p value less than 0.05 (the level of significance). Least significant difference (LSD) was used to find the statistical difference between the groups when ANOVA was statistically significant (P value <0.05) (SPSS Inc., 2013).

On supplementation of Z. officinale in (group IV), there was significant improvement of those parameters when compared with those in cyclophosphamide group (Group III). 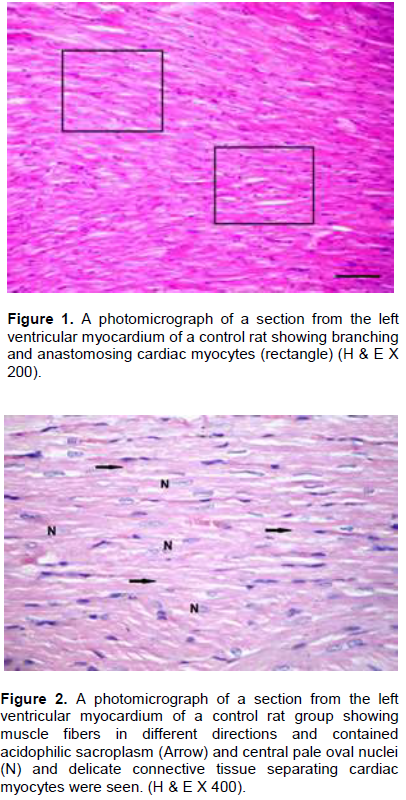 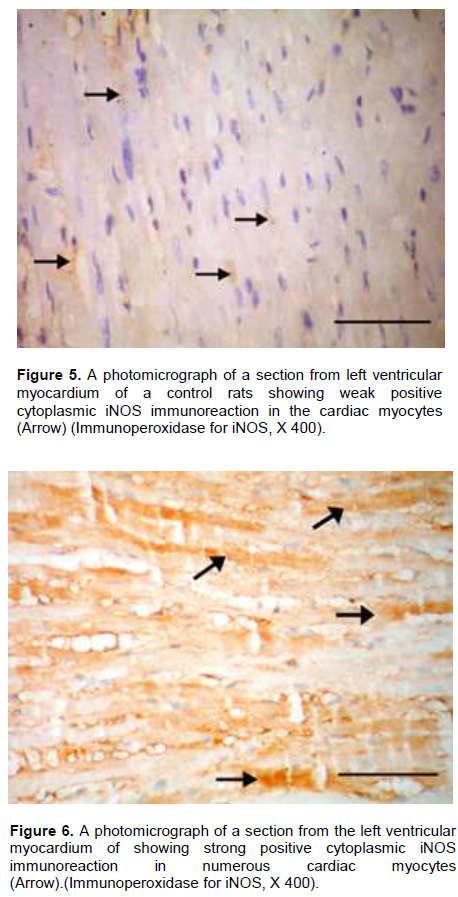 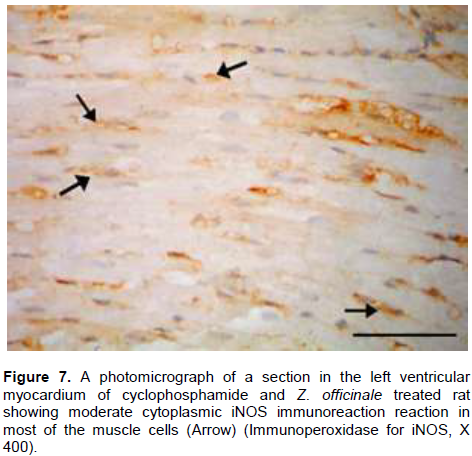 An electron micrograph of a section from left ventricular myocardium  of a control group showed cardiac myocytes with euchromatic nucleus with dispersed chromatin.  Myofibrils revealed alternating dark and light bands and dark prominent Z-lines. Numerous mitochondria were seen  between the myofibrils.  Adjacent  cells  were connected by intercalated discs which appeared as dark irregular lines (Figure 8). While, an electron micrograph of a section from left venricular myocardium of cyclophosphamide treated group  showed  cardiac myocyte with some vacuolations. Nucleus with dispersed and peripheral chromatin condensation was observed (Figure 9). Upon supplementation of Z. officinale there was a partial prevention of these pathological changes (Figure 10).

Cyclophosphamide is proved to be a cardiotoxic as it induced hemorrhagic myocarditis showing a typical clinical course invariably leading to mortality. Also, toxic endothelial damage by cyclophosphamide causes extravasation of toxic metabolites and results in myocyte damage, interstitial hemorrhage, and edema. The incidence of fulminant congestive heart failure is reported to be 5–19% (Kamezaki et al., 2005; Morandi et al., 2005). Cyclophosphamide cardiotoxic effect is related more to the magnitude of the dose administered during a single cycle rather than the cumulative dose over a period of time; cardiac failure associated with cyclophosphamide can be seen several days following administration (Dow et al., 1993).

Ginger (Z. officinale Rosco), a member of the family Zingiberaceae, well-known as a spice has been used for over 2000 years (Hasan et al., 2012). It contains biological active compounds as terpenes and oleoresin (Rahmani et al., 2014). Its broad spectrum of biological activities includes antioxidant, antimicrobial, antitumor or anti-diabetic effects (Masuda et al., 2004). It causes the suppression of both cyclooxygenase and lipoxygenase metabolites and arachidonic acid (Dugasani, 2010). The present study proved cardiotoxic effect of cyclophosphamide presented by significant increase in troponin I with disturbance of oxidative markers in heart tissue which was reversed significantly by supplementation of Z. officinale due to its antioxidant action. There was a significant decrease in the mean cardiac myocyte diameter in cyclophosphamide treated group as compared with all other groups. Some investigators have reported results similar to those of the current study (Iqbal et al., 2008).

According to Pai and Nahata (2000), high dose cyclophosphamide is associated with acute cardiotoxicity which is possibly related to an increase in free oxygen radicals. This increase would be mediated by elevated intracellular levels of the actual cytotoxic metabolite phosphoramide mustard. Cyclophosphamide administration has been proved to increase lipid peroxidation and deplete the antioxidant molecules as glutathione (GSH), catalase, and superoxide dismutase (Dorr and Lagel, 1994). Many studies have suggested that the use of antioxidants in combination with chemotherapy may prolong the survival of patients compared with expected outcome without antioxidant supplements (Manda and Bhatia, 2003; Sudharsan et al., 2006). These results are in line with Gado et al. (2013) who reported the possible cytoprotective effect of antioxidant against cyclophosphamide induced cardiotoxicity. Cetik et al. (2015) reported a dose-dependence on the cyclophosphamide -induced cardiotoxicity with disturbance of oxidative stress marker prevented by intake of carvacrol as antioxidant.

According to Chakraborty et al. (2017) combination of curcumin    with    piperine    exhibited   profound   cardio-protection effect against cyclophosphamide induced cardiotoxicity. Among the main active phytochemicals in Z. officinale gingerols, gingerdiol, shogaols, zingerone, and zingibrene are claimed to have antioxidant activity (Khaki et al., 2009). Some studies showed that Z. officinale treatment provided antioxidant effects by raising tissue concentrations of superoxide dismutase (SOD), catalase (CAT) and glutathione peroxidase (GPx). These antioxidants are important protection against oxidative stress due to their ability to detoxify free radicals, such as reactive oxygen species (ROS) (Harliansyah et al., 2005). Another study done by Morakinyo et al. (2010) supported the antioxidant property of ethanolic extract of Z. officinale. The present study revealed histopathological changes by both light and electron microscope in cyclophosphamide -treated rats which partially prevented upon supplemation of Z. officinale. These results are in line with Cetik et al. (2015) who reported histological findings as hemorrhagical lesions on myocardium and disruption of myocardial fibers prevented by intake of carvacrol as antioxidant.

Viswanatha-Swamy et al. (2013) proved massive change in the myocardium showing a varying degree of vacuolar changes in the cardiac muscle fibers mainly in the form of degeneration of myocardial tissue, vacuolization of the cardiomyocytes, infiltration of inflammatory cells and myofibrillar loss with cyclophosphamide treated group.

According to Omole et al. (2018) cyclophosphamide treated group shows distorted and wavy myocardial fibers with focal fatty change in some area of myocardial fibers. Loss of cellular constituents of the myocardial cells, myofibrillar loss and hypertrophic myocardial fiber with inflammation. improvement in histoarchitecture were noticed with use of Kolaviron as cardioprotective antioxidant. The result of immunohistochemical-stained sections of the control rats of the heart revealed weak positive cytoplasmic iNOS immunoreaction in cardiomyocytes. While, cyclophosphamide -treated rats showed strong positive cytoplasmic iNOS immunoreaction in numerous cardiomyocytes. On the other hand, immunohistochemical-stained sections of Z. officinale supplemented rats revealed moderate cytoplasmic iNOS immunoreaction in most of the muscle cells.

Fitzpatrick et al. (2005) stated that the up-regulation of iNOS expression is accompanied by increased nitric oxide (NO) production. The role of NO in cardiac function is complex, dependent on the level of NO produced.

Loren et al. (2009) mentioned that increased NO has been associated with relaxation of cardiac cells by an increase in cyclic GMP levels and likely plays an important role in modulating myocardial contractile function, ion channel activation, regulation of intracellular calcium, phosphorylation of contractile proteins.

According to the results of this study, administration of cyclophosphamide in adult male albino rats induced cardiotoxicity at the histopathological and biochemical levels which can be alleviated by supplementation of Z. officinale extract.

Human trials should be carried out, to establish the potential protective effects of Z. officinale in human intoxications. Future experiments are required to evaluate the possible protective molecular mechanisms of Z. officinale against cyclophosphamide -induced cardiotoxicity.