Ochratoxin A is a mycotoxin produced by moulds belonging to the Aspergillus and Penicillium species, and is a common contaminant of various food products. Ochratoxin A is known for its nephrotoxic and carcinogenic effects; protective actions to protect consumer health must be established. The aim of this study was to assess the level of contamination of manufactured coffee and cocoa-based products marketed in Abidjan to estimate ochratoxin A intake related to the consumption of these goods. We quantified ochratoxin A in 87 samples by high-performance liquid chromatography with fluorescence detection. Coffee samples contained an average of 4.0 ± 3.4 µg/kg ochratoxin A and cocoa-based industrial products 0.9 ± 0.6 µg/kg. OTA intakes were assessed using data obtained from the analysis and the estimated Ivorian adult daily consumptions. The average estimated intake for the Ivorian population is 0.15 ng/kg bw/d for coffee and 0.02 ng/kg bw/d for cocoa, lower than the tolerable daily intakes of 5 and 14 ng/kg bw/d, respectively set by the European Commission and World Health Organization. However, in view of the toxicity of OTA, it is imperative to establish legislation on mycotoxin in Côte d’Ivoire

Ochratoxin A (OTA) is a mycotoxin produced by moulds belonging to the Aspergillus and Penicillium species. OTA is a common contaminant of cereals, dried fruits, coffee and cocoa, as well as manufactured food products such as chocolate, wine, beer, and bread (Miraglia and Brera, 2002; Sangare et al., 2006). OTA-contaminated foods may be pathogenic to humans and animals (Rutqvist et al., 1978). OTA appears to be involved in Balkan endemic nephropathy (Pfohl-Leszkowicz et al., 2002; Castegnaro et al., 2006), and is genotoxic, immunotoxic, and carcinogenic (IARC, 1993; Pfohl-Leszkowicz and Manderville, 2007; 2012; Manderville and Pfohl-Leszkowicz, 2008; Mantle et al., 2010). The health risk due to OTA contamination of food necessitates establishing specific actions to protect consumer health worldwide. In Côte d’Ivoire, there is no regulation on mycotoxin and particularly ochratoxine A in foodstuffs. This exported cocoa ochratoxin A contamination assessment target is to answer the legal dispositions and regulations in exporting countries. In Europe, regulations (EU 1881/2006 and 105/2010) have set the maximal limits for some contaminants in foodstuffs, e.g. the limits of OTA. In 2006, the European Food Safety Authority (EFSA) established a weekly tolerable OTA intake of 120 ng/kg of body weight (bw). The European Commission (EC, 2010) stated that it does not appear to be necessary to establish a maximal OTA content for cocoa and cocoa-derived products to protect consumer health because these foodstuffs do not contribute significantly to OTA exposure and high OTA contents have rarely been detected in these food products. To guarantee the sanitary quality of cocoa, it is important for the cocoa producing countries to develop post-harvesting treatment guidelines to minimize OTA-contamination in cocoa. Indeed, analysis of cocoa bean samples from different producing countries revealed varying levels of OTA contamination between regions and even within the same area (Amézquetâ et al., 2005; Dongo et al., 2008; Copetti et al., 2010). Côte d’Ivoire is the largest cocoa-producing country (1,450,000 tons in 2012) and the 8th largest coffee-producing country in the world. Most of the Ivorian production is exported to Europe and North America; only a small amount is kept for home consumption. The aim of this study was to assess the level of contamination of coffee and cocoa-based products marketed along with the estimation of the dietary intake in the Ivorian adults.

Altogether, 87 samples, including 50 cocoa-based products (cocoa powder 100%; chocolate drink, chocolate bars) and 37 coffee samples (ground coffee; instant coffee), were collected from five supermarkets in Abidjan (Table 1) in accordance with EC N°401/2006 of 23 February 2006 specifying the methods of sampling and analysis for the official control of the levels of mycotoxins in foodstuffs (method for sampling coffee and coffee products: sampling at retail stage). Coffee and cocoa-derived product samples were collected during three distinct harvest seasons (January, March, and July). The coffee content of the coffee samples was greater than 60%, and the cocoa content of the cocoa-based products was greater than 25% (CODEX STAN 87-1981, rev. 1 – 2003). 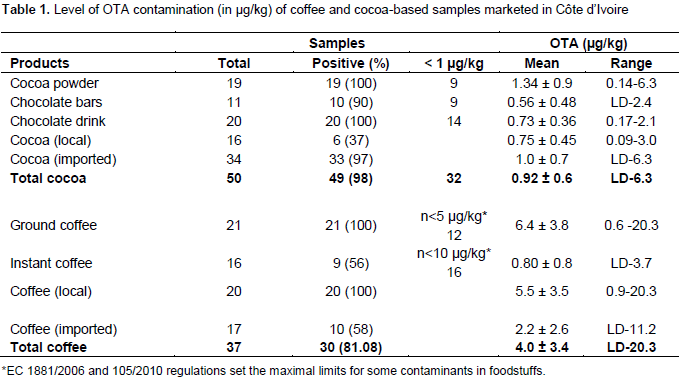 OTA extraction was performed under alkaline conditions as previously described (Amézquetâ et al., 2005). Three different samples of each matrix spiked with OTA and were analysed on the same day. The limit of detection (LOD) and limit of quantification (LOQ) were 0.05 and 0.2 µg/kg for the cocoa matrix and 0.1 µg/kg for the coffee, respectively. The average recoveries were 95.23±1.2 and 95.22, respectively for cocoa and coffee. Recoveries were consistent with relative standard deviations (RSDs) of less than 3%, demonstrating the precision of the analytical procedure. The method is valid according to Directive 2002/26/CE, which indicates that recoveries of 70-110% are acceptable for concentrations of OTA between 1 and 10 µg/kg. Solutions containing 1, 5, 10, 20 and 40 µg/kg OTA were measured to construct dose-response curves for OTA analysis with a linearity coefficient (r2) of 0.9995 and 0.9998 respectively for cocoa and coffee.

OTA intake was estimated from data of the International Coffee and Cocoa Organization (2014) related to the consumption of coffee and cocoa derivatives. The estimated mean cocoa consumption in Côte d’Ivoire is 0.048 kg of chocolate per capita per year, and that for coffee 0.13 kg per capita per year. The dietary intake has been calculated for a 70 kg adult. OTA intake was calculated according to the following formula (WHO, 2003):

Data are expressed as the mean ± standard error of the mean (SEM). The occurrence of OTA in samples was compared using a Wilcoxon matched-pair test, and statistical significance was established as p < 0.05.

Amount of OTA in the coffee samples

Twenty of the coffee products were manufactured in Côte d’Ivoire and 17 were imported. The average OTA content of the Ivoirian coffee was 5.5 ± 3.5 whereas that of the imported coffee was 2.2 ± 2.6 µg/kg. This difference was significantly different (p=0.035; Table 1).

Because coffee roasting is not a heavy manufacturing process, there are several local coffee merchants of ground coffee that represent the “under grade or fragments” coffee category; high contamination was observed in this category. Dembélé et al., (2008) reported the average OTA content of 100 coffee samples, depending on the grade collected, from the two seaports of Côte d’Ivoire as follows: grade 1:7 µg/kg; grade 2: 9.7 µg/kg; grade 3: 8.5 µg/kg, and fragments: 40 µg/kg. The authors established a linear correlation between the merchantability criteria and the content of OTA in coffee. The higher category (grade I or II) coffee is generally exported. Instant coffee which requires a more sophisticated industrial process is made at the local level by only one “multinational” manufacturer with higher quality standards for raw materials. Instant coffee samples did not generally exceed 10 µg/kg. Several authors reported that coffee manufacturing operations reduce OTA content. Coffee roasting has been the most studied. Roasting leads to a significant reduction of OTA, between 40 and 90% of the initial content (Van der Stegen et al., 2001). The detection of mycotoxigenic fungi in the postharvest processing by PCR-DGGE could also be a promising tool in order to reduce OTA production in coffee beans (Durand et al., 2013; Nganou et al., 2012)

Amount of OTA in the cocoa samples

Thirty-four of the 50 cocoa samples were imported, coming from France (25 samples), Ghana (5 samples), Spain (3 samples), and England (l sample). The average OTA content of the imported cocoa-based products and those manufactured in Côte d’Ivoire was 1.0 ± 0.7 and 0.8 ± 0.5 µg/kg, respectively. There was no significant difference between the level of OTA contamination in imported and locally manufactured products (Table 1). The high OTA content observed in the Ivorian samples evaluated in our study contrast with the low level of contamination previously reported for Ivorian products. Indeed, Coulibaly et al. (2013) analysed 1895 samples of cocoa collected from all the producing regions of Côte d’Ivoire between December 2013 and June 2014. The overall average level of OTA contamination was 1.4 ± 1.3 µg/kg. The average was 0.64 ± 0.53 µg/kg for cocoa for export (grade I and II), and that for non-exportable cocoa (under grade) was 1.9 ± 1.9 µg/kg.Several authors reported that cocoa manufacturing operations reduce OTA content. The operations of roasting, shelling, and the addition of additives were identified as operations that may reduce OTA content by 90% (Copetti et al., 2012).

The risks to public health related to the presence of a toxin in food are evaluated by estimating the quantity of the substance actually ingested and comparing this quantity with the toxicity reference values () established for the same substance. These metrics include the acceptable daily intake (), the provisional tolerable weekly intake (PTWI) or safety limit (SL). Thus, the High Council of Public Hygiene of France (HCPHF, 1999) and the Scientific Committee on Food (SCF, 1998 ) established a tolerable daily intake () of 5 ng/kg bw/d for OTA in 1999 and 1998, respectively. Similarly, the Joint FAO/WHO Expert Committee on Food Additives (JECFA, 2001) proposed a of 14.3 ng/kg bw/d in 1995 and then again in 2001. The average estimated intake for the Ivorian population is 0.14 ng/kg bw/d for coffee and 0.0017 ng/kg/bw d for cocoa (Table 2). These values are lower than either of the recommended (5 and 14 ng/kg bw/d). Coulibaly et al. (2013) estimated a dietary intake of OTA, from the consumption of cocoa-based products, for the Ivorian consumer of 0.004 ± 0.003 ng/kg bw/d for exportable beans and 11.0 ± 10.0 ng/kg bw/d for non-exportable beans. A study performed in France by the National Agronomic Research Institute (2004) also provided data on the levels of OTA contamination of coffee samples (0.04 µg/kg) and cocoa-based (chocolate: 0.25 µg/kg) foods. These values correspond to the very low levels of OTA exposure of 0.076 and 0.011 ng/kg bw/d, respectively, for adults (15 years and more) for coffee and cocoa.

Our results show that the prevalence of OTA contamination of coffee and cocoa-based products marketed in Côte d’Ivoire is high. OTA is detectable in greater than 80% of products with means levels of 4.0 µg/kg in coffee and 0.9 µg/kg in cocoa-based products. OTA intake estimated from the consumption of these products is, however, very low. In light of the toxicity of OTA, it is imperative to foster best practices for harvesting, pod breaking, drying, and storing cocoa beans to minimize their contamination. In addition, health authorities must enforce controls regarding foodstuffs.