Asbestos exposure risk from ceiling and other building materials

Although much research has been conducted regarding asbestos removal and worker exposure, there are gaps in our understanding of the extent of asbestos-containing materials still present in building materials and the effectiveness of exposure controls used during the removal of these materials. We conducted a review of third party surveys and exposure assessment reports to: (1)  Evaluate the exposure levels measured by personal and area asbestos air sampling during abatement of ceiling and other building materials to measure the effectiveness of site controls, (2) summarize the type and concentration of asbestos identified in residential and commercial buildings’ building materials. A literature research was performed using Bing, Google, and Yahoo search engines to identify (commercially) unpublished asbestos survey reports and air sampling reports during asbestos removal to assess exposure potentials. The data extracted resulted in 3012 bulk samples assessed for concentration and type; 617 contained asbestos. Forty-one types of Asbestos-containing material (ACM) were identified. All ACMs identified were chrysotile. The chrysotile concentration in the bulk samples ranged from non-detectable to 100%. Air sampling exposure data from two asbestos abatement projects were assessed. The maximum unweighted (time) personal exposure measured was 0.0201 f/cc. Based on our evaluation of the exposure records from the removal of ACM in both commercial and residential settings where type and concentration of asbestos was known, the risk for overexposure is low based on the effectiveness of implemented risk management strategies.

It is well documented in the scientific literature that asbestos was used in numerous building materials in the United States for many years until epidemiological evidence   began    to    mount   that   associated   human exposure to airborne fibers may increase risk of disease (GAO, 2018). Diseases related to exposure to ACM in the workplace identified by Irving Selikoff and other researchers helped to compel federal regulatory Protection Agency (EPA) in the 1970s to reduce exposures (GAO, 2018; Lemen and Landrigan, 2017). Of the three types of asbestos materials (chrysotile, amosite and crocidolite) that were used in building materials in the United States, chrysotile was used more than the others (EAI, 2015; USGS, 2005). Approximately, 95% of the asbestos that was used in building materials is chrysotile (ACGIH, 2013).

Other than demolition and renovation of ACM, there is no federal mandate that requires its removal because ACM that is in good condition pose a low risk (Mlynarek et al., 1996). As a result, given the pervasive use of ACM in the United States since the early twentieth century- with the continued installation of asbestos products to this day in select building materials- the full extent of the number of residential, public and commercial buildings with ACM is not fully quantified (EAI, 2015). According to OSHA (1994), 1,450,644 workers (estimated upper-bound) are potentially occupationally exposed to ACM during abatement, renovation, and routine maintenance work in industrial facilities.

The quality of the extracted data was assessed using criteria described in the Application of Systematic Review in TSCA Risk Evaluations (EPA, 2018). The survey and exposure assessment data from each report was evaluated and assigned a confidence level score (1-high confidence to 4 unacceptable) for each domain: reliability (methodology), representativeness (applicability), accessibility (data completeness), and variability/uncertainty (data completeness).

We summarized all of the asbestos survey and air sampling (exposure assessment) data identiï¬ed from the literature search in an Excel spreadsheet. The data were organized by industry type (commercial or residential) for the asbestos survey and work task or exposure source for the personal and area air sampling. The year the data was collected was also included, project site, study population, geography (state), personal and area asbestos exposure concentration, bulk sample description, bulk asbestos concentration, type of building material, and analysis method. For the personal and area air sampling data, the number of asbestos abatement workers present each day were recorded during the exposure assessment, the project exposure controls, the work activities occurring during the air sampling, and the personal protective equipment worn at each location. All but one of the reports was rated as high (Table 2). 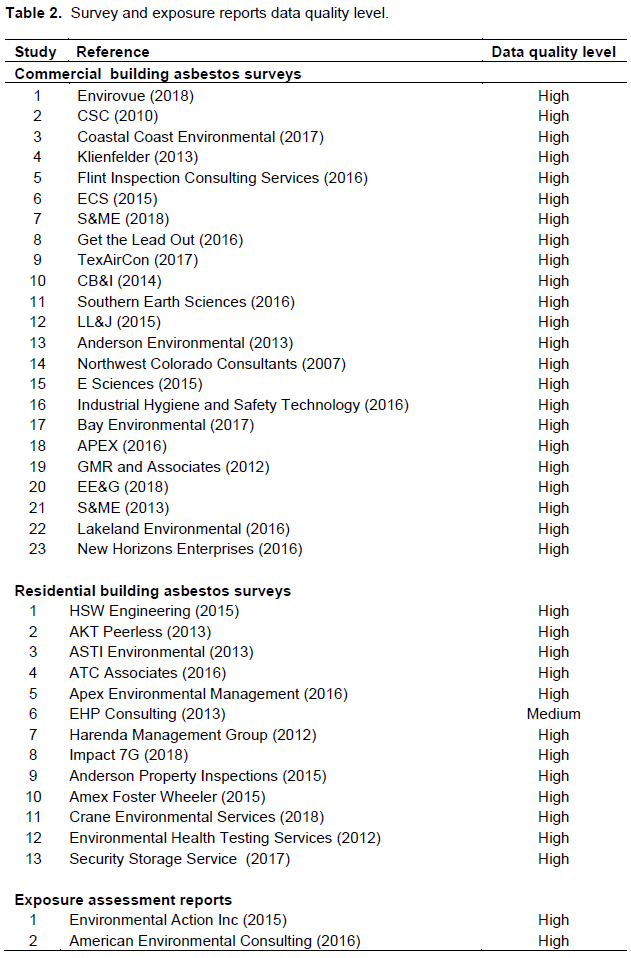 For each project included in this study, bulk samples were collected by a licensed asbestos inspector and analyzed by a National Voluntary Laboratory Accreditation Program (NVLAP) lab via polarized light microscopy (PLM). In general, the bulk sampling protocol used in the asbestos surveys followed those prescribed in 40 CFR 763.86 for the sampling of friable surfacing materials, thermal systems insulation, and miscellaneous materials. Samples of suspect ACM were collected from homogeneous sampling areas – with sample locations selected at random.

The abatement contractors (commercial and residential projects) used a containment constructed of polyethylene sheeting maintained under negative pressure during removal through the final clean up. All ACM were wetted before removal, and double bagged as it was removed. The asbestos containments at both sites were maintained under negative pressure. During the asbestos abatement of the commercial building, workers wore a full-face air-purifying respirator and a Tyvek suit.  For the residential project, the project field notes referred to the fact the workers “donned PPE” before exposure each day, but did not list the type of personal protective equipment worn. A decontamination trailer was set up for the exposed abatement workers  to  shower  and  change into clean clothes.

A statistical analysis was performed using the American Industrial Hygiene Association’s Multilingual IHSTAT + MS Excel application (2010) and Expostats Bayesian Calculator (2019). Descriptive statistical techniques were used to characterize the personal and area exposure distribution to assess the effectiveness of exposure controls during asbestos abatement. The proportion of positive samples was also assessed from each asbestos survey. The evaluation did not consider the size of the survey, only the proportion of samples testing positive for asbestos. The proportion was analyzed data using a classical random-effects meta-analysis of proportions, which accounts for sample sizes, and random effects for differences between the different studies (asbestos surveys). 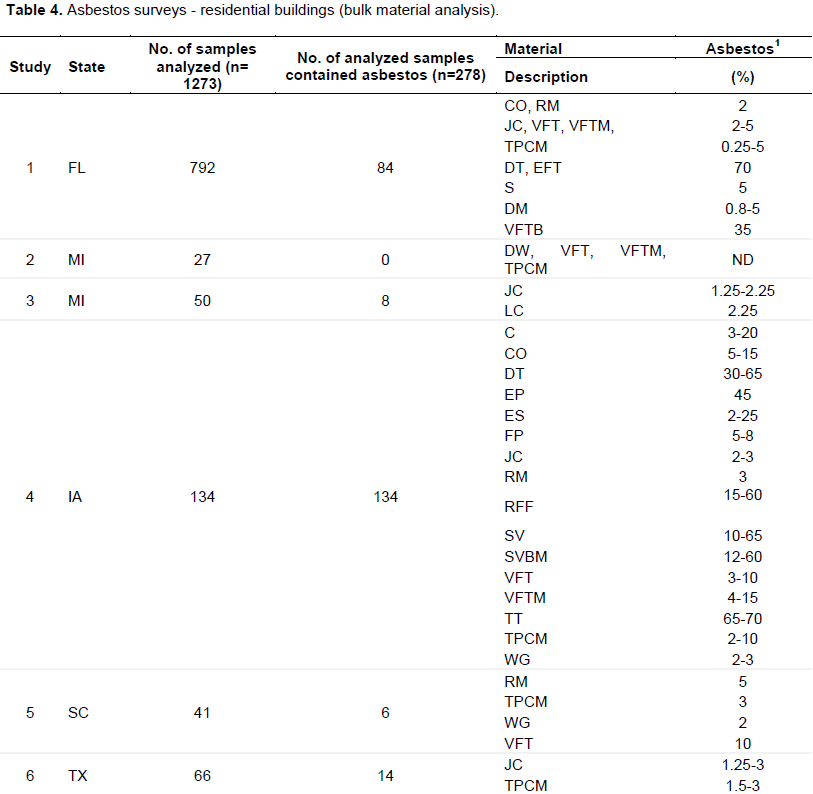 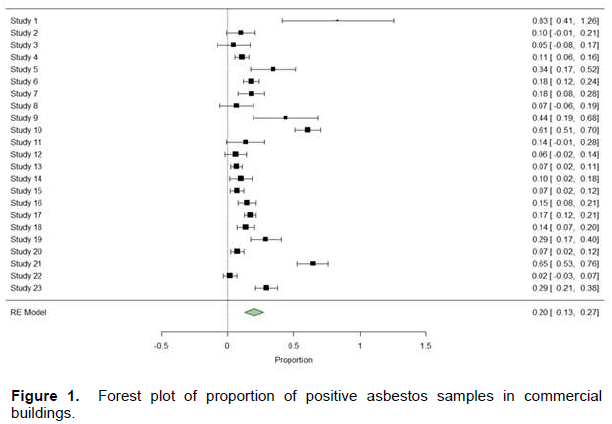 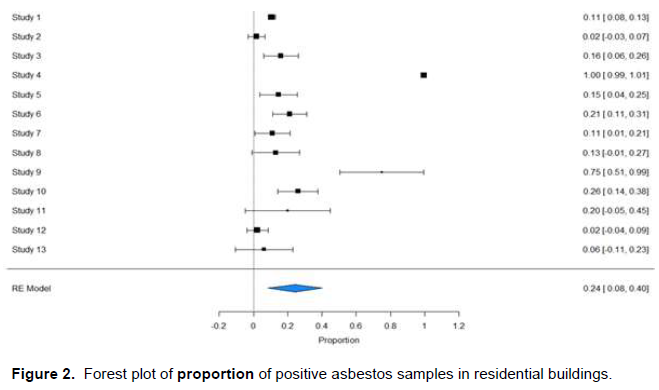 Personal and area exposures measured during the removal of asbestos from a commercial building are presented in Table 6. A total of 27 air samples were collected during asbestos removal.  Eighteen of the 27 samples collected were below the method’s (NIOSH 7400) detection limit. The maximum unweighted (time) personal exposure and area exposure inside of the active work containment were 0.0201f/cc and 0.011f/cc. The 95th percentile (point estimate) for the unweighted personal exposures was 0.03 f/cc. Based on a Bayesian analysis of the personal exposure data, the likelihood that the 95th percentile exposure during hand scraping is > OSHA’s asbestos Permissible Exposure Limit (PEL) (0.1 f/cc) is 3.4%. Figure 3 depicts time-weighted personal and area (inside containment) asbestos exposures. All exposures outside of the work containment were less than the method’s (NIOSH 7400) detection limit. The limit of detection for the samples in question ranged from <0.0038 f/cc to <0.0263 f/cc. Ten clearance air samples were also collected at the completion of asbestos abatement; all air samples were less than the analytical method’s detection limit range (< 0.0034 f/cc - <0.0038 f/cc).  All exposures were below OSHA’s asbestos PEL (0.1 f/cc). The exposure variability (geometric standard deviation) was moderate for the personal exposures and low for the area samples inside of the containment (Table 6).

A total of 385 air samples were collected during the removal of ACM. Area exposures measured during the removal of asbestos from a residential building are presented in Table 7. The maximum unweighted (time) area   exposure   inside  of containment  during  asbestos removal was 0.0156 and 0.0045 f/cc outside of the containment. The maximum unweighted (time) area exposure near the negative air machine exhaust was 0.006 and 0.007 f/cc in the cleanroom. Figure 4 depicts time-weighted average asbestos exposures from area samples obtained inside and outside of the containment. Figure   5   depicts   time-weighted    average     asbestos exposures near the negative air machine exhaust and in the cleanroom. Fifty-four clearance air samples were also collected after the completion of abatement. The unweighted (time) airborne asbestos concentration ranged from <0.0019 to 0.0053 f/cc. All exposures were below OSHA’s asbestos PEL (0.1f/cc). The exposure variability (geometric standard deviation) was moderate for the area sample exposures inside of the containment and low for all other sample locations (Table 7). 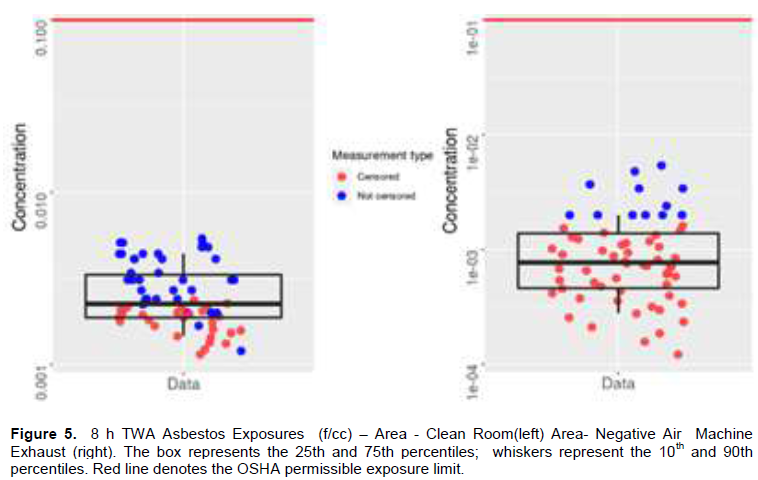 ACM were present in both commercial and residential buildings. The study identified 41 unique types of ACM after extracting data from both commercial and residential survey reports, all chrysotile. The highest asbestos concentration measured (100%) was found in a commercial building. The concentration and type of asbestos found in the surveys assessed for this study are consistent with previous research findings (HEI-AR, 1991; Jacobs et al., 2019). Many of the types of building materials that contained >1% asbestos were friable - meaning any renovation or demolition would trigger OSHA’s asbestos removal standard that requires a hierarchy of control exposure mitigation approach (OSHA, 1994).

All exposures were less than OSHA’s PEL of 0.1 f/cc during the removal of various ACM in commercial and residential buildings. The maximum, unweighted personal exposure measured was 0.0201 while hand scraping textured ceiling material. Out of the 122 personal and area samples collected inside of the active containment for both projects combined (commercial and residential), only 21 samples (17%) exceeded the project airborne clearance level of 0.01 f/cc during asbestos abatement activities. None of the area samples collected outside of the active containments (n=290) exceeded the 0.01 f/cc clearance level during asbestos removal activities.

According to Paustenbach (2020), worker exposure to only chrysotile in evaluated industries to OSHA’s asbestos PEL value of 0.1 f/cc, did not increase the risk of disease among those workers. As the 95th percentile personal airborne exposure level was three times less than OSHA’s asbestos PEL, the risk to workers performing asbestos abatement with implemented exposure controls is low. The assessed exposures would be considered well-controlled by industrial hygiene practitioners using AIHA’s exposure classification scheme (Bullock et al., 2015). The findings demonstrate the effectiveness of OSHA required control methods used to reduce the risk of overexposure to asbestos during the removal of building materials with varying asbestos concentrations. The asbestos exposures observed in this study are consistent with the findings of other researchers measured during similar asbestos removal activities (Perez et al., 2018; Lange, 2006).

The findings from this analysis of retrospective data provide vital information on exposure levels based on work tasks, asbestos type, and concentration of asbestos during the removal of textured ceilings and other building materials. Based on the evaluation  of  exposure  records (air monitoring data) from the removal of ACM in both commercial and residential settings, the risk for overexposure is not significant based on the effectiveness of implemented risk management strategies. Given the potential for overexposure when workers remove friable asbestos, it is prudent for asbestos removal contractors to effectively implement and evaluate the effectiveness of exposure controls on removal projects. While risk may not be significant with adequate exposure controls, the continued evaluation of risk management strategies should be part of any acceptable compliance plan to mitigate potential overexposures.