Avian metapneumovirus (aMPV) is an important poultry pathogen causing an acute highly contagious upper respiratory tract infection in chickens, and could result in swollen head syndrome. The disease causes significant economic losses in turkey and chicken flocks; however, its existence in the Nigerian poultry industry is not well defined. Also, the influence of weather on the prevalence of the disease is unknown. This study was therefore carried out to determine the prevalence of Avian Metapneumovirus in chicken flocks from different climatic zones of Nigeria during both dry and wet seasons. Eighty commercial chickens (growers and adults) including layer and broiler flock from randomly selected local government areas from each of Sokoto, Plateau and Oyo States of Nigeria, were bled via jugular venipuncture for detection and titration of aMPV antibodies in serum “(n=240 serum samples each from both dry and wet season)”. Assay was carried out using a commercial enzyme-linked immunosorbent assay kit (ID Screen®, Rue Louis Pasteur-Grabels-France) which was able to determine antibodies against A, B, C and D subtypes of the virus.  Out of a total of 480 samples collected, 287 (59.8%) were positive for aMPV antibodies. During the dry season, prevalence was 100, 56.2 and 48.8% in Plateau, Sokoto and Oyo States, respectively, while it was 52.5, 65.2 and 36.2%, respectively during the wet season. Commercial chickens screened during the dry season (68.3%) and mean aMPV antibody titer of 2990.95 had significantly (α<0.001) higher seroprevalence of aMPV antibody compared to those screened in the wet season (51.2%) and mean aMPV antibody titer of 572.98. This study therefore shows that aMPV circulates more in the dry season in the studied areas of Nigeria.

Profitable poultry production in the tropics including Nigeria is hindered by factors such as diseases, environmental stress and  poor  nutrition  (Sandhu  et  al., 2009). Respiratory diseases such as infectious bronchitis, infectious laryngotracheitis, Avian pneumovirus infection, Avian    influenza   and   Newcastle   disease   are   major  diseases of poultry worldwide (Cavanagh and Naqi, 2003), with negative impact on performance and productivity of poultry and ultimately, profitability of the enterprise. While the aetiology, epidemiology, pathogenesis and pathology of most of these diseases have been well studied in Nigeria, aMPV infections remain poorly understood.

Avian metapneumovirus, a member of the order Mononegavirales, family Pneumoviridae and subfamily Pneumovirinae has been proposed as the species for newly defined genus Metapneumovirus (Broor and Bharaj, 2007). The disease was first reported in 1978 in France and a similar disease was also diagnosed in Europe, Israel, Asia and in the USA. It is a major disease of turkeys and chickens in many parts of the world (Gough et al., 1994; Hafez et al., 2000; Broor and Bharaj, 2007). Avian metapneumovirus affects all ages of turkeys and chickens causing swollen head syndrome in chickens and rhinotracheitis in turkey leading to reduced productivity. Secondary bacterial infections especially by Escherichia coli, usually accompany these diseases causing increase in mortality (Hafeez et al., 2000; Al- Ankari et al., 2001). Clinical signs include sneezing, tracheal rales, nasal and ocular discharges, swollen infraorbital sinuses and foamy conjunctivitis, severe torticollis, opisthotonos, completely go off feed and water and usually die as a result of starvation (Gough, 2003; Cook and Cavanagh, 2002). Postmortem examination shows lesion located in the head region revealing caseous haemorrhagic exudate in the subcutis. Mild rhinitis, tracheitis and sinusitis are also seen to some extent, but in cases of secondary bacterial involvement, the air sacculitis becomes more severe, and it is usually accompanied by pericarditis.

Infectious disease transmission exhibits spartial and temporal variations that reflect seasonal interannual weather fluctuations, strong weather events and other natural events (Iver and Ryan, 2006). The average weather of a region, also known as climate is primarily driven by seasonal variables such as temperature, precipitation and winds (Iver and Ryan, 2006).

Shope (1991) presented a hypothesis that global climate change might result in a worldwide increase in zoonotic infectious diseases. Infectious disease distribution in livestock animals, timing and the intensity of the outbreak is often linked to climate, with variations affecting disease in several ways such as higher temperature, greater humidity, and changes in rainfall pattern which allows for easy thriving of the pathogens and vectors of diseases (Chew et al., 1998). Thus, for effective control of aMPV in Nigeria, it is imperative to understand the dynamics of the disease in relations to the different climatic zones and seasons that exist within the country.

This study was therefore carried out to determine the prevalence of aMPV antibodies in chicken flocks from different climatic zones of Nigeria  during  both  dry  and wet seasons.

Three States in Nigeria were selected for the study based on their location in different climatic zones of the country. These are Plateau, Sokoto and Oyo States. Using the Koppen climate classification showing in the Map of Nigeria, Plateau State is located at 9.2182° N, 9.5179° E. It lies within the tropical savanna climatic zone but has a near-temperate climate. Sokoto State is located at 13.0059°N,5.2476°E with a hot and semi-arid climate and Oyo State is located at 8.1574° N, 3.6147° E. It has a tropical savanna climate. The rainfall and temperature pattern of the study area are represented in Figure 1 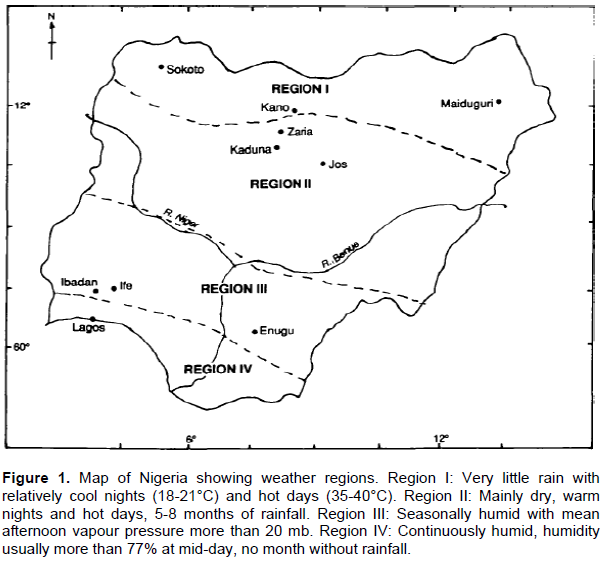 A total of 480 blood samples comprising of 80 samples from each of the three states (Plateau, Oyo and Sokoto state) in Nigeria were collected randomly, during both dry (December 2018 to February 2019) and wet (July to September, 2019) seasons, from commercial chickens aged between 6 and 70 weeks including layers and broiler flock in different farms with intensive and semi-intensive management from three randomly selected local government areas in each state. Flock sizes ranged from 189 to 22,000 birds, with most of the ï¬‚ocks containing 4000 to 6000 chickens. None of the ï¬‚ocks were vaccinated against aMPV. Birds seemed to be mostly healthy, although a number of the ï¬‚ocks experienced bouts of respiratory distress, clinically diagnosed as chronic respiratory disease. Blood samples were obtained by jugular venipuncture from the randomly selected layer and broiler chicken and taken to the laboratory with ice packs. Serum was obtained by centrifugation at 1,500 g for 10 min and kept at  20°C before use.

Serum samples were tested individually using a commercial Enzyme-Linked Immunosorbent Assay (ELISA) kit which is specific for the detection of antibody against aMPV subtypes A, B, C and D (ID Screen® Avian Metapneumovirus indirect Antibody Test Kit, rue Louis Pasteur-Grabels-France). Reagents were allowed to cool to room temperature of 26°C before use. The reagents were homogenized by inversion, serum samples were tested at a final dilution of 1:500 in dilution buffer. In the predilution plate, wells (A1, B1, C1 and D1) were set aside for controls. Serum samples (5 µl) to be tested and 245 µl of dilution buffer were added to each wells. In the microtiter plate, 100 µl of the negative control was added to wells A1 and B1 and 100 µl of positive control was added to wells C1 and D1. Dilution buffer (90 µl) was added to as many wells as there are samples to be tested, also prepared pre-diluted samples (10 µl) were added.

All data was entered and tabulated using SPSS version 20.0 Software. Descriptive statistics were conducted and Chi-square was used to compare aMPV prevalence based with study variables. The level of significance was stated at p<0.005.

Out of the 480 samples collected, 287 samples were positive   giving  an  overall  prevalence  of  59.8%.  The highest prevalence was observed in Plateau State, that is,  100% in comparison with 56.2 and 48.8% in Sokoto and Oyo States, respectively in the dry season (Table 1). In wet season the highest prevalence was observed in Sokoto state, that is, 65% compared with 52.5 and 36.2% in Plateau and Oyo States, respectively. 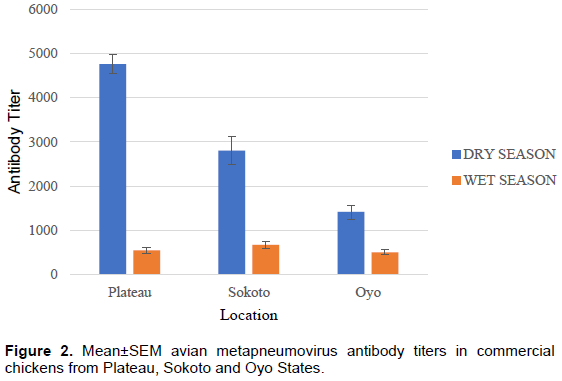 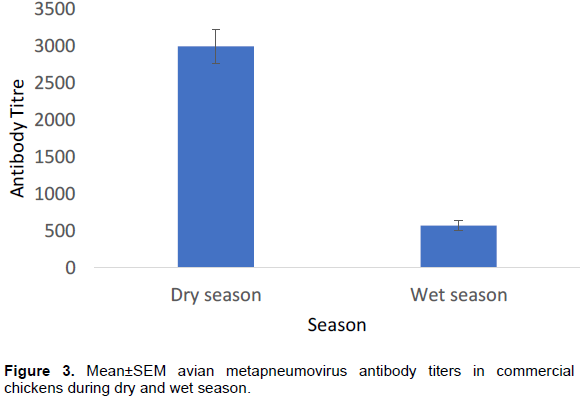 The results of this study revealed that 59.8% of the tested chickens in all the three States were serologically positive for aMPV antibodies. Previously a lower prevalence in chickens was reported in Southwest, Nigeriain (Owoade et al., 2008), however, similar rates as obtained in  this  study were reported previously from other part of the world (Gough, 2003; Owoade et al., 2008). In Poland, Minta et al. (1995) also used ELISA to detect seroprevalence to aMPV antibodies in sera collected from 39 broiler breeder flocks aged 12-96 weeks and 56.4% were positive. aMPV antibodies were detected even though there were no clinical signs in most of the tested chickens as reported by (Cooks, (2003). Results from this study showed that aMPV prevalence and mean antibody titer were higher during dry season (68.3%; 2990.9 ± 231.6) than during wet season (51.2%;572.9± 64.1). This shows that aMPV circulated more during the dry season in the study areas. Earlier reports by (Abdu et al., 1992; Olarenwaju et al., 2015) showed that respiratory diseases of chickens such as Newcastle disease are more prevalent during dry harmattan  season between November and March, than during the wet season in Nigeria. During dry season, prevalence and mean antibody titer were highest in Plateau State than Sokoto and Oyo States, this is probably due to dry harmattan wind and the prevailing cold temperature associated with the near temperate climate of plateau state. (AL-Ankari et al., (2001) and; Sa’idu et al., (2006) had earlier reported that windy harmattan, which is the weather of Plateau State during the dry season, encourages the spread of respiratory diseases such as Newcastle disease and aMPV infections. Also, the cold weather is likely to preserve the virus, induce stress in chickens and subsequently lowers their immunity, thereby rendering them more susceptible to diseases. However, during the wet season, Sokoto State had the highest prevalence and mean antibody titer. Although average monthly temperatures in Sokoto and Oyo States during the wet season fall within the same bracket, that is,  26.5–-28.1o and 24.1-25.3oC, respectively (Climate-Data.org, 2020), average monthly humidity is lower in Sokoto State (53-68%) compared with Oyo State (85-90%), which is an important factor in airborne transmission of diseases.

Commercial chickens are not vaccinated against aMPV in Nigeria, as such the high seroprevalence of aMPV in this study indicates constant exposure of commercial chickens to the pathogen and that low environmental temperature and relative humidity are important factors in its transmission. Isolation and characterization of circulating strains of aMPV in Nigeria is hereby recommended for formulation of strategies for effective control.

All experimental protocols carried out on the animals were  in   accordance  with   the  international  accepted principles for laboratory animal use and were approved by the University of Ibadan Animal care and use research ethics committee (UI-ACUREC) with assigned number: UI-ACUREC/17/0091.

This study is part of the author’s PhD research work at the University of Ibadan, Nigeria. The author is grateful to Dr Adebiyi from the Department of Microbiology, University of Ibadan for his suggestions and comments, as well as all staff of the Veterinary Laboratory and the participating farmers for their support during the experimentation.