Cross sectional study was conducted in Alage dairy farm with the objectives of determining the causes of reproductive wastages, their prevalence and the risk factors on 173 dairy cows (68 Holstein Friesian (HF) and 105 Borena breed) from November 2017 to April 2018. Additionally, a one year data, from September, 2016 to September, 2017 on a total of 172 cows were analyzed. From the one year record data, 33.72% (n=58) of the cows has showed either one or more of major reproductive health problems. In the cross sectional survey, out of the total cattle 31.79% (n=55) were found to be affected either with one or more of major reproductive health problems. The common causes of reproductive wastages identified include repeat breeder, metritis, retained fetal membrane (RFM), abortion, anoestrus, and dystocia with prevalence of 16.18, 6.36, 5.78, 4.05, 3.47 and 2.9%, respectively. The breed and body condition of cattle were found to statistically significantly associated with the occurrence of reproductive problems (p<0.05). The reproductive health problems were observed more frequently in HF breed and poor body conditioned cows. Number of parity and age of the cows were not found to be statistically significantly associated with the occurrence of reproductive problems (p>0.05). In conclusion, there were high reproductive wastages and multiple causes leading to reproductive wastages in Alage dairy farm, which needs due attention. Appropriate strategies to improve reproductive health in farm including training of farm workers to improve heat detection and artificial insemination efficiency, and enhancement of the general health management of the cows by applying appropriate herd health programs is recommended. Identification of etiologies of infectious diseases and their potential risk factors should be further studied in dairy cows.

Agriculture is the back bone of Ethiopian economy, which contributes above 48% of the national GDP (The Economist Intelligence Unit, 2007). The Livestock production takes share  of  30%  of  the  total  agricultural GDP. The livestock contributes to 16% of national foreign currency earnings (IBC, 2004).

Livestock keeping is in almost every family and been a traditional practice in Ethiopia. The livestock population of Ethiopia is estimated to be 52.13 million cattle, 24.2 million sheep, 22.6 million goats, 0.99 million camels, 8.73 million equines and 48.89 million chickens. From the total livestock population of the county, 45.13% are males and 54.87% are females (CSA, 2012).

The economic contribution of cattle to the country is limited as compared to its large population size.  A number of reasons can be involved to the low productivity of the cattle such as poor nutrition quality, high prevalence of diseases, poor management system and the types of breed (Shiferaw et al., 2005; Lobago et al., 2006). The other most important factors that contribute for decreased reproductive efficiency and performance of cattle is the prevalent reproductive health problems and disorders (Del-Vecchio et al., 1992).

Reproductive performance of dairy cows could be affected by associated factors including abortion, dystocia, retained fetal membrane (RFM), metritis, prolapse (uterine and vaginal), anoestrus and repeat breeder (Benti and Zewdie, 2014). Much attention has been given to control and prevent dairy cow’s epidemic and economically important diseases in the last few decades. Less consideration has been given to the prominent reproductive health problems and associated risk factors. Therefore, the objective of this research was to determine the causes and prevalence of reproductive health problems and assess potential risk factors associated to it in Alage dairy farm.

This study was conducted in Alage dairy farm, situated at 217 km distance from Addis Ababa, Southern Ethiopia.  The area is located at a longitude of 38°30’ East and latitude of 7°30’ North. The average altitude of the area is 1600 m above sea level, and characterized by mild subtropical weather with temperature ranging from 11 to 29°C. Alage has a bimodal rainfall distribution with an annual average of 700-900 mm (CSA, 2008).

The study animals were dairy cows owned by Alage College, both Borena breeds and Holstein Friesian (HF) breeds. To know the previous history of prevalence of major reproductive health problems in the dairy farm, recorded data of 172 dairy cows in the last one year period (September, 2016 to September, 2017) were used. For observational study conducted from November, 2017 to April, 2018, including a new entered cow, a total of 173 dairy cows were included in the study. From 173 cows, observed in the study, 25 were pregnant and 148 were dry cows. Body condition scoring of cows was conducted according to Matthew (1993). The age of cows was determined on the bases of the record data for individual cow.

A cross-sectional observational study and data recorded for the previous one year were used.

Results from one year recorded data

From a total of 172 cows data from record during the last one year, 33.72% (n=58) were found to have reproductive health problems. Among the all reproductive health problems, repeat breeder accounted for the highest prevalence of 18.6% followed by retained fetal membrane (RFM), abortion, anestrous, dystocia, metritis, vaginal prolapse that accounted for 6.98, 5.81, 4.65, 4.65, 4.07 and 1.16%,  respectively in the farm (Table 1). 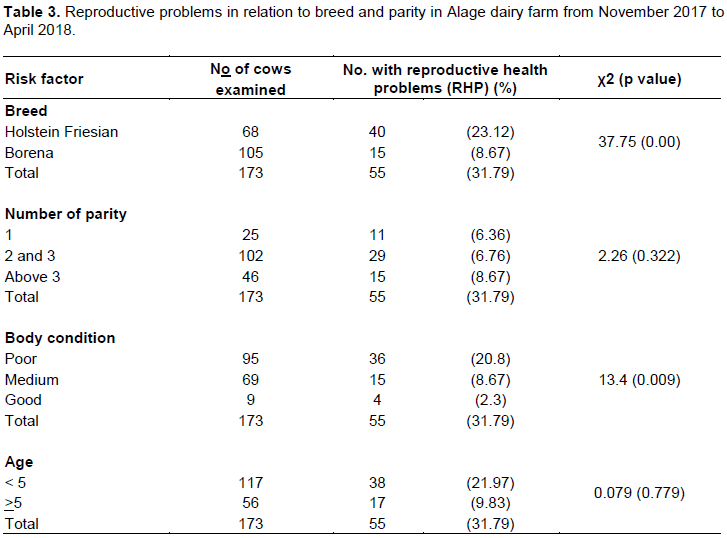 In this study, 31.79% of cows were found to show reproductive health problems. These results are in close agreement with previous reports of Wujira and Nibret (2016) in Wolaita Sodo town, Ebrahim (2003) in and around Kombolcha, Gizaw et al. (2007) in and around Nazaret town, central Ethiopia and Gashaw et al. (2011) in Jima town, southern Ethiopia, who reported the prevalence of reproductive problems as 35.5, 34.8, 31.76 and 33.59%, respectively. The reproductive health problems prevalence found by this study is higher than the report of 18.5%, Hunduma (2013) in Asella town and 26.5% Molalegne and Shiv (2011) in Bedelle. Whereas, Findings of the present research are lower than the reports of Hadush et al. (2013) in central Ethiopia, Haile et al. (2014) in urban and per urban areas of Hosanna, Southern Ethiopia and Dawit and Ahmed (2013) in North-East Ethiopia, reported 44.3, 43.07 and 40.3%, respectively. These differences in the reproductive health problems might be due to sample size differences in the studies, the difference in management system and the breeds of animals.

The prevalence of occurrence of repeat breeder, 16.16%, found in the present study is significantly higher than the findings of Hadush et al. (2013) and Haile et al. (2014), reported 10.3 and 13.08%, respectively. However, it is lower than that of reported by Hunduma (2013) 26.8% in Asella town. The causes of repeat breeder in cows and factors affecting its occurrence includes, use of infertile bulls, malnutrition, reproductive tract infections and poor management practices. The timing of insemination or proper detection of heat, appropriate semen handling and skilled insemination techniques were of paramount importance in preventing the occurrence of repeat breeder (Noakes, 2009). Hence the difference between the findings of the current study and previous reports may be attributed to either/or the above factor/s differences in the studies.

The 5.8% prevalence of retained fetal membrane in current study is in line with reports of Haile et al. (2014), Molalegn and Shiv (2011) and Tigabneh et al. (2017), who reported,  7.18,  8.6  and   7.6%,   respectively.   The finding of the current study is lower than that or reports of 14.28% by Mamo (2004) and 19.2% by Gashaw et al. (2011). The variation in the prevalence of RFM may be attributed to variations in predisposing factors to which the animals are subjected, which may include management, lack of exercise, dystocia, and infectious diseases. The prevalence of abortion recorded in this study was 4.05% and is in agreement with reports of Shiferaw et al. (2005) in Holetta, Wujira and Nibret (2016), Gebremariam (1996) at Mekele and its environs and Oumer (2003) in Kombolcha, 5.33, 4.8, 6.1 and 3.19%, respectively. The prevalence of abortion recorded in this study is lower than reports by Hunduma (2013) in and around Asella town 14.6 and 13.0% reported by Molalegne and Shiv (2011) in and around Bedelle. The lower prevalence rate of abortion may be attributed to breed, management system, study methodology and geographical location differences.

The prevalence of anestrous observed in study was 4.05% is in line with Wujira and Nibret (2016) and Tigabneh et al. (2017), who reported the prevalence of the problem as 4.8 and 5.3%, respectively. However, the finding of current study is lower than the results reported by Hadush et al. (2013) 12.9% in dairy cattle in DebreZeit and Haile et al. (2014) who reported 12.26% in urban and Peri urban area of Hosanna. The prevalence found by this study is higher than the prevalence reported by Molalegn and Shiv (2011), Zewdu (1992) and Ebrahim (2003) reported 1.7, 0.7 and 1.7%, respectively. The variation in prevalence of anestrous might be due to the age, inappropriate heat detection, breed, nutritional status, poor body condition and management system. The finding of vaginal and uterine prolapse was 0.58 and 1.73%, respectively, in this study and it is in agreement with report of 0.66% vaginal prolapse and 0.76% uterine prolapses by Molalegn and Shiv (2011). But the finding of this study is lower as compared to report of vaginal prolapse of 5.2% by Kidusan (2009). This variation might be due to management system differences, sample size and breed of animals. The high prevalence rate of reproductive problems in HF breed, 23.12% is higher than that of Borena breed, 8.67%, which may be due to the fact that European breeds are less adapted to tropical conditions of high temperature and humidity, disease and low feed quality than Borena breed (Mukasa, 1989). The HF requires better management in terms  of  feed,  health care than the Borena to get better reproductive performance and productivity in the tropics (Tekelye et al., 1991). So, the finding of this study is agreement with the reports of above researchers.