The study was carried out to investigate the development of the midbrain in the grey breasted helmeted guinea fowl, Numida meleagris galeata, at post-hatch. Domestication of this species of bird is in an increase, but scanty documentation on the development of midbrain (mesencephalon) and how it relates to the neurobiology of this bird is lacking. In our findings, there was a steady increase in the midbrain mean weights found to be 0.0418 ± 0.0081 and 0.2236 ± 0.0224 g on the first day and day 61 post-hatch, respectively. Morphological and cellular development shows the midbrain to develop immediately after hatch at day one. This indicates that auditory-visual activities are fully functional in the wild grey breasted helmeted guinea fowl and capable of independent survival immediately after hatching.

The helmeted guinea fowl (Numida meleagris galeata) is a native to Africa and belongs to the Phylum, Chordata; Subphylum, Vertebra; Class, Aves; Order, Galliformes; and Family, Numidae. It is widely distributed in the Guinea Savannah vegetation zone of Nigeria and estimated at 44 million in captivity (Ayeni, 1980).

Developmentally, in avian, the central nervous system develops from the neural plate, an epithelial sheet that arises from the dorsal ectoderm of the developing embryo (Hallonet et al., 1990). After neural tube closure, series of vesicles can be clearly distinguished morphologically at the anterior end indicating an anterior-posterior axis development (Joyner, 2002). The most anterior end of the neural tube gives rise to the procencephalon (forebrain) consisting of the telencephalon and diencephalon.  The  middle  part of the brain is the mesencephalon, often referred to as the midbrain, while the most posterior region from the brain is the rhombencephalon, which further differentiates into metencephalon (cerebellum and pons) and myelencephalon (medulla oblongata and spinal cord) (Hallonet et al., 1993).

The mesencephalon (midbrain) also comprises of the optic lobe, which is the visual roof, often named optic tectum, in non-mammalian species and superior colliculus in mammalian species (Northcutt, 2002).

Audition is of critical importance to a wide range of behaviours in birds, such as prey capture, individual and species recognition, vocal learning and mate selection. As a result of the range of behaviours that rely upon acoustic cues, studies of avian audition have revealed marked species differences in hearing range and the ability to localize sounds and discriminate pitch, intensity and temporal differences (Agawala et al., 2001). From this and other evidence, it is clear that several groups have evolved unique auditory specializations: localization of prey using only acoustic cues, vocal learning and echolocation in birds. Given that birds share many behavioural and neural similarities (Mogensen and Divac, 1993) with mammals, it is certain that such correlations also exist in bird midbrain.

Several research has been done to study the development of the avian brain, which includes; a pre-hatch study of the structural organization of grey breasted helmeted guinea fowl (Wanmi et al., 2016), the immunoreactivity of glial cells (Maximina et al., 1998), glial cells in the central nervous system (CNS) of healthy Passeriformes birds (Peer, 2012) and the development of chicken cerebellar cortex (Serdar and Emrah, 2010). Despite these studies, there exists a dearthof information on the histo-morphogenesis of the grey breasted helmeted guinea fowl in Nigeria.

In this investigation, an attempt will be made to find out the variations in the developmental anatomy of the midbrain in the grey breasted helmeted guinea fowl with regard to their developmental gross structure histogenesis, which may be helpful in the understanding of the neurobiology of this species of bird despite increase awareness on its domestication.

A total of eighty four fertilized guinea fowl eggs purchased from the National Veterinary Research Institute (NVRI) Vom, Jos, Plateau State, Nigeria and other local breeders within Jos and its environs were used for this study. The eggs were transported to a hatchery, still in Jos and incubated using their standard incubation guide. During incubation, the eggs were turned regularly (minimum of three times) each day for the first 24 days according to method modified by Moreki et al. (2012).

These eggs were allowed to hatch into young ones referred to as keets and were removed from the incubator and kept in a  standard laboratory cage.

This was done at pre-hatch using a scalpel blade and clean transparent dish. The blunt side of the scalpel blade was used, with the egg held on the palm, and a gentle tap was made on the egg until a crack was formed. Then, the crack was gently widened manually and the embryo collected in a white dish as modified by Salami (2009).

At pre-hatch, because the entire skull is soft and pliable, scalpel blade and rat tooth forceps were used for extraction of the brain. At post-hatch, the keets were euthanized using Nembutal at 40 mg/body weight. Thereafter, decapitation was made and the heads fixed in 10% neutral buffered formalin for 3 to 5 days. After proper fixation, a dissection was made at the angle of the beak up to the level of the occipital bone. The upper portion of the dissected area is pulled off gradually using the rat tooth forceps until the entire brain was exposed. The cranial nerves were severed to ease the lifting of the brain from the cranium. Extracted brain samples were fixed in Bouin’s solution for routine staining.

Separation of the midbrain

The midbrain or mesencephalon is located just caudal to the level of chiasma opticum rostrally and at the level of ponto-mesencephallic region caudally. After the midbrain removal, the anterior portions left are the diencephalon and the cerebrum. At the boundary between the diencephalon and cerebrum, an incision was made revealing the cerebral hemispheres held together by the corpus callosum. Each hemisphere was freed by a transverse incision into the longitudinal fissure. These landmarks were cut across using the scalpel blade to extract the midbrain.

Six brain samples were used for Hematoxylin and Eosin (H and E) technique; fixed brain samples were washed using tap water and dehydrated through ascending grades of alcohol (70, 80, 90, 95, 100%), within intervals of 3 h each, cleared in xylene for 2 h and embedded in liquid paraffin at 50°C according to standard

Morphometric data on the midbrain was analyzed using Statistical Package for Social Science (SPSS) version 17.0. In the analysis, the descriptive statistics was expressed as mean ± standard error of the Mean. 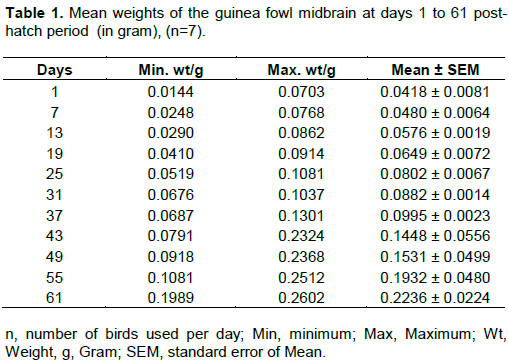 The chart shows that the midbrain at days less than 37 weighed below 0.10 g, and thereafter, increased progressively (Figure 1). 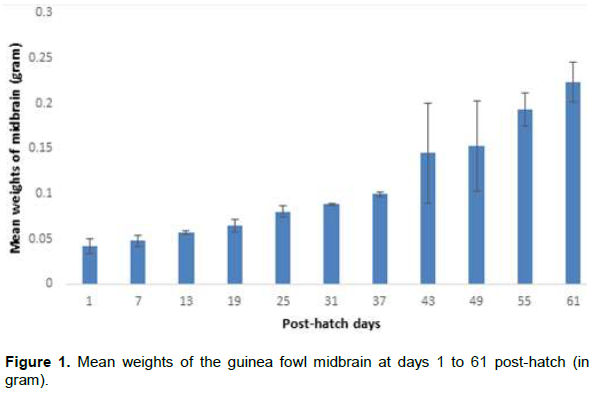 Grossly, the entire brain was fully developed at day one post-hatch. Ventrally, the olfactory bulb, optic tract and optic chiasm were well developed. The cerebellum projected upward and forward. The optic lobes were separated from and located below the cerebrum; attached to the lateral body of the cerebellum and had a flattened dorsal view which broadened ventrally. The midbrain was found to be made up of two ovals like bulge, the optic lobe and midbrain flanked on both sides by optic lobes (Plate 1). 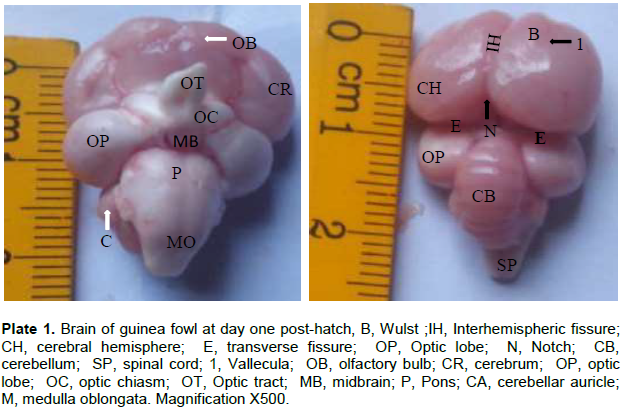 At four weeks of post hatch, different forms of nuclei were prominent with centrally located nucleoli in most of the large neurones (Plate 2). Mesencephalic ventricle, with different forms of neurons, possessing nucleoli and devoid of processes was evident when stained with cresyl violet fast (Plate 3). At week eight, nerve processes (dendrites and axon hillock) of large neurones were prominent. Large pyramidal neurones were seen to have dense cytoplasmic inclusions (Plate 4). Throughout with the use of cresyl violet fast stain, most of the neurones pick up dark stained cytoplasmic bodies.

From this present study, the mean weight of the midbrain increased with increase in days. This agrees with the statement that brain weights increase as the body weights increase, but the mean weight of the brain is lower than that of the body and that Galliformes had the lowest values which were not constant and could vary in birds of the same body weight (Xu et al., 2010). This increase in the weight of the midbrain signifies development is taking place, graphically seen with the chart increasing steadily.
The midbrain appeared like a stalk that is flanked by optic lobe laterally, cranially by optic chiasm. The midbrain in birds and reptiles is one of the regions that form an integral part of the acoustic- mediated behaviours that receives input from the two parallel auditory pathways and as such play a role in the integration of auditory information and is homologous to both the mammalian inferior colliculus (Carr and Code, 2000).
The optic lobe was large, well developed and located below the cerebrum with the cerebellum projected upward and forward. This indicated that the optic lobe of the helmeted guinea fowl was well developed and this was similar to the reports of Martin et al.  (2007) in the emu and pigeon and Iwaniuk (2003) in parrots.
The kiwi and barn owl have relatively small optic lobes (Wylie et al., 2006). The position of the optic lobe depends on the extension of the caudotemporal part of the cerebral hemisphere and the position in the parrot, kiwi and corvids were ventral (Iwaniuk, 2003), lateral and below the cerebral hemispheres in the diurnal raptor species, respectively (Shermean, 2013). The midbrain contains neuropil darkerd stained granule cells (small and large) similar to the observation of Ghatar (1992) in the developing brain of young rats.
These dark stained granules in developing brain may be due to the large proliferation of chromatin in the brain (Karten and Hodes, 1967) in which different forms of neurones with prominent and centrally located nucleoli occurred at a later stage.
The midbrain act as a relay station for part of the extrapyramidal system, in which lesion of the neurones in the chicken has led to transient tremor, ataxia and ipsilateral occulumotor disturbances (Mackenna and Callander, 1997).

Grossly and histologically, major features were fully formed on day one post-hatch. This signifies that, the keet of wild helmeted guinea fowl has a better developed sense of hearing immediately after hatching. Large neurones of the midbrain are capable of controlling gaits in this bird.

All technical staff of NVRI Vom, Plateau state and those of the Department of Veterinary Anatomy, Ahmadu Bello University, Zaria, Kaduna state, Nigeria are acknowledged.