Determination of some heavy metals residues in slaughtered cattle at Sokoto and Gusau modern abattoirs, Nigeria

Contamination of environment with heavy metal is a global problem (Matthew et al., 2002) which is caused by various human and natural activities (Srikanth et al., 2004) such as dumping of waste materials, use of agricultural pesticides and some chemical fertilizer, oil spillages, volcanic eruption etc. These toxic metals find their way into the food chain which may cause health problems to both human and animals.

In Nigeria, common sources of animal protein were obtained from both domestic animals (cattle, pigs, goats, sheep, chickens etc.) and wild animals (snails, antelopes, monkey, fish elephant etc.). The habitats of these animals are usually polluted with heavy metals, due to indiscriminate dumping of household and industrial waste materials on the land and water bodies, and un-authorized mining activities (Kamal and Kumar, 1998; Dioka et al., 2004). Some of these waste materials from the households, industries and mining sites may contain some heavy metals that are of public health importance to both humans and animals. Food animals (Domestic and wild animals) are freely reared or grazed on such contaminated environments. This may result in bioaccumulation of these metals in their tissues and organs. Contamination of animal feed and human food with heavy metals is a threat due to their toxicity, bioaccumulation, and bio-magnifications in the food chain (Demirezen and Uruc, 2006). The effects of heavy metals toxicity have been described in animals under relatively low concentrations of exposure (Kostial, 1986); the earliest effect of heavy metal toxicity is the disruption of trace element metabolism (Goyer, 1997; Lopez-Alonso et al., 2002). Reduction in litter size and weight, organs failure in animals and human may occur when large quantities of toxic and non- toxic heavy metals are ingested (Blowes, 2002).

Arsenic, cadmium, lead, and mercury are considered to be one of the major environmental pollutants, due to bio-accumulation in human and animal’s tissues and organs. Clinical signs may occur when the blood concentration of these metals is above 10 µg/dl but it varies with individuals (Miranda et al., 2009). Some of these metals have been identified as a leading cause of accidental poisoning in domestic animals more than any other substance (Casas and Sordo, 2006). Some of these heavy metals can be transported to a few kilometer by atmospheric transport before being deposited on the surface of plants, soil and water (Bolter et al., 1975). Ruminants and other animals serve as indicators of environmental pollution by heavy metals (Debackere, 1983).

The above show how man and animals are exposed to heavy metals, hence public health problems. This study was carried out to determine the concentrations of lead (Pb), cadmium (Cd), and chromium (Cr) residue in some selected organs and tissues of slaughtered cattle at Sokoto and Gusau modern abattoirs.

Sokoto modern abattoir is located in Sokoto-North Local Government Area of Sokoto State. Sokoto State is located in North west agro-ecological zone of Nigeria; it lies between longitudes 4°8'E and 6°54' E and latitudes 12°N and 13°58'N (UNEP/OCHA, 2010). The state shares boundaries with Niger Republic to the North, to the West is Kebbi State, and to the east is Zamfara State. The State covers a land mass of about 32,000 km2. Its human population is estimated to be 3,696,999 (NPC, 2006). Livestock population was estimated to have 3 million cattle, 3 million sheep, 5 million goats, 4,600 camels, 52,000 donkeys and host of other species of local and exotic poultry species. These make the State ranks second in Nigerian in terms of livestock population (MOCIT, 2002; Mamman, 2005).

Gusau Modern abattoir is located in the outskirt of Gusau town (Capital of Zamfara State), opposite Nigeria National Petroleum Corporation (NNPC) Depot, Gusau (along Gusau-Sokoto Road). Zamfara State is located on Latitude 11° 10' N and Longitude 6° 15' E, covering an area of 39,762 km2 with an estimated human population of 3,582,912 (NPC, 2006; UNEP/OCHA, 2010). The climate is semi-arid with temperature above 28.5°C; it has annual rainfall of less than 1000 mm and relative humidity below 70% (Odjugo, 2010). It shares borders with Kebbi, Kaduna, Sokoto, Niger and Katsina states. It also shares an international boundary with Niger Republic to the north (UNEP/OCHA, 2010). The State has the following estimated livestock population: 3,190,010 cattle, 4,933,304 sheep, 5,177, 348 goats, 34,796 camels, and host of other species of local and exotic poultry species (MOCIT, 2002; Mamman, 2005). Gusau abattoir is the main abattoir in the State. Cattle, sheep, goats and camels are the ruminants that are slaughtered for human consumption.

The study is a cross- sectional type and was carried out at Sokoto State and Gusau Modern abattoirs.

In each abattoir (Sokoto, and Gusau modern abattoirs), seventy five samples (75) comprising fifteen (15) liver, fifteen (15) kidney, fifteen (15) muscle, fifteen (15) hide, and fifteen (15) blood were collected from randomly selected slaughtered cattle. About 100 g of liver from any lobe, a whole kidney (either right or left), about 100 g of any part of the muscle, about 100 g of any part of singe or un-singe hide, and about 100 ml of blood from slaughtered cattle, were purchased. Each of the samples was packed in a sterile polythene bag, properly labeled with indelible marker, and was transported to Veterinary Public Health and Preventive Medicine laboratory of Faculty of Veterinary Medicine, Usmanu Danfodiyo University Sokoto, where it was frozen and stored in freezer until used.

All the frozen samples were packed on ice block in coolers and transported to National Research Institute for Chemical Technology Zaria, Kaduna State, Nigeria for further processing and analysis.

Liver, kidney, muscle, skin/hide, and blood samples were dried at 45°C using oven, after which individual sample was crushed into fine powder using mortar and pestle. 1.0 g of the fine powder sample was weighed out into porcelain crucible. The crucible plus the fine powdered samples was ignited in a muffle furnace at 500°C for eight hours. The samples were then removed from the furnace and allowed to cool in desiccators and weighed again. The difference between the weight of the crucible plus ash and the weight of the crucible alone was used to calculate the percentage ash content of the sample. 5 cm3 of 1M trioxonitrate (v) acid (HNO3) solution was added to the left-over ash and evaporated to dryness on a hot plate; it was returned to the furnace and heated again at 400°C for 15-20 min until perfectly grayish-white ash was obtained. The samples were allowed to cool in desiccators followed by the addition of 15 cm3 of 1M hydrochloric acid (HCl) to dissolve the ash and the solution was filtered into 100 cm3 volumetric flasks. The volume was made to the mark of 100 cm3 of the flask with distilled water.

In each of the prepared samples, cadmium (Cd), lead (Pb), and chromium (Cr) residues were determined under specified condition according to the manufacturer (AA-6800, Shimadzu Atomic Absorption Spectrophotometer) (Szkoda and Å»mudzki, 2005).

Data from the study were presented in tables, and bar charts. One-way analysis of variance (ANOVA) was used to establish the significant differences between mean concentration of Pb, Cd and Cr present in the kidney, liver, muscle, hide and blood at 95% confidence limits using Graphpad Instat 3.10, 32 bit software for windows 7. 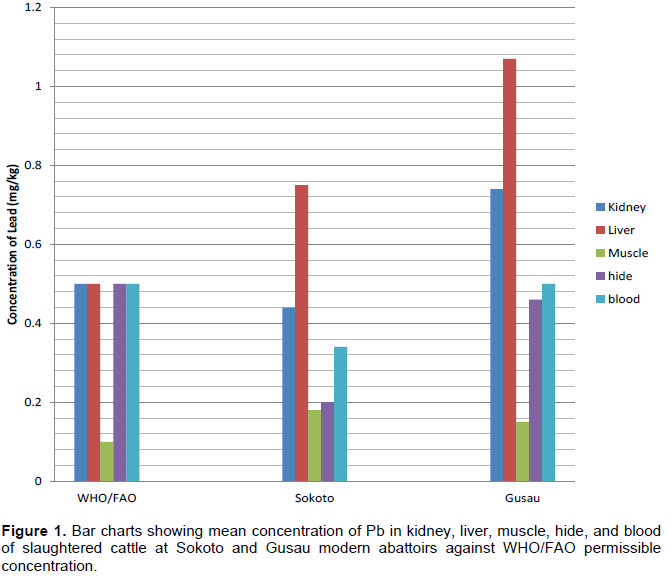 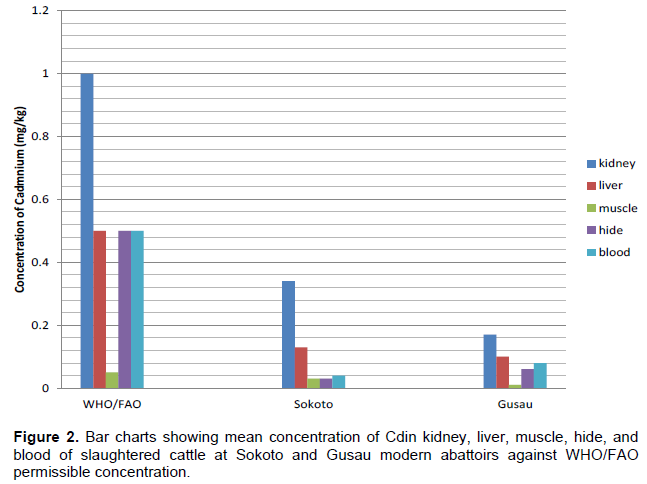 The mean lead concentration was generally high in liver of slaughtered cattle at Sokoto and Gusau modern abattoirs than other tissues and organs with the overall mean concentration of 0.75 and 1.07 mg/kg respectively. This may be as a result of liver being an organ of detoxification of toxic substances such as heavy metals, lead from blood and other tissue may be mobilised and taken to the liver through circulation for detoxification to take place. Excretion of lead to the bile which is later re-absorbed into the liver (enterohepatic biliary cycles); in the process liver may tend to contain high level of lead (Syracuse Research Corporation, 1990; Sedki et al., 2003). This finding was contrary to the findings of Nriagu et al. (2009) and Adetunji et al. (2014) who found the concentration of lead to be high in kidney than any tissues and organs of cattle.

Generally, the concentration of cadmium was found to be high in kidney compared to any tissues or organs. This may be as a result of metallothionein which is a protein found in the liver that usually removes cadmium from hepatocytes forming a cadmium-metallothionein complex; it is then released into the blood stream and filtered by kidney glomeruli, which can be reabsorbed into the kidney. It may result in high concentration of cadmium in the kidney than other tissues and organs (Squibb and Fowler, 1984; Roman et al., 2002). This finding is contrary to the findings of Nriagu et al. (2009) and Adetunji et al. (2014) who observe higher concentration of cadmium in liver than other tissues and organs.

At Sokotro modern abattoir, the mean Pb concentration in liver and muscle of slaughtered cattle exceeded the permissible concentration recommended by Food and Agricultural Organization (FAO)/World Head Organization (FAO/WHO, 2000). This means consumption of these organs/tissues of these slaughtered cattle may result in public health implications due to bioaccumulation of lead.

The results of this study showed that cattle slaughtered at both Sokoto and Gusau Modern abattoirs were exposed and contained different concentration of Pb, Cd, and Cr in their tissues and organs.  Liver samples contained high concentrations of Pb than kidney, muscle, hide and blood samples. Also, the concentration of Cd in kidney samples was high compared to liver, muscle, hide and blood. This has serious public health implications based on the large population which depends on these slaughtered animals for protein.