The porcine circovirus type 2 (PCV2) is commonly present along with the porcine reproductive and respiratory syndrome virus (PRRSV). These are the most important pathogens for pig industry worldwide. In this study, we determined frequencies for both viruses, as well as coinfection, in farrow to finish farms from México. For this, pigs from 28 farms in different states were sampled for tonsils, lungs and lymphatic nodes and assayed for PCV2 and PRRSV by polymerase chain reaction (PCR) and reverse transcription-polymerase chain reaction (RT-PCR). Herds detected positive were: 16 PCV2 (57%), 10 PRRSV (36%); and 5 had both viruses (18%). Samples detected positives were: 49% PCV2, and 39% PRRSV. Coinfection frequency observed in this work contrasted those observed in other countries. We think that these data will contribute to a better understanding of both diseases in order to take better measures for preventing and controlling them.

At the beginning, the porcine circovirus type 2 (PCV2) was reported in high-health porcine farms that were negative for common pig pathogens, including the porcine reproductive and respiratory syndrome virus (PRRSV) (Harding et al, 1998; Ellis et al., 1999). However, recently both diseases have caused great economic losses to the porcine industry (Piñeyro et al., 2015). PCV2 mainly affects animals between 5 and 15 weeks of age, inducing among several signs growth retardation and respiratory diseases (Segalés et al., 2005). In México, PCV2 has been reported since 2001 (Trujano et al., 2001), although a retrospective study done in a collection of sera obtained from 1972 to 2000 showed serological evidences of PCV2 presence since 1973 (Ramírez-Mendoza et al., 2009).
Today PCV2 is thought to be ubiquitous in porcine from our country, such as has been described in other countries (Segalés et al., 2005). The porcine reproductive and respiratory syndrome (PRRS) is one of the most important infectious diseases affecting the porcine industry, due to its heavy economic national and international impact (Blaha, 2000). PRRS is characterized by causing reproductive signs in sows, respiratory signs in pigs of different ages and severe weight loss in fattening pigs (Benfield et al., 1992). Serological studies in the United States have reported PRRSV occurrence in up to 80% of swine herds (Zimmerman, 2003).
In Mexican Republic, serological surveillances performed from 1995 have indicated that PRRSV is thoroughly distributed, and seropositive pigs are often detected in most of the industrialized farms (Weirmersheimer et al., 1997; Diosdado et al., 2004). In different countries, swine farms have registered very variable coinfection frequencies between PCV2 and PRRSV. In western Canada the frequency of viral coinfection was 20% (Allan and Ellis, 2000); in Spain 48% (Segalés et al., 2002); and in the United States up to 60% (Sorden, 2000).In this study we determined PCV2, PRRSV, and viral coinfection frequencies in pigs with evident growth retardation, from Mexican farrow to finish swine farms, in order to contribute with recent information for our country.

Ethics statement
Animals used in this study belonged to commercial farms and were slaughtered according to practices specifically regulated by Mexican Official Norm (NORMA Oficial Mexicana NOM-033-SAG/ZOO-2014, 2015).
Selection and screening of herds
A convenience transversal sampling of herds from industrialized farrow to finish farms from different states of México was made with the consent of each producer. For this, a total of 28 farms were sampled as follows: Guanajuato, 12; Queretaro, 10; Puebla, 3; Veracruz, 2; and Michoacan, 1.
Specimen collection
For each herd from one to two piglets between three to four months of age, and presenting clinical signs compatible with PCV2 or PRRSV infection, were slaughtered according to NOM-033-SAG/ZOO-2014 regulation. From each pig tonsil, lung and lymphatic node samples were taken. Samples were stored at -70°C until processed.
Detection of viral genomes by PCR and RT-PCR
Extraction of nucleic acids
From each animal equivalent quantities of tonsil, lung and lymphatic node tissues were pooled up to one gram, macerated with sterile sand in 5 ml of sterile physiologic saline, and centrifuged at 14,000 g for 5 min; 200 µl of supernatant were used to extract nucleic acids, using the High Pure PCR Template Kit (Roche), and following the manufacturer's protocol, with the exception of finally eluting the nucleic acids in 50 µl of sterile water for injection.
Amplification and detection of PCV2 DNA
In the polymerase chain reaction (PCR) to amplify the PCV2 genome primers used were: forward 5’-CAGCAACATGCCCAGCAAGAAGAAT-3’ and reverse 5’-TCGATCACACAGTCTCAGTAG-3’ (Ogawa et al., 2009), which flank a fragment of 703 bp from the PCV2 ORF V1. The components of the reaction mix were: PCR buffer 1x to make a final volume of 25 µl, MgCl2 1.5 mM, nucleotide mix, d’NTPs 0.2 mM, each primer 20 pmol, Taq Gold DNA polymerase 1.25 U, and sample DNA 2 µl (0.1-50 ng). Amplifications were carried out according to the following profile: an initial step of 4 min at 94°C; 35 cycles of 30 s at 94°C, 30 s at 54°C, and 90 s at 68°C; and one final elongation cycle of 3 min at 68°C. Products were analyzed on 1.5% agarose gels using the TAE (Tris-acetate-EDTA) buffer system, and visualized by the addition of ethidium bromide.
Detection of the PRRSV RNA by one-step RT-PCR
For the reverse transcription and specific amplification of the PRRSV RNA in a single tube, primers used were forward 5’-CCA GCC AGT CAA TCA RCT GTG-3’ and reverse 5’-GCG AAT CAG GCG CAC WGT ATG-3’ (Donadeu et al., 1999), which amplify a ~300 bp from the viral ORF7. The components of the reaction mix were: PCR buffer 1x to make a final volume of 25 µl, MgCl2 2.5 mM, dNTPs 0.4 mM, primers 20 pmol, Taq Gold DNA polymerase 1.25 U, reverse transcriptase (MuMLv) 12 U, RNase inhibitor 5 U, bovine serum albumin 3 µg, and RNA template 1 µl (0.01 ng-100 ng total RNA). The cycling protocol consisted of reverse transcription 30 min at 48°C; initial denaturation 10 min at 94°C; amplification 35 cycles at 94°C for 1 min, 58°C for 1 min, 72°C for 1 min; and then 7 min at 72°C. Amplification products were analyzed as indicated above. The one-step RT-PCR reduces the time taken to complete the assays, and the possibility of errors and contaminations.

In our hands, PCR used for detection of PCV2 DNA efficiently worked on pooled samples taken at industrialized Mexican swine farms, producing respective amplicons 703 bp in length (Figure 1). Similarly, under previously established conditions for RT-PCR, a 300 bp amplicon from PRRSV ORF7 was obtained (Figure 2). For detection of PCV2, a total of 28 farrow to finish farms were sampled in five states of Mexico; 16 (57%) of the 28 swine farms were positive. A total of 37 (49%) of 76 tissue pool samples resulted positive by PCR. All animals studied in the states sampled were positive for PCV2 DNA. The RT-PCR assay showed that a total of 10 (36%) of 28 industrialized farms, and 30 (39%) of 76 tissue pools were positive for PRRSV RNA. Five farms (18%) were positive for both viruses (Table 1).  In this study we successfully applied PCR and RT-PCR assays to tissue samples collected from suspected Mexican pigs aged between 3 to 4 months for detection of PCV2 and PRRS. 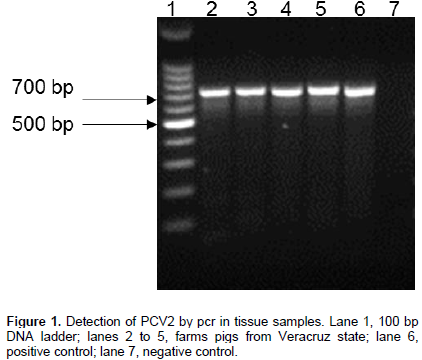 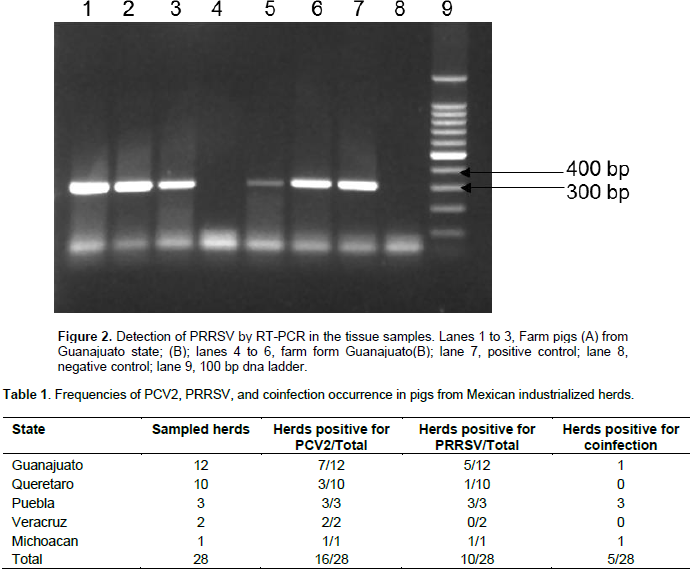 PCV2 frequencies reported over last years in different countries have been variable; a study in China found 47% of positive tissue samples from domestic pigs (age not defined) (Sun et al., 2015), while another work, in Japan found 80% of positive tonsil samples collected from pigs aged 6 months (Saekhow et al., 2015). Our results showed that PCV2 was detected in all states, with a frequency of 57% of positive herds, and 49% of positive animals, in five European countries 42% of fecal samples taken from both healthy and diarrheic pigs were positive and the percentage was higher in healthy compared to diseased animals (Zhou et al., 2016), which suggest that most PCV2 infections were subclinical. In our study only samples from diseased animals were included; it could produce very interesting results to include also healthy animals to determine total and subclinical frequencies.
With regard to PRRSV, our data indicate frequencies of 36% of positive herds, and 39% of positive animals, which is consistent with serological data reported since 1997 in different Mexican states (Weirmersheimer et al., 1997; Diosdado et al., 2004). Queretaro state had lesser frequency of infected herds for both PCV2 and PRRSV. This is likely due to a lesser density of pigs per farm, and longer distances separating sampled farms, in comparison with other states, Guanajuato for instance. Our study found swine herds positive for PCV2, PRRSV, and coinfections with percentages of 57%, 36%, and 18% respectively. Coinfection frequencies for herds contrast with reports for other countries such as Canada with 20% (Allan and Ellis, 2000); Spain, 48% (Segalés et al., 2002); US, 60% (Sorden, 2000); and Netherlands, 83% (Wellenberg et al., 2004). In our study, we had expected higher coinfection frequencies, since sampling was targeted at pigs with evidence of growth retardation and suggestive signs for the PCV2 and PRRSV presence.

In this study, PCV2 and PRRSV could be detected on pooled samples from several tissues by molecular amplification. PCV2 frequency observed for industrialized Mexican farms was 57%, different from that reported for other countries, while PRRSV frequency was 36%, similar to those reported for previous years in the Mexican Republic. This study, in which sampling was targeted at animals with evidences of clinical signs, were reports of PCV2/PRRSV coinfection in 18% of farms. We consider a priority to design a study more complete for a broader region, to include a greater number of Mexican states, as well as a bigger sample number. This was aimed to determine with a greater confidence the frequency of PCV2/PRRSV coinfections in Mexican porcine herds.

This study was funded by Instituto Nacional de Investigaciones Forestales, Agrícolas y Pecuarias (INIFAP) México (No. SIGI:16412319573). Thanks go also to the cooperating producers for the realization of this study.