A study on the fungi isolated from the carpeting, walls and Holy Qurans from the Blue Mosque and Little Hagia Sophia Mosque situated in the province of Istanbul

In this study the sampling of microfungus content from the carpeting, walls and Holy Qurans of two different mosques in the province of Istanbul was undertaken and in order to determine quantities. Samples were taken in 2015 during the months of January, April, July and October. The samples were taken with non-agar based sterile swabs and were then taken to the laboratory. Throughout the duration of the study, 17 species belonging to 9 genera were isolated and a total of 193 colonies were examined. Throughout the study the most commonly isolated microfungus genus was Aspergillus at 52.9%. This genus was followed by Penicillium at 26.5%, Cladosporium at 7.8%, Alternaria at 4.7%, Chaetomium at 2.6%, Trichoderma at 3.2%, Mucor at 1.1% and Eurotium and Rhizopus 0.6%.  Throughout the duration of the study the most isolated species of microfungus was Aspergillus fumigatus at 25.9%. This species was followed by Aspergillus flavus at 9.8%, Penicillium palitans at 9.3%, Aspergillus niger at 8.3%, Penicillium citreonigrum at 7.8%, Penicillium solitum at 6.3%, Aspergillus sydowii at 5.2%, Alternaria alternata and Cladosporium sphaerospermum at 4.7%, Aspergillus parasiticus at 3.7%, Trichoderma longibrachiatum at 3.2%, Penicillium citrinum and Cladosporium cladosporioides at 3.1%, Chaetomium globosum at 2.6%, Mucor sp. at 1.1%, and finally Eurotium herbariorum and Rhizopus stolonifer at 0.6%.

The close relationship between fungi and mankind has existed from the beginning of time. Due to the fact that fungi can spread and disperse in all segments of nature such as soil, air and water and use all manner of resource to find nourishment, ensures that, with such characteristics,  they  find   themselves   a   place    in   all geographies and climatic zones (Singh, 2005; Mallo et al., 2011;  Yassin and Almouqatea, 2010). The following factors ensure that fungi is determined as being important globally: The dissolving of organic matter, the fact that they are both pathogen and allergen for humans and plants, the fact  they are antibiotic forming and can cause foodstuffs to rot (Sarica et al., 2002; Çeter and PÄ±nar, 2009).
Through spores which are the reproductive form of fungi, fungi can easily disperse in the air and because of this possess the characteristic of diffusing widely. They can be found in great quantities both indoors and outdoors (Asan et al., 2004; Ilhan and Asan, 2001). The determination and identification of the poor quality of inhaled air arising from indoor work and living quarters on humans is not only very difficult but can lead to complicated diseases. As a result of this, one or a chain of symptoms give rise to the syndrome or syndromes known as “Sick Building Syndrome (SBS)” (Keskin et al., 2005a). Symptoms that can arise in relation to the building include eye corner irritation, influenza type symptoms, various allergic reactions, skin and throat dryness, lethargy, headaches and sometimes asthma (ÇobanoÄŸlu et al., 2005; Keskin et al., 2005b).
A number of negative effects can be seen in those who have a fungal sensitivity (Özyaral, 2003). Patients who suffer from fungi sensitivity and can therefore considered to be allergy patients can complain of the following symptoms: 71% of patients complain of muscle pain, 70% complain of lethargy and extreme tiredness, 67% complain of  cognitive disorders, 65% complain of sinusitis, 65% of headaches, 58% of digestive disorders, 54% complain of shortness of breath, 54% of depression, 46% of memory loss and other neuropsychiatric problems, 42% of problems with sight, 42%  of chest pains and a feeling of congestion, 40% of sleeplessness, 40% of respiratory problems, 38% of drowsiness, 35% of apathy, 35% of  laryngitis, 33% of sickness, 29% of fibromyalgia, 27% of skin irritation, 25% of shivering, 25% of colon disorders and 21% of heart palpitations (Stark et al., 2004).
The fungus species that cause allergies in humans are generally of airborne origin. The species that is primarily responsible for the mould that cause allergies in humans are species that are related to the genera of Cladosporium, Alternaria, Penicillium, Aspergillus and Fusarium. These species are commonly found throughout the world (Kalyoncu, 2010; GeliÅŸken, 2008; Suerdem and Yildirim, 2009).
The allergens that are produced by moulds can cause Ige dependant responses such as allergic rhinitis immunologically and allergic asthma. Less commonly they can give rise to immune dependant disorders such as allergic bronchopulmonary aspergillosis (ABPA), allergic fungal sinusitis and hypersensitivity pneumonitis. Non-immune effects are those as infection, inhalation temperature, mucous membrane irritation and effects linked to mycotoxins (Mazur and Kim, 2006).
It is known that carpets harbour a higher proportion of dust compared to wooden or nylon lined flooring. Studies have shown that some carpets harbour great quantities of allergens and in comparison to flat surfaces and air and it is   observed   cause   a   higher   rate   of   fungus  to  be reproduced (Beguin and Nolard, 1999).
Mosques are open day and night, all year around, at all hours and are open to the young and old, men and women, the educated and uneducated and are educational institutions which are of the upmost spiritual significance. Due to the common aim mosques are utilised for, they are platforms that are subject to a heavy flow of traffic in the form of users
Mosques are subject to hundreds of visitors daily and even though they are aired, the opportunity to clean them in the same way that a small area would be cleaned does not arise. Because of this, microorganisms are harboured internally and this gives rise to huge problems and respiratory tract diseases such as sinusitis and allergic disorders, amongst others, are caused by mould (ÇolakoÄŸlu, 1996; Ponikau et al., 1999).
The aim of the research carried out was to isolate and subsequently identify the microfungi found on the carpets, walls and Holy Qurans of the Blue Mosque and Little Hagia Sophia Mosque situated in the province of Istanbul. Mosques are extremely important from a spiritual and cultural perspective and the micoflora found in the two mosques will be exploited to ascertain the species of fungus dominant. This study, which focuses on mosques which are communally used spaces, is significant in that it highlights the risks fungi present in causing infections.

In the year of 2015 and in the months of January, April, July and October, samples were taken twice a month from the carpeting, walls and Holy Qurans of the Blue Mosque and Little Hagia Sophia Mosque in the province of Istanbul.
The samples were taken with non-agar based sterile swabs from the chosen stations. Sterile gloves were used during the sample taking procedure. The samples were taken at times to coincide when the mosques were full of visitors. Mosques in Istanbul used for sampling includes: (1)  Blue Mosque, and (2) Little Hagia Sophia Mosque.
Isolation
The samples taken were brought to the laboratory and were cultivated in Peptone-Dextrose Agar. 30 mg/ml of Rose-Bengal an antimicrobic agent was added to the prepared culture in order to hinder the size of the colonies and sterilised for 15 min at a temperature of 120°C and after cooling from 45 to 50°C, 30 mg/ml of Streptomycin was added prior to pouring into Petri dishes in order to hinder the reproduction of bacteria (Menzies, 1965). The isolated fungi were spot cultivated in Malt Extract Agar (MEA) medium and the Petri dishes were left to incubate at room temperature (22-26°C) and after 7 to 14 days, pure colonies were detected (ÇolakoÄŸlu, 1983).
Macroscopic characteristics include:
1. Colony diameter
2. Colony texture
3. Colony shape
4. Colony colour from above and underneath
5. Sporulation
6. Zonation
7. Exudation
8. Pigmentation
9. Existence of various macroscopic reproductive structures
Microscopic characteristics include:
1. Colony texture with stereo microscope
2. Shape of conidia upon budding
3. Measurement of various sections with light microscope
4. Perimeter characteristics
5. Perimeter colours
The above listed characteristics were used in the identification process (TikveÅŸli, 2013).
In order for the microscopic structures of the microfungi to be examined under a microscope, lactophenol solution dyed in picric acid was used (Bilgehan, 2002). For examination purposes, lamellae mounted slides were prepared. A few drops of lactophenol solution were added to the slide followed by the microfungi using a sterile pipette and finally sealed by lamella. After a while, the lamellae corners were sealed with the aid of a clear nail polish.
The slides obtained from the pure fungi cultures were examined using a microscope. An Olympus Cx22 make microscope was used in the study. In order to obtain readings, the ocular micrometre was placed in the ocular of the microscope. The microfungi were captured using a digital camera and subsequently the identification of these fungi was based on both national and international literature (ÇolakoÄŸlu, 1983).
For the identification of general species, “Fungi and Indoor Fungi, “Identification of common Aspergillus Species” and the publications of CBS-KNAW were utilised” (Samson et al., 2010). In addition to the above, “The Genus Aspergillus” was used for the identification of Aspergillus species (Raper and Fennell, 1965), whereas ‘‘Dematiaceous Hyphomycetes’’ was utilised for the identification of the Alternaria and Cladosporium species (Ellis, 1971) and ‘‘A Manual of the Penicillia’’ was used for the identification of Penicillium species (Raper et al., 1949).

As a result of samples being taken and isolated from the carpets, wall and Holy Qurans of two different mosques in the province of Istanbul, 193 colonies detected from 9 genera and 17 different species were examined (Table 1). 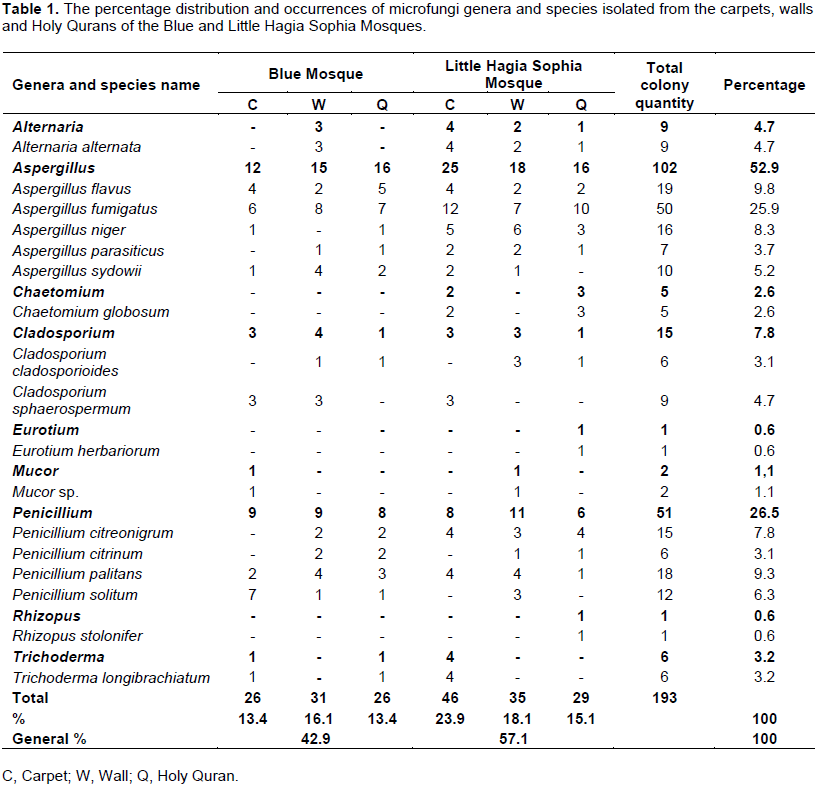 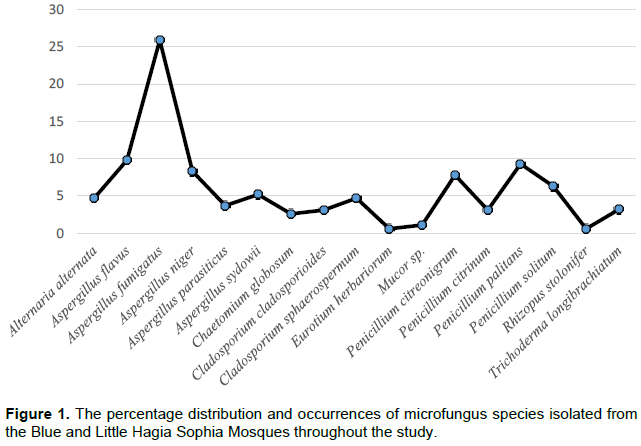 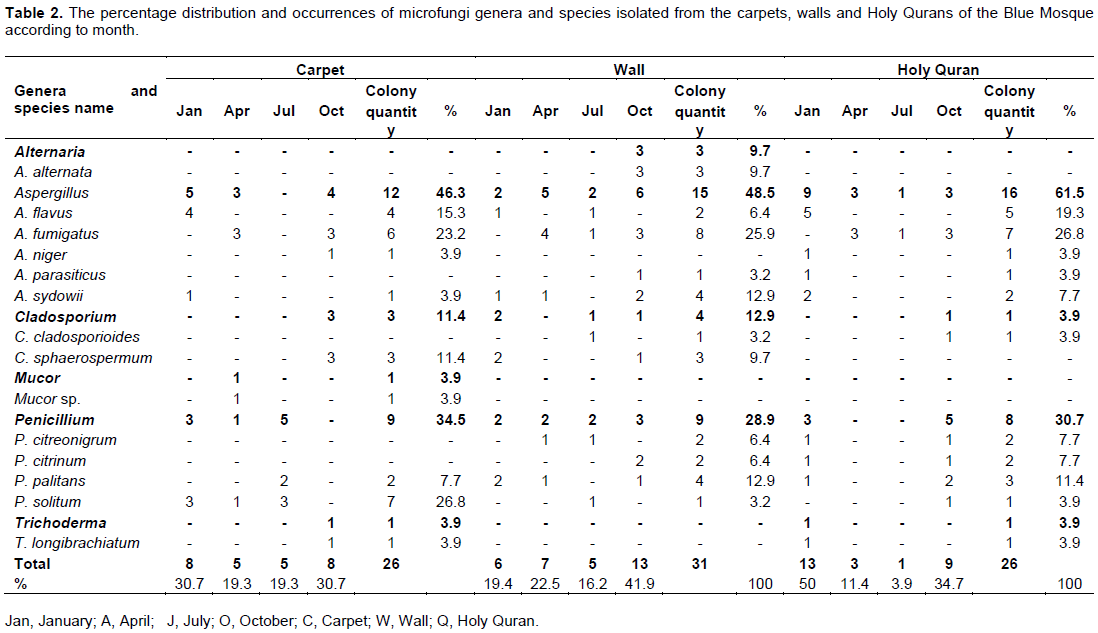 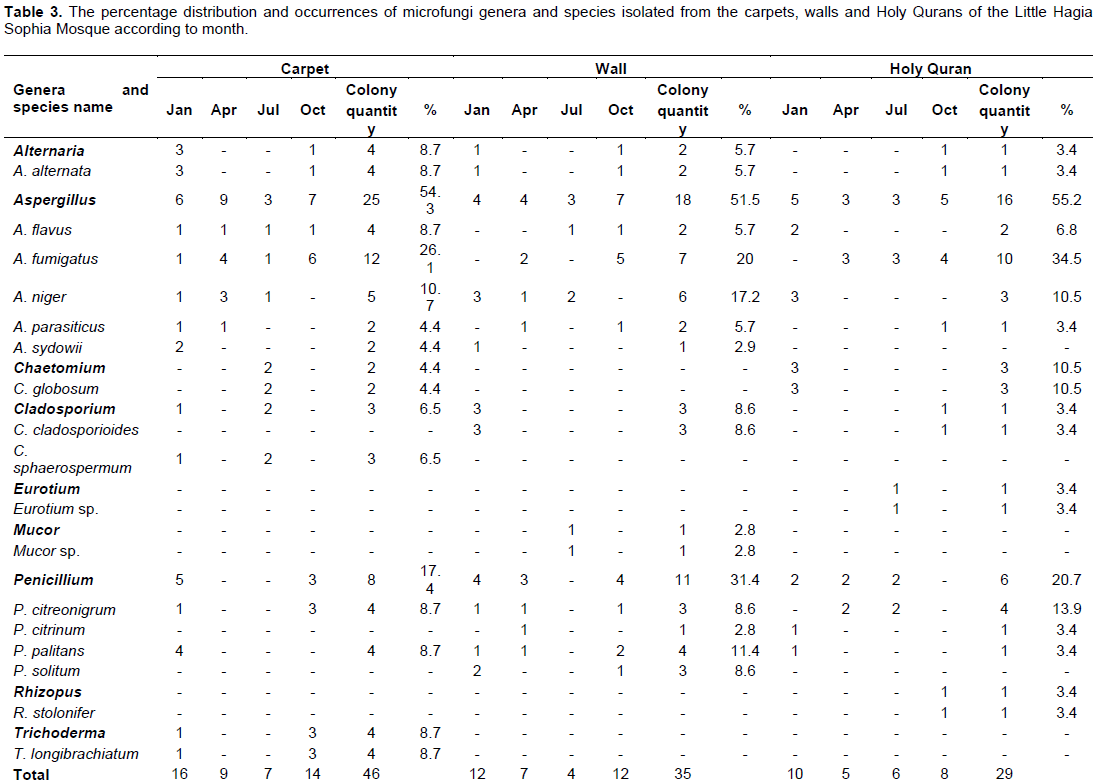 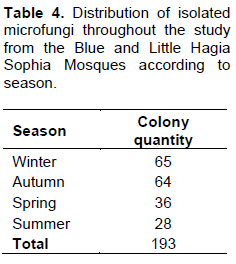 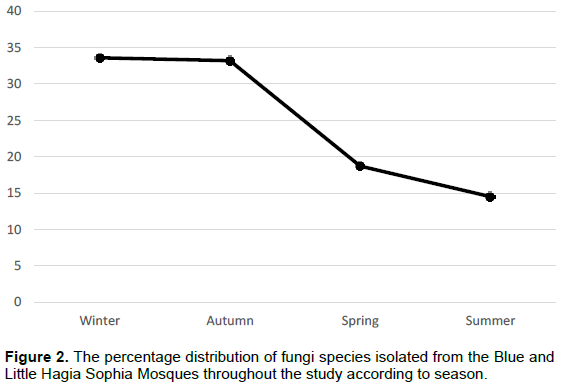