Recurrent vulvo-vaginal candidiasis is a major issue in pubescent females because of the fact that it is a source of health discomfort. For a better medical treatment, an analysis of susceptibility of Candida species to antifungal agents is fundamental. Therefore, this study aims to determine the susceptibility of Candida spp. to antifungal agents isolated in recurrent vulvo-vaginal candidiasis. This cross-sectional study was carried out in 2014 among 400 women with vaginal discharge. The recurrent vulvovaginitis was defined by the occurrence four times at least in a year. Vaginal swabs were cultured on Sabouraud-chloramphenicol medium, and Candida spp. were identified using a chromogenic technique. Susceptibility testing was performed using a microdilution method. In vitro susceptibility to antifungal agents test was performed using amphotericin B, 5-fluorocytosine, fluconazole, itraconazole and voriconazole against isolated Candida spp. Of 94 women positive from Candida spp., Candida albicans (59.6%) was the most prevalent with 59.6%. C. albicans did not show any resistance to amphotericin B and voriconazole. The susceptibility Candida glabrata to itraconazole was 50% and this species was relatively susceptible to fluconazole (77.8%) and voriconazole (83.3%). The medical treatment of recurrent vulvovaginal candidiasis requires a precise diagnosis based on a mycological analysis and the susceptibility to antifungal drugs.

Patient selection
This cross-sectional study was carried out at Institut Pasteur of Côte d’Ivoire from May to July 2014 among 400 women. Vaginal swabs were collected from women in ‘’Centre Hospitalolier Universitaire (CHU) Cocody’’ standing for Teaching Hospital of Cocody, and in “Unité d’Accueil et de Réception des Prélèvements” (URAP) standing for reception and sampling unit, Institut Pasteur de Côte d’Ivoire. Candida species identification and antifungal susceptibility testing were performed in the Mycological Laboratory in Institut Pasteur de Côte d’Ivoire. Target patients were women with vaginal discharge associated or not to other symptoms. The recurrent of vulvovaginitis was defined by the fact that it occurs four times at least in a year from a woman (Ringdahl, 2000). An informed consent form was obtained from the participants after the contents of the form were clearly explained.
Questionnaire administration
Upon a clear consent, a questionnaire was submitted to patients for information about each individual’s sociodemographic and clinical living factor. The questionnaire listed among others, points the age, the medico-surgical history, the factors that lead to the infection, the symptoms of the disease, some knowledge about the treatment used and about the recurrence factor.
Sample collection and processing
Before the insertion of the swab stick, the vulva was cleansed.
Then, the swab was obtained from the cul-de-sac with the aid of a speculum. An immediate analysis was performed with each sample, which was streaked on Sabouraud-chloramphenicol medium and then on Sabouraud-chloramphenicol-Actidione medium. Yeasts were identified via chromogenic method (CandiSelect®4 Biorad) which shows C. albicans (purple colonies), Candida tropicalis (dark green colonies), Candida glabrata (light green colonies), and Candida krusei (blue-turquoise colonies). The Auxacolor® gallery 2 (Biorad) was used according to manufacturer's procedures in case of diagnosis difficulty.
The isolated Candida spp. were tested to determine their antifungal susceptibility, the micro-dilution method according to the National Committee for Clinical Laboratory Standards (NCCLS) norms using the ATB® Fungus 3 gallery (Biomérieux, France). Five antifungal agents were tested in accordance with the manufacturing recommendation; there are amphotericin B, 5-fluorocytosin, fluconazole, itraconazole and voriconazole. Briefly, fungal suspension with turbidity of McFarland 2 was obtained with young colonies in an API NaCl 0.85% Medium tube. Then 20 mm of this suspension was poured into ATB F2 Medium with aid of a micropipette to homogenize. After that, 135 mm of the ATB F2 Medium content were divided up into cupules and incubated for 24 h at 37°C. The growth and the quantification factors of the yeasts were identified through visual reading by setting the gallery on a dark background to help along. A growth score for each antifungal agent was determined and noted in each cupule in comparison with the model cupules, beginning by the weakest growth.
Data statistical analysis
Data analysis was performed using SPSS 21 software (Statical Package for Social Science, IBM SPSS Statistics). All variables were classified in a group and the Fisher exact test was used to compare proportions. P-value < 0.05 was considered significant.

Sociodemographic and clinical data
In total, 400 women with a recurrent vaginal discharge were included in the study. The average age of the admitted patients was 29.2 years (standard deviation = 7.2 years) with extremes between 14 and 69 years. The patients between 14 and 19 years old were the most affected by the recurrent vulvovaginal candidiasis in a proportion of 31.6%. However, no statistically significant ratio between age and outbreak of recurrent vulvovaginal candidiasis was noticed. As far as marital status is concerned, women that are single or concubine were more exposed to recurrent vulvovaginal candidiasis (p=0.004). The women with primary school education level represented the most vulnerable.
Clinically, apart from vaginal discharge, vaginal pruritus was the most common clinical manifestation. Table 1 shows the socio-demographic and clinical characteristics of the population studied. 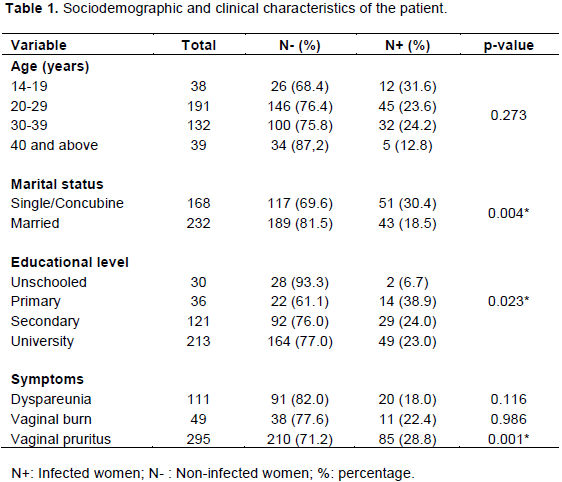 Mycological data
From 400 included women with a recurrent vaginal discharge, 94 were positive to Candida spp., a prevalence rate of 23.5% (95% CI: 19.49-28.02).
Five Candida spp. were isolated and C. albicans was the most prevalent at 59.6%. No case of mixed infection was seen among women. Figure 1 shows the distribution Candida spp. isolated from women with recurrent vulvovaginal candidiasis infection.
Antifungal susceptibility
The analysis on antifungal susceptibility focused on the three major species observed in the survey, which were C. albicans (56 strains), C. glabrata (18 strains) and C. tropicalis (15 strains). C. albicans did not show resistance to amphotericin B and voriconazole. Susceptibility rate varied from 89.3 to 96.4% with the other forms of antifungal agents. However, only a half of C. glabrata was found susceptible to itraconazole. This species was relatively susceptible to fluconazole (77.8%) and to voriconazole (83.3%). For C. tropicalis, the susceptibility rate to antifungal agents varied from 86.7 to 100% (Table 2). 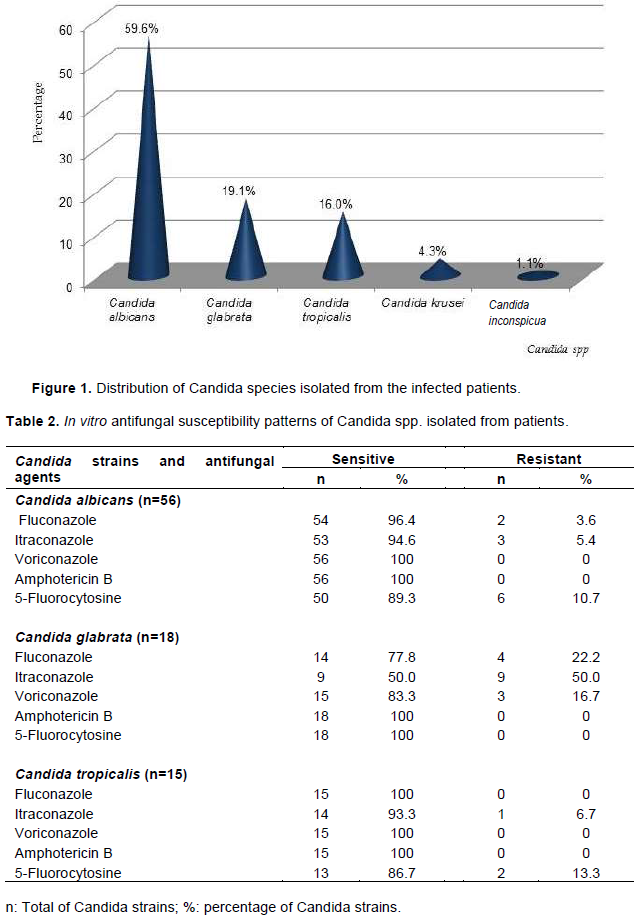 Recurrent vulvovaginal candidiasis is frequent and C. albicans is the most prevalent. The treatment requires a precise diagnosis based on a mycological analysis and on the determination of the species susceptibility to the antifungal agents. Thus, appropriate tests to detect the presence of Candida spp. and assessment of the risk factors linked to the outbreak of vulvovaginal candidiasis from women should help in infection prevention.

The authors are grateful to all patients who participated in this study and the Department of Parasitology-Mycologyof Institut Pasteur for its support in this work. Particular thanks to all the team from Gynecology Department of “Centre Hospitalolier Universitaire (CHU) Cocody for assistance during data collection.