This study aimed to examine the diversity of yeasts associated with bovine mastitis by employing molecular techniques in yeast identification. A total of 300 composite milk samples were collected from 26 peri-urban farms and examined. After culture, 37 (12.3%) fungal isolates were identified using the API 20C AUX. Polymerase chain reaction (PCR) and sequencing of the domains D1 and D2 of the 26S rRNA gene identified eleven (11) of these yeasts as Candida albicans (3 isolates), Saccharomyces cerevisiae (1 isolate) and Pichia Kudriavzevii (7 isolates). The D1/D2 26S rRNA gene sequences were 100% identical for the yeast isolates within the same species. It was found that all C. albicans had ability to produce germ tubes by incubation on human serum and chlamydospores. Antimycotic sensitivity showed that 78% fungal isolates were sensitive to amphotericin B. The presence of isolates of the pathogenic yeast, C. albicans in this study raises the possibility of cow milk being a vehicle of transmission of pathogenic yeasts.

Bovine mycotic mastitis is usually caused by yeasts, but mastitis due to filamentous fungi, mostly Aspergillus fumigatus has been reported. Mycotic mastitis occurs as sporadic cases affecting a small percentage of cows, or as outbreaks affecting the majority of animals. In both situations, however, the seriousness of infection depends on the number of organisms  present  in  the  glands  and  the species of yeast involved (Pengov, 2002).
Studies have shown that mycotic mastitis was on the increase, and the most frequently isolated organisms are Candida species (Tarfarosh and Purohit, 2008; Spanamberg et al., 2008) which are a group of unicellular opportunistic organisms, ever present in the natural surroundings   of   dairy   cattle   (milker’s  hands,  milking
machines, treatment instruments, floor, straw, feed, saw dust, soil, drug mixtures and sanitizing solutions) and are normal inhabitants of the skin of the udder and teats, where they exist in low numbers (Santos and Marin, 2005). They can invade mammary glands and cause clinical mastitis characterized by pain, prolonged fever, tenderness, inflammatory reaction in the mammary gland and associated lymph nodes, and also, reductions of milk yield and quality in animals (Seker, 2010). Some intra-mammary fungal organisms such as A. fumigatus and Candida spp. may result in death of affected animals (Krukowski et al., 2000).
Outbreaks of mycotic mastitis are generally believed to result from an ascending infection subsequent to incorrect administration of antibiotic preparations during drying-off period (Spanamberg et al., 2008), contamination of the teat end or cannulas by environmental yeasts and fungi, lack of hygiene during milking and poor equipment cleaning (Gaudie et al., 2009). Also, administration of large doses of antibiotics may cause a reduction in vitamin A leading to injury to the udder’s epithelium and affecting the micro-flora of the mammary glands, which acts as an animal natural defense, thus facilitating the invasion of fungi and yeasts (Seker, 2010).
The clinical signs of mycotic mastitis are non-specific and in some cases, their development may be masked by symptoms of an underlying disease. Therefore, the disease is generally diagnosed by demonstrating and identifying the etiological agent histopathologically and in culture (Krukowski et al., 2000; Santos and Marin, 2005). Current diagnostic methods have not proven to be sufficiently sensitive and specific to enable an early and effective diagnosis of the disease, with the result that the search for an optimal diagnostic method continues (Garcia and Blanco, 2000). Among non-culture methods under investigation, polymerase chain reaction (PCR) offers advantages over classical approaches, because theoretically, low level fungal infections (e.g. with Candida albicans) can be detected from minimal volumes of clinical samples such as blood, and DNA from both dead and viable organisms could serve as a target template for the amplification reaction (Polanco et al., 1999).
Random use of growth promoters, antibiotics and antimycotics in animals lead to immune suppression and development of multiple drug resistant strains to compounds used in human medicines (Ström et al., 2002; Magnusson et al., 2003). Probiotic bacteria present in the alimentary tract and vagina of humans and animals prevent the overgrowth of Candida spp. and thereby decrease the occurrence of mucosal or systemic candidiasis (Drozdowicz and Kwiecien, 2006; Zwolinska-Wcislo et al., 2006).
The increasing incidence of mycotic infection, the increasing resistance of mycotic species to antifungal agents and the rise in mortality  associated with infections by Candida species demand a safe way to prevent and treat infections such as mycotic mastitis caused by opportunistic yeasts and fungi. Therefore, the present study reports mycotic mastitis in some peri-urban dairy farms in Kaduna State, Nigeria, and the causal mycotic agents, diagnosed directly using PCR and DNA sequencing. This study draws attention to the importance of the disease in Nigeria, and could therefore stimulate interest for further investigations. 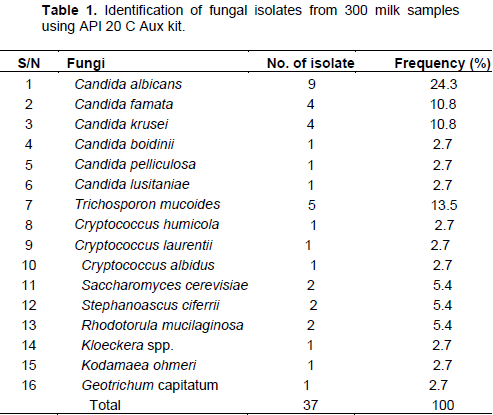 The percentage isolation frequency of fungi in this study was 12.3%, with 6.7% of isolates belonging to the genus Candida. The rate of Candida spp. isolation was higher than other yeast and yeast-like organisms (5.6%) (Table 1). This is in agreement with other studies, where Candida yeasts were the most commonly isolated aetiological agents of mycotic mastitis in cows with the most frequent and abundant species as: C. albicans, Candida krusei and Candida kefyr (Santos and Marin, 2005; WÅ‚adysÅ‚aw et al., 2010). The percentage of fungal isolation in  surveys  carried  out in many countries varies considerably, with as high as 25.2% reported in Egypt (Abd El-Razik et al., 2011), 17.0% in Tanzania (Kivaria and Noordhuizen, 2007), 7.1% in Poland (WÅ‚adysÅ‚aw et al., 2010), 8.9% in Brazil (Santos and Marin, 2005) and 10.2% from camels in Kano state, Nigeria (Kalla et al., 2008). These results show that miscellaneous bovine-mastitis pathogens such as yeasts and fungal species may be an increasing problem probably due to unhygienic udder preparation, contamination, unsanitary intramammary infusions practices, and indiscriminate use of antibiotics, particularly tetracyclines (Radostits et al., 2007). C. albicans isolates have the ability to produce different varieties of virulence factors that help it in adherence, pathogenesis and inducing the disease process in mammary glands. All the C. albicans (9) isolates in this study were able to survive in high temperature and produced chlamydospores and germ tubes (hyphal formation) which are considered as confirmatory for identification of C. albicans (Yang, 2003; Zaini et al., 2006). The source of these pathogenic yeasts in milk is not well known; however, but the milk samples may have been contaminated by infected persons during milking process or from the environment, as the organism is ubiquitous. Before now, food products have generally been considered as insignificant transmission vehicles of pathogenic yeasts (Fleet, 2007) but the present study shows that milk could act as a transmission vehicle of the pathogenic yeast C. albicans.
Four (10.8%) yeast isolates were identified as Pichia kudriavzevii (Candida krusei) using the API 20 C Aux (Table 1), while PCR and sequencing identified 7 isolates as P. kudriavzevii (Figure 1). This yeast is abundant in the environment and can be found in soil, fruits and various fermented beverages. So far, P. kudriavzeii is mainly associated with food spoilage, causing surface biofilms in low pH products. Many clinical cases have shown that P. kudriavzevii is the 5th most common cause of candidemia in immunocompromised patients (such as AIDS patients) (Kurtzman et al., 2011) and is therefore a species of clinical importance.

Cryptococcus species represented 8.1% of the isolates. However, C. neoformans, which is considered the most dangerous species, was not identified. But C. laurentii have been reported by other authors in cases of mastitis and in tanks used for milk storage (Spanamberg et al., 2008). Although, there are numerous reports of Cryptococcus spp. causing clinical mastitis, only 3 isolates of this genus were identified. Cryptococcus spp. has been reported as causing a rather severe clinical mastitis but since this study was concerned primarily with subclinical infection, fewer Cryptococcus isolates were expected. The cultural methods used may also have been more effective in isolation of Candida species.
Kodamaea ohmeri (Pichia ohmeri) was initially isolated in Brazilian artisanal cheese, cucumber salts (brines) used in the food industry for the fermentation of pickled foods, tree barks, fruits and marine fish (Borrelli et al., 2006; Li et al., 2008). It has also been isolated from environmental sources such as, pools, sand, floors and sea water (Chakrabarti, 2014). In the past, Kodamaea ohmeri was considered a contaminant, but at present some  species  are recognized as emerging opportunistic pathogens which can cause infection in patients with special underlying conditions including prematurity, immunosuppression, prolonged hospitalizations, prosthetic valves, peritoneal catheters or other medical devices (Ezeanolue and Piggott, 2007).
The presence of yeasts and yeast-like fungi may trigger alterations in the milk and dairy products due to the release of extracellular enzymes such as lipases and proteinases, which affect the quality and organoleptic characteristics influencing the shelf-life of the product. The diversity of yeasts and yeast-like fungi might have been influenced by the type of management system employed in the dairy farms studied. Although, it is not expected that these microorganisms can survive thermal treatment, milk may be a carrier for a great diversity of agents that could be harmful to public health (Krukowski et al., 2006; Kivaria and Noordhuizen, 2007).
Recent data indicate that, molecular techniques based on PCR have been used as a tool for diagnosis of several fungal species (Senses-Ergul et al., 2006; El-Sharoud et al., 2009 and Noumi et al., 2009). In the present study, the PCR product of D1/D2 region of all isolates tested indicated the presence of 1 distinctive band (600bp) (Plate 1). The % identity from blast show that all the isolates identified as Pichia kudriavzevii (also known as Candida krusei) were between 97-99% identical to Pichia strain; the 3 Candida isolates show 95-98% identity with C. albicans, while only 1 Sacchromyces cerevisiae isolate was 91% identical with Sacchromyces strain from the blast (Table 2). 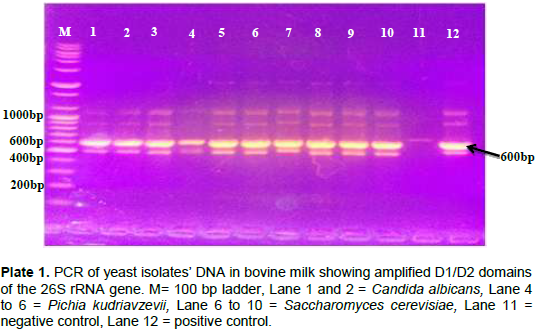 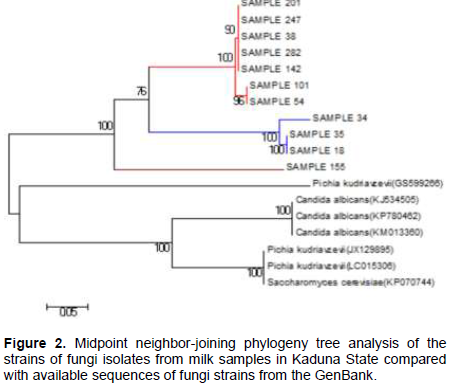 The heterogeneity in the D1/D2 26S rRNA gene of C. albicans isolates as shown in this study was not expected, although the sequences of 2 isolates were 100% identical (Figure 2). This is consistent with previous studies on the heterogeneity of the 26S rDNA sequence in other yeast species, such as C. dublinensis, P. guilliermondii and C. lusitaniae which revealed very few nucleotide substitutions among strains pertaining to the same species (El-Sharoud et al., 2009).
Although, antimycotic drugs have been used for treatment of yeast mastitis, there is no clear evidence of the effectiveness of this therapy (Crawshaw et al., 2005; Krukowski et al., 2006). But in this study, 29 (78.1%) of the fungi isolates were sensitive to amphotericin B while, 24 (77.4%) were sensitive to griseofulvin and 13 (42%) to nystatin (Table 3). In terms of decreasing efficacy of antimycotics on isolates used in this study, antimycotics can be  ranked  as follows:Amphotericin B > Griseofulvin > Nystatin > Variconazole > Fluconazole

This study has showed that diverse yeasts existed in the examined milk samples from peri-urban dairy farms and confirms the involvement of yeast in some of the cases of mastitis in dairy cows. Also, this study reports the 1st incidence of the pathogenic yeast, C. albicans in cow milk in Nigeria and that milk could act as a transmission vehicle of this yeast organism.