Trichoderma viride, the most promising biocontrol agent is able to control a wide range of plant pathogens. It is one of the most widely used species against plant disease and can improve the plant growth and crop yields. Biomass yields and sporulation of this fungus depends on the culture conditions (culture method), nutritional requirements (carbon and nitrogen source, mineral elements, carbon concentration, carbon to nitrogen ratio), together with environmental factors including water potential, pH, dark/light cycle and temperature. The study optimized the best culture conditions for biomass yields of T. viride TV-1: spore suspension on the basal medium (sucrose 19.00 g, soy peptone 4.06 g, K2HPO4 1.00 g, KCl 0.50 g, MgSO4 0.50 g, FeSO4 0.01 g and 17.00 g agar (Bactor)) for the first stage culture of 4 days under room condition for fungal growth, then they were transferred to sporulation medium (cellobiose/yeast extract, with the carbon concentration of 2 g/L and carbon to nitrogen ratio of 10:1, ZnSO4.7H2O 0.25 g/L, Na2MoO4.2H2O 0.125 g/L, H3BO4 0.05 g/L and 17.00 g Bactor) for 4 days, together with the environmental factors combination of water potential -3.9MPa/pH 8/0 h light/23°C for biomass yields, and -3.9 MPa /pH 3/0 h/23 â„ƒ for sporulation yields. These results provided important information on mass production (including biomass and spore yields) of this potential biocontrol fungus.

Increasing concern for health and environmental hazards associated with the use of chemical pesticides lead to serious consideration of sustainability in agriculture. Biocontrol agents (BCA) are promising potential alternatives to reduce the input of chemical pesticides and residues on postharvest fruits (Costa et al., 2001; Pal and Kumar, 2013). Trichoderma viride used as BCA has been reported in lots of literature (Bailey and Gilligan, 1997; Zhao et al., 1998; Ejechi, 2001; Boby and Bagyaraj, 2003; Ji et al., 2005), being the most promising BCA able to control a wide range of plant pathogens (Guo et al., 2002), but also can improve plant growth and crop yields (Kolembet et al., 2001).
Production of the BCA with large numbers of spores or conidia and low cost are the key issues for commercial application of the BCA (Wang et al., 2003). However, production of Trichoderma BCA is less prevalent till now. One of the main limitations for commercial application is the high-cost of using raw materials. Many reports mentioned low-cost agro-industrial residues, such as wheat bran (Nidheesh et al., 2015a), oat bran, grape mare, rice straw and animal/seafood byproducts (Nidheesh et al., 2015b), oatmeal (avena sativa) (Motta and Santana, 2012), which were not with defined nutrients. Few studies mentioned synthetic media for production of Trichoderma sp., (Lewis and Papavizas, 1983; Gupta et al., 1997). However, no system combination studies of nutrients and environmental were studied. At this crux, a defined nutrient together with combination of environmental factors for growth and sporulation of Trichoderma strains is necessary. The primery aim of this study was to optimize the cultural conditions to achieve the highest spores yield with defined nutrients and environmental factors.
In previous studies mentioned ealier, continuous culture on agar plates and (or) in liquid media has generally been used to study the effects of nutrition and (or) environmental factors on fungal growth and sporulation, which could not be able to define certain nutrients and/or environmental conditions for growth and/or sporulation. This study used an improve two-stage cultivation method to study the combination effects of culture conditions (nutrition and environmental factors) on fungal growth and sporulation. Differences in the optimal conditions needed for growth versus sporulation were detected. This method has also been used to determine optimal nutritional requirements and environmental factors with one-time-at-a-factor method (Gao et al., 2009b). The information is greatly important to understand their physiology and ecological characteristics such as mass production, colonization, survival, and competitive ability under field conditions.

Fungal strain
The tested fungus T. viride TV-1 was originally isolated on Alternaria alternata by Dr. G. Wang from Yunnan province in China, and was deposited in the Center of General Microorganisms Culture Collection in Institute of Microbiology, Chinese Academy of Sciences.
Materials used and Nutrition requirements for the sporulation of T. viride TV-1
The  chemicals  used  were  yeast  extract  (Sigma  Chemical  Co.); cellobiose, D-fructose, D-glucose, Tryptone, yeast extract, sucrose, K2HPO4, MgSO4, FeSO4 (Beijing Chemical Reagents Company, Beijing China); soy peptone (Shanghai Chemical Reagents Company, Shanghai China) and KCl (Nanjing Chemical Reagents Company, Nanjing China). The basal medium was the same with that of Gao et al. (2010). The optimal carbon concentration was followed by 2 g/L with carbon to nitrogen ratio of 10:1, and the combination of cellobiose/yeast extract from carbon source of cellobiose, D-fructose, D-glucose and nitrogen source of tryptone and yeast extracts were used separately (Sun et al., 2009).
Effect of mineral elements
After testing the components and concentration gradients of six mineral elements for sporulation of the isolate with one-factor-at-a-time method, the study got the optimal components for the sporulation of T. viride TV-1, including ZnSO4.7H2O - 50mg/Land Na2MoO4.2H2O- 125 mg/L.
Effect of environmental factors on sporulation of T. viride TV-1
The improved method of two-stage cultivation in plates was applied to evaluate the effects of pH, water potential, dark/light cycle and temperature on the second stage culture for 4 days on sporulation of the biocontrol fungi. Water potential including -0.3 to -7.3 MPa; pH including 3 to 9, dark/light cycle including 24 h/0 h, 12 h/12 h, 0 h/24 h, temperature of 20 to 32°C were included. The study selected two better levels of each factor for the orthogonal research. The selected levels of environmental factors are shown in Table 2 (Gao and Liu, 2009a).
Orthogonal matrix method
The orthogonal L16(215) was used to obtain the optimal culture conditions on solid for pH, water potential, dark/light cycle and temperature on the certain sporulation medium, successively, after the test of carbon concentration. The study got the best nutrition combination after full experiment was carried out (Gao and Liu, 2010), the study also tried to get the optimal combination of nutrition together with environmental factors for sporulation of T. viride TV-1 by orthogonal matrix method under selected two levels for sporulation of four environmental factors.
Statistical analysis
The data were analyzed by one-way ANOVA. Tests of significant differences were determined by Duncan’s multiple range tests at P = 0.05 using Statistical Analysis System (Version 8.2, SAS Institute, Cary, NC). 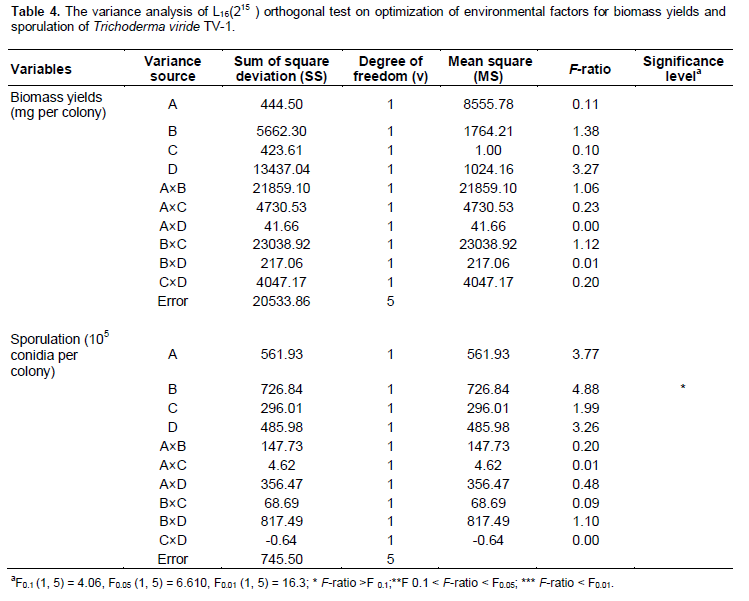 The first level the study choose was the best for sporulation of T. viride TV-1 by one-factor-at-one-time method, while after the orthogonal matrix method, the study found that certain nutrition was not combined in the first level of environment, which also means that the orthogonal method was necessary for optimizing the sporulation culture conditions including nutritional and environment factors.
Though other studies concern is mainly on the orthogonal matrix method, which focuses on nutritional components or just environmental factors, while this study combined them together. After doing the full experiment of nutrition and environmental conditions, the study used the former two levels of environmental factors with certain nutrition to optimize the culture conditions with orthogonal matrix method.
Environmental factors which have different effects on biomass and sporulation, this study cultured them under different environment conditions to get the certain yields needed, for example, biomass or spores. It is demonstrated that the combinations of different environmental factors have different effect on biomass and spore yields. On biomass production, the study found the result got by combination factors was consistent with intuitive analysis. While on sporulation, the result was not consistent with intuitive analysis. Maybe some system error took place which could not be controlled.
It has been shown that alternative nutritional components can significantly influence growth and sporulation of many fungi (Rao et al., 1997; Tigano et al., 1995; Culbreath et al., 1986). This provides opportunities to find the most effective and commercially available nutritional and environmental factors, through screening the combination of carbon and nitrogen source, carbon concentration, C/N ratio, together with environmental factors including water potential, pH, dark/light cycle, and temperature to facilitate the mass production of a potential high-virulence biocontrol isolate. This study also found that fungal biomass was not necessarily correlated with fungal sporulation under the orthogonal matrix method. This result showed the essential of two-stage method. All of this information are all important to mass production with lower cost, also reflecting some physiology on nutrients and environmental characteristics of this fungus, and also gives the essential information for its industrialization.
The soil fungistasis as an obstacle for the efficiency of biocontrol, the culture conditions can be improved (nutrition and environmental) to help overcome the soil fungistasis in order to colonize and to have better mycelia and sporulation in soil, together with combined environmental conditions, which will be a great help for biocontrol efficiency (Sun et al.,1997).