Utazi (Gongromena ratifolia) and Nchuanwu (Occimum americanus) were dried using solar dryer and open- air sun drying methods. 200 g of each sample was used. The weight losses were used to determine the reduction in moisture content. Drying was assumed to have taken place in the falling- rate period, which enabled the use of only one drying rate constant, K. Graphs of ln(M0-M) versus time were used to obtain the drying rate constants, K for the two drying conditions. All analyses were done using standard procedures. The drying rate constants for the solar dryer and open- air sun dried Utazi were 0.8 and   0.7, respectively. Similarly, the values for Nchuanwu were 0 2 and 0.3, respectively. Moisture versus time graphs of both samples showed that the assumption of one falling- rate period is justifiable. The solar dryer was more efficient and would be more appropriate to industrial application. Both the nutritional and sensory qualities of the dried products were enhanced by the process.
Key words: Drying, solar dryer, drying rate constant, drying efficiency, nutrients, open-air drying.

Drying has been recognized as the most useful processing technique for prolonging the keeping quality of solid foods including vegetables (Dissa et al., 2011). Utazi (Gongromena ratifolia) and Nchuanwu (Occimum americanus) are both vegetables and belong to the class of agricultural food products often referred to as perishables. Their common feature is that they are abundant during the peak of their respective season but thereafter, become quite scarce (Onoja et al.,  2012). They are well cherished spices especially in sub-Saharan Africa where they are widely used in preparations of various soups. They play quite significant role in our diets of the population because they are major sources of essential macronutrients, micronutrients and vitamins.  Due to their seasonal nature and high moisture content, there is need therefore, to develop an appropriate technology for their preservation so as to guarantee their availability all year round
(Eze and Chibuzor, 2008). Over the centuries, agricultural foodproducts including vegetables and spices are dried in the open-air sun or in  certain parts of the chimneys designated for the purpose (Scanlin et al., 1997). Whitefield (2002) identified different types of drying techniques including electrical drying, open-air sun drying, firewood/fuelwood drying and solar dryer method. On comparative basis, open-air sun drying ranks first in terms of cost benefit but the poorest when variables such as protection against dust, rain and wind, insect infestation, microbial attack and nutrients retention are considered (Eze and Chibuzor, 2008; Anyanwu and Okonkwo, 2008; Oparaku, 2008).
Solar drying is an appropriate technology for a sustainable environment because it has the potential for high product quality (especially for such heat labile nutrient like ascorbate), it is inexpensive and most importantly, it is environmental friendly (Ekechukwu, 1989; Yaldiz and Ertekyn, 2001). A number of complex theoretical models to describe the heat and mass transfer phenomena in the drying of agricultural products have been described (Tongrul and Pehlivan, 2004; Doymaz, 2004; Mwithiga and Olwal, 2005; Sacilic et al., 2006; Anyanwu and Okonkwo, 2008)). These researchers have studied the kinetics of solar drying of agricultural products and observed that the process occurs in the falling rate period for most fruits and vegetables.  The knowledge of drying rate constant is imperative for  accurate  prediction of drying rates according to the falling rate model. This information is very important to peasant farmers and industrial applications alike since specified levels of moisture content could be linked with a specified time in the process equation.   The objective of the study was to compare the drying efficiency between solar dryer and open-air sun drying of agricultural products.

Utazi (Gongromena ratifolia) and Nchuanwu (Occimum americanus) used for the study were purchased at Ogige market, Nsukka. Each sample was divided into two equal batches of 200 g. One batch was subjected to open-air sun drying while the second batch was charged into a passive solar dryer supplied by the National Centre of Energy Research and Development (NCERD), University of Nigeria, Nsukka. The solar dryer measuring 1025 mm × 515 mm with glass cover uses natural convection principle (Ekechukwu, 1989; Anyanwu and Okonkwo, 2008). Its North end is 845 mm high while the south end is 720 mm high. The glass cover is inclined at an angle of 7° corresponding to the local latitude. The sides of the dryer are made of plywood perforated at intervals for effective air flow. Inside the solar dryer were lined thin perforated trays in layers (Figure 1). 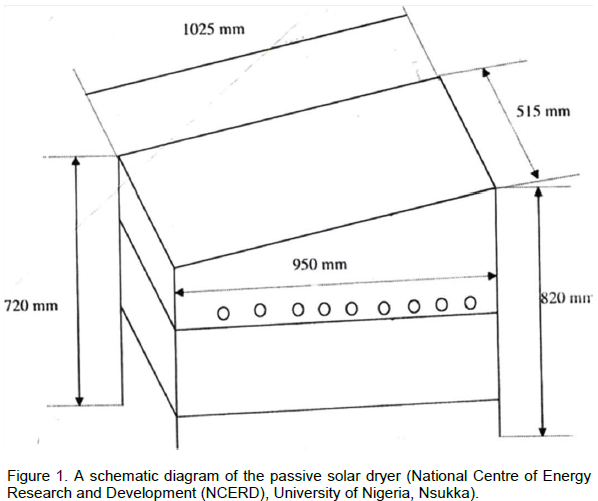 Determination of proximate composition
The proximate composition of the  samples was determined using standard techniques (AOAC, 1990). The ambient and drying chamber temperatures during the drying operations ranged between 22 to 35°C and 37 to 48°C, respectively. Samples were evenly spread during the drying operations to ensure effective drying in consonance with the thin layer model which describe the drying phenomena in a unified manner regardless of the controlling mechanism in the drying of agricultural products ( Tongrul and Pehlivan, 2004;). The initial moisture contents of the samples were 72.4 and 65.4% for Utazi and Nchuanwu, respectively. They were weighed at intervals of two hours and the moisture content was calculated from the weight loss until a constant weight was obtained when the weighing was then terminated. The samples had to be carried to a sheltered place each time it rained. Samples were kept in desiccators at nights to prevent moisture re-absorption. The drying of each sample was done in triplicate.
Assumptions and mathematical consideration
In this study, we have assumed that drying occurs mainly in the falling rate period (Uretir et al., 1996; Karathanos and Blessiotis, 1997; Lashsasni et al., 2004; Anyanwu and Okonkwo, 2008). This enabled us to use the falling rate model (Equation 1). Moreover, it has been assumed throughout this work that the drying process was continuous and took place in one falling rate period, hence we employed only one rate constant. Couson and Richardson (1977) and cited by Anyanwu and Okonkwo (2008) observed that natural convection drying in the falling rate period can be represented by the following model:

Since the negative power of e shows that M0> M and because t0 = 0, we can write:

Where, M0  is the initial moisture content (%) of the samples.
Applying the natural logarithms we arrive at:

Sensory evaluation
A -five point Hedonic scale  where 5 represented the highest score and 1 the lowest was employed to evaluate the products (soups made from the dried vegetables) for taste, flavour, texture, colour and general acceptability. A 20- taste panel randomly selected from students and lecturers of the Department of Home science, Nutrition and Dietetics, University of Nigeria, Nsukka, participated in the tasting sessions. The tasting was carried out at the department. Each judge (panel member) was seated in an individual compartment free from noise and distraction.
The soups were properly coded and served to the panelists.
Statistical analysis
The Statistical Package for Social Sciences (SPSS, version 17) was used to analyze the data. Means  ±(SD) were calculated and Analysis of variance (ANOVA) were used to test the significance of the difference . The significance was accepted at p<0.05. (Cochran and Cox, 1992).

The results showed that while the percentage moisture loss by the open-air and solar dried samples were very close at the second day, the gap widened by the end of the third day. At the end of fourth day, it could be seen that the solar dried samples had lost virtually all its expellable moisture content as against the open-air sun dried samples. Moreover, the open-air samples had to be carried into a sheltered place each time it rained. However, this did not entirely prevent its weight from fluctuating as a result of the rainfall which occurred thrice during the period of the study. This is clearly visible from the graphs (Figures 2 to 6). Furthermore, analysis of the plots of ln(M0 - M) against time (Figures 3 and 4) indicates that the rate constant for the solar dried samples are approximately 0.8 and 0.2 units per day while the open-air sun dried samples are approximately 0.7 and 0.3 for Utazi  leaf and Nchuanwu  leaf,  respectively. With these values, it is quite possible to link a given level of moisture content with a specified drying time. This could be achieved either graphically or analytically using Equation (5). 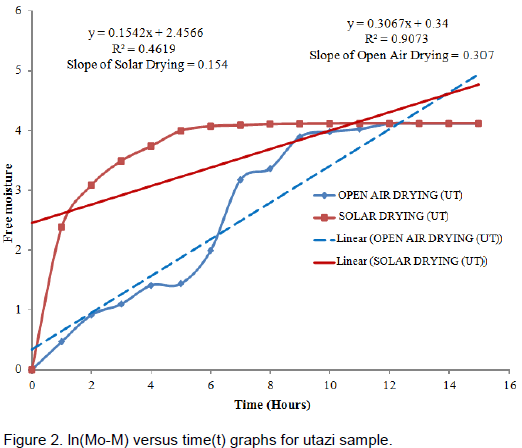 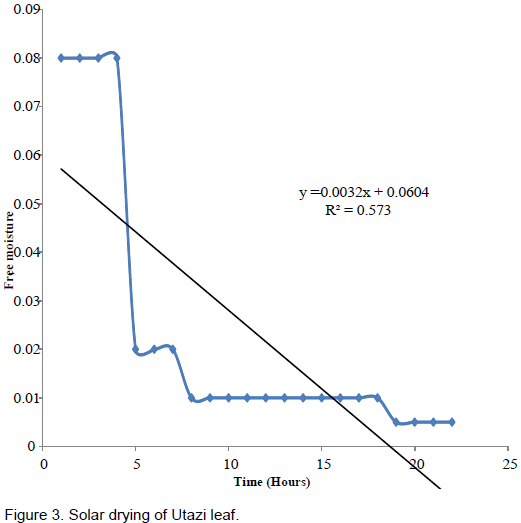 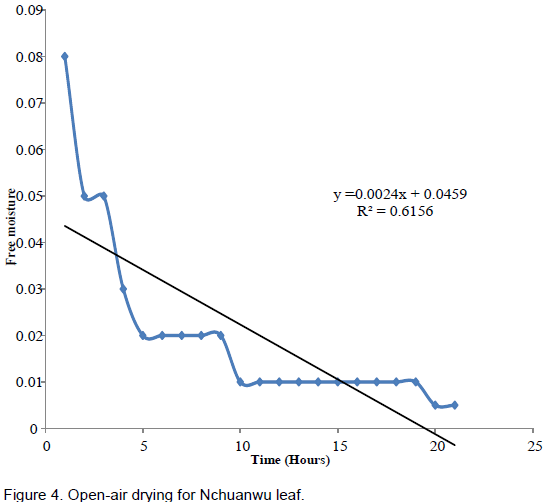 The dry basis moisture content (X) versus time (t) graphs of both the open-air dried and the solar dried samples are also presented in Figures 5 and 6. Moisture content was calculated using Equations (6) and (7). 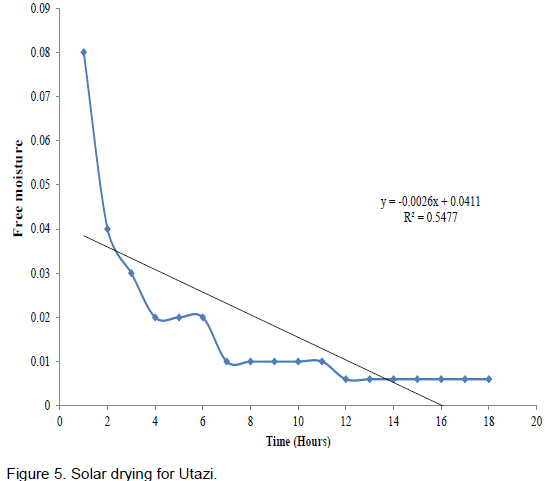 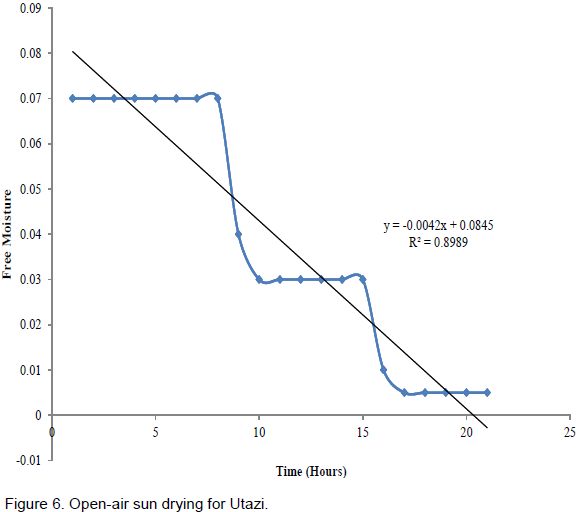 Where x* is the equilibrium moisture content (%). xt is the moisture content corresponding to time, t.(h)
Ekechukwu (1999) and cited by Anyanwu and Okonkwo (2008) observed that xt  can be derived from the equation:

Where  W = weight (g) before drying and Ws  = weight
(g) after drying.
The results also showed that drying resulted in improved proximate composition but decreased ascorbate and minerals of the samples (Tables 1 and 2).
The  sensory  attributes  of  the  soups  made  from  the dried samples were also enhanced (Table 3). 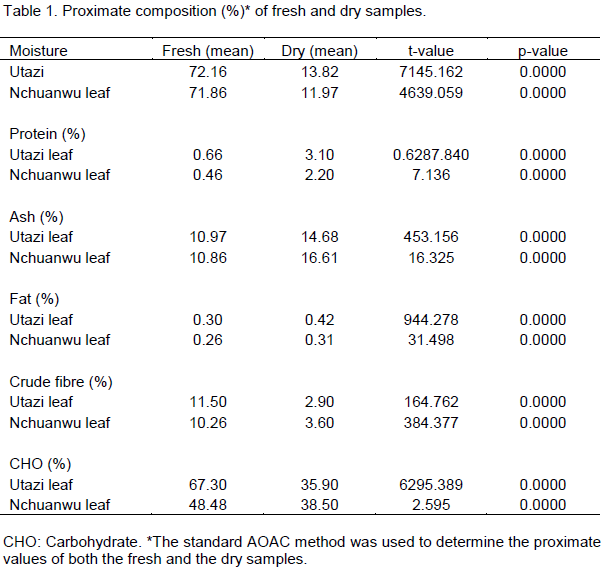 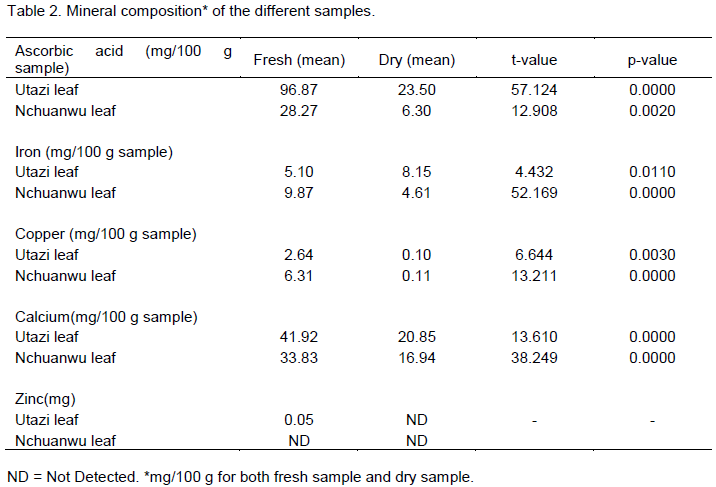 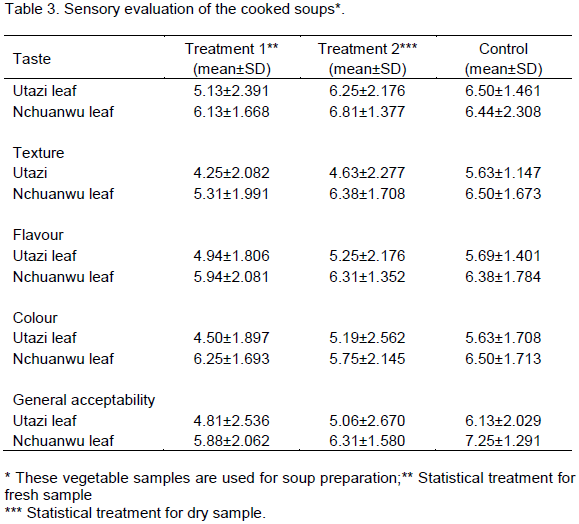 From the free moisture time graphs it is evident that there appeared to be multiple falling rate periods for each sample. However, the first rate period lasted for less than five hours in both drying techniques, an indication that the original assumption of one rate period is quite justifiable (Anyanwu and Okonkwo, 2008; Dissa et al., 2011). The above  information  is  critical  to   peasant   farmers   and industrial applications because specified levels of moisture content could be linked with a specified time in the process equation.

The study revealed the quantification of the drying rate constants, K, the drying efficiency and the nutrients and sensory qualities of the vegetable samples dried under the two drying conditions. The free-moisture versus time graphs showed that the drying took place at the falling rate period. Solar dryer was more efficient and has potential to give higher product quality than the open-air sun drying. However, solar dryer would be more costly than the open-air sun drying technique but when quality and safety are considered, the former should be better in the drying of vegetables.  Also, the study showed that drying resulted in improved nutrients and sensory qualities of the samples. The process if adopted would ensure steady availability of these vegetables all the year round.

The researchers are highly grateful to the management of the National Centre of Energy Research and Development, University of Nigeria, Nsukka for supplying the Solar Dryer used.