Erythropheleum suaveolens stem bark saponins fractions were investigated for antioxidant and antibacterial activities. In vitro systems such as, 1, 1- diphenyl-2-picrylhydrazyl (DPPH) radical, reductive potential and inhibition of lipid peroxidation were carried out to determine the antioxidant activities. The antimicrobial activity was determined using the hole-in-plate agar diffusion technique and the minimum inhibitory concentration (MIC) of each fraction was determined using the agar dilution method. All the fractions scavenged DPPH radicals but not comparable with ascorbic acid. These fractions also inhibited lipid peroxidation induced with highest percentage inhibition exhibited by 70:30 fraction which compare favourably with tannic acid. The reducing potential decreased with increasing concentration for all the fractions. The result of antibacterial studies revealed that 70:30 fraction inhibited the tested bacteria to a greater extent than the other fractions while the determination of the MIC of each fraction against the organisms showed that 70:30 fraction possessed a broader spectrum of activity against gram positive cocci of medical importance and also inhibited all the gram negative organisms tested. The study indicates saponin fractions of E. suaveolens stem bark to be potential candidates as antioxidant and antimicrobial agents with the 70:30 saponin fractions being the most promising and that these two activities augment each other.

Saponins are surface-active, high molecular-weight and chemically complex group of compounds that occur naturally in plants, to a lesser extent in lower marine organisms and some bacteria (Riguera, 1997; Yoshiki et al., 1998; Price et al., 1987). Saponins generally are composed of two major parts, one or more sugar or oligosaccharide moieties glycosidically linked to a triterpenic or steroidic liposoluble structure (aglycone or
sapogenin). The aglycone may contain one or more unsaturated C–C bonds. This combination of polar and non-polar structural elements in their molecules explains their soap-like behaviour in aqueous solutions (Tsukamoto et al., 1995; Oleszek and Stochmal, 2002). Reported pharmacological properties elicited by some isolated saponins include hypocholesterolaemic, anticarcenogenic, immunostimulant, hypoglycemic, molluscicidal, antiprotozoa, antioxidant etc (Hostettmann and Marston, 1995). Such findings raise the possibilities of exploiting plant extracts rich in these metabolites as pharmacological and veterinary products, and herbal medicines (Attele et al., 1999; Oakenfull, 1981). Saponins have found wide applications in beverages and confectionery, as well as in cosmetics (Price et al., 1987; Petit et al., 1995; Uematsu et al., 2000).
Erythrophleum suaveolens is an example of plant rich in saponins. It is a perennial tree of about 30 m in height, bole seldom straight, slightly buttressed, often low-branching and producing a dense spreading crown. It is referred to by various names by natives. It is referred to in English as sassy, sasswood, red water tree and ordeal tree. The species are of ethnological interest as ordeal poison as indicated in many of their Europeans and African names. The English ‘red water tree’ is derived from the capacity of the stem bark decoction or infused in water to turn the water red (Burkill, 1985).
The stem bark is the most interesting part of the tree being the source of most notorious ordeal poison in Africa to trial criminals accused of serious misdemeanors, or person suspected or accused of witchcraft.
Ngounou et al. (2005) in their studies on the antimicrobial activity of diterpenoid alkaloids (amide norcassaide and norerythrosua-veolide) from E. suaveolens reported that these compounds showed potent antimicrobial activities against bacteria and yeasts.
The antibacterial potentials of E. suaveolens aqueous and chloroform fractions against some selected bacterial isolates were investigated by Aiyegoro et al. (2007). The two fractions were reported to compare favourably with the standard antibiotics, streptomycin and ampicillin at concentration of 1 mg/ml and 10 μg/ml respectively.
Antioxidants are the body’s natural defense mechanisms against the damaging effects of "free radicals" and oxidation reactions that damage cells and cause disease. The main function of antioxidants is to prevent oxidation in various ways. It has been known for some time that antioxidants play a very important biological role in the body by preventing against oxidative damage (particularly oxidative DNA damage), thus preventing cardiovascular, neurological and carcinogenic diseases and delaying chronic health problems like cataracts (Williamson et al., 2000; Morton et al., 2000).
Usually, polyphenols and carotenoid pigments being the major nutritional antioxidants in food attract most of the research in this area. Some saponins have also been found to have anti oxidative or reductive activity (Francis et al., 2002). From our recent investigations (Akinpelu et al., 2012) saponin fractions from the stem bark of E. suaveolens protected red blood cells to some degree and one of the fractions (70:30) compete favourably with standard drug used in protecting the cell membrane integrity. This study is to investigate further the antioxidant and antibacterial activities of E. sauveolens fractions. This is a view to discover and explain possible mechanisms through which saponin exert its antioxidant and antibacterial activities. 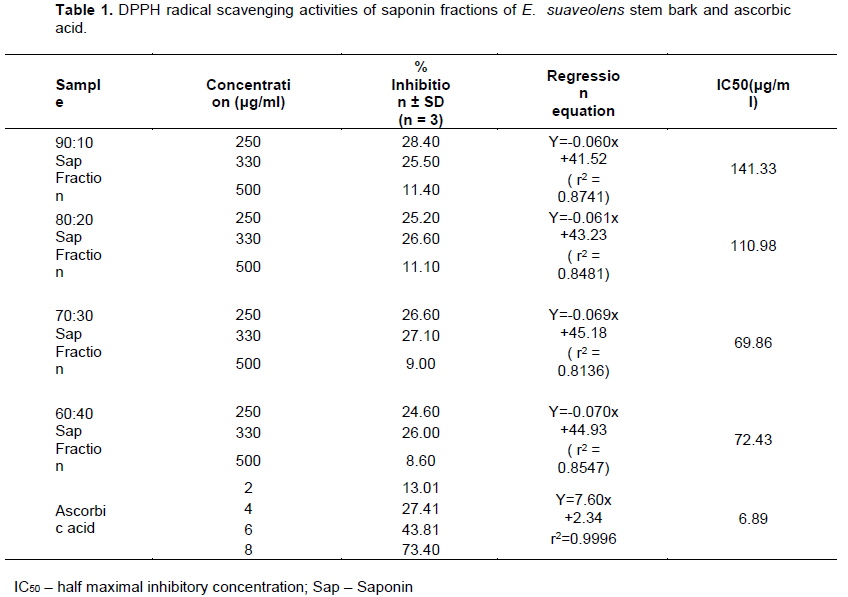 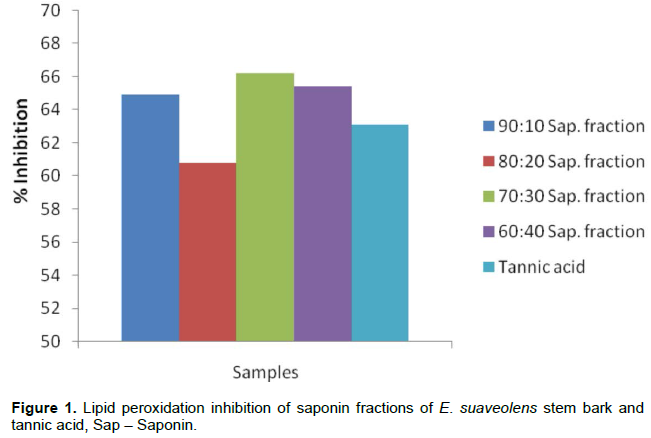 Inhibition of lipid peroxidation
Peroxidation of lipids has been shown to be cumulative effect of reactive oxygen species, which disturb the assembly of the membrane causing changes in fluidity and permeability, alterations of ion transport and inhibition of metabolic processes (Nigam and Schewe, 2000). The extract exhibited strong lipid peroxidation inhibition at 1000 µg/ml in the order 70:30>80:20>60:10>80:20 and compared favourably with tannic acid at the same concentration (Figure 2). This result suggests that E. suaveolen saponins could play a role in protecting the physicochemical properties of membrane   bilayer   from   free  radical   induced  severe cellular dysfunction. The fractions inhibit the oxygen free radicals formation and this may be one of the possible mechanisms of membrane stability activities these fractions as reported by Akinpelu et al. (2012). 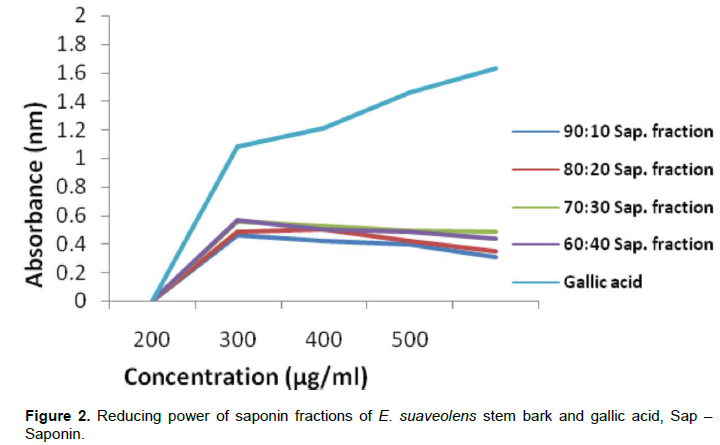 Antimicrobial studies
The zones of inhibition of the different saponin fractions of E. suavoelens stem bark to B. subtilis, S. aureus, E. coli, Ps. Aeruginosa, C. albicans and C. pseudotropicalis are presented in Table 2. The results of the antimicrobial studies of the saponin fractions of the bark of E. suaveolens revealed that it had antimicrobial activity which was concentration dependent. The determination of the zones of inhibition of same concentration of each fraction showed that all the fractions were more active against the gram positive bacteria B. subtilis and S. aureus than the gram negative organisms. All the fractions were also found to be active against C. pseudotropicalis with the exception of the 80:20 fraction while C. albicans was inhibited by the 70: 30 and the 60:40 fractions. This shows that the saponin fractions of E. 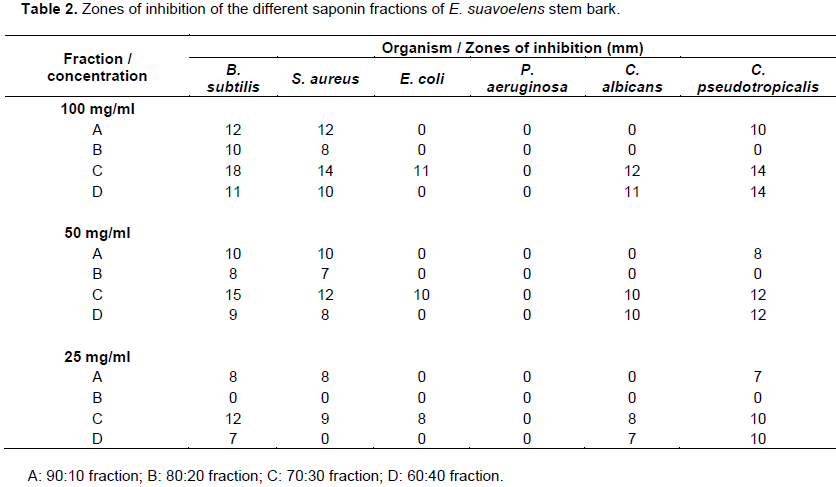 suaveolens had more activity against the gram positive organisms than the gram negative bacteria. This is expected and it suggests that the mechanism of action of the saponins in the tested fractions of the plant is related more to cell wall integrity and functions since the difference in the two groups of bacteria is in the cell wall. The cell wall of gram-positive bacteria is less chemically complex than that of the gram negative bacteria (Lamikanra, 2010) and gram-negative bacteria are known to be resistant to the action of many antimicrobial agents including antimicrobial plant extracts (Kambezi and Afolayan, 2008; El-Mahmood, 2009). The anti-staphylococcal activity of this saponin fraction is significant due to  the  fact  that  the  spectrum  of  activity included the methicillin-resistant S. aureus (MRSA) strains which are important causes of many hospital and community acquired infections (CDC, 2012; Taiwo et al., 2004).
The results of the study also showed that the 70:30 fraction inhibited the tested bacterial to a greater extent than the other fractions (Table 3). The determination of the minimum inhibitory concentration of each fraction against a wide range of organisms which included both the gram negative and gram positive bacteria as well as Candida species showed that not only was the 70:30 fraction more active, it also possessed a broader spectrum of activity against gram positive cocci of medical importance and also inhibited all the gram negative organisms tested. This included the notorious multi-resistant organism Pseudomonas aeruginosa (Bousseimi et al., 2005; Olayinka et al., 2004; Bradford, 2001). This activity was not observed with any of the other fractions. This result suggests that the antimicrobial principles in these fractions are likely to be more than one and the 70:30 fraction probably contains the most potent principles than any of the other fractions. 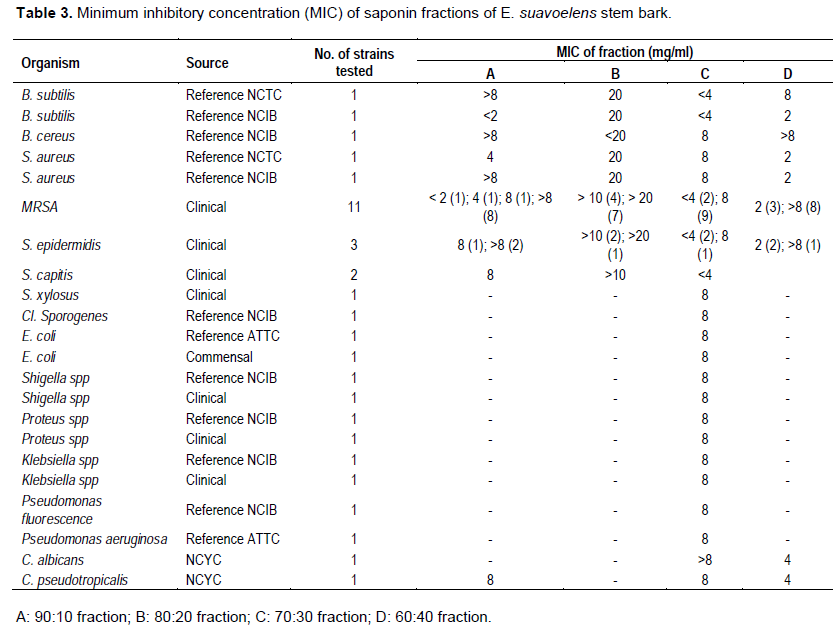 Hence it could be surmised that the E. suaveolens saponins could be used to prevent damage caused by free radicals and infections caused by pathogenic bacteria. In addition, 70:30 E. suaveolens saponin fraction stem bark could be a useful starting point if the active saponin principles are to be exploited for development into antimicrobial chemotherapeutic agents in line with the ongoing search for substances to replace the antibiotics in current clinical use which because of the emergence and spread of resistant organisms are less useful than before (Iwata, 1992; Chopra et al., 1997).