Precipitation concentration changes over India during 1951 to 2015

The precipitation concentration index (PCI) of Indian region using monthly data for 1951 to 2015 was estimated on an annual and seasonal scale to show the changes in temporal and spatial distribution of rainfall over the 34 meteorological sub-divisions. As a result, annual values of PCI showed more erratic nature than the uniform to moderate behaviour of seasonal (Jun-Sept) PCI values. Computation of PCI will be useful in hydrological, water resources as well as flood and drought management programs. As floods are more common in north and northeast India, PCI may serve as a warning tool in disaster control management in relation to floods and soil erosion since PCI can help in the analysis of soil erosion and in the calculation of erodibility of land and loss of soil due to it.

The important characteristic of the Indian rainfall is that it is mostly monsoonal. Having varied topography and large geographic extent in the tropics, the Indian climate varies substantially due to unstable monsoon and other weather conditions. About 80% of the annual rainfall is received during the monsoon months of June to September (mid May to mid October in some areas). Due to uneven distribution of rainfall, some regions experience severe floods and some drought conditions. Therefore intensity and duration of rainfall play major role in rainfall variability over the country. In addition, there are studies that showed rainfall amounts and its seasonal distribution have changed over the past few decades which are mostly concerned with the urbanization, industrial development leading to environmental changes too (Parthasarathy and Dhar, 1978; Parthasarathy, 1984; Mooley and Parthasarathy, 1984; Rupa et al., 1992; Parthasarathy et al., 1993; Pant and Rupa, 1997; Kripalani and Kulkarni, 1997, 2001 and references therein). Epochal variability and trends in summer monsoon rainfall over India on the basis of monthly data for the 1901 - 2011 was studied by Guhatakurta et al. (2015). Considering this, assessment of monthly, seasonal and annual rainfall and its spatial and temporal distribution by Precipitation Concentration Index (PCI) will be useful in evaluating monthly, seasonal contribution of rainfall to annual total.
There are number of studies on evaluation of PCI that have been carried out around the world, e.g. Luis et al. (2011) of Spain, Xuemei et al. (2011) over Xinjiang, China, Adegun et al. (2012), Iskander et al. (2014) over Bangladesh, Benhamrouche et al. (2015) in Algeria, Milan Gocic et al. (2016) of Serbia, Al-Shamarti (2016) of Iraq, Nery et al. (2017) over southeastern Brazil. However, very few studies regarding PCI mostly on regional scale are available in India, e.g. Patel and Shete (2015), Valli et al. (2013) studied PCI over north Gujarat Agro-climatic zone and Andhra Pradesh respectively. In view of the above, the present paper mainly focuses on the assessment of changes occurring in the temporal distribution of rainfall with 65-years database of monthly precipitation for identifying the monthly, seasonal and annual distributions, variations and trends in 34 meteorological sub-division of the Indian region. Precipitation concentration index (PCI) was analyzed at annual and seasonal scale to identify the pattern of rainfall over the Indian region.

Average monthly rainfall of 34 meteorological sub-divisions (Figure 1) for the period 1951 - 2015 has been used in the analysis of spatial and temporal distribution of rainfall using GIS techniques. Based on the monthly actual average rainfall for each sub-division, mean annual, and seasonal values, standard deviation (s) and coefficient of variation (CV) were calculated. Linear regression test was performed to identify the existence of any trend or persistence in the rainfall series. The seasonal (Jun-Sept) and annual PCI was estimated for these 34 sub-divisions on the basis of above rainfall data to know the concentration and variation of rainfall in each meteorological sub-division. The PCI was estimated on an annual and seasonal scale, using Modified version of Precipitation Concentration Index (PCI) to estimate the monthly heterogeneity of rainfall (Oliver, 1980). The long term variability in the rainfall amount on seasonal and annual scale was obtained through PCI and it was calculated using following equations. 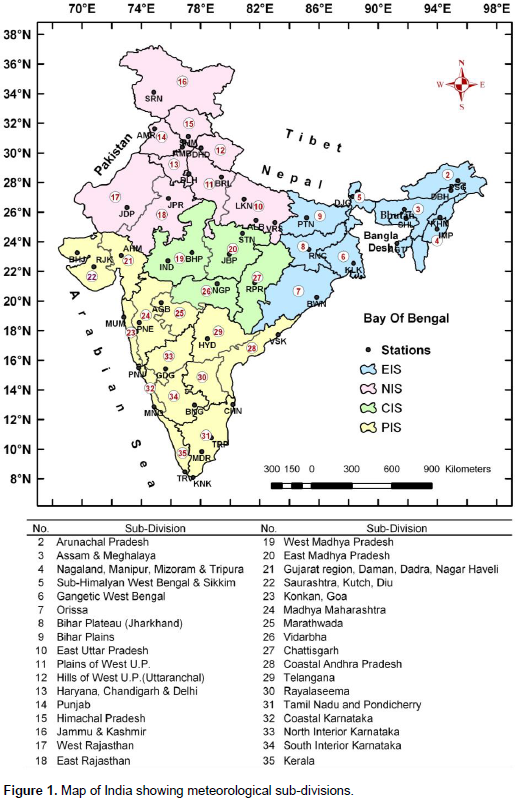 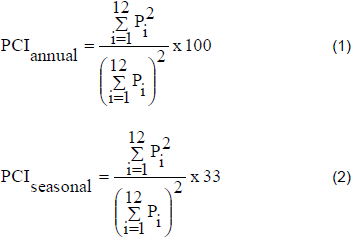 where Pi is the monthly precipitation in month i.
The number 100 in the formula for the annual PCI (Equation 1) represents 12 months of the year signifying 100% and the numbers 33 for the seasonal PCI (Equation 2) represent the four monsoon months in each season as a percentage of 12 months of the year. Table 1 gives the Oliver’s classification (1980) of PCI values. The numbers of wet and dry years were obtained using a transformed annual precipitation departure z for each sub-division as 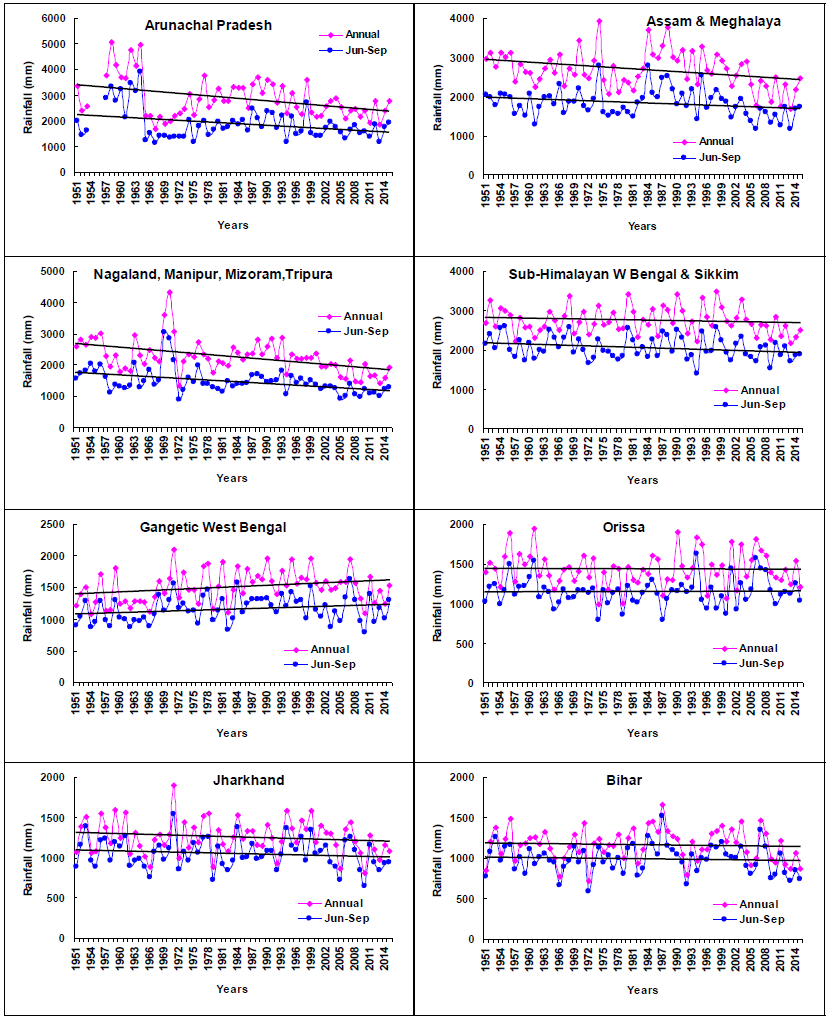 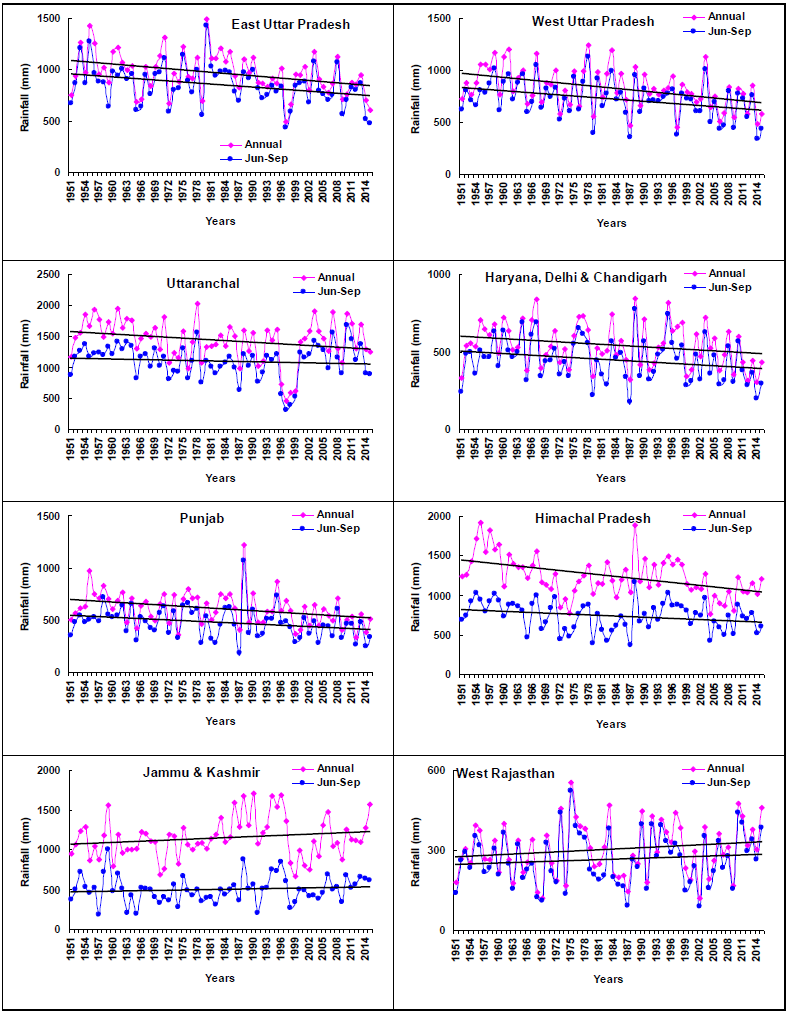 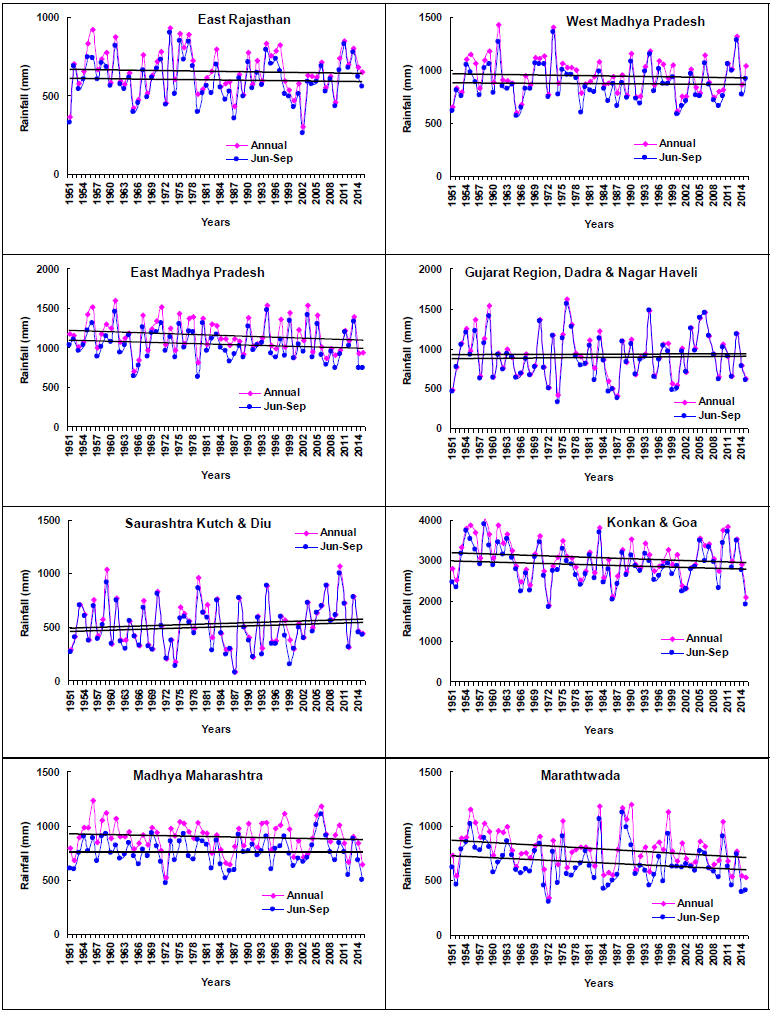 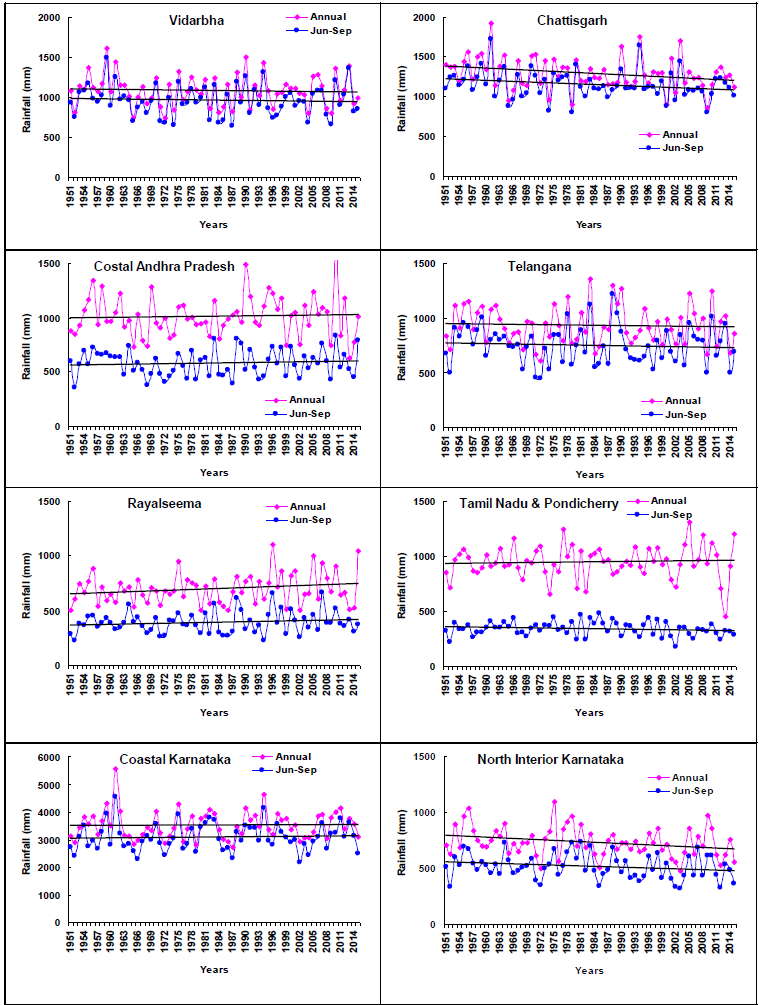 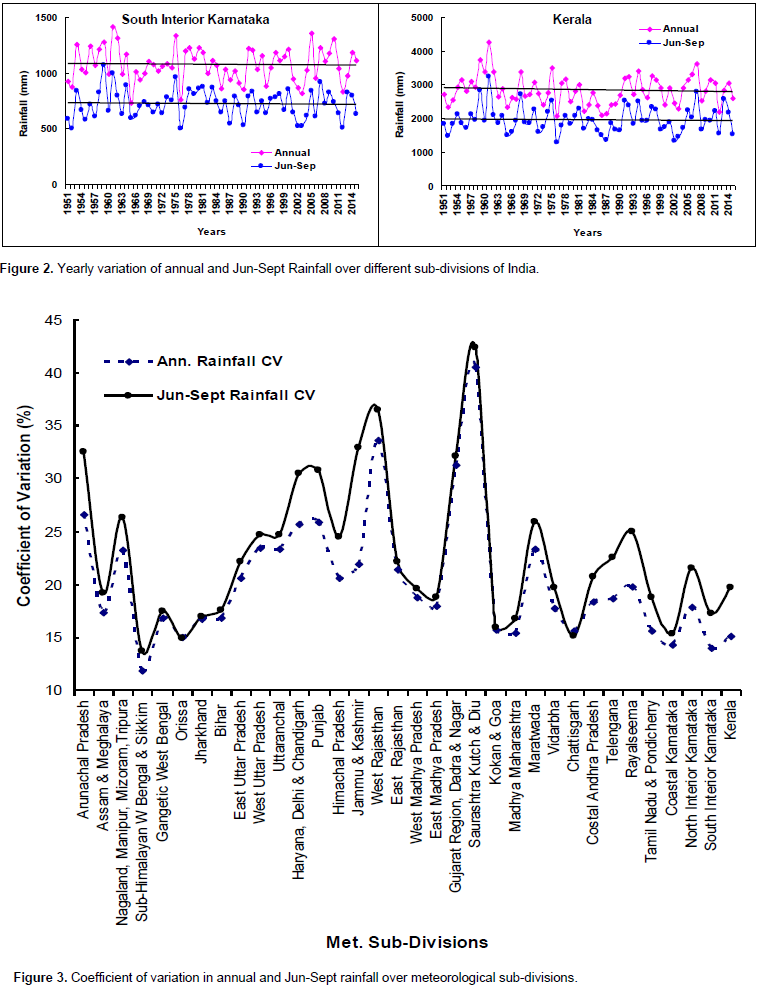 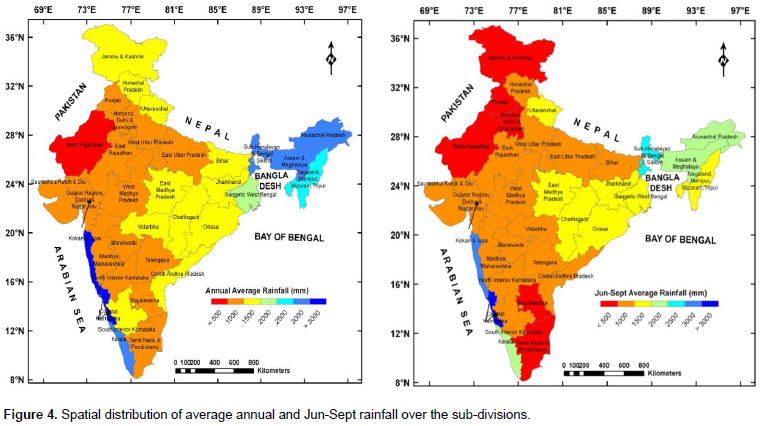 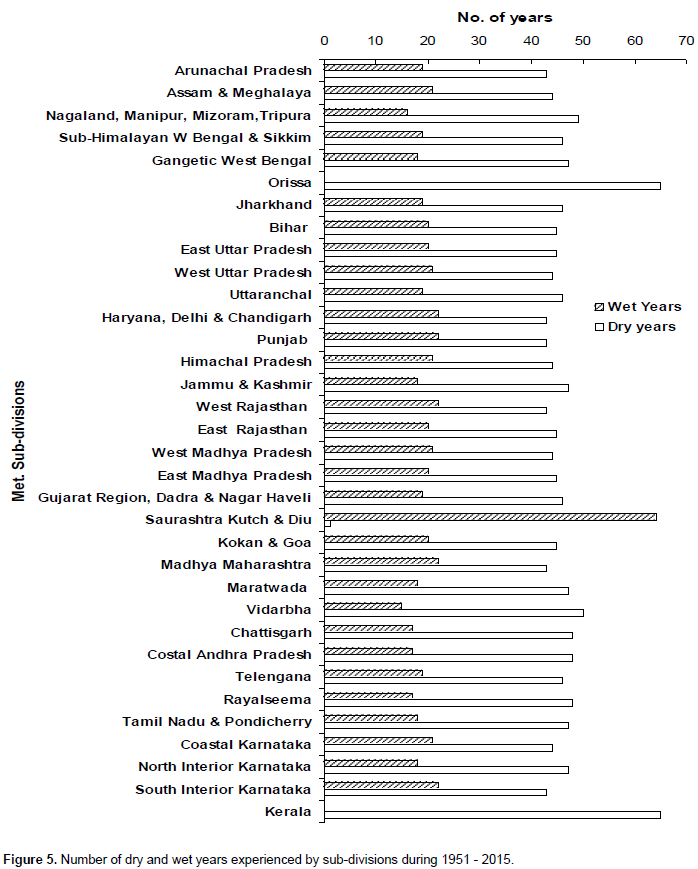 Annual precipitation concentration index (PCI)
The average annual PCI varies from 13 to 35 over the country. Based on annual and Jun-Sept. rainfall, PCI classification of meteorological sub-divisions as suggested by Oliver (1980) is given in Table 2 and spatial distribution in Figure 6a. It is seen from Table 2 that no sub-division has uniform precipitation for annual rainfall which is mostly related to orography of the country. Sub-divisions in the extreme east and extreme north have recorded moderate precipitation. 11 sub-divisions recorded irregular precipitation distribution of which four are located in the Himalayan region, four in the east coast, one in west coast and three in south interior peninsular region. The rest of the sub-divisions (that is, 19) have strong irregularity in PCI distribution (Figure 6a). Figure 6b shows the detail variation of annual PCI over the 34 sub-divisions. Highest PCI (31-35) was recorded by West Rajasthan and Gujarat Region, Dadra and Nagar Haveli, Saurashtra Kutch and Diu (Figure 6b). Annual PCI values broadly goes on decreasing from west to east. 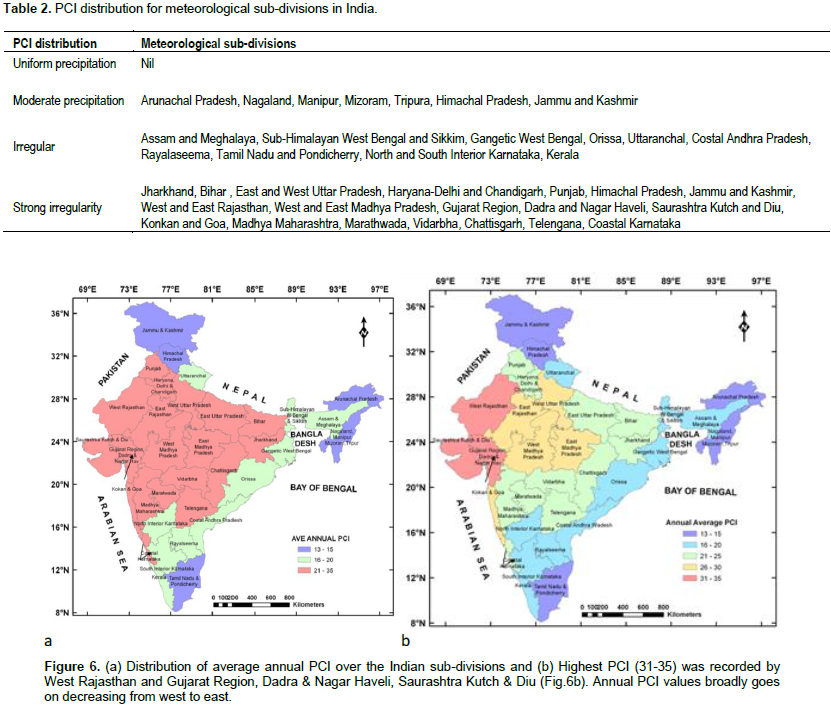 Seasonal precipitation concentration index
The average seasonal (Jun-Sept) PCI values varied between 8.7 to 12.6. As per the Oliver (1980) classification, 23 sub-divisions showed uniform distribution of rainfall with PCI < 10 and 11 sub-divisions showed moderate distribution of rainfall with PCI between 10.1 to 12.6 (Figure 7a). Detailed variation of Jun-Sept PCI (Figure 7b) showed that West Rajasthan and Saurashtra Kutch and Diu sub-divisions experienced highest PCI during monsoon months in 65 years period. Broadly, Jun-Sept PCI goes on decreasing from west to east as it is in annual PCI. 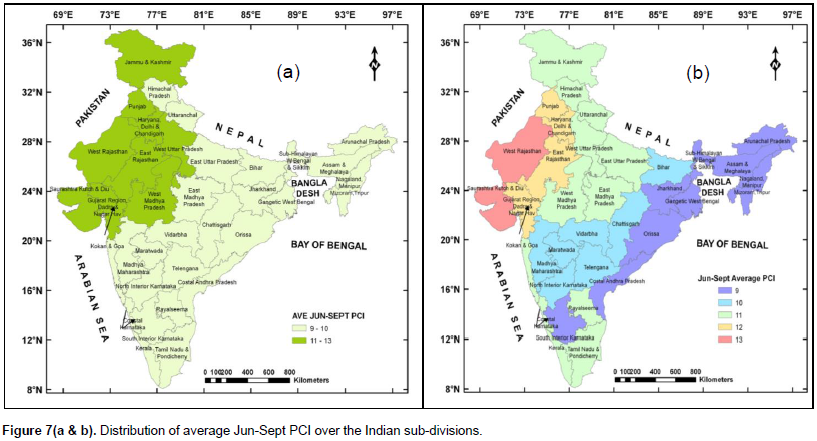 PCI during wet and dry seasons
During the wet season (Jun-Sept), sub-divisions located in the northeast India along the Himalayan ranges experienced low PCI values (that is, <10). Even during dry season also these sub-divisions recorded low PCI. Whereas higher PCI values (that is, 11 to 13) are recorded in extreme west, north and northwest India, along the west coast regions during wet and dry seasons. This can be explained as monsoon over this region is of short duration and heavy to very heavy rainfall of short duration (1 - 2 days) occurs in association with movement of western disturbances, breaks during monsoon season, cloud bursts, etc. Some years in Tamil Nadu and Rayalaseema sub-divisions also recorded high PCI values even during wet season as most of the rainfall over these sub-divisions is received during northeast monsoon season.

Being an agricultural country, information derived through spatial and temporal distribution of rainfall is very much essential for agricultural planning, flood frequencyanalysis, water resources managements, impacts of climate change on rainfall distribution and other environmental aspects (Michaelides et al., 2009 as cited in Ngongondo et al., 2011). In addition to meteorological parameters affecting rainfall during the monsoon season, impact of El Niño developing phase also affects Indian Summer Monsoon (ISM) rainfall (Pant and Parthasarathy, 1981; Keshavamurty, 1982; Shukla and Mooley, 1987; Kripalani and Kulkarni, 1997; Webster et al., 1998; Kumar et al., 1999, 2006 and references there in). In recent years global warming is another threatening cause of climate instability over the country. IPCC report (2007) mentioned about increase in precipitation in the region of north of 30° latitude for the period 1900 – 2005 (Solomon et al., 2007) relating to global warming. However, there are studies carried out in the tropical and subtropical countries showing decrease in precipitation from 1970 onwards causing severe droughts. There are indications of changes in rainfall due to increase in temperature on regional as well as global scale.
IPCC confirmed about the observational studies carried out by the Indian Meteorology Department and the Indian Institute of Tropical Meteorology on erratic trend of the monsoon rainfall during the last century. The areas of west coast, north Andhra Pradesh and north west India have been experiencing increasing rainfall while those in east Madhya Pradesh and adjoining areas, north east India and parts of Gujarat and Kerala (-6 to -8% of normal over 100 years) have been reporting decreasing rainfall trends (Valli et al., 2013). In view of this, the IPCC report (2007) suggested in-depth analysis of the sub-regional precipitation variability. This can help in identifying the areas of high and low intensities of precipitation concentration, which in turn can help in regulating the flows from high intensity areas towards low intensity areas. This can help in water resources planning and management. PCI can also help in the analysis of soil erosion and in the calculation of erodibility of land and loss of soil due to it (AghiruÅŸ, 2010). Indian region has experienced serious changes in rainfall distribution during 2001 - 2015, with five severe drought years 2002, 2009, 2012, 2014 and 2015.
Some parts of the country experienced drought for 4 - 5 years continuously which has resulted in strong discussion about the water resources management from agricultural and drinking point of view. Ladakh in Jammu and Kashmir and entire Jammu and Kashmir flooded due to cloud bursts in August 2010 and September 2014. The severe land slide in June 2013 caused unprecedented flood in Uttarakhand (Uttaranchal) sub-division. When the rest of India was reeling under severe drought condition, Assam and neighbouring region faced most unprecedented flood in July 2012. These types of disaster events catch the concentration of researcher to make more and more in-depth studies on rainfall vagaries in the past to overcome them. In fact, such large spatial distribution of rainfall is due to varied topography, associated synoptic features and wind pattern. This has resulted in irregular distribution in annual PCI values. However, broadly it has followed increase in PCI from southeast to southwest quadrant.
The 100% number of years with PCI values >16 (that is, irregular to strong irregularity in precipitation distribution) was observed in the sub-divisions of Punjab, Haryana, Delhi and Chandigarh, East and West Uttar Pradesh, East and West Rajasthan, West Madhya Pradesh, Gujarat Region, Dadra and Nagar Haveli, Saurashtra Kutch and Diu, Konkan and Goa, Marathwada, Coastal Karnataka and Kerala. Moderate to uniform concentration in rainfall distribution is seen during Jun-Sept monsoon months. It can therefore be said that changes in PCI seems to be complex phenomena and is strongly associated with the global atmospheric features such as circulation of winds, ENSO and SST phenomena, synoptic and local phenomena, etc.

Precipitation Concentration Index is an index which describes the variability in rainfall over the region providing the information about the availability of water within an environment. This information is useful in hydrological, water resources and environment management programs. It is also known that PCI is related to intensity of rainfall and soil erosion, therefore PCI can be useful in flood studies due to heavy rainfall, soil erosion studies in Himalayan regions and river catchments as well.

The authors declare no conflict of interest, financial or otherwise.

Authors are thankful to Director, IITM, Pune for his keen interest and encouragement for carrying out this study. Sincere thanks are due to the Ministry of Earth Sciences (MOES) and India Meterological Department (IMD), Pune for making available the relevant rainfall data. Authors are also thankful for learned referees for improvement in the paper. This research did not receive any specific grant from funding agencies in the public, commercial, or not-for-profit sectors.