Some medicinal plants contain natural compounds such as isoflavonoids and polyphenols that produce sterility in male animals. The aim of the present study is to investigate the effects of the chloroform extract of the seeds of Sea Island cotton, Gossypium barbadense; the ethanolic extract of seeds of soybean, Glycine max; and the ethanolic extract of the leaves of rosemary, Rosmarinus officinalis, on the fertility of male albino mice as a prelude for their usage in the control of house mice. The extraction of cottonseeds was performed by soaking and shaking, and the extraction of soybeans seeds and rosemary leaves was performed using the Soxhlet apparatus. Sperm parameters, histology of testes, and biochemical parameters of treated mice were compared with the corresponding ones of untreated mice. The oral administration of all extracts caused a significant reduction in sperm count and motility, and had severe histopathological effects on the testes. The plant extracts also caused significant decreases in the concentration of free testosterone, significant increases in the activities of alanine aminotransferase and aspartate aminotransferase, and a significant decrease in the concentration of urea in serum (except the extract of soybeans). The plant extracts tested in the present study proved to have anti-fertility effects on male albino mice, but it caused significant perturbations in the kidney and liver. These extracts could be used in the control of house mice.

Traditional poisonous methods used for the control of vertebrate pests have proved to be inefficient and inhumane. Application of such methods is also restricted in many places such as food stores, hospitals, and human habitations. All of these limitations have forced pest managers to look for non-lethal alternatives. One of these alternatives is the use of antifertility compounds. This approach aims at reducing the population growth of nuisance animals through the reduction of natality rather than the increase of mortality (Miller, 2002).

In their review of wildlife fertility control, Fagerstone et al. (2002) listed many compounds that proved to induce sterility in vertebrate pests such as synthetic steroids, estrogens, progestins, androgens, and natural plant extracts. Studies carried out on natural plants have indicated that many medicinal herbs have successfully induced sterility in experimental animals including rodents (Oderinde et al., 2002; McNeil et al., 2003; Olabiyi et al., 2006). Some of these plants target the fertility of females by inhibiting ovulation, preventing implantation, or inducing abortion. Some others target the fertility of males by disrupting spermatogenesis, coagulating semen, or destroying sperms (Trishna et al., 2010; Kumar et al., 2013).

The aim of the present study is to evaluate the effects of the extracts of some locally available plants in Egypt on the fertility of male albino mice. The botanical materials tested are the seeds of Sea Island cotton, Gossypium barbadense; the seeds of soybean, Glycine max; and the leaves of rosemary, Rosmarinus officinalis. The results would be greatly helpful in choosing the proper antifertility plant extract(s) to be used in the control of the commensal house mouse, Mus musculus.

The albino mice were humanely treated in accordance with the principles of laboratory animal care of the National Institute of Health (NIH publication No. 86-23, revised 1985). The study design including treatment of experimental animals was approved by the Research Ethics Committee of the Faculty of Science, Ain Shams University (9/2018) prior to the commencement of the study.

The extraction of cotton seeds was carried out by soaking and shaking. One hundred (100) grams of cotton seeds was soaked in 300 ml chloroform in a conical flask with continuous shaking for 36 h at room temperature using SK-0330-pro shaker. The solvent containing the plant extract was separated from the solid residue by filtration through Whatman No. 1 filter paper. The solvent was removed under vacuum using R-215 vacuum rotary evaporator; thereafter, the crude concentrated extract was weighed and kept at 4°C until used. The extraction of soybeans and rosemary leaves was carried out by Soxhlet apparatus according to the method of Freedman et al. (1979). One hundred (100) grams sample of the plant material was chopped into small pieces. Ethanol (75%) was used as a solvent at a ratio 3 ml solvent/g plant material for 36 h extraction period. The alcohol extract of each sample was evaporated to dryness under vacuum using R-215 vacuum rotary evaporator. The crude residue was then weighed and kept at 4oC until used.

Twelve-week-old Swiss albino male mice were purchased from the National Research Centre, Cairo, Egypt. Mice were provided with the standard diet and water ad libitum. The animals were left for one week before treatments for acclimatization at 22±2°C and 40- 60% humidity with natural light and dark cycle.

At the end of treatments, mice were anesthetized by isoflurane. The blood was collected into clean non-heparinized test tubes, left to coagulate at room temperature and then centrifuged at 4000 rpm for 20 min at 4°C. The serum was separated at once, divided into aliquots, and stored at -80°C until used for biochemical assays.

The body weight of each mouse was recorded before and after treatment. The testes were dissected out and weighed after removing the blood and adhering tissues. The epididymis was removed, perfused in 2 ml of isotonic saline solution, and cut with scissors to release sperms. The sperm suspension was incubated for 15 min at 38°C, followed by a determination of the sperm number using a hemocytometer and expressed as 106/ml.  The same sperm suspension was used for assessing the sperm motility by light microscope (Oliveria et al., 2014).

The activities of serum alanine aminotransferase (ALT) and aspartate aminotransferase (AST) were estimated colorimetrically using Biodiagnostic kit (Cairo/Egypt) following the method of Reitman and Frankel (1957). The serum testosterone level was assayed by ELISA kit (Diametra, Italy) and the serum urea was estimated using a commercial colorimetric assay kit (Spectrum, Egypt) as described by Fawcett and Scott (1960).

Small pieces of the testes were fixed in Bouin’s solution for 24 h. The tissues were dehydrated in ascending series of ethyl alcohol and then cleared in terpineol for three days. Pieces of the testes were embedded in blocks of paraffin wax after three changes in the wax, one hour each. The paraffin blocks were sectioned at 5 µm and mounted on clean slides. The sections were stained with Harris haematoxylin and eosin.

The three plant extracts in the present study insignificantly decreased the mean body weight and relative testes weight of treated mice compared with the control group. The chloroform extract of cotton seeds caused a highly significant decrease in the sperm count and motility (Table 1). The administration of cotton seeds into rats damaged both the mitochondria and flagella of testicular and epididymal spermatozoa and decreased sperm ATP content with concomitant loss of motility (Ke and Tso, 1982). ATP is critical for normal spermatozoan forward progressive movement and a slight decrease in its content would lead to the inhibition of sperm motility (Singla and Garg, 2013). The ethanolic extract of soybeans caused highly significant decrease in sperm count and significant decrease in sperm motility (Table 1). The negative effect of soybeans on the fertility of mice could be attributed to the presence of some isoflavonoids which are almost exclusively produced by members of the bean family; Fabaceae. Many of these natural compounds act as phytoestrogens in mammals (Zeriouh et al., 2014) and are known to decrease the reproductive ability of males (Branham et al., 2002). Such compounds affect the male fertility through decreasing the level of follicle stimulating hormone (FSH) which is essential for spermatogenesis. The decrease in FSH causes a decrease in adenylate cyclase enzyme and a decrease in androgen binding protein. The result is that the testosterone hormone could not be guided to seminiferous tubules (Adeeyo et al., 2011, Modaresi et al., 2011). The ethanolic extract of rosemary also caused a highly significant decrease in sperm count and significant decrease in sperm motility (Table 1). Similar results have been documented by several authors (Heidari-vala et al., 2013; Nusier et al., 2007). The antifertility effects of rosemary could be attributed to the rich contents of diterpenoids such as carnosic acid and carnosol (Mena et al., 2016). These compounds have antiandrogenic activity and reduced the fertility in male dogs (Bhargava, 1989). Rosemary extract also reduced the FSH and testosterone. Decreased androgen production would be reflected by a decrease in the number of mature Leydig cells and their functional status (Nusier et al., 2007). Contrary to the previous findings, the oil of this plant had beneficial effects on the male reproductive system of boars (Superchi et al., 2016).

All extracts caused a highly significant decrease in the free testosterone level (Table 2). In the cotton seeds, this effect was attributed to gossypol (Itodo et al., 2020). Studies on rats and deer have referred to the inhibitory effect of this compound on testosterone production by Leydig cells through affecting pregnenolone, the precursor of testosterone formation (Gizejewski et al., 2008). It has also  been shown  that  gossypol  had interfered  with key steroidogenic enzymes such as 3α- hydroxysteroid   dehydrogenase   (which   catalyzes   the reversible conversion of 3α-androstanediol to dihydrotestosterone) and 5α-reductase (which catalyzes the reversible conversion of   dihydrotestosterone to testosterone) in rat testis (Moh et al., 1993). In case of soybeans, this effect was due to isoflavones that inhibit 17-β-hydroxysteroidoxireductase enzyme which is needed for synthesis of testosterone (Margo et al., 2019). In case of rosemary extract, the reduction in testosterone was also attributed to the diterpenoids carnosic acid and carnosol (Mena et al., 2016).

Serum urea was significantly elevated in mice treated with the ethanolic extract of soybeans. However, the extracts of cotton seeds and rosemary significantly decreased the urea (Table 2). This effect might be due to the fact that soybeans contain high-quality proteins (Rafieian-Kapaei et al., 2017). Excess dietary proteins are not stored in body tissues, but are degraded to urea and other waste products (Dickerson, 2016). Urea is produced from the metabolism of protein in liver tissue. The low concentration of urea supports the hepatotoxicity results and elevation of ALT activity seen in the cotton seeds and rosemary groups (Wang et al., 2014).

Histopathology of the testes 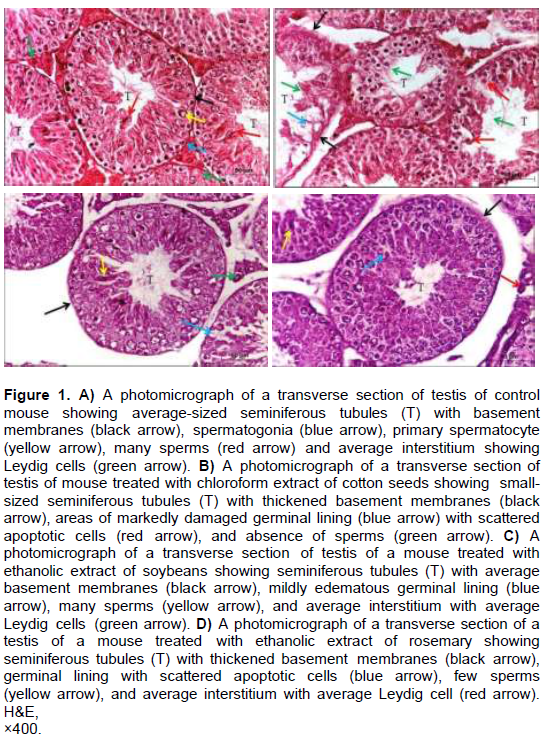 The chloroform extract of cotton seeds, the ethanolic extracts of soybeans and rosemary leaves had negatively affected the fertility of treated mice since they decreased sperm count, sperm motility, and the concentration of free testosterone, and caused histopathological changes in the structure of testes, in addition to some perturbations in the liver and kidney functions. The results of the current study are crucial for launching further prospective studies investigating the potential of these botanical extracts in the control of the commensal house mouse.