West African Dwarf (WAD) sheep is owned in small stock by rural peasant farmers in southwestern Nigeria. It is an integral part of family units, features prominently in socio-cultural functions and as emergency source of fund. It is versatile and genetically-adapted to the zone where the basic conditions of its well-being are not compromised (Petazzi et al., 2009). This native livestock is not favored in industrial animal agriculture because of the characteristic small body size and low productivity. However, its tolerance to diseases and seasonal fluctuations in food and water availability are qualities that can be exploited in industrial animal agriculture.

The genetic quality of this livestock species is under threat of erosion by industrial breeds such that their morphologic and genotypic characterization is essential (FAO, 2011). Consequently,  a  lot  of  studies  had  been carried out in the area of morphological characterization (Salako and Ngere, 2002; Yakubu and Akinyemi, 2010; Yakubu and Ibrahim, 2011). Unfortunately, the morphological characteristics do not correspond to the genetic characteristics of blood protein and non-protein polymorphisms because the traits are complex in their mode of transmission and are influenced by the environment (Tsunoda et al., 2010). Blood protein characterization therefore may present higher accuracy procedures for a better measurement of genetic variation in sheep breeds because of their polymorphisms and simple mode of inheritance.

Blood protein characterization using electrophoretic method has been used as a tool for studying relationships among farm animals (Sun et al., 2009; Shahrbabak et al., 2010) and genetic differentiation among breeds and in phylogenetic studies (Ibeagha-Awemu and Erhardt, 2004; Camoglu and Elmaci, 2005). Although DNA-based technologies are now in vogue for genetic characterization, the analysis of genetic markers based on blood protein and non-protein variants remains useful because of its utility, ease, cost, amount of genetic information accessed, simplicity of data interpretation (Arora et al., 2011) and because genetic research in Africa is less fully developed as in Europe (Gifford-Gonzalez and Hanotte, 2011).

Among these, blood proteins is haemoglobin which is the red oxygen carrying pigment in red blood cells of vertebrates. It is a conjugated protein with two pairs of identical sub-units, each with a cleft that contains iron-porphyrin group which is the site of oxygen uptake and release. Osaiyuwu and Salako (2018) found two genotypes of Hb comprising 72% HbAA and 28% HbAB in WAD sheep while Dafur et al. (2019) reported 100% HbAA. Mabruka and Ahmed (2018) reported 22% of HbA and 78% of HbB as gene frequencies of alleles A and B in WAD sheep. While several other research reports are available on the influence of haemoglobin genetic types on disease resistance, ovulation rates and blood traits in local and exotic breeds of sheep (FAO, 1988; Di Stasio, 1997), little had been done on its relationship with Mendelian traits. It is therefore, the objective of this study to investigate the haemoglobin genetic types and its association with some qualitative traits in WAD sheep.

The Modified Stratified Sampling Technique (MSST) was adopted for the choice of sampling sites within Ekiti State, Nigeria and the animals sampled within the sampling sites. A total of 280 adult sheep comprising 140 rams and 140 ewes aged 4 years were used for the study. The age of the sheep was estimated using permanent teeth eruption (Gerald, 1994). In all the sampling sites, the animals were managed extensively and fed with kitchen wastes only when available.

Data were collected on Mendelian traits  such  as  the  horn  status, wattle status and hair length on sex basis as described by Akinyemi and Salako (2010). Blood samples were collected from the adult sheep of both sexes by jugular venipuncture into well labeled Bijou bottles containing a speck of ethylenediaminetetraacetic acid (EDTA) as anticoagulant. Plasma and erythrocyte samples were separated from the heparinized whole blood by centrifugation. After centrifugation, red cells were washed three times in saline solution (0.155 M NaCl), and lysed with a four-fold volume of distilled H2O to release haemoglobin. The separated lysate was stored at 4°C prior to laboratory analysis.

Gel electrophoresis was carried out on cellulose acetate strips to analyze inherited biochemical differences at haemoglobin (Hb) locus. This involved the use of Tris EDTA Borate at pH 8.6 for haemoglobin as described by Riken (2006). The resultant gel was stained with Red Ponceau stain to visualize the protein bands. The frequency of the allele corresponding to each band was estimated by direct count. 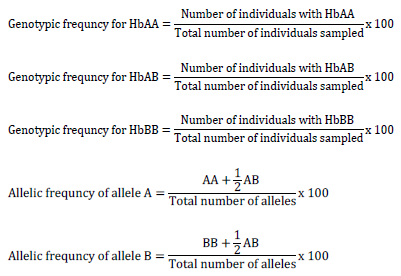 Data on Hb alleles and genotypic frequencies were subjected to Chi-square goodness of fit (one sample test) to know whether the data conform to Hardy-Weinberg equilibrium using the formula:

where O denotes the observed data and E is the expected value.

The degree of heterozygosity was calculated as the expected proportion of heterozygotes in a population under Hardy-Weinberg equilibrium.

The PROC GLM and PROC T-test procedures of SPSS (1989) were used to analyze the effects of haemoglobin variants on the Mendelian traits in the WAD sheep.

The preponderance of HbAA (52%) genotype can be attributed to an adaptive feature for survivability of the breed as reasoned by Agaviezor et al. (2013) that HbAA has a selective advantage in small ruminants. Also, Tella et al. (2000) reported that the HbAA genotype has selectable advantage in sheep at higher altitudes because its frequency increases towards the forest zone in the Southwestern, Nigeria. The HbAA is more preponderant in rams than in ewes while the HbAB and HbBB are more in ewes which is contrary to the report of Agaviezor et al. (2013) meaning that sex has an effect on the distribution of Hb types in WAD sheep. The

at 0.22 is an indication of the level of genetic diversity at the Hb locus in the investigated sheep population. The estimated degree of heterozygosity (0.47) falls within the 0.30 and 0.80 range reported by Takezaki and Nei (1996) to be appropriate for markers to be used for measuring genetic variation. The rate of inbreeding was low and is in line with the high degree of heterozygosity value, suggesting that the sheep population could be undergoing assortative mating or may be experiencing a Wahund effect.

Comparison of observed and expected allelic frequencies is a test of the fulfillment of the conditions on which Hardy-Weinberg equilibrium depends. These conditions are random mating among the parents of the individuals observed, absence of migration and mutation which were not fulfilled in this study. This result is consistent with the reports of Musa et al. (2016) but contradicts the observation of Imumorin et al. (1999). The uniformity in hair length within the same sex among the different genetic types indicates that hair length was not dependent on the heamoglobin genetic types.

The hair length showed sexual dimorphism being longer in male than female which agrees with the observation of Akinyemi and Salako (2010). However, the hair length at 9.27±4.39 and 4.84±1.28 cm for ram and ewe, respectively reported by Akinyemi and Salako (2010) were shorter than the values obtained in this study while their postulation that animals with AA haemoglobin type would have longer hair than the other genotypes was not upheld.

The trend observed in the distribution of haemoglobin genetic types in association with wattle in WAD-sheep shows no indication that the different genotypes affect either the presence or absence of wattle in the population. Also, the status of wattle was not sex influenced as it was found in both rams and ewes.

Haemoglobin polymorphisms in WAD sheep is defined by two alleles, ‘A’ and ’B’ with the

was 0.375. The hair length showed sexual dimorphism with longer length in male than female. However, the haemoglobin genetic type did not influence the trait. The status of wattle is not sex influenced as it occurred in some rams and ewes.