Clothing and textile products are the basic materials we use every day and provide physiological and psychological comfort. Towel fabric is a kind of warp pile fabric  also known as Turkish towel. As one type of warp yarns forms a loop on the fabric surface, while the other type forms the ground fabric together with the weft yarn (Patil, 2015). The low-tension warp threads is woven into the fabric in such a way as to form loops on both sides of the surface. These may be "single loop terry" or "double loop terry," depending on whether one or two strands are woven together to form loop. The loop piles, increase  the surface area and determine the rate and amount of water absorption. Double loop towels tend to be more absorbent than the single loop towels (EC60-1144 1960). The pile structure is one of the most important features of the towel because it has a significant effect on the structure and end-use properties of towels such as water absorption, air permeability and softness. Raw materials and pile height to be used for weft, ground warp and pile warp yarns are key parameters for design features. The properties required for yarns in towel fabrics are high absorbency, high wet strength, good washing  ability  and soft handle (Petrulyte and Baltakyte, 2008).

Air permeability is an important feature of fabrics (Sundaramoorthy et al., 2011) and is one of the main factors affecting the thermal comfort of the user (Angelova et al., 2013). ASTM D737-75 defines air permeability as air the rate of air flow passing perpendicularly through a known area under a prescribed air pressure differential between the two surfaces of a material (ASTM D737-96 1996). In summer, atmospheric heat and sweat transfer from the human body is mainly due to the permeability of the clothing material; for this reason, a highly permeable material is preferred. Winter clothing, however, should be less permeable to protect the human body from cold weather (Sundaramoorthy et al., 2011). In some products, such as tents, sleeping bags, etc., low air permeability is required to provide comfort for the wearer. Towel fabric require high air permeability for bathing gown and slippers (Petrulyte and Baltakyte, 2008, Singh and Verma, 2016). Warp and weft density are seen as the most important features affecting air permeability. The ability to limit or permit passage of airflow through the fabric depends primarily on the thickness, porosity, structure and geometry of the fabric. Air permeability increases with an increase in porosity and a decrease in the thickness of the fabric (Singh and Verma, 2016). The porosity is related to structural and geometric properties such as the type of yarns, warp and weft density, thickness etc. It determines thermal insulation efficiency and thermal comfort of garment (Angelova et al., 2013). Pile height has a significant effect on air permeability capacity of towel fabrics. Petrulyte and Baltakyte (2008) have investigated air permeability of various terry fabrics regarding the finishing process. They said that the pure linen terry fabric after such a finishing process exhibited higher air permeability then the linen/ cotton terry fabrics (Petrulyte and Baltakyte, 2008). Durur and Oner (2013) have investigated on the comfort properties of the towel fabrics and have found that an increase in pile height causes a decrease in air permeability rate and this decrease is important statistically.

Cotton and bamboo/cotton double loop towel fabrics were chosen in this study. Cotton fiber is the most used natural fiber in the towel production. Bamboo fiber is also used frequently in the production of towels in recent years. Cotton fiber towels have high absorbency and softness. Bamboo fiber began to be commonly used in textiles in recent years. Since bamboo contains bamboo extract, a substance called “Bamboo kun”, it is difficult for disease-inducing organisms or insects to affect this plant. The natural antibacterial elements in the bamboo fiber keep the bacteria away from the bamboo fabrics. Therefore,   bamboo   is   grown  naturally,  without  using pesticides (Wallace, 2005). Bamboo fiber is a regenerated cellulosic fiber. Bamboo fiber is softer than cotton. It has a much better moisture absorption and air permeability with various micro gaps and micro holes (Hussain et al., 2015; Das, 2018; Gökdal, 2007). Bamboo fiber garments can absorb and evaporate human sweat in a split second, as if they were breathing. Bamboo fiber makes it suitable for anti-ultraviolet natural summer clothes. Bamboo fiber products are environmentally friendly and biodegradable.

A review of the literature revealed that previous studies mainly concentrated on the investigation of water absorption properties of terry towel fabrics, while only a limited number of studies analyzed air permeability properties. The aim of this study investigate air permeability of bamboo/cotton and cotton towel fabrics produced with different pile heights; and analyzed the effect and significance level of pile fiber type and pile height on these two types of terry towel fabrics.

Bamboo, which is used as pile yarn in bamboo/cotton towels, is extracted in the form of fiber and is converted into yarn in factories. In manufactured terry towel fabrics, 100% cotton (36.87 tex) weft yarn; 100% cotton (29.5/2 tex) warp yarn; and 100% cotton (36.87 tex) and 100% (36.87 tex) bamboo pile yarn were used. Terry towel fabrics were manufactured in a 3-weft system weaving machine at 6 different pile heights with constant densities of 17 weft/cm and 13 warp/cm. Table 1 indicates unevenness and strength properties of cotton and bamboo pile yarns used in towel fabrics. Every item listed in the table is described under the table. Table 2 indicates pile height values of towel fabrics. For pile heights, sub index references from 1 to 6 were used and the codes are presented in Table 2. These codes are also used in Figure 1. 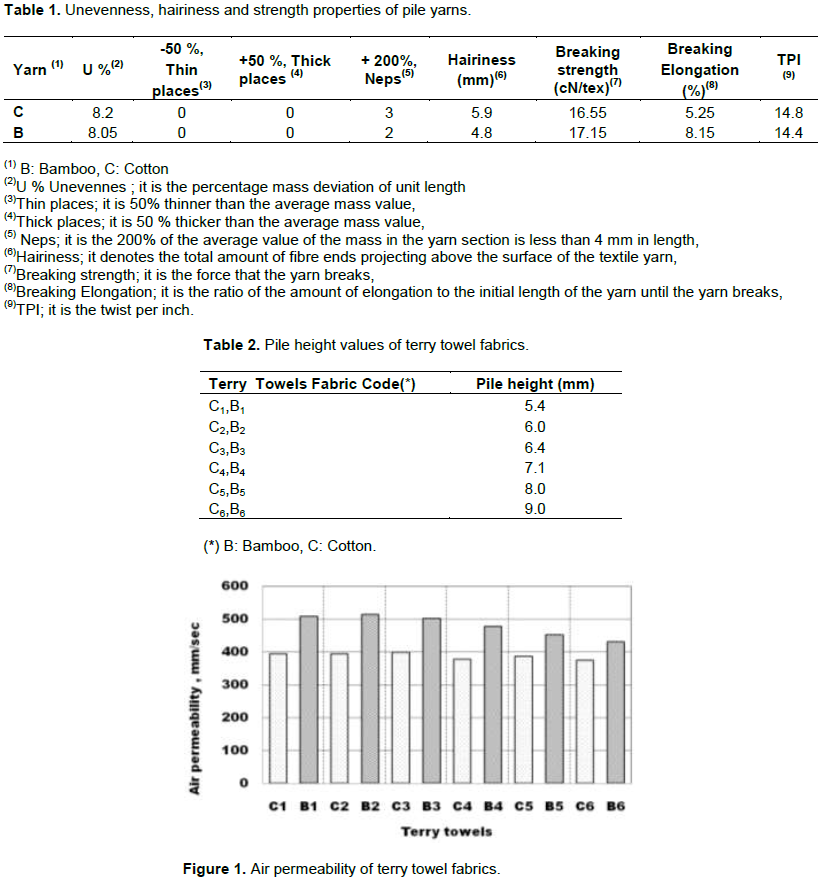 Terry towel samples were conditioned under standard atmospheric conditions for 24 h (TS EN ISO 139 2008). Air permeability of the fabrics was measured using a Textest FX 3300 device (TS 391 EN ISO 9237 1999). Analysis of variance (ANOVA) was used to analyze interactions among independent variables and how these interactions impact the dependent variable. Relationships among variables were evaluated with one-way Anova (Field, 2005). A one-way ANOVA  compares the means of two or more groups for one dependent variable (Ross and Willson, 2017). Experimental test results were used to formulate predictive equations for air permeability. One-way analysis of variance (ANOVA) was performed on the test results (at a significance level of 5%).  The experimental data were analyzed by using Design Expert 6.01 statistical software.

Air permeability test results for terry towel fabrics are presented in Figure 1. The results of analysis of variance are presented in Table 3. The air permeability of bamboo/cotton towels was found to be higher than that of 100% cotton towels. As pile height increased, the air permeability of towel fabrics decreased. Abd El Hady (2018) has also achieved similar results in his work. The reason  for  the  decrease  in  air  permeability  is  that the amount of air that can pass through the air in the high pile height is less than in the low pile height. (Abd El Hady, 2018; Durur and Öner, 2013). It was found that the interaction of pile fiber type (Yp) and pile height (PH) had a statistically significant effect on air permeability; coefficient of determination, R2 value was  0.9089. R2 is a measure of how well a model fits a data set. R2- squared coefficient generally takes a value between 0 and 1, where 1 equates to a perfect fit of the model (Pentreath, 2015). As R2 approaches 1, the model is stronger and explains the data correctly. This indicates that there was a good agreement between the experimental  value of air permeability and the predicted one from this model. Pile fiber type, pile height and the interaction of these two independent variables explained 91% of the variability in air permeability. Statistical analyses indicated that independent variables had a significant effect on air permeability (p<0.0001) (Table 3). Because the p-values are smaller than 0.05, the independent variables have significantly contributions on model. p-value is the probability that the results of the study being due to only chance. If the p value is less than 0.05, the results are said to be statistically significant, conversely results are said to be not statistically significant when the p value is greater than 0.05. (Glasziou et al., 2009).

The results indicate that:

(iii) As a result of this study, it was possible to predict  the air permeability of terry towels, before the production of the terry towels by using obtained regression equations.

The author has not declared any conflict of interests

Author would like to extend his gratitude to HATEKS A.S. who provided for weaving the fabrics to the Republic of Turkey Ministry of Industry and Trade Small and Medium Enterprises Development Organization (KOSGEB) Istanbul Textile Quality Control Laboratories for making it possible to carry out the fabric tests in the laboratory.