Reiter's syndrome presenting with lumbar and leg pain as the chief complaint: A case report and literature review

Reiter’s syndrome is usually known as a clinical triad of arthritis, urethritis, and conjunctivitis. Peripheral nerve involvement in Reiter's syndrome is extremely rare. We report here on a 36-year-old man presenting to the orthopedic department with a chief complaint of lumbar and leg pain who initially was found to have lumbar intervertebral disc and was diagnosed as Reiter’s syndrome 3 months later. Human leukocyte antigen (HLA)–B27 test and bacterial culture of urine were positive. Clinical symptoms were relieved after conservative treatment with celecoxib, dexamethasone and antibiotics. This case suggests that Reiter's syndrome can present as lumbar spine lesions and should be considered in the differential diagnosis of lumbar intervertebral disc.
Key words: Lumbar and leg pain, Reiter’s syndrome.

Reiter’s syndrome is well known by many as a seronegative spondyloarthropathy along with reactive arthritis, and since its classic form includes the triad of conjunctivitis, urethritis, and arthritis as was originally described in 1916 by Hans Reiter, cases of multiple-organ involvement in patients with classic Reiter’s syndrome have been documented (Carter and Hudson, 2009; Montanaro and Bennett, 1984). It is typically identified in young male patients during their third or fourth decade of life after a urogenital or gastrointestinal infection (Howard et al., 2007; Wu and Schwartz, 2008). A significant number of patients with Reiter’s syndrome also manifest their mucocutaneous symptoms, namely keratoderma blennorrhagica on the palms and soles, onychodystrophy, oral ulcers, and circinate balanitis (Edrees, 2012). These clinical features are necessary for establishing a diagnosis. However, we herein describe a case who was repeatedly misdiagnosed as lumbar disc herniation in other hospitals because of his chief complaint, and was finally diagnosed as Reiter's syndrome in our department. This paper reports a case with a view to presenting a rare clinical symptom in the diagnosis and differential diagnosis of Reiter's syndrome.

A 36-year-old previously healthy male patient who presented with a chief complaint of two months history of low back pain was admitted to our hospital. He was diagnosed as Lumbar disc herniation in other hospitals and had been treated
with “fenbid capsules” to resolve his pain symptoms, without success. Three weeks later, he started to develop left sciatica pain. On examination, he was afebrile, and his vital signs were stable. Significant positives on physical examination were positive Lasegue sign of the left leg (40°), numbness on left L5 nerve root dermatome, weak extension of the left ankle and hallux (grade 4 on a manual muscle test), lumbar magnetic resonance imaging revealed an L4–5, a central extruded disc herniation (Figure 1). His visceral, neuropsychiatric, and lymphatic examinations showed no obvious abnormalities. 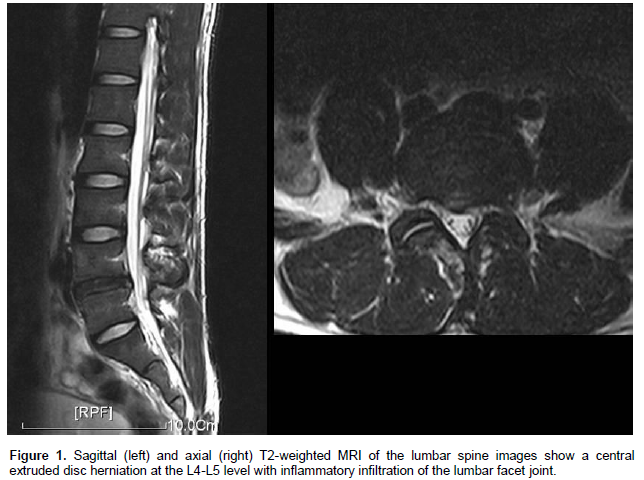 When the patient arrived at our hospital, he had already been submitted to conservative treatment in accordance with the treatment of lumbar disc herniation, including fenbid (300 mg 2 times per day) and prolonged bed rest, which proved unsuccessful in relieving back pain symptoms. Later on, anti-inflammatory medication was discontinued because of stomach pain. Upon admission, in view of the unserious nature of the imaging performance of lumbar disc herniation and the parents’ doubts about the effect of the surgery, we decided to continue with conservative treatment, including providing pain relief, mannitol, traction and partial massage treatment. After three days of conservative treatment, he had a sudden onset of a high fever to 39°C with urethritis symptoms, ranging from mild pain urethral discharge to dysuria with mucopurulent discharge. He was sexually active with one partner and denied any history of sexually transmitted disease. His physical examination showed swelling and tenderness of left ankle joint. Blood routine examination showed white blood cell (WBC) count 16,680 cells/cmm, hematocrit 45%. A routine urine test showed leukocyte (+++). We believed that he had urinary tract infection, and the left lower limb plaster fixation and norfloxacin injection (200 mg 2 times per day) were added for treatment. After two days of treatment, urethritis symptoms were slightly improved, however, lumbar and leg pain symptoms were lack of improvement and the fever symptom persisted. Moreover, there were small pieces erythematous papules scattered over his penis and the skin of his chest area. His eye examination showed bilateral conjunctiva congestion, but did not affect vision.
Laboratory assessment was ahead of the use of antibiotics, which revealed erythrocyte sedimentation rate (ESR) 85 mm/h, C-reactive protein (CRP) 16.2 mg/dl, uric acid 5.7 mg/dl. His antinuclear antibody (ANA), rheumatoid factor (RF), rapid plasma reagent (RPR) for syphilis, serology for human immunodeficiency virus (HIV), hepatitis B, and hepatitis C were all negative. Urethral cultures done were negative for gonococcus and positive for chlamydia just after the onset of his urinary tract. Test for human leukocyte antigen (HLA)–B27 was positive.  Synovial fluid test of his left ankle joint showed inflammatory with a total white cell count of 18,000/cmm. X-rays of the left ankle joint showed only mild joint swelling. Chest CT examinations showed bilateral small pleural effusion.
We made the diagnosis of Reiter’s syndrome based on the constellation of clinical features and laboratory test results. The patient was treated with norfloxacin 200 mg twice daily as well as dexamethasone (10 mg twice daily), and then celecoxib capsules were added (200 mg twice daily). His eye lesion was treated with cortisone acetate and galtixacin eyedrops. One week after treatment, his clinical symptoms improved considerably. Lumbar and leg pain, left ankle joint swelling and pain had a significant resolution. Hallux and ankle dorsiflexion function was restored. The conjunctivitis and urinary tract irritation resolved completely. His dexamethasone was tapered (later changed to prednisone 30 mg per day) and he was maintained on oral erythrocin 500 mg four times daily and tripterygium glycosides 20 mg three times daily for 1 month. His treatment was not discontinued and his 6-month follow-up after cessation of therapy showed no recurrence of his disease.

Reiter’s syndrome is a subgroup of reactive arthritis, which is historically characterized by the triad of arthritis, urethritis, and conjunctivitis; the pattern of joint disease, predominantly affecting the knees, ankles, feet, and wrists in an asymmetric manner. The joints of the lower extremities are involved more frequently than the upper extremities and symptomatic evidence of axial joint involvement has been reported in up to 50% of individuals with Reiter's syndrome (Martel et al., 1979; Killebrew et al., 1973). In the axial involvement of Reiter’s syndrome, the sacroiliac joint is most commonly involved, especially early in the disease (Klecker and Weissman, 2003). Although Reiter's syndrome uncommonly affects the spine, there are several cases of Reiter's syndrome involving the cervical spine (Halla et al., 1988; Moilanen et al., 1984). This is the first report of Reiter’s syndrome involving the lumbar vertebrae with lumbar and leg pain as the chief complaint.
The mechanisms and etiology of lumbar and leg pain in this case may be due to synovitis and other inflammatory lesions such as enthesopathies of lumbar facet joints occur as a consequence of infection within the genitourinary and possibly at other unidentified sites, and inflammatory aseptic joint disease has been linked with prior infection initiated by many different species of microorganisms. It is a reasonable hypothesis that such lesions result from the release of mediators- immunologic or otherwise - into the circulation at the site of the primary infection, though so far no hard evidence has emerged that microorganisms or antigens derived from them are deposited within the synovium (Keat, 1983). Microorganisms such as Chlamydia trachomatis, Salmonella enteritidis, Shigella flexneri etc have been detected in the joint by immunological techniques and the presence of intra-articular bacterial antigens has now been firmly established with the demonstration of bacteria, bacterial fragments, DNA, RNA, and bacterial lipopolysaccharide in joints of patients with reactive arthritis or sexually acquired reactive arthritis, although there is still some doubt as to the form in which they reach the joint and whether or not they persist (Hughes and Keat, 1994). Some authors in their study concluded that these microorganisms in the inflamed joint might be an important factor in etiopathogenesis of this disease and they are viably active, which supports the hypothesis that arthritis in Reiter's syndrome is probably of the infectious origin (Pavlica et al., 2003; Gerard et al., 1998). However, negative joint culture results from patients with reactive arthritis make it unlikely that bacteria in the joint are viable. In this patient, urethral chlamydia culture was positive. With the use of antibiotics and other drug treatment, lumbar and leg pain and other clinical symptoms has been greatly improved. Thus, it is believed that the occurrence of Reiter’s syndrome in this patient was closely related to the chlamydia infection. This may provide strong etiological evidence for Reiter syndrome caused by infection.
Generally speaking, the diagnosis of Reiter’s syndrome is mainly made by medical history and clinical findings, which may be difficult because only about one-third proportion of patients had the complete classic triad of arthritis, urethritis, and conjunctivitis (Rothe and Kerdel, 1991) and some of the clinical features may be developed without defining time limits until progression of the disease to a certain extent. Moreover, other specified signs and symptoms such as balanitis, mucous membrane, fever, etc which occur in Reiter’s syndrome did not have higher percentages and were analyzed in relation to the presence or absence of HLA-B27 positivity (Rothe and Kerdel, 1991). The criteria for definite Reiter’s syndrome which was simplified by the proposal that Reiter’s syndrome consists of an episode of peripheral arthritis of more than 1-month duration occurring in association with urethritis, cervicitis, or both, showed 84.3% sensitivity and 98.2% specificity (Willkens et al., 1981). There are no definite diagnostic laboratory test for Reiter’s syndrome. In addition to the increased white blood cells and erythrocyte sedimentation rate (ESR) that suggested a bacterial infection, all the laboratory investigations may be negative. Radiographic abnormalities are observed in up to 70% of patients with established Reiter’s syndrome and may be characterized by asymmetrical involvement of the lower extremity and entheses, ill-defined bony erosions (Klecker and Weissman, 2003). Although the characteristic radiographic features of Reiter’s syndrome are similar to other seronegative arthropathies such as psoriatic arthritis and   ankylosing   spondylitis, it still plays an important role in diagnosing the disease.
Given that the patient's chief complaint can easily lead to misdiagnosis, the differential diagnosis of this disease is necessary and lumbar disc herniation should be firstly considered. Magnetic resonance imaging (MRI) is an important method of examination which played an important role in the differential diagnosis of this disease.
The patient was managed conservatively with celecoxib capsules, dexamethasone, tripterygium glycosides and antibiotics. Nonsteroidal anti-inflammatory drugs such as celecoxib capsules are considered as the mainstay of treatment and effective for alleviating the symptoms of lumbar and leg pain caused by inflammatory. Corticosteroids have powerful anti-inflammatory effect; its use can effectively reduce the amount of non-steroidal anti-inflammatory drugs required by the patient for joint symptoms, increasing their anti-inflammatory effect. There is a big controversy about the use of antibiotics in Reiter’s syndrome. Some suggest that treatment with antibiotics should be prescribed pending culture results (Arora and Arora, 2005; Callen and Mahl, 1992).
Although antibiotics treatment for other bacterial triggers of Reiter’s syndrome has shown little or no benefit, it has been shown that tetracycline or an analog can accelerate recovery from chlamydia induced Reiter’s syndrome (Locht et al., 1993; Lauhio et al., 1991). Other drugs that may be used includes etanercept, infliximab, sulfasalazine,methotrexate, and azathioprine (Wu and Schwartz, 2008; Edrees, 2012; Hughes and Keat, 1994; Berenbaum et al., 1996; Youssef et al., 1992; Gill and Majithia, 2008).