Determination of heavy metals in landfill area in Tocantins, Brazil

Improper disposal of municipal solid waste is a problem in Brazil, especially in the North, as noted in Araguatins, TO and can lead to environmental contamination caused by heavy metals. This study aims to analyze the occurrence of heavy metals in soil and leachate in the landfill of Araguatins, TO, Brazil. Soil samples and manure were collected at different points and stored in plastic containers for later laboratory analysis of heavy metals (Cd, Cu, Ni, Pb and Zn (slurry - atomic absorption spectroscopy)) and soil (ICP-MS). Soil samples have heavy metals concentrations based on the recommended range. The slurry samples had lead, copper and zinc above the permissive range.

Population growth has contributed to increase in consumption, and consequently production of wastes, which have varied physical, biological and chemical characteristics (Celere et al., 2007; Chang et al., 2013). Improper disposal of these wastes contaminates soil, water resources, flora and fauna possible through the production of manure, which has toxic substances and microbial agents (Carvalho et al., 2009; Moreira et al., 2011; Riguetti et al., 2015).
Among the important toxic substances are heavy metals (a group of chemical elements in elemental form as a conjugate), which can be toxic to organisms based on their properties, availability, and concentrations (Ag, As, Cd, Cu, Cr, Hg, Ni, Pb and Zn) (Nollet,  2007).  Some of these substances have greater toxicity, are carried by slurry and deposited on soil and water resources. Humans exposed to them can have biochemical (enzyme changes, changes of biomolecules and transport of essential substances) and physiological changes, such as cancers and fetal abnormalities (Nollet, 2007; Chen et al., 2009; Jang et al., 2008; Lucilene et al., 2006). This heavy metal contamination arising from "dumping ground" is reported by several authors; Olowoyo et al. (2012) observed the contamination of vegetable by Fe>Mn>Zn in South Africa; Opaluwa et al. (2012) indicated the contamination of soil and plants (As, Cd, Co and Cu) in Nigeria; Liu et al. (2013) showed the contamination of areas near garbage dumps by Cd> Cu> Cr> Zn>Pb in China. The municipality of Araguatins, TO, located in the Amazon region (IBGE, 2014) experienced improper disposal of solid waste in a landfill located at 3 km from the city (5° 36'7.29 "S / 48° 5'7.88" W) (Figure 1). 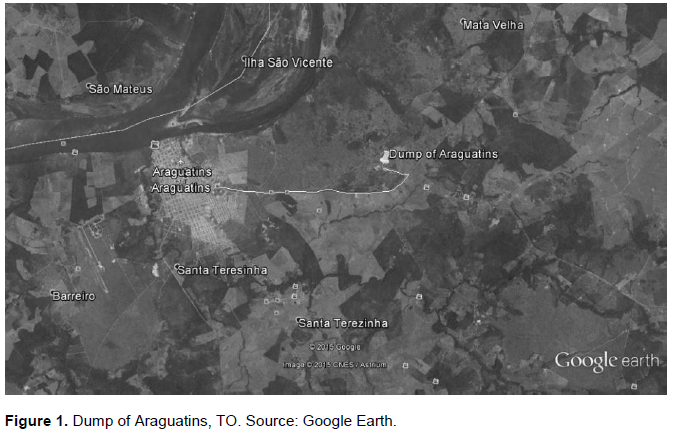 Evaluation of solid waste disposal areas should be performed, since heavy metals can be adduced for agricultural areas, contaminated water sources for human and animal use as well as environmental health damage. Thus, it is possible to choose and adopt the best technical solutions for the prevention of any problem caused (Celere et al., 2007; Cort et al., 2008; Riguetti et al., 2015).
Based on the national resolution of CONAMA (2011) on effluent, the following amounts of heavy metals need to be discarded in the environment: Cd (0.2 mg/L), Pb (0.5 mg/L), Cu (1.0 mg/L), Ni (2.0 mg/L) and Zn (5.0 mg/L).
This study aims to make a physical and chemical characterization of Cd, Pb, Cu, Ni and Zn levels in soil and water samples from Araguatins, TO dump.

Collection of samples
The manure samples were collected at three different points of the catchment pond, packed in polyethylene containers (previously cleaned with HNO3- 30% v/v, and deionized water) and kept refrigerated (Celere et al., 2007).
Collection of soil samples was done at 40 different points, with an English auger at depths of 0 to 20 and 20  to  40 cm.  The  samples were sieved and homogenized for further physicochemical and heavy metals analysis (Barreto, 2014).
Characterization of samples
The slurry samples were initially kept under refrigeration. Subsequently, the samples were analyzed to observe the concentration of heavy metals (Cd, Pb, Cu, Ni and Zn) using spectroscopy flame atomic absorption (Spectra - Atomic Absorption Spectrometer - 50 B and AA 240 -VARIAN).
Soil samples were sent to the laboratory for heavy metals analysis by ICP-MS (EPA Method 6020A). The physicochemical analyses include analysis of the pH in H2O, P, K, Ca, Mg, Al and quantitative assessment of sand, silt and clay (Barreto, 2014).

Physicochemical analysis of the soil
Results of the physic-chemical characteristics of the soil are given in Table 1. The high pH results are due to exposure of the soil to anthropogenic activities, in this case, disposal of solid waste area. According to Campos et al. (2012), unaltered soils in the Amazon region have low pH which can be partly explained by the combustion of organic matter, typical in areas of dumps, clarifying the occurrence of cations (Ca and Mg) and Al, a process similar to that observed in this study.

The high percentage of sand content is caused by soil exposure to human actions leading to local erosion, rather than the percentage of clay (Campos et al., 2012). The high content of P is explained by the incorporation of debris, influenced by the discarded materials of varied constituents.
Heavy metal analysis of the sample soil
Table 2 shows the average values of heavy metals observed in the samples at depth of 0 to 20 and 0 to 40 cm I comparison with the limits recommended by CETESB (2005).

In Tocantins State, there is no specific legislation for heavy metals in soil, hence the norm of CETESB (2005) was used for comparative purpose. It can be seen that the values of these metals are within the recommended ranges.
Metal analysis of manure
Table 3 presents the results of analysis of heavy metals in leachate (garbage dump of Araguatins, TO). Based on the above data, occurrence of the metals, lead, copper and zinc is above the permissive range. While cadmium and nickel are within the range recommended by CONAMA (2011), the occurrence of certain metals relates to the type of waste discarded, since the slurry will have diverse chemical and microbiological compositions in each region (Celere et al., 2007). In a similar analysis, Celere et al. (2007) reported the occurrence of Pb (2.37 mg/L) and Zn (9.14 mg/L) in manure collected in Ribeirão Preto. From these results, risk of water contamination is evident, resulting in risks to human and environmental health.

Improper disposal of solid waste in Araguatins, TO municipality causes environmental contamination risks (soil, water and atmosphere), especially by heavy metals. It was possible to observe the following in the landfill area:
1. The soil has physical-chemical (pH, Mg, Ca) properties and erosion, resulting from human activities;
2. The concentration of heavy metals in soil is within the recommended range;
3. The slurry samples had lead, copper and zinc levels above the permissive range.
Thus, measures to change the municipal waste disposal system must be studied to better match the current legislation in order to reduce the risks to human and environmental health.