A sink term for root water uptake was derived by Rees and Ali (2006) and combined with two-dimensional axi-symmetric equation for unsaturated soil. A couple of researchers have investigated root water uptake in both coupled and uncoupled approaches to ground deformation (Fredlund and Hung, 2001; Navarro et al., 2009; Fatahi et al., 2010, 2009). The root water uptake could be modelled as 1-D, 2-D and 3-D while according to Bechmann et al. (2014), the non-uniformity of root hydraulic properties as important component needed to be accounted for in complex 3-D root water uptake model analysis. Daly et al. (2017) quantified root water uptake in the soil using X-ray computed tomography and image-based modeling and noticed that the spatially averaged models worked well in comparison to the image-based models with <2% difference. A solution of water uptake by plant roots can be dealt with in two main ways (Nyambayo and Potts, 2010; Thomas and Rees, 1991).
The first approach considers that water flow to a single root, called ‘microscopic’ approach, while the second method considers the root systems analyzed as a single unit called ‘macroscopic’. The second model is widely used and allows interaction of transpiration process, inclusion of a volumetric sink term in Richard’s equation to accommodate water-uptake (Feddes et al., 1976; Mathur and Rao, 1999). Kumar et al. (2014) stipulated that the correctness of water uptake forecast by plants depend on mathematical representation used and are obtainable in the form of linear, nonlinear, and exponential. The capability of roots to take up water depends on both root distribution and root water uptake effectivity; the previous will be experimentally measured, at the same time the latter is particularly complex to assess (Li et al., 2013).
Liao et al. (2016) proposed inverse method for estimation of root water uptake which applies only if the following conditions are satisfied: the time interval is between 5-17 days, the time step at the range of 1000-10000 and the rate of soil surface evaporation is ≤ 0.6 mm/d. The developed formulation to predict the changes in capillary potential and the numerical model can be used to investigate the effects of a wide range of soils, trees and atmospheric parameters on unsaturated soils. If the solution converges and tends to zero, then the system is considered stable. The stress-deformation model was validated by Mu’azu et al. (2011) and primary data used in validating the model was reported by Biddle (1998). Martin et al. (2015) accordingly carried out modeling of two different water uptake approaches for mono- and mixed-species forest stands and discovered no single strategy performs best regarding substantiation of data sets, Martin et al. (2015) postulated that a better may be accomplished when measurements of root length, densities and water uptake rates of fine roots are integrated.
Knowledge of the relationship between soil and plant water is limited due to lack of experimental methods to measure water fluxes in soil and plants, according to Mohsen et al. (2014). However, root water uptake was higher in the proximal parts of lateral roots and decreased toward the distal parts (Mohsen et al., 2014). According to Saroj and Sandeep (2011), the impact of the time step is not so adequately studied and is poorly understood (Saroj and Sandeep, 2011). Dai et al. (2010) is a stepwise inverse method with capacities to quantify permeabilities at various spatial scales, which leads to reducing the uncertainty of estimated parameters Due to non-linear numerical stability, spurious numerical oscillations may occur with large time step size (Teixeira et al., 2007). Root water uptake profile was estimated by the mixing model and the mechanistic model with later calibrated with isotopes gave better results and the use of the mixing model is not recommended unless appropriate constraints are applied (Tsutomu et al 2017). The effect of lateral distances and elapse time on the generated capillary potential is relevant. This analysis elaborated the space and time dependency of capillary potential due to root water-uptake. The main objective of the study is to investigate time step sizes, to know whether the convergence criteria have been met.

Two theoretical approaches are used to represent moisture flow in a non-deformable soil viz, the diffusivity based formulation (Philip, 1957) and capillary potential, and is based on Richard’s theoretical formulation (Richards, 1931). Alonso et al. (1987) states that Richard’s formulation is preferred in practice with sinks term as shown in Equation 1:

Where K(ψ) is the unsaturated hydraulic conductivity, t is the time, r and z are the coordinates, θ is the volumetric moisture content and ψ is the capillary potential, S(ψ, r, z) is the root water extraction function and r is the radial coordinate. The root water-uptake extraction function is the sink term S(ψ, z, r) in the Equation 1. For water-uptake in two dimensional axi-symmetric form (Rees and Ali, 2006) comprising of vertical and radial components, incorporating water stress function when soil moisture is limiting is given as:

Where α (ψ) (dimensionless) is a prescribed function of the capillary potential referred to as water-stress function.
Finite element spatial discretization
The spatial and time variations of the unknown variable are estimated where the problem at hand requires capillary to be computed. The numerical solution is achieved by discretizing the 2-D axi-symmetric space domain and the time domain. The process of approximating a given function by using trial functions provides a useful introduction to the finite element approach (Rockey et al., 1983; Zienkiewicz and Taylor, 1989) clearly illustrate approximation by trial functions. The numerical solution of Equation 1 was achieved via the finite element spatial discretization procedure and a finite-difference time-stepping scheme adopting particular Galerkin weighted residual approach. The parabolic shape functions and eight-node isoperimetric elements are employed (Zienkiewicz and Taylor, 1989). Equation 1 is discretized as: 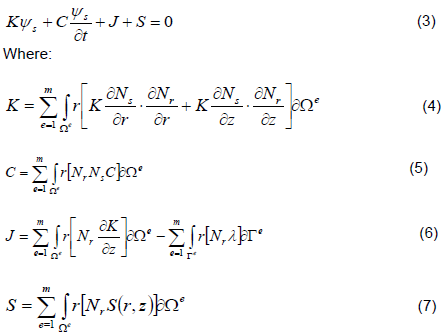 Time discretization
The spatially discretized matrix in Equation 3 is a time discretized by the application of a fully implicit mid-interval backward difference algorithm (Neuman, 1973) and illustrated by Thomas and Rees (1991) who provided the following description as expressed in Equation 3, which may be approximated by:

Clearly Equation 9 cannot be solved directly as each calculation of ψn+1 requires the determination of the coefficients at the mid-interval. Therefore, an iterative solution procedure is necessary. In the current work a predictor-corrector approach is used (Thomas and Rees, 1991). Mathematically, the predictor is expressed as:

The mid-interval values of ψ are calculated next such that:

In Equation12 the matrices K, C, J and S are evaluated corresponding to the values of ψ given in Equation 11. The next correction is made based on a new set of values of ψn+1/2 i.e.:

As the process continues the matrices are evaluated at the last mid-interval estimate. Convergence is monitored between successive correctors and is deemed to have been achieved when:

The value of TOLERANCE is judged for the case at hand, throughout the current work and the value adopted is a capillary potential of -1 cm of water.The resulting numerical solution has been coded using FORTRAN.
Evaluation of the numerical model
The mesh consists of 8-noded isoperimetric linear strain quadrilateral elements with 8-displacement and 8-pore pressure nodes placed at the corners of each element (Mu’azu et al., 2011). The entire mesh, Finite Element mesh, consists of 1281 nodes, 400 elements and the overall size of the finite element domain is 10 m × 10 m as shown in Figure 1. Figure 2 shows a diagrammatic representation of the tree, the extent of the root zone (Mu’azu et al., 2011), the root zone is assumed to extend to a depth of 2 m and a radial distance of 5 m. A Lime tree on Boulder Clay was used for the simulation work. A summary of the relevant properties of Boulder Clay soil is shown in Table 1. 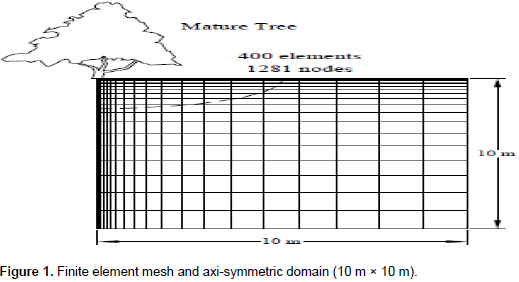 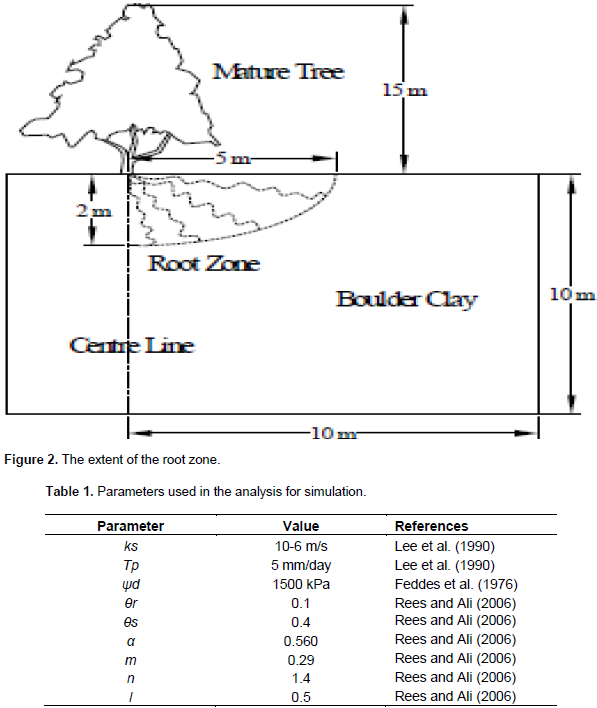 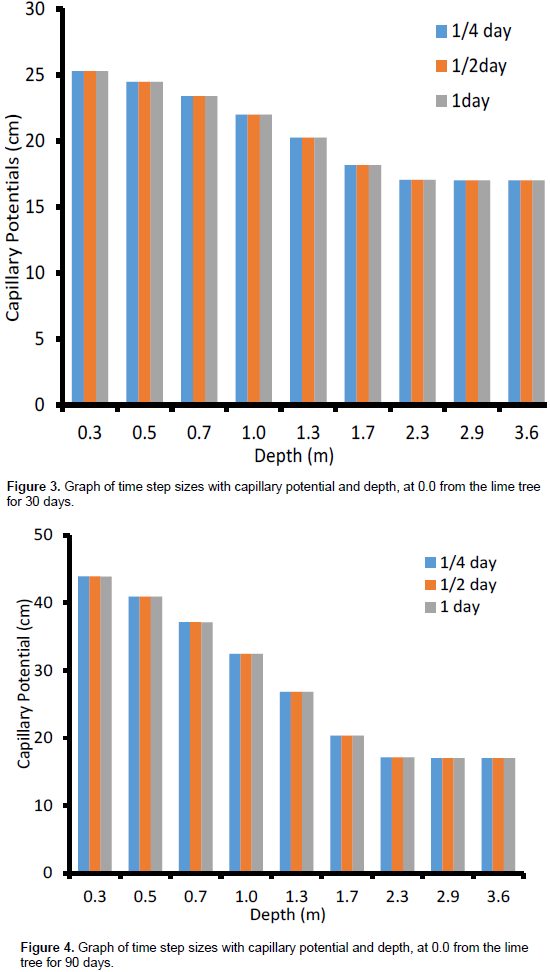 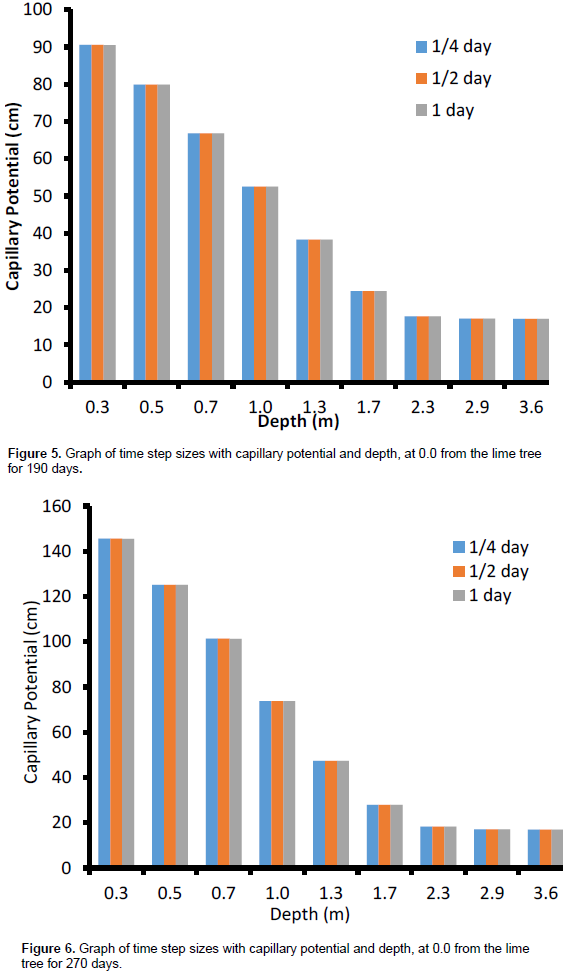 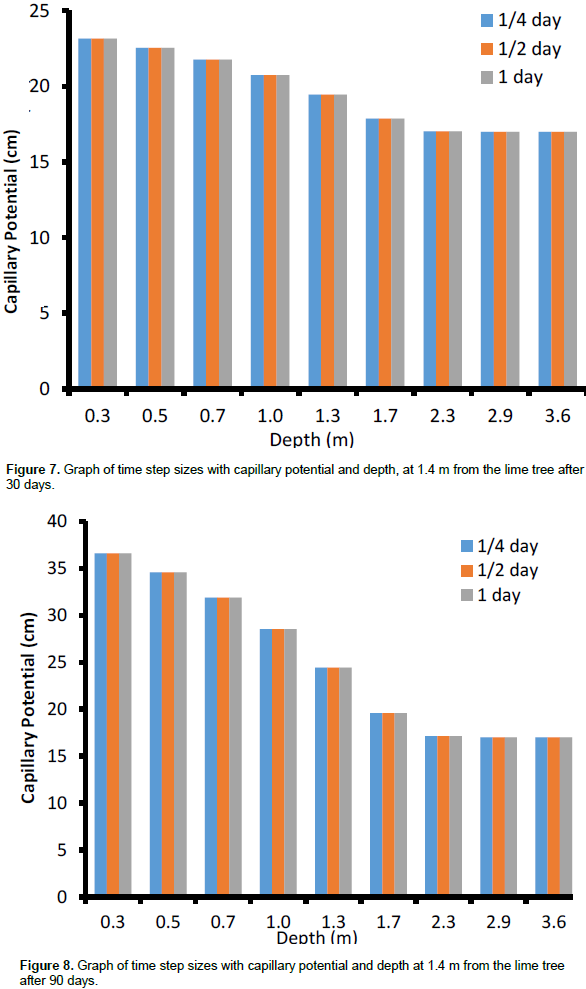 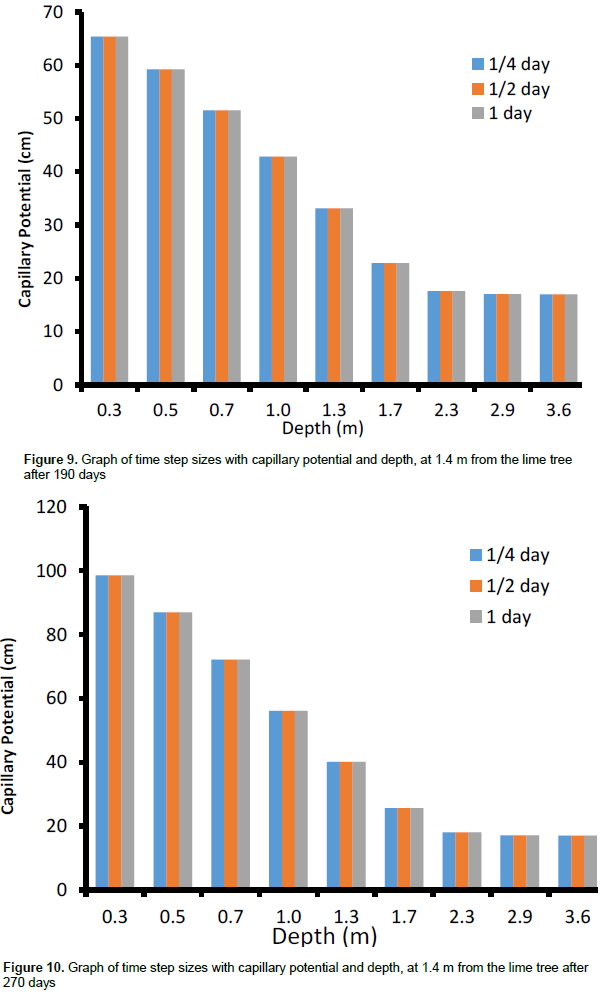 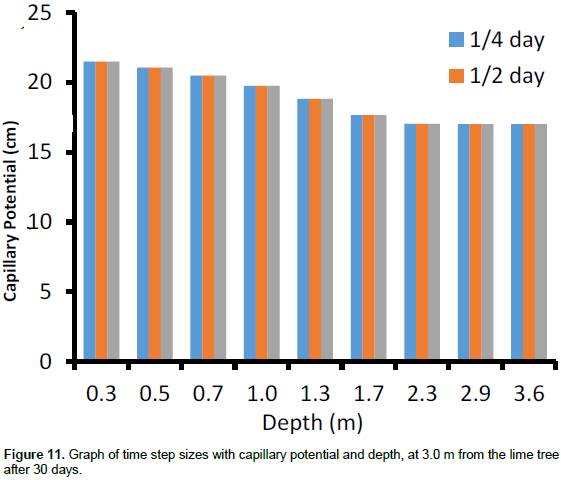 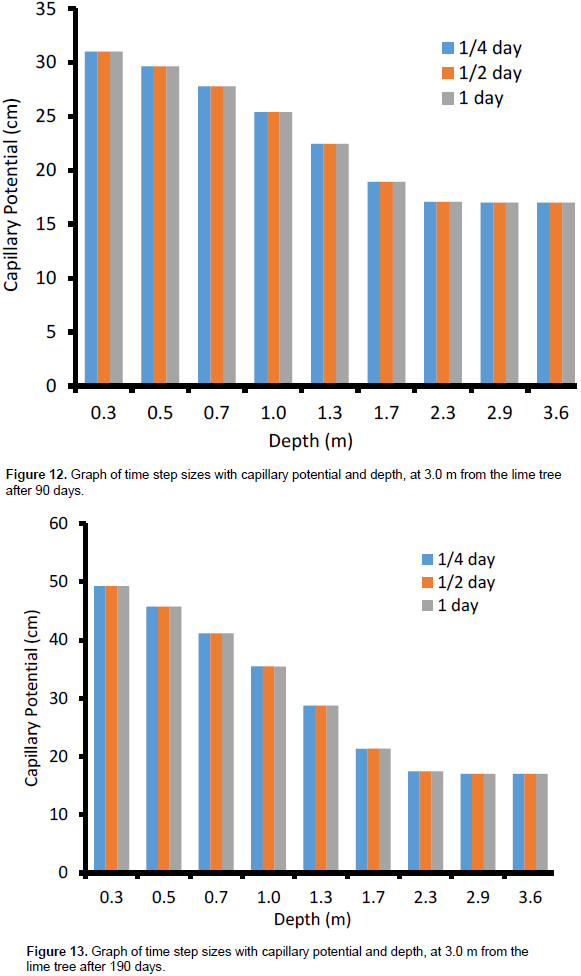 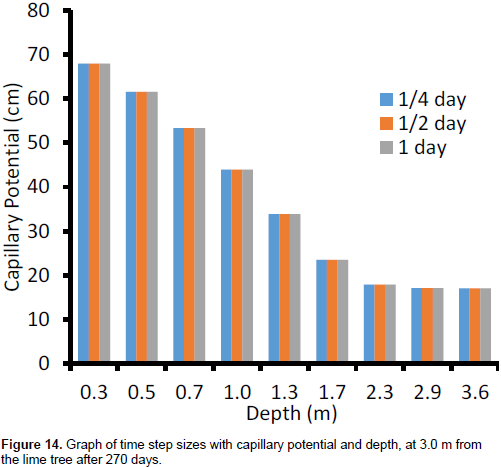 The simulated capillary potential for time step sizes are ¼, ½ and 1 day at 0.0, 1.4 and 3.0 m away from the lime tree differs not more than ±5%. The ideas is to check whether the simulated results at ¼, ½ and 1 days time steps sizes at same spatial distance from the tree as well as same elapsed time, are the same. The results generated shows that time step sizes investigated have met the convergence criteria. The various time step sizes used in the analysis to test convergence criteria were found to differ by not more than ±5%, which is satisfactory.

The authors has not declared any conflict of interests.