Native arteriovenous fistulas in hemodialysis patients: Our experience with 1467 patients operated on in Abidjan 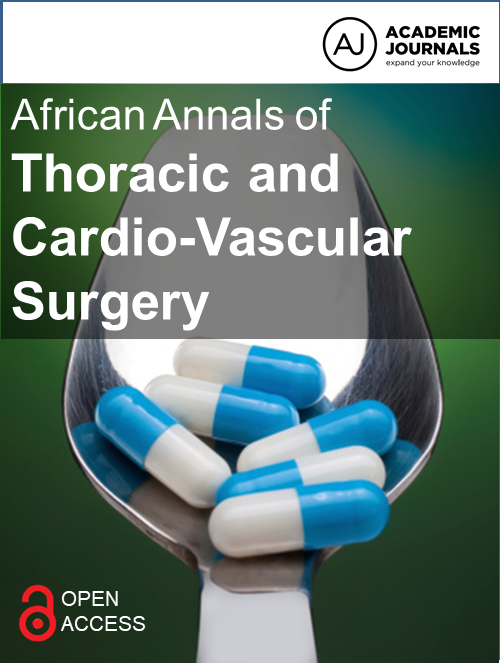 This study aim to report our experience in the fabrication of arteriovenous fistulas (AVF) by describing the operative technique and the immediate surgical results. The study carried out retrospective study of the records of 1467 patients who underwent AVF creation during the period from January 2008 to December 2020.  1396 patients (95.2%) had already been dialyzed with a central venous catheter for one month (1 and 6 months). The procedures were performed under local anesthesia. Distal radio-cephalic AVFs were performed in 92.2% of cases. The fabrication of a radio cephalic arteriovenous fistula was described. The arteriovenous fistulas were patented in 100% at the end of the procedure. We observed 3.1% complications in the immediate postoperative period. Morbidity was constituted by early thrombosis which represented 58.8% of complications followed by false aneurysms (27.5%), compressive hematomas (11.8%) and hemorrhages (1.9%). Fistulas complicated by thrombosis were reconnected. Treatment of the false aneurysm consisted of evacuation of the false aneurysm, surgical hemostasis, and removal of the AVF. The native arteriovenous fistula is the best access route for chronic hemodialysis. This procedure carries little risk. However, complications can be fatal, hence the interest of an early and adapted management of these complications.

The surgical arteriovenous fistula (AVF) is the connection of a vein to a neighboring artery. Together with central venous catheters and arteriovenous bypasses, it constitutes the different vascular accesses for chronic hemodialysis.  The   fistula  is  the  best  vascular  access route. The distal cephalic arteriovenous fistula was described by Brescia and Cimino in 1966 (Brescia et al., 1966). This procedure is performed in the cardiovascular surgery department. The objective of this work is to report our  experience   by   describing   the  surgical  technique and report our immediate surgical results.

We conducted a retrospective study analyzing the records of 1467 patients with chronic end-stage renal disease who underwent native arteriovenous fistula creation from January 2008 to December 2020. These patients were operated on at the Latrille Hemodialysis Center (Cocody) and at the Abidjan Heart Institute. The patients were operated on under local anesthesia. The mean age of the patients was 42.71 years (11 - 79 years). Nineteen patients were younger than 16 years (1.2%). We noted 892 men and 575 women. The sex ratio was 1.6. Hypertension was the most common risk factor in 97% of the patients (Table 1). We had 1396 patients (95.2%) who were already dialyzing with a central venous catheter; or with a previously made but non-functional AVF.  Only 71 patients (4.8%) had an AVF before starting dialysis. 1100 patients (91.13%) had their central venous catheter for more than two (02) months. The mean hemoglobin level was 8.6 ± 1.4 g /dl. The vein and artery were identified clinically in 1358 cases (92.6%). But in case of difficulties, an arterial and/or venous Doppler ultrasound with marking was requested. Thus, this examination was requested in 109 patients (7.4%). The iconography was made with a digital camera. After the intervention, the patients were followed for the time of maturation of the AVF and the events observed during this period were reported. The computer analysis of the data was done using the EPI info software version 3.5.1.

Description of the surgical technique

All procedures were performed under local anesthesia. The choice of limb was guided by laterality, the importance of the superficial venous network, and local history. All fistulas were made in the upper limbs. Several sites were used (Table 2). However, we have chosen to describe the technique for creating a left radial arteriovenous fistula. We began by clinically locating the distal cephalic vein (or radial vein), and the radial artery. These vessels were then marked. Asepsis of the limb was performed, and then setup  was  performed   (Figure   1).   Local  anesthesia   with    2%  xylocaine was performed (07 ml s/c). Anesthesia was re-injected if necessary. Then a skin incision was made over approximately 2 to 3 cm. We proceeded to dissect the distal cephalic vein, then the radial artery. The vein was transected and opened proximally. The arteriotomy was performed after clamping upstream and downstream of the area to be anastomosed (Figure 2). The fistulas were made with 6/0, 7/0, or 8/0 nonabsorbable polypropylene sutures. For this descriptive procedure, we used the 7/0 size wire. Magnifying glasses were used to assist vision. We performed a latero-terminal radiocephalic anastomosis with a 7/0 polypropylene overjet (Figure 3). The arteriovenous fistula was made between the radial vein (or distal cephalic vein) and the radial artery (Figure 4). When the artery was unclamped, we noted patency of the arteriovenous fistula. We placed additional stitches when hemostasis was not satisfactory. At the end of the procedure, we looked for the presence of beats and/or thrill on palpation. After satisfactory hemostasis, the skin was closed with simple stitches. A dressing was applied. Complementary medical treatment was instituted and consisted of: antibiotic prophylaxis, analgesic, and an antiplatelet agent.

The arteriovenous fistula was permeable at the end of the procedure. A flutter and/or thrill was perceived in 1429 patients (97.4%). Auscultatory murmur was found in 1467 patients (100%). AVF puncture was performed after an average of 6 weeks (4 to 12 weeks) of maturation. During the follow-up of the patients, the rate of AVF patency was 96% at the first month.

We observed 51 cases of complications, that is 3.5%. These complications consisted of thrombosis, compressive hematoma, hemorrhage, and false aneurysm (Table 3). Early thrombosis (30 cases) was found in front of a fistula that was initially functioning but stopped functioning. Twenty-eight (28) patients with thrombosis had a hemoglobin level of less than 8 g /dl. The arteriovenous fistulas complicated by thrombosis were all repaired. Six patients had a hematoma that compressed the AVF, resulting in interruption of patency. The patency of the AVF reappeared after evacuation of the hematoma. False aneurysms (14 cases) were observed between the 5th and 21st postoperative day. Nine (9) fistulas, that is 64%, were complicated by hemorrhage following rupture of the false aneurysm. These patients underwent emergency surgery. One patient died from this complication in a hemorrhagic shock. For the 5 unruptured false aneurysms, the operation was scheduled. In all cases, the operation consisted of flattening the false aneurysm, surgical hemostasis and removal of the fistula (Figures 5 and 6). As associated treatment, antibiotic therapy, analgesic treatment and blood transfusion were instituted if necessary. The  arteriovenous  fistula  was  subsequently made at another site. False aneurysms occurred in the context of infection in 13 cases. These  included  catheter infection in 12 cases and one case of abscess in the right buttock.  Three  fistulas  complicated  by false aneurysms were observed in HIV immunocompromised patients. The hemorrhage (n=1) was due to bleeding from the operative wound. This bleeding occurred on postoperative day 2. This patient was taken back to the operating room for surgical hemostasis, with preservation of the fistula. 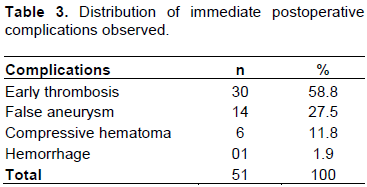 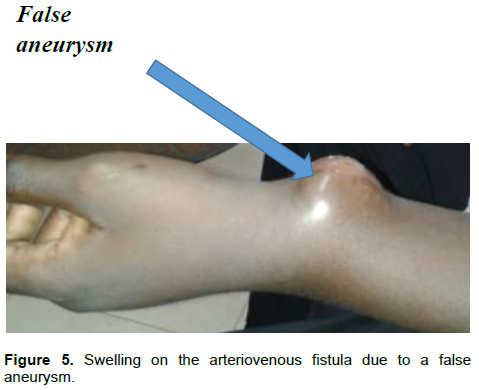 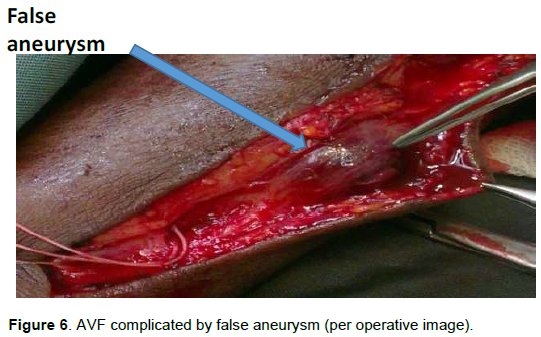 The technique of performing an arteriovenous fistula (AVF) for hemodialysis in chronic renal failure patients was described by Brescia and Cimino in 1966 (Brescia et al., 1966). It represented a major advance in the management of these patients compared to previous procedures, since for the first time a durable vascular access was available once developed (Quinton et al., 1960). The venous capital of the chronic renal failure patient, including before the end stage, must be a key concern for the various physicians, surgeons and caregivers involved in the management of these patients (Barrou  et al., 2000). Chronic renal failure is often discovered at the stage of complications. This requires urgent management. As a result, the majority of patients, 95%, dialyze with central venous catheters. Catheters are necessary in case of emergency and failure of any other alternative (Bourquelot, 2009). These catheters allow patients to dialyze immediately. And to have the arteriovenous fistula made secondarily. Moreover, the AVF is not used until approximately one month after it is made. This delay allows for healing of the surgical wound and sufficient maturation of the vein. In only 5% of cases, the AVF was performed in preparation for dialysis. Thus, the patient did not need a central venous catheter, thus avoiding the risk of catheter infection. Also, the prolonged wearing of central venous catheters before the preparation of AVFs is a  risk  factor  for  poor  survival  of AVFs [9].  The average hemoglobin level found (9g/dl) is similar to that noted by Ouattara (Ouattara et al., 2011). Echodoppler with marking was performed in patients for whom the venous and/or arterial network was difficult to objectify clinically. AVF was performed under local anesthesia, on the nondominant limb, and on the forearm in the majority of cases. AVF was performed on the forearm in 93.2% of cases. The left cephalic radio site was the most used (80% of cases) as reported in several studies (Radoui et al., 2011; Bensalah et al., 2001; Youmbissi et al., 1998). According to Luc Turmel (Turmel, 2012), forearm fistulas should absolutely be preferred because of their advantages which are: A better long-term survival rate, less ischemic complications, less hyper flow and aneurysm, preservation of venous capital, less severity of complications, less morbidity of re-do. However, AVF was performed in the arm when the superficial venous network of the forearm was poor or when the vein was thrombosed due to punctures. Or when other complications occurred on an initial fistula. In our practice, distal AVFs were preferred. The procedure consisted of a latero-terminal arteriovenous anastomosis in the majority of cases. The overjet was performed with a non-absorbable suture, in this case polypropylene number 6/0, 7/0, or even 8/0. The size of the monofilament was determined by the intraoperative findings. Magnifying glasses were used as an aid to vision. It is now well established that an average delay of 4 weeks is essential before puncturing an AVF to allow its maturation (Tordoir et al., 2007). During this period, morbidity was low and estimated at 5.4%. This morbidity was dominated by thrombosis, hemorrhage, and false aneurysms. Youmbissi (Youmbissi et al., 1998) found similar postoperative complications. Immediate postoperative morbidity is dominated by early thrombosis

In  the  literature  (Alaoui  et  al.,  2013;  Bensalah   et  al., 2001; Radoui et al., 2011; Youmbissi et al., 1998), the rate of occurrence of which varies from 7.5 to 29% postoperatively. This thrombosis would be favored by anemia with a hemoglobin level lower than 10g/dl (Gheith, 2008). The false aneurysms observed could be due to an infection of the fistula. The prolonged wearing of central venous catheters favors the occurrence of false aneurysms. Patients who have infected catheters are also at risk of infecting their arteriovenous fistulas. And this infection exposes the patient to bleeding risks. Indeed, these false aneurysms can rupture and lead to a hemorrhage that carries a risk of death, as we have observed, because these are already anemic patients. This hemorrhage is more important when the fistula has been made in the arm. Schneider et al. (2003) found hemorrhage in 2.6% of cases. The management of the hemorrhage must be early and adapted. The operative mortality of AVF is nil. This result corroborates that of the literature (Radoui et al., 2011; schneider et al., 2003). It is therefore a benign procedure but its postoperative complications can be fatal.

The native arteriovenous fistula is the vascular approach of choice for chronic hemodialysis. The realization of forearm AVFs has been our priority. The surgical results of arteriovenous fistulas are globally satisfactory. However, some immediate postoperative complications have been observed: thrombosis, hemorrhage, and false aneurysms. The management of these complications must be early and adapted.