OFFICIAL PUBLICATION OF THE SOCIETY FOR CELLULAR PATHOLOGY SCIENTISTS OF NIGERIA

The umbilical cord is the critical organ that links the placenta and fetus. The intrauterine conditions and fetal activity influences the umbilical cord length. The normal umbilical cord is spiraled. By ultrasound, the spiral nature of the umbilical cord can be demonstrated early in the ï¬rst trimester. Most of the adverse pregnancy and perinatal outcomes are related to abnormal Umbilical Cord coiling Index (UCI). A 23 year booked G2P1+0 of about 4/12 pregnant is presented. She presented 4 h history of colicky lower abdominal pain and 1 h history of vaginal bleeding; there were passage of blood clot but no fleshy materials or vesicles. No history of urinary symptoms or trauma, she is not a known Diabetics, hypertensive or sickle cell diseases patient. On examination, was not in painful distress, not pale, afibrile (36.9°C), anecteric and no fedal edema. Other parameters were within normal limit. Pelvic examination reveals a vulva smeared with blood, the fetal membrane were bulging into the vagina, this rupture spontaneously, and the cervix was fully dilated. She was managed for inevitable abortion; she subsequently expelled a female abortus. The abortus and the placenta were taken for histology which shows ischemic infarction on the placental tissue and hyper coiling of the umbilical cord. She was placed on anti-malaria, antibiotics and heamatenics, and was discharged home for follow-up. Modern imaging techniques are useful in the evaluation of Umbilical Cord coiling Index especially during the second trimester. To predict the adverse prenatal and pregnancy outcomes with view of instituting appropriate measures to obviate them, therefore routine screening for the high index cases is suggested.

The connecting stalk of the fetus develops blood vessels and fuses with the omphalomesenteric duct to become the umbilical cord approximately 7 to 8 weeks after conception (Moshiri et al., 2014). Between 12 and 16 weeks of gestation, the allantoids or urachus develops as a second out pouching from the primitive gut and projects into the connecting stalk, and its blood vessels develop into the umbilical cord vasculature (Moshiri et al., 2014). The umbilical cord grows until the end of the second trimester to a length of 50 to 60 cm and The normal umbilical cord is spiraled (Frederick et al., 2002), usually counterclockwise    (counterclockwise/clockwise    =   7:1) (Frederick et al., 2002), and the average number of coils is 0.2 coil/cm (Frederick et al., 2002). The coiling is thought to be due to the distribution of the helical muscle fibers in the umbilical cord vessels (de Laat et al., 2005). Coiling is thought to protect the cord by adding strength and resisting compression of the vessels. The cord length and twists depend on the tensile forces placed on the cord by fetal movements (de Laat et al., 2005). One of the most important parameter to be taken accurately and promptly before taking samples for other special studies is the  length of the  umbilical cord; this is due to the fact that during few hours after delivery the umbilical cord length decreases by as much as 7 cm (Frederick et al., 2002).  Standards for cord length relative to gestational age have been established (Kraus et al., 2004). The mean cord length at term is about 55 to 60 cm (Glanfield and Watson, 1986).  Many factors influence the growth of the umbilical cord, reflects it length, which are mainly tensile forces related to activities of the fetus and intrauterine conditions affecting fetal movement. Due to decrease in fetal movement during the third trimester the growth of the umbilical cord is slows, although some cord growth occurs normally until term. Relatively short cords are associated with amniotic bands, oligohydramnios, crowding (multiple pregnancies) and Down's syndrome. This is because these conditions restrict fetal mobility. Adverse prenatal and pregnancy outcomes are associated with extremes of umbilical cord length. Therefore some consideration of relative as well as absolute cord length is appropriate. Excessive torsion may be associated with interruption of fetal blood flow and fetal death (Glanfield and Watson, 1986).  Long cords are associated with excessive torsion and at the fetal end of the cord, where it is sometimes associated with stricture. Strictures are usually single, sharply defined, short segments of the cord, most frequently occurring at the fetal end, with contracted vessels, a loss of Wharton jelly, or fibrosis. Associated venous congestion, edema, and thrombi provide evidence that the lesion is not a postmortem artifact (Hallak et al., 1994; Sun et al., 1995).

A 23 year booked G2P1+0  whose Last Child Birth was 10 months ago and was about 4/12 pregnant was presented. She presented 4 h history of colicky lower abdominal pain and 1 h history of vaginal bleeding; there were passage of blood clot but no fleshy materials or vesicles. No history of urinary symptoms or trauma prior to the onset of her problems. The index pregnancy was spontaneously conceived and booked 2/12 prior to onset of her problems.

Her 1st pregnancy was in 2014. It was carried to term and she had unsupervised home  delivery  of  a  severely asphyxiated male baby boy who died few hours after birth. She is not a known diabetics, hypertensive or sickle cell diseases patient. Not in painful distress, not pale, afibrile (36.9°C), anecteric no fedal edema.

PR was 72 B/P, BP was 116/70 mmHg, RR was 20C/P and Chest clinically clear. There was abdomen full moves with respiration; she had supra pubic tenderness; liver, spleen and kidney were not palpably enlarged and the uterus was about 18/52 size.

For pelvic examination the vulva was smeared with blood, the fetal membrane were bulging into the vagina, this rupture spontaneously, the cervix was fully dilated. She was managed for inevitable abortion and had oxytocin infusion 10IU in 1 L of normal saline; she subsequently expelled a female abortus, which was well developed, the placenta was also delivered completely and she subsequently had a check manual vacuum aspiration. The abortus and the placenta was taken for histology result of investigations: MP +, PCV=25%, FBS= 4.2 mmol/L, Blood group was B+, Hb genotype was AS, urinalysis (Blood ++, Ketenes +).

She was treated for malaria, and also was placed on ciprofloxacin and metronidazole and heamatenics; she was discharged home for follow-up to clinics in three week’s time; she came back and had no complain.

The umbilical cord is the critical organ that linked the placenta and fetus. The intrauterine conditions  and fetal activity influences the  umbilical cord length. Diminished blood flow from the umbilical cord result into severe or increase risk of fetal compromise (IUGR or Neurologic injury) or death (IUFD). Many factors leads to umbilical cord flow compromised among which are, mechanical factors (compression), damage to blood vessels (trauma, inflammation or meconium) or thrombosis. Abnormalities of the umbilical cord with the potential for blood flow obstructions like abnormal coiling, stricture, true knots, abnormal length, prolapse,velamentous insertion or entanglements (Baergen, 2007; Baergen et al., 2001). Many of these conditions are related; true knots and excessive coiling commonly occur in long cords, and stricture almost always occurs in a hyper coiled cord (Parast et al., 2008) vascular channels dilatations and thrombosis, chorionic, intimae fibrin cushions, and /or villous alteration reflecting fetal vascular occlusion (villous stroma -vascular karyorrhexis) are evidence of chronic partial or intermittent blood flow obstruction (Parast et al., 2008). Based on these ï¬ndings, more than half of the unexplained intrauterine fetal deaths resulted from non-acute umbilical cord compression. Acute ï¬‚ow obstruction may supervene when a knot or entanglement tightens during delivery or there is cord prolapse. Umbilical cord obstruction  and  compression  have  been  confirmed  by Doppler studies to impede venous return. Cord torsion is a rare form of cord constriction that can occur at any trimester but is more common during the second and third trimesters. Cord torsion is defined as excessive twisting of the cord at any site along the entire length of the umbilical cord. Umbilical cord torsion can lead to critically reduced fetal blood flow and fetal hypoxia, oligohydramnios, IUGR, and fetal death (Fleisch and Hoehn, 2008). Cord torsion is difficult to diagnose prenatally, and most cases are detected during postnatal examination of the placenta and umbilical cord (Fleisch and Hoehn, 2008). As in the index case.

The normal umbilical cord averages about 0.2 coils/cm (coiling index = number of coils per cord length) (Kraus et al.,   2004).  Umbilical  cord   with Coiling  index  of  >  0.3 coils/cm is consider to be hyper coiled, while hypo coiled are those umbilical cord with coiling index of <0.1 coils/cm (Kraus et al., 2004) in the index case, the umbilical cord is hyper coiled with  the coiling index >0.3 coils/cm (that is 1.4 coils/cm) (Figures 1 and 2). Umbilical cord coiling is thought to reï¬‚ect fetal movement; it is decreased in association with uterine constriction or fetal abnormalities that affect movement. Twins and babies with chromosomal abnormalities have been reported to have high incidence of hyper coiled umbilical cord. Hyper coiling is more common in long cords, male fetuses, multigravidae (presumably due to more room for fetal movement), and in association with maternal illicit drug use commonly cocaine (Fleisch and Hoehn, 2008). Hyper coiling  may   be   associated   with  stricture  or  may   be localize or affect the entire umbilical cord length as seen in this index case where the entire length of the umbilical cord is involved (Figure 2).  Thrombosis of umbilical and chorionic plate vasculature, intimal ï¬brin cushions, and vascular calciï¬cation suggest a chronic process in some cases. No such evidences are noted in this index case. Hyper coiled umbilical cords have the potential for blood ï¬‚ow obstruction. Hyper coiling has been associated with adverse fetal outcome, including fetal IUGR, intolerance of labor, and IUFD (Fleisch and Hoehn, 2008). The index case is associated with adverse outcome of fetal demise. 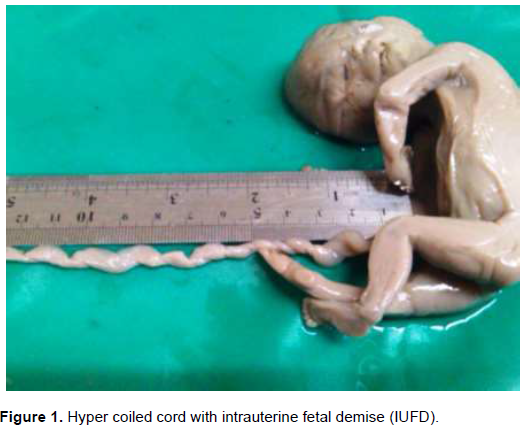 Modern imaging techniques are useful in the evaluation of Umbilical Cord coiling Index especially during the second trimester. To predict the adverse prenatal and pregnancy outcomes with view of instituting appropriate measures to obviate them, therefore routine screening for those cases with high index of suspicions is suggested.