The role of elephants as military pack animals in the Abyssinian Campaign, 1867-1868

In late 1867 the British Government authorized a military expedition to effect the release of 59 hostages being held at Magdala by Emperor Tewodros II.  The force consisted of 13,000 soldiers and 40,000 transport and pack animals.  Its formidable task was to travel 650 km and ascend 3,050 m of altitude before it reached its goal. The animals comprised horses, mules, donkeys, bullocks, camels and 44 elephants. The elephants were loaded on ships at Bombay by means of slings.  Loads for the elephants varied in the range 600 to 730 kg for those transporting 12-lb breech loading Armstrong guns and 800 to 840 kg for those carrying 8-inch mortars.  These loads were 12 to 16 times heavier than the normal 55 kg mule load. Tracks had to be cut and levelled before the animals could pass and they struggled to mount the steeper inclines. Only five elephants died during the expedition and 39 returned to Bombay.

In 1862, Tewodros II (Theodore), the Coptic Christian Emperor of Abyssinia (now Ethiopia and Eritrea) asked the British Government for help in obtaining the latest weaponry and for tactical experts to help him in his wars with his mostly Muslim neighbours. He received no answer, took umbrage, and incarcerated several Europeans as hostages at his base at Magdala in the highlands.  Among the hostages was the British Consul who was kept in chains for over two years. As there were also British women and children amongst the hostages the general public demanded that the government do something about it. Diplomatic approaches and gifts did not persuade the Emperor to release the captives such that by June 1867 it was reluctantly concluded that military intervention was necessary. The action was not, however, to be a mission of  conquest:  the  military force would withdraw once the hostages were freed and Theodore punished. Very few personnel were sent from Britain. The expedition was staffed from Bengal and Bombay forces, comprising Indian Army regiments and British regiments serving in India that were usually used to maintain British control  Commanded by Lieutenant-General Sir Robert Napier, a massive force of 13,000 troops and 40,000 baggage and transport animals landed at Zula, now in Eritrea, in December 1867.  Magdala was just short of 650 km (400 miles) from Zula and 3050 m (10,000 feet) above sea level. There were no roads to speak of, so these had to be constructed. Indeed, one of the first orders given by Napier after his arrival was to clear and make passable by elephants the road up the escarpment to Senafe, at an altitude of 2,446 m (8,025 ft).  At   the   same  time  he instructed  that  loading  and  unloading the elephants with the heavy armaments should be practised (Holland and Hozier, 1870: 384). Innovations in the warfare of the period required a harbour to be constructed, 32 km (20 miles) of railway to be built, the laying of telegraph line over most of the distance and the use of desalination plants to turn sea water into fresh water (NAM, 2020). Depots were to be established at strategic points along the route which first went in a generally westerly direction to Senafe then southerly to Magdala (Figure 1). The route taken to Senafe was about 96 km (60 miles) and was a march of five days for the troops.
Almost 100 years after the event one noted war correspondent and author wrote:
There has never been in modern times a colonial campaign quite like the British expedition to Ethiopia in 1868. It proceeds from first to last with the decorum and heavy inevitability of a Victorian state banquet, complete with ponderous speeches at the end. And yet it was a fearsome undertaking; for hundreds of years the country had never been invaded, and the savage nature of the terrain alone was enough to promote failure (Moorhead, 1964: 264).
Another description of the Expedition states that this was “a hostage rescue in the 19th century conducted by British  forces  that  is  perhaps unparalleled in scope and audacity” (Zoll, 1988).  Yet a third describes a similar situation:
The endeavour of the author of this sketch has been to present to readers a succinct and impartial account of an enterprise which has rarely been equalled in the annals of war. In the Abyssinian campaign the enemies to be feared more than the open foe were natural obstacles and starvation. These were successfully encountered and subdued. The difficulties would have been more apparent, had their reduction been less skilful. The danger and possibility of disaster would have been more manifest had they been less carefully guarded against (Hozier, 1869:v-vi).
The objective of this paper is to describe the part played by elephants in the campaign and examine the problems they met and the ones they caused. 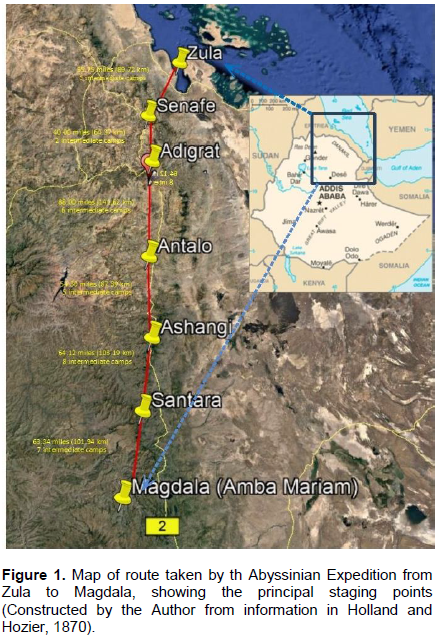 1. The 33rd (Duke of Wellington’s) Regiment of Foot was a conspicuous element of Napier’s army. It is now the 1st Battalion, The Yorkshire Regiment whose Battle Honours include “Abyssinia and whose mascot is an Indian elephant.
2. The distance from Zula to Senafe “as the crow flies) is 66 km (41 miles).  There is now no direct road from Zula to Senafe and to reach the latter from the former once must travel north to Massawa, west to Asmara and then south to Senafe, a distance of 273 km (169 miles).  The author of this paper has mixed memories of Senafe as in August 1974 his vehicle was hijacked and burnt by guerillas of the Eritrean Liberation Front struggling for Eritrea’s independence from Ethiopia.

This paper is largely based on an analysis of the official record of the Expedition published in 1870, two years after the events described herein took place (Holland and Hozier, 1870). Additional contemporary accounts of the campaign together with more recent publications were consulted to complement the main document.

Elephants carried the entire mortar battery from Zula to Magdala and the Armstrong guns with their carriages, limbers, ammunition and other bits of equipment from Antalo to Magdala, and doing the same on the return journey, over extremely difficult and mountainous country.  Providing them with suitable forage was no easy
matter and the difficulty of obtaining water for them, especially at Magdala, certainly contributed to the loss of the five animals that died. It was said that they “did their work well in carrying, as they did, loads varying from 8 to 16 cwt (406 to 812 kg) each and without them it would have been impossible to have taken the heavy guns and mortars to Magdala, unless very considerable delay had taken place in making roads fit for wheel carriage” (Holland and Hozier, 1870).
At the conclusion of operations the Commander-in-Chief Lieutenant-General Sir Robert Napier wrote a series of despatches to the Secretary of State for India. In Despatch No. 6 dated 1 June 8 he wrote:
Elephants have frequently been employed for the transport of artillery in Indian warfare, but it has been generally by means of draught; when guns have been carried, it has only been for short distances.  It has been the privilege of this campaign to prove that elephants could carry Armstrong 12-pounder guns and 8-inch mortars over steep mountains for many hundreds of miles. There were 42 elephants employed in the conveyance of ordnance and ammunition, and of these five have been lost from hard work and want of water during the operations before Magdala (Holland and Hozier, 1870).
The achievements of the elephants can probably be described as magnificent.  It needs to be remembered, however, that there were only 44 of them and they did not all reach Magdala.  In contrast, the Expedition’s Transport Train on the day that Magdala was captured numbered 7,365 camels, 11,155 mules, 1,708 ponies, 6,922 pack bullocks, 901 draught bullocks, 784 donkeys 305 mule carts, and 345 bullock carts  (Holland and Hozier, 1870).  The contribution of the elephants to the overall transport operations was thus extremely small.  In addition, what should have been their major contribution, landing artillery shells and mortar bombs on the Magdala fortress, did not materialise as neither guns nor mortars could get close enough to the intended target to achieve that goal.
As Napier indicated, the expedition had proved that elephants could be used to carry heavy loads over long distances over extended time periods.  The main outcome, however, may have been the impression they created in the local populations that the Invading force was something to be feared not only because of its size and organization but also because it was using some kind of magic that allowed it to have power over elephants and bend these formidable creatures to its will.
Postscript
The Abyssinian Expedition has received approbation from many and varied sources since it was mounted more than 150 years ago.  It is regarded as a military operation that was well planned, well organized, well executed, integrated various arms of the military and that achieved its objectives with a minimum loss of human life on the British side (Bates, 1979).
The Expedition has been  described  as  “an  enormous undertaking, in size, in duration, and in financial cost.
Essentially a hostage rescue operation, it is one of the classic examples of combined expeditionary warfare” (Ashcroft, 2001).  It has also been depicted as “one of the most expensive affairs of honour in history” (Marcus, 1995).
With regard to its cost a best estimate of the expense is eight million pounds sterling at 1868 prices. This is roughly equivalent to £ 910,594,688.60 or US$ 1,172,030,976.67 in 2020 values. All 59 hostages (a baby was born the next day to make the total 60) were released on 12 and 13 April 1868 and were transported out of the country although several returned there at a later date.  The unit cost of rescuing a hostage, not necessarily for the sole benefit of the one person but for the pride of the British Empire, was thus £ 15,433,808 (US$ 19,864,931).
10Note the error in this Despatch where Napier states there were 42 elephants whereas 44 was the actual number.
11https://www.in2013dollars.com/uk/inflation/1868?amount=8000000

The author is deeply indebted to the two anonymous rewiewers who made constructive comments and suggestions for the improvement of the manuscript.