Ever since it was first described by Billroth, there is an increasing incidence of multiple primary malignancies cases, due to increase in the survival rate of cancer patients and improvement of diagnostic tools. Incidence of second malignancies in cancer patients is 10 to 20%. A total of 10 patients who fulfilled the inclusion criteria were included. All the 10 patients’ case sheets were pursued, and the biochemical, radiological and histopathological reports were analyzed. Results revealed that out of the 10 patients, five were synchronous and the other five were metachronous with a median age of 59 years. Four male patients and six female patients are included. The most common malignancy sites were the stomach and breast, and the mean time interval between both the metachronous tumors is 7.2 years. Thus, a strong clinical suspicion is needed for detecting the multiple primary malignancies, anda treatment plan should be formulated individually for every case.

This is a retrospective observational study done at Saveetha Medical Hospital from January 2016 to December 2018. Hospital records were pursued to retrieve malignancies that qualified as double malignancies as per the International Agency for Research on Cancer Categorization.

We included all patients who had histological proof for double malignancy, fit these into Warren and Gates criteria (Bagri et al., 2014; Sakellakis et al., 2014) (Table 1)  and  are  diagnosed  in  the period from January 2016 to December 2018. However, the patients who had no clear cut histological diagnosis and those with suspicion of second benign metastasis are excluded. Consent was obtained from the Dean of the Institute and Institutional Ethical Committee for publication of the data.

Over a 3-year period (2016 to 2019), we had 10 double primary malignancy cases in our institution. Median age of occurrence was 59 years, with a range of 38 to 76 years. Of the 10 cases, five were synchronous (Table 2) and five were metachronous (Table 3) with a ratio of 1:1 between synchronous and metachronous cases. Male to female ratio noted is 1:1.5 with four males (40%) and six (60%) female’s patients registered in the study (Figure 1). The most common site for primary malignancy in metachronous cases is breast with two cases (40%) and cervix, uterus and rectum each with one case (Figure 2) and the most common site for secondary malignancy in metachronous is stomach with three cases (60%) followed  by  one case each in pancreas  and  soft  tissue tumor (Figure 3). The most common presenting malignancy in cases of synchronous tumor is breast with two cases (40%) followed by stomach, anal canal and nerve sheath tumor with one case each (Figure 4).The common identified malignancy in cases of synchronous tumors is stomach (40%) and thyroid (40%) with two cases each followed by one case of carcinoma breast (20%). Of the 10 cases, four were early tumors, sixwere advanced tumors, two cases had undergone palliative therapy whereas the other eight cases have undergone surgical treatment. The mean interval between appearances of metachronous tumor is 7.2 years ranging from 2 to 11 years. Majority of the cases are gastrointestinal tumors in this study followed by breast carcinoma. 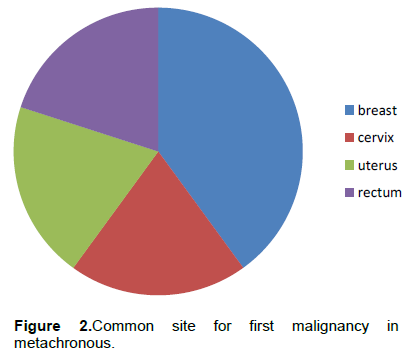 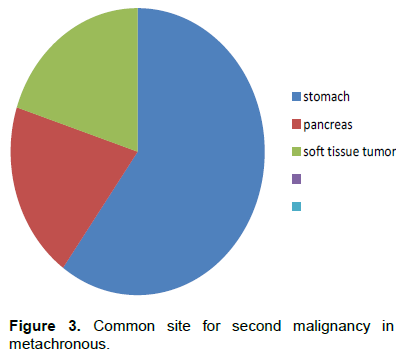 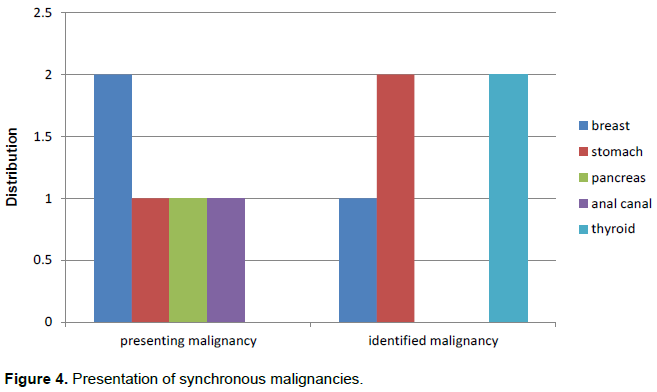 Ever since it was first reported by Billroth (Gupta et al., 2016), there were several studies reported on double primary malignancies. They can be classified by Moertel classification (Jena et al., 2016) or by time interval. By time interval, they are classified as synchronous and metachronous   (Ahmed  and  Abbas 2014;  Mesmoudi et al., 2011) tumors but there are no generalized categorization for the time limit.

In our study, we had one case of type IB (4th case in metachronous table), one case of type IC (5thcase in synchronous table), one type II (1st case in synchronous table), and a maximum of type III (7 cases) (Tables 4 and Figure 5). The pathophysiology in these cases is theorized to be the effect of a  common  etiological  factor on multiple sites known as ‘Field cancerization’ (Joseph et al., 2016; Irmie et al.,2010), which is most commonly seen in head and neck cancers or due to the effect of the treatment to the first malignancy. The most cited etiological factors are genetic susceptibility, immune factors, as well as intensive exposure of carcinogens (Wood et al; 2012). Genetic changes that are noted in double primary malignancy patients are punctiform metastasis, loss of heterozygosity, and microsatellite instability (Bagri et al., 2014). A common genetic change is deleterious mutation. Various syndromes which have been reportedly associated with double malignancies  are Hereditary breast and ovarian cancer syndrome (BRCA genes), Lynch syndrome (MMR genes), Von Hippel–Lindau disease (VHC genes), Li- Fraumen syndrome (p53 genes) (Raissouni et al., 2012), and MEN syndrome

(RET genes). Genetic testing can be warranted in patients with multiple primary malignancies but the barrier in Asian countries is the cost effect and misinterpretation of the results (Chan et al., 2018). Doxorubicin based treatment to first cancers show a higher incidence of second malignancy upto 7% (Joseph et al., 2016; Julie, 1995) in metachronous double primary malignancy. 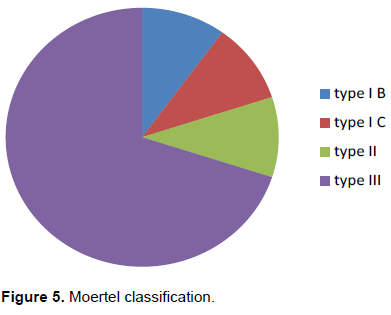 The second malignancy in a metachronous patient is commonly harbored in head and neck cancers (36%) followed by Hodgkin’s lymphoma (26%) (Joseph et al., 2016; Doshi et al., 2017). The currentstudy however showed carcinoma stomach (60%) having a higher incidence followed by pancreas (20%) and soft tissue tumors (20%). Metachronous double primary malignancies are commonly seen in female patients and synchronous tumors have a slight male dominance.This study shows a similarity in metachronous tumors with female dominance (60%) but in synchronous we had female preponderance (60%) and the mean age group in our study is 59 years.

The clinical features that alert the physician to investigating for multiple primary malignancies are atypical metastatic spread, high tumor burden  relative  to tumor marker load, new metastasis several years after the primary, suspicious lesion in patient who underwent prior chemotherapy or radiotherapy and suspicious lesion on imaging (PET-CT) detected at staging or follow up of a tumor (Vogt et al., 2017; Krishnatreya et al., 2013). Most of the synchronouscases are diagnosed while doing a staging investigation for the first tumor. In this study, one case (case 2 in synchronous table) had presented with complaints pertaining to both tumors. In common, practitioners would label this second primary malignancy as a metastasis and leave it behind. Metachronous tumors are most commonly seen in head and neck region due to field cancerization with a latent interval period of 10-15 years (Bagri et al., 2014; Bolognesi and Bolognesi, 2014).This research showed a low latent interval period of 7.2 years with a range of 2 to 11 years.

Prognosis of patients with multiple primary malignancies is poorer when compared to those with a single malignancy(Etiz et al., 2017). Synchronous malignancies in different organs have poor prognosis compared to those in same organ(Joseph et al., 2016). There is no established treatment plan for double primary malignancies. Both tumors are to be thoroughly investigated to rule out the possibility of one being the metastasis of the other and both should be confirmed by histology. Management should be individualized to each case by taking into consideration the stage of disease, performance score of patient, age of patient and survival rate for the tumors individually and other factors. In our study, two cases (1 synchronous, and 1 metachronous) had widespread metastasis and had under palliative therapy.(Di Martino etal., 2002). reported that prognosis of metachronus tumor is better than synchronous tumor.

With the increase in survival rate of common cancers and better diagnostic modalities, the incidence of double primary malignancies has increased. A strong clinical suspicion should be there to detect the second malignancy and should be completely evaluated. A treatment plan should be formulated for each case as resectable  synchronous tumors can be surgically tackled in a single setting. Long term follow up of the patient is necessary to diagnose any metachronous lesions at an early stage. The limitations of this study were the low sample size and a short study period.