Breeding biology and diet of the Madagascar Buzzard Buteo brachypterus in the Bemanevika Protected Area, Madagascar

The breeding biology and diet of the endemic Madagascar Buzzard Buteo brachypterus, in Bemanevika Protected Area, northern Madagascar, was studied in 2017 and 2018. Nest building occurred from early August to early September, egg laying from late August to early October, hatching between September and October and fledging between November and December. Laying peaked in September (n = 24 pairs). Twenty-four breeding pairs were observed of which nine pairs had one-egg clutch and fifteen pairs laid two-egg clutches. Average clutch size was 1.6 ± 0.5 eggs (n = 24 nests). The incubation period averaged 36.2 ± 1.1 days (range 35-38 days, n = 16 nests). Nestling periods averaged 48 ± 3.9 days of age (range 43-56 days, n = 16 nests). Of 39 eggs laid in the 24 breeding attempts, 34 (87.2%) hatched and 22 (64.7%) of those hatchling fledged. This study documented siblicide as cause of breeding failures. Of the 24 fully-documented breeding attempts, 0.91 young fledged per breeding attempt and overall nest success was 79.2%. Based on 515 identified prey items, the Madagascar Buzzards diet was composed of reptiles (37.3%), birds (35%), small mammals (19%), invertebrates (8.3%) and amphibians (0.4%).

The Madagascar Buzzard Buteo brachypterus is an endemic species and fairly common from sea level to 2,300 m, except on the High Plateau (Langrand, 1990). Furthermore, monitoring of common species is important for biodiversity   conservation because they are good indicators of environmental and ecological conditions and are an essential function in the ecosystems (Newton, 1998). Thirty years ago information on the breeding biology and food habits of the Madagascar Buzzard was recorded from a lowland forest on the Masoala Peninsula of northeastern Madagascar (Berkelman, 1996, 1997). To increase knowledge on the Madagascar Buzzard, we conducted a study on the breeding biology and diet of this species at Bemanevika Protected Area (PA), in the northern Madagascar, during two consecutive breeding seasons (2017 and 2018). The aim of this study was to document the breeding season, behaviors, productivity and diet. The results of this study will be used for understanding the health of the ecosystems at Bemanevika PA.

Study area
This study was conducted in and around Bemanevika PA (14°10’ - 14°35’ S 48°25’-48°50’ E), which is located in the District of Bealanana, Sofia Region, in northern Madagascar (Figure 1). Bemanevika PA covers 35,601 ha including a mosaic of large patches of montane rainforest (20,353 ha), four volcanic lakes (158 ha), marshes (601 ha), savannas (14,489 ha) and ranges from 700 m to 1 800 m elevation (The Peregrine Fund,  2014).  In  December 2006, the Critically Endangered Madagascar Pochard Aythya innotata was rediscovery at Bemanevika (Rene de Roland et al., 2007) and in April 2015, Bemanevika became a national Protected Area. This site was also classified as a Ramsar site in 2017 and an important wetland site for conservation of biodiversity (World Wide Fund for Nature, 2017). There are two distinct seasons in Bemanevika PA: the dry season from May to October and a rainy season from November to April. During the two study seasons, the annual average rainfall at Bemanevika Field Station was 2707.5 mm. The monthly temperatures averaged in July and November were respectively 14.7 and 20.4°C, with an annual average of 18.5°C (The Peregrine Fund, 2020). Bemanevika PA was chosen as study area to collect information at different elevation across the natural range of Madagascar Buzzard. It differs in being a high elevation rainforest compared to the coastal lowland rainforest of Masoala National Park where the last study of this hawk was conducted thirty years ago.
Data collection
Fieldwork was carried out from July to January during the 2017 and 2018 breeding seasons. During July and September, we searched for individuals and nesting pairs in forest fragments and blocks by direct observations using   transect lines. At every 100 m, we stopped for 10 to 15 min to listen and search for hawks for nesting behavior (Watson, 1992). We noted all individuals found or heard and followed them to observed their behaviour and locate a suspected nesting territory. We also systematically searched all habitat suspected to hold a nesting pair (Pruvot et al., 2017). Nesting pairs were located and monitored during the two study seasons. Breeding season parameters: including nest building, egg-laying, incubation, hatching, nestling and fledging periods and breeding behaviour were determined from daily observations. Observations were made from 30-50 m from the nest with 8-10x power binoculars. When a pair was determined to be incubating, nests were climbed to recorded egg dimensions (length and width) by vernier caliper and mass with Pesola spring balance scales. During the nestling period, we described the development of young from direct observations and using trail cameras.
To identify prey items, trail cameras were used to ensure continuous sampling during the day (Trollier et al., 2014). Three trail cameras were used at five nests with two-egg clutches per breeding season. Two cameras recorded photos and one recorded videos. Trail cameras were fixed on branches about 2 m above the nest and recorded 24 h a day. To facilitate data analysis, nests and corresponding nesting pairs were coded by order of discovery and year of study: Ni/Pi-17 or Ni/Pi- 18 with N as the nest, P as the nesting pair and i is the order of discovery of the nest and 17/18 is the year.
Data analysis
Egg dimensions were calculated as mean values and standard deviations from measurements taken. A chi-square test (Fowler and Cohen, 1985; Johnson, 1992) was used to compare the quantity of food delivered to nestlings by both sexes. This test was also used to determine if the quantity of each type of prey varied during the breeding seasons. Statistical analysis was performed with STATISTICA 6.0 (StatSoft, Tulsa, OK, USA). 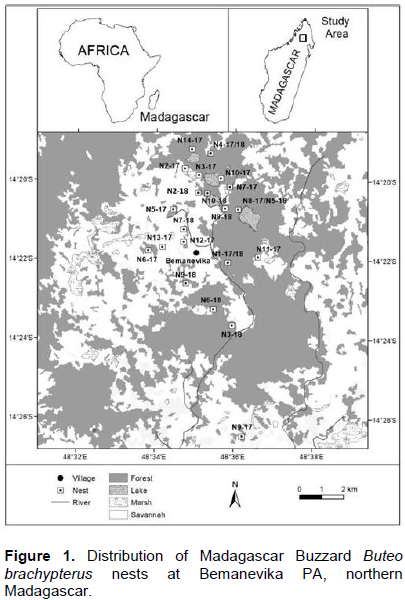 The study was focused on the breeding biology and diet of Buteo brachypterus, an endemic raptor of Madagascar, during two breeding seasons 2017 and 2018, in the montane rainforest of  Bemanevika  Protected  Area. This study highlighted the trail camera as an efficient method for research in biology of raptors. We documented new information on several aspects of biology and ecology of this raptor species, especially regarding its diets and siblicide behaviour. We recorded 24 nesting attempts including nine nests located at the forest edge and fifteen in the forest interior. The breeding period lasted at least six months, from the last week of July to mid-January. The clutch size was from one to two eggs. Of 24 nests attempts, nine were with a one egg- clutch and 15 were with two egg-clutches. Breeding productivity of B. brachypterus ranged between 0.78 and 1.1 young fledged for the two breeding seasons. Three factors were determined for breeding failures: predation, siblicide and female persecuted for food by local villagers. We reported an evolutionary breeding system called facultative siblicide occurs in the Madagascar Buzzard. This study was the first case of this occurrence of siblicide followed by cannibalism in the Madagascar Buzzard. Food habits identified chameleons, birds, lemurs, rats, snakes and amphibians as the source of food for this raptor. Our study is consistent with other results that B. brachypterus is a dietary generalist with chameleons and birds the most frequent prey taken. This was the first study of the Madagascar Buzzards at Bemanevika PA, even though the data reported the buzzards were successfully in fledging 0.9 young per nesting attempt, we recommend further studies to understand more about siblicide in this species, in other raptors in the study area and in other regions of Madagascar. It is important to elucidate more on this species’ reproductive strategy and the mechanisms that regulates its population, it is important to assess their population size and ranging behavior during the non- breeding  and  breeding  periods, and  to  determine  their distribution and global status.

This study was supported by The Peregrine Fund’s Madagascar Project with funding provided, in part, by the Helmsley Foundation and thanks to the Bemanevika Protected Area technicians of The Peregrine Fund for their assistance in data collection in the field.